It seems like the summer on the Canaries was the summer of injuries. First it was young Loick Lesauvage who injured his ankle after his first round heat in the double elimination of the Gran Canaria Wind & Waves Festival. He slipped with his foot in between the rocks and twisted his foot and was not able to compete anymore. Luckily the injury was not too bad and he was back on the water for the event in Tenerife.

Next stop was the PWA event in Fuerteventura, where Yentel Caers and Balz Müller got injured during the PWA freestyle competition. The Belgian freestyle windsurfer Yentel Caers injured his foot during a Shifty landing in the heat against Jacopo Testa and had to withdraw from the competition, although he won his double elimination heat against Jacopo Testa. “I got some small cracks in the muscles. Because the two bones, in my leg went apart a bit. At the end of August I already started sailing, but just low pressure moves,” Yentel told us. By now Yentel is fit and ready for the rest of the season. 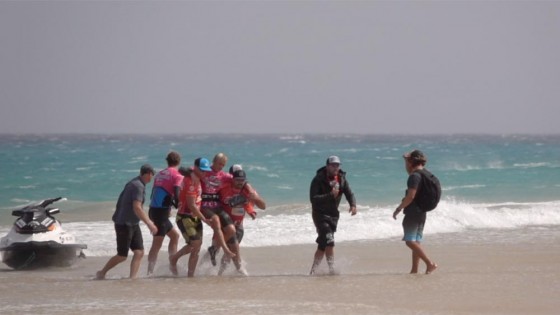 Balz Müller overstretched his hamstrings in his heat against Taty Frans during the freestyle competition in Fuerteventura. We asked Balz how he is doing right now:
My knee is getting better after I heavily overstretched my hamstrings in my heat against Taty Frans at the PWA event in Fuerteventura. I had to take it easy afterwards and used the freestyle break to get used to foil windsurfing. Last week I took my freestyle board again but unfortunately I twisted my knee during the second move and had to switch back to my foil board. I am now a bit scared to forget how to freestyle until the next PWA event in Sylt;-). But my job as a landscape gardener is keeping me fit and helps to stabilize my knee again, and also foiling helps me a lot to stay in shape physically and mentally. But I really hope that the first heavy autumn storms will arrive soon, to be able to get on my freestyle board again, otherwise I see trouble ahead for Sylt.
Honestly I feel a bit burnt out from windsurfing right now. Unfortunately I do not get the needed support from my equipment sponsors I had hoped for. I wish I could live from windsurfing one day, even when it is only for a short period. But when a 6th place overall and okay social media work is not enough, I get a bit frustrated. But anyway I am more motivated than ever to hit the water and “Try Harder” to achieve my dream even I know I need to make more office work in which I really suck… I just feel that I have not enough time for windsurfing. Everything could be so easy…with more time on the water I would get better. But how can you improve in windsurfing, if you have to work for 9h per day? This makes me really sad at the moment. But every windsurfing session is good for the spirit and balsam for my soul, like today during lunchbreak: 15 minutes of foiling and 15min to swim back as the wind died completely.

Ethan Westera, Taty Frans and Pierre Mortefon got injured during the Slalom competition in Fuerteventura. Ethan and Taty had contacts with the razor-sharp slalom fins. Ethan got t-boned by another slalom sailor during a jibe, both fell and the fin cut Ethan’s lower leg. The cut was pretty deep and he had many carbon splints in the wound. He was brought to the hospital and needed to undergo surgery in Fuerteventura. Unfortunately Ethan has still problems with his wound, because it is not closing.

Visited the hospital today. Plastic surgeon said that it was the best to wait another week again.. We got a new cream to put on the wound and showering everyday is a must. No bacterias spotted on the wound and it's closing nice and slow. Still no walking ? for me. Next week another opportunity ? #teamgaastra #gasails #pwaworldtour #BeInspired #fhotfins #worldofwindsurf #wowteamrider #windsurfingtv #continentseven #lovegaastra #teamtabou #tabouboards #lovetabou #theroadtothetop #livingthedream 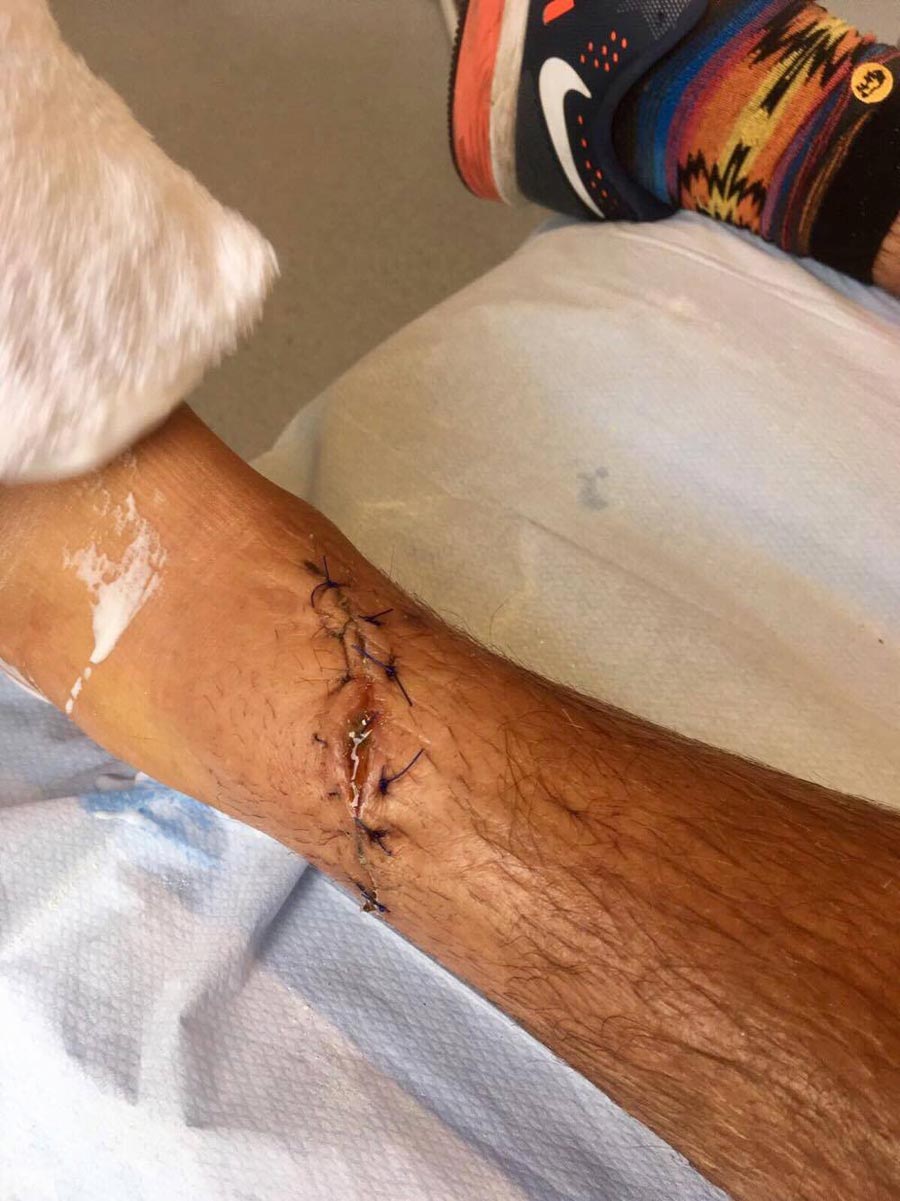 Ethan Westera:
A few weeks have passed after my incident in PWA Fuerteventura. My accident turned out to be pretty serious cutting all my tendons from my left foot. During the whole process of this I didn’t really have pain. It’s just so frustrating to not be able to do something after doing so much all these past years. But I’m doing fine. I’m currently in Holland rehabilitating. I decided to stay in Holland, because in Holland they are much more organized and specialised than on Aruba in these matters. I am here also because I couldn’t fly back to Aruba. I would be 10 hours on a plane and that wouldn’t have been good.
I have been to hospital many times already, I have been taking antibiotics for four weeks already, I have had a cast for 2 weeks and I have had my stitches out. Currently I’m walking with a cast that you can remove and use again. I still didn’t put any pressure on my left leg since the accident (can’t walk). Somehow I’m still not in the physio phase, because I still have my cut a bit open. The doctors left this a bit open to prevent infection from the carbon and other weird stuff that is in my cut. Two visits ago the doctors found out that my tendon was sticking a bit out right at my cut! So another problem to solve… They tried opening the cut more to let it bleed and start healing again. They took a stitch out that was in my cut and they took dead tissue out from my tendon to start healing again and they cleaned it. Now I’m just currently in a waiting period. Just waiting to let everything close and heal, so that I can start trying to walk and go to the physio. If everything turns out a bit okay I will be trying to walk again in 3-4 weeks.
I’m keeping myself busy with schoolwork, doing some fitness and working on my image. Something different than the usual. Thanks everyone for the great support! I appreciate it a lot!

The other slalom victims were Taty Frans and Pierre Mortefon. Taty arrived with incredible high speed and ran into Pierre Mortefon. Pierre catapulted very hard, his board flipped and Taty fell with the back of his thigh on Pierre’s fin. 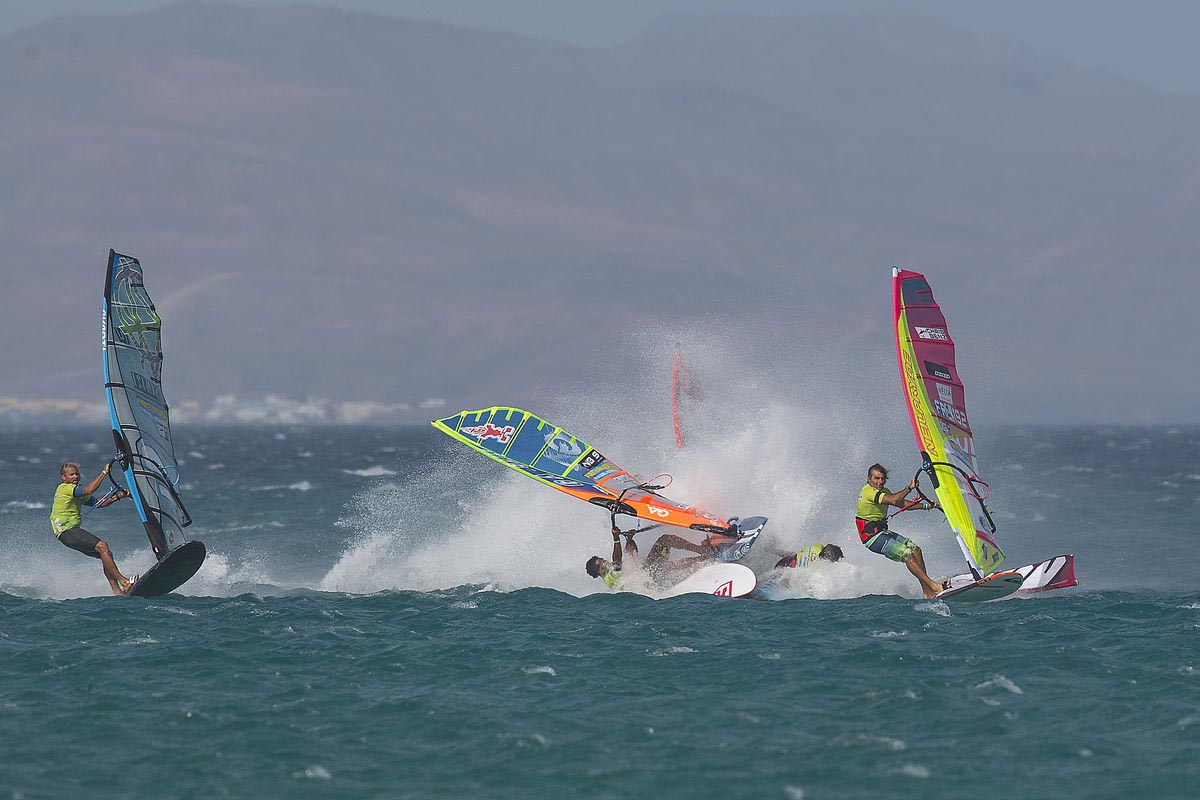 Taty was brought to the hospital and his cut got stitched up. Pierre had more luck in his misfortune. Back in Bonaire Taty needed to undergo surgery to prevent a severe blood infection and the surgeon drained 0,5 liter of dirty blood/moisture from the wound. The surgeon said Taty was pretty lucky the fin didn’t went further in, as the depth of the cut was 10cm. By now Taty is back in the gym and can walk again.

Taty Frans:
It’s been a 1,5 months after the injury. Since the 14th of August everything is going in the right direction. The blood infection has been treated and I am finally pain free. The wound is healing properly and according to the surgeon and doctors I am recovering faster then they thought. I have a weekly check up at the surgeon, 2x a week therapy and I just started a 2x a week personal fitness workout. According to the therapist the muscles are getting better and she thinks I might be able to get on the board in about 1-2 weeks. Just in time for Sylt but I think that’s too early so I won’t risk it. I can finally add some pressure on the leg and I can walk, so it’s getting better. I am happy that I see progress every day and week.

Pierre Mortefon:
I recovered 100%. When I came back to France after the event in Fuerteventura I had some pain in my right foot and my back (cervical and lower back). I worked with my usual doctor and physio and around August 10 everything was all right. I can go back to the gym and sail normally after this small break. The story is now behind me and I am just looking forward to the rest of the season!

Unfortunately the streak of bad luck for the PWA windsurfers wasn’t over after the event in Fuerteventura. Daida Moreno injured her ribs during a Back loop landing at the competition in Tenerife, which led to her having to withdraw from the contest.

Daida Moreno:
I’ve dislocated some ribs and damaged the tissue of that one and muscles around. It’s a complicated injury that takes time to recover, but working daily on it with exercises and physiotherapy. I couldn’t walk straight or breath properly for one week but I started swimming, biking and running and feeling much better already. I even tried windsurfing 16 days after the injury but was too early and too painful. Still need to be out of the water but keeping fit with functional training, running, biking and swimming. Hope to be ok for Sylt! 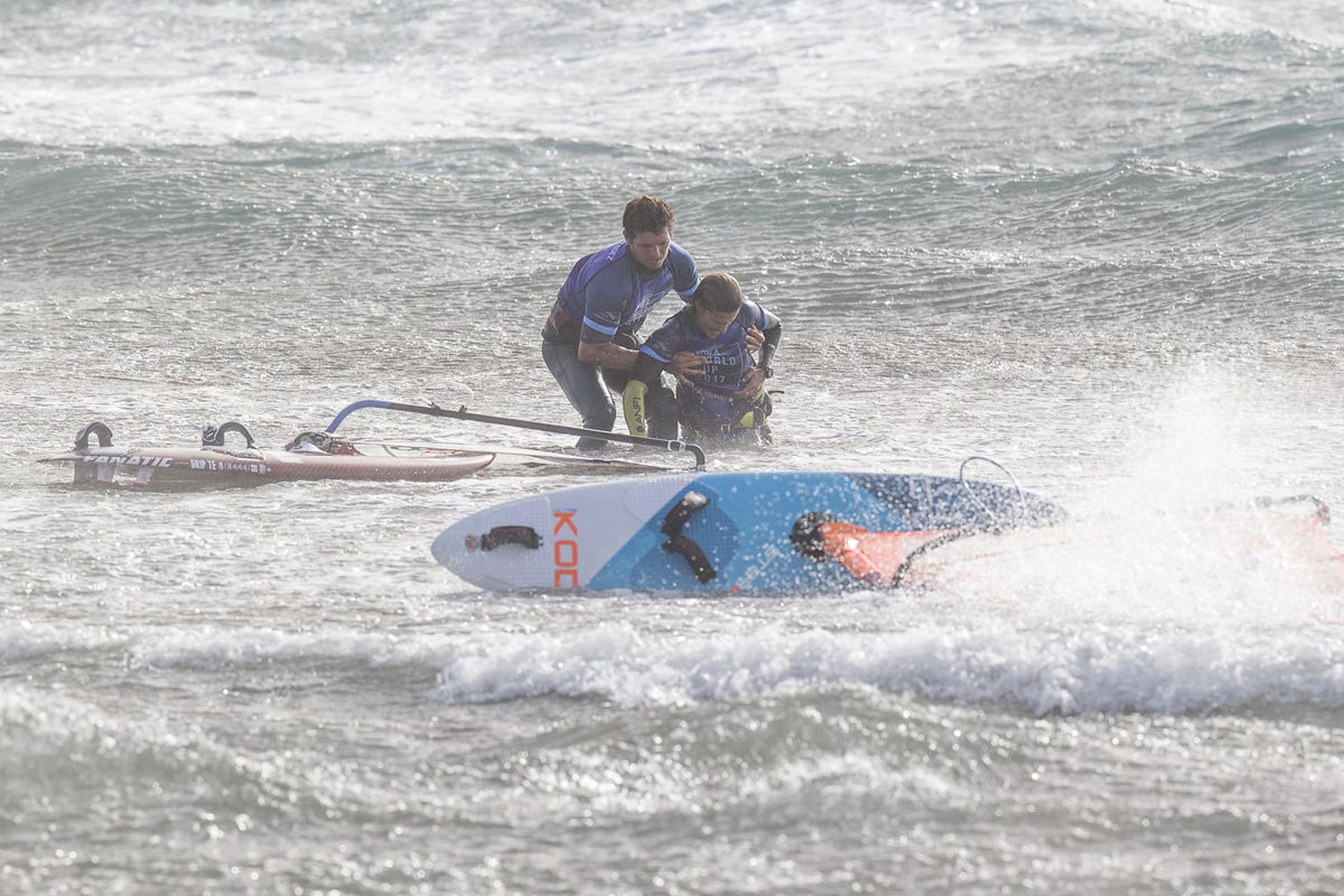 And Dieter van der Eyken got knee problems during the event in Tenerife due to an old knee injury.

Dieter van der Eyken:
Over the winter I twisted my left knee after under-rotating a tweaked Push loop during my second week of the trip. After resting it for about 5 days and doing some exercises I got from Jaeger Stone I was able to start sailing again slowly with a knee brace. I took some steps back from jumping and went for more wave rides which didn’t give me pain. Over the winter it healed pretty good giving me no problems with it anymore till I did the same just a week before the Tenerife event in Vargas. I rotated through an Airbob Culo from a wave and had my body weight to far back. I landed with all my weight on the left knee again and could straight away feel similar pain. Luckily for me the conditions for Tenerife didn’t kick in till the second part of the contest and this gave me enough rest to sail without the knee bothering me to much. Now at home I’m doing physio therapy to get the knee back to 100% by Sylt, as it won’t heal by just resting it. Luckily for me I can keep sailing and it’s just a matter of time before it’s back to 100%.

We hope everybody will be back to 100% very soon!

Hi Balz, I know the situation does not seem to be easy for professional freestyle windsurfers these days. Try to keep it up.

Get well and take it easy. Hope to see everyone in Sylt!