Dax Barker is a 13 year-old boy, born in California and living in Maui, Hawaii. He likes windsurfing and surfing, but what he likes even more is to take pictures, to film or edit movies. He already follows a career as an artist at his young age and was invited to display his work at an art exhibition in San Jose, California together with 299 other artists.

Dax is pretty active in windsurfing, too and produced several videos about his friends Jake Schettewi or the German windsurfer Henri Kohlberg. We were impressed about his video work and we wanted to find out more about Dax and his story. We are sure he will continue producing windsurfing movies and learn day by day. Living on Maui is probably the best basis for his projects.

“Dax spends most days and nights either behind the camera or at the computer editing. I think this dedication combined with his passion makes him so good at what he does.”
(Jake Schettewi) 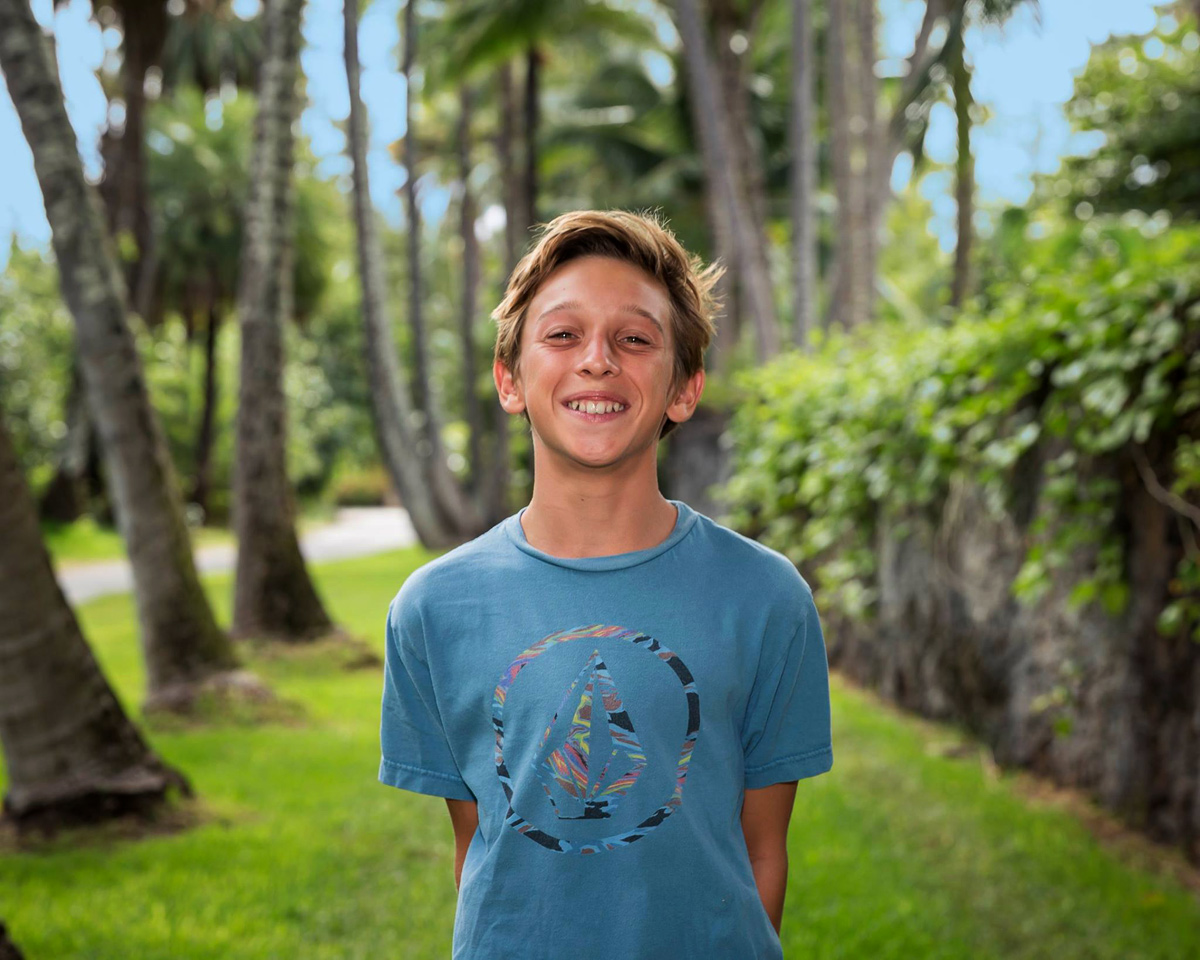 Jeff Henderson: „Dax came into my life 11 years ago and I have made every effort to raise him as my son. He has always had an artistic talent and I have tried to nurture this since he was very young. His journey from painting, sculpture and pen and ink to photography has been a natural one. His editing skills and patience though have been the biggest surprise to me. He can work for hours on end without a break. On the water he has overcome fears and become a great little waterman and now his confidence in the ocean can be seen from both his sailing and his surf images.“ 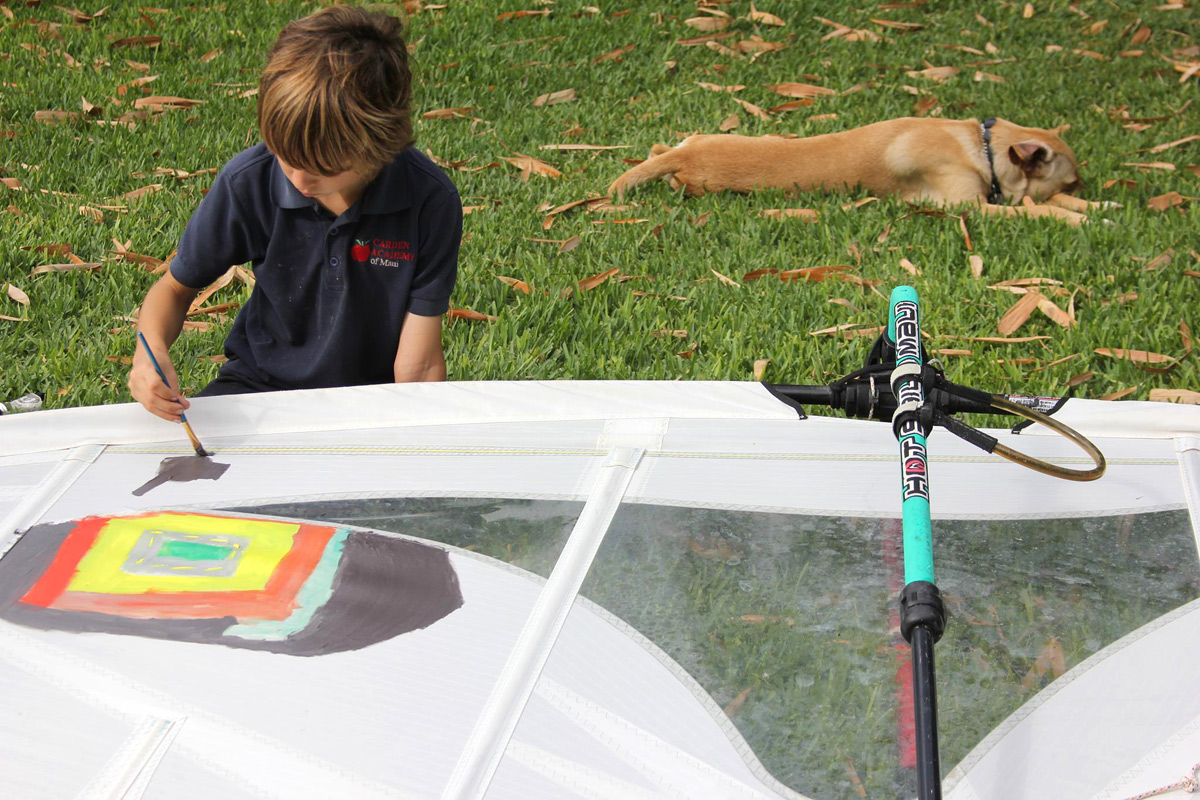 Who is Dax Barker – Interview

Continentseven: When and how did you start windsurfing?

Dax: I started in front of my house, and my dad taught me how to start sailing about 7 years ago.

Continentseven: How does an average day in your life look like?

Dax: I wake up, go to school, get home and if it’s windy either go to Ho’okipa to film, or sail at my house.

Dax: I just learned how to do a Back loop and now that’s my favorite move. And I like the original Windsurfing Movie that Jace Panabianco made. 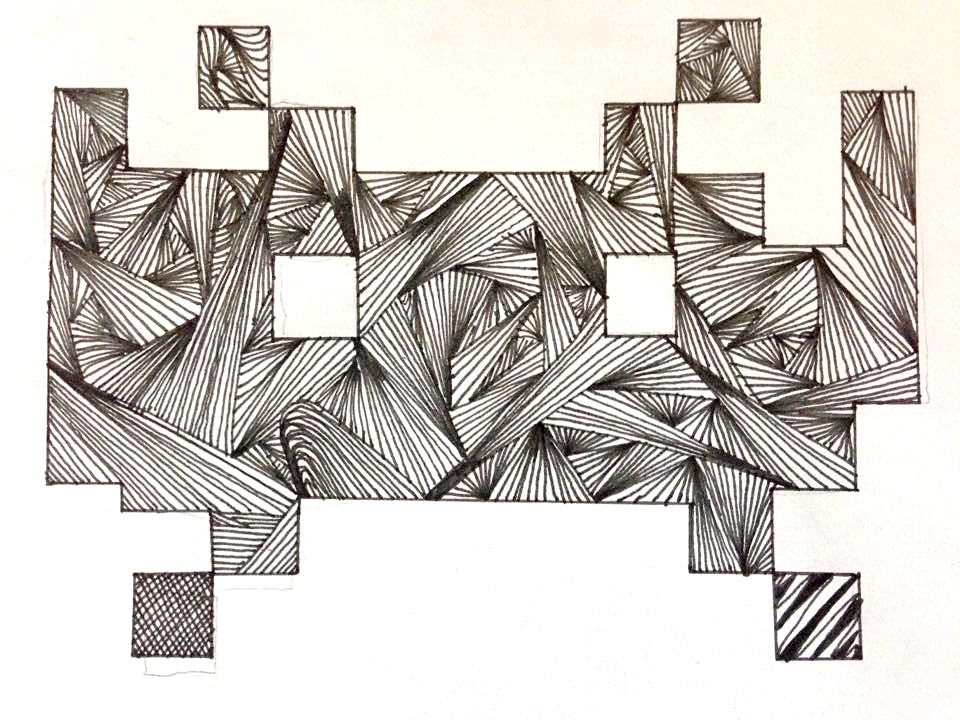 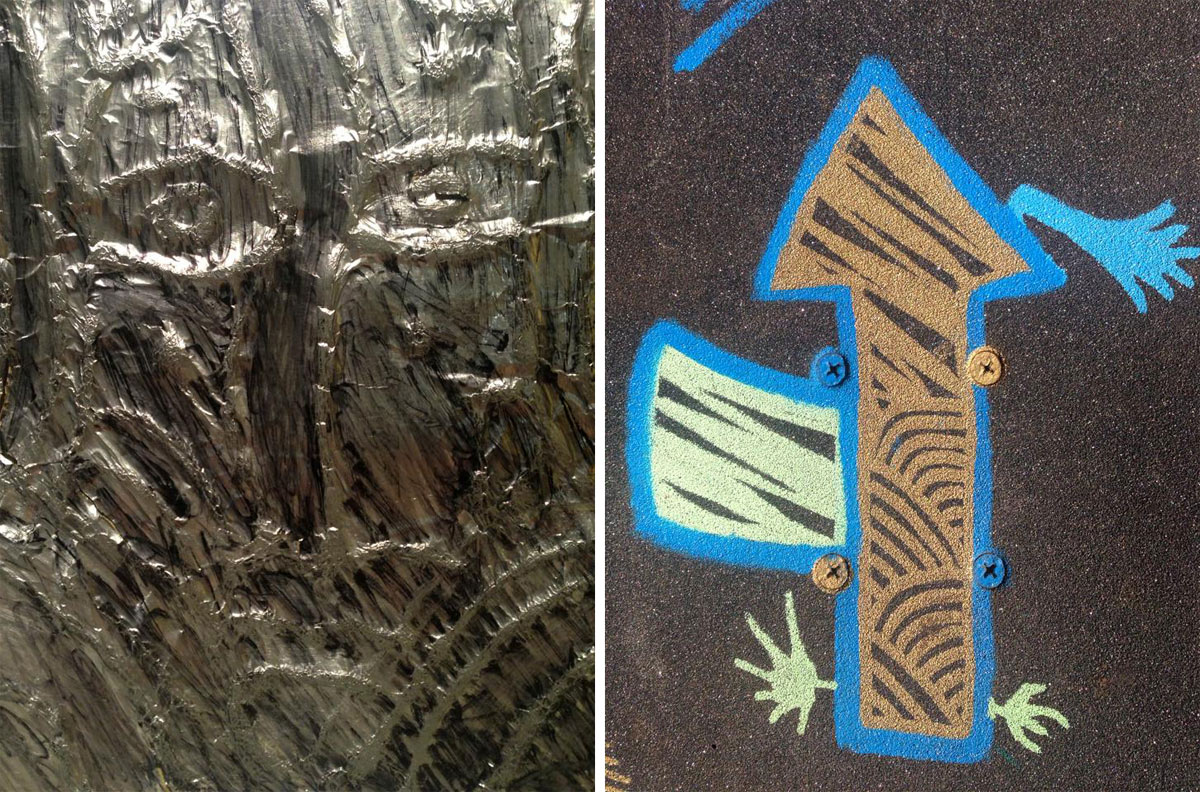 A sculpture and a skateboard deck tape design by Dax Barker

Continentseven: You are 13 years old, still very young and you already produced short films about Jake Schettewi or Henri Kolberg. How did you get into making films?

Dax: I started to film at Paia youth and cultural center and from there I started to film at places like my house and Ho’okipa more. I self taught myself most of the stuff I know or watched tutorials on YouTube. I get motivated by seeing what I can shoot when I’m filming and learning new things.

Continentseven: Filming and editing is a relatively costly hobby and windsurfing, too. Do you get any support from your parents to do all these exclusive hobbies?

Dax: My parents will help me buy my camera gear. And my dad buys all my windsurfing gear. I also make money off of filming.

“It is cool that Dax is not just a filmer, but also a windsurfer. He understands what shots to take and what is important to look at. It’s also a lot of fun windsurfing when he is in the water.”
(Henri Kolberg) 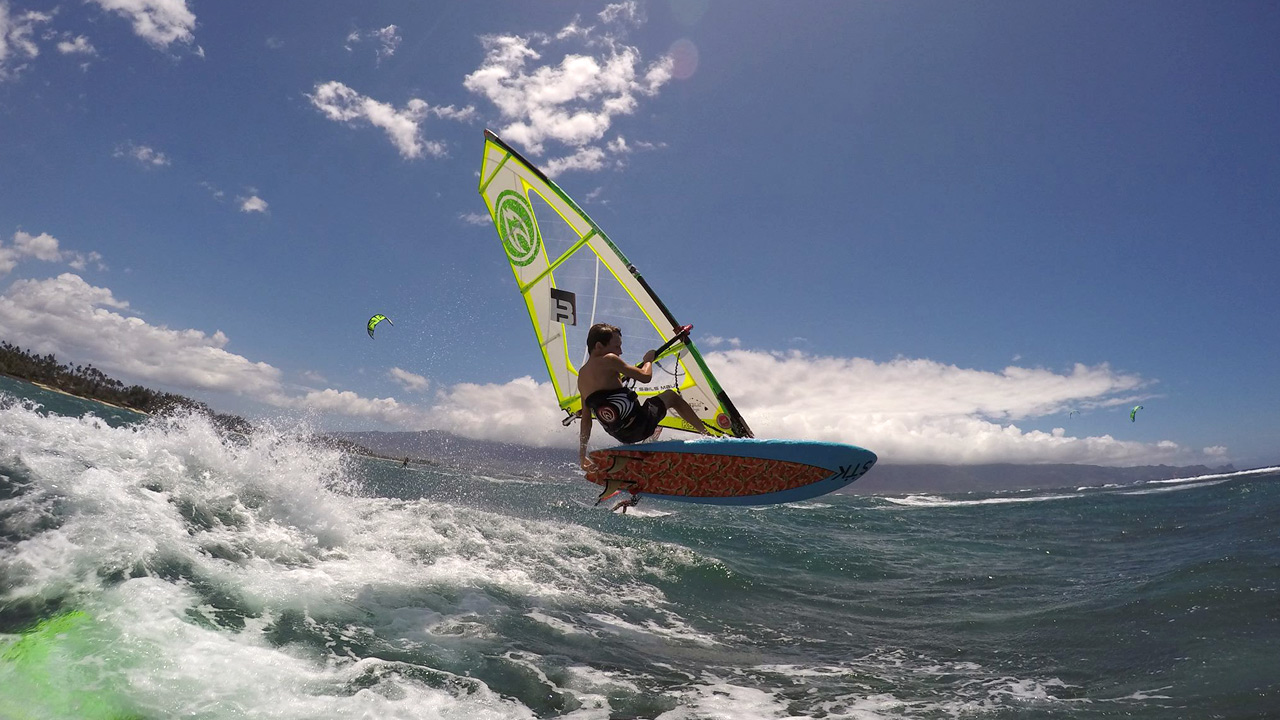 Dax Barker jumps over a wave on Maui

Continentseven: What camera equipment are you using?

Continentsven: You are probably the youngest film maker in the windsurfing scene. Are you proud on that. What are your next goals and films?

Dax: I am proud that I am so young and already doing something I love. I hope to be making films in the upcoming years. 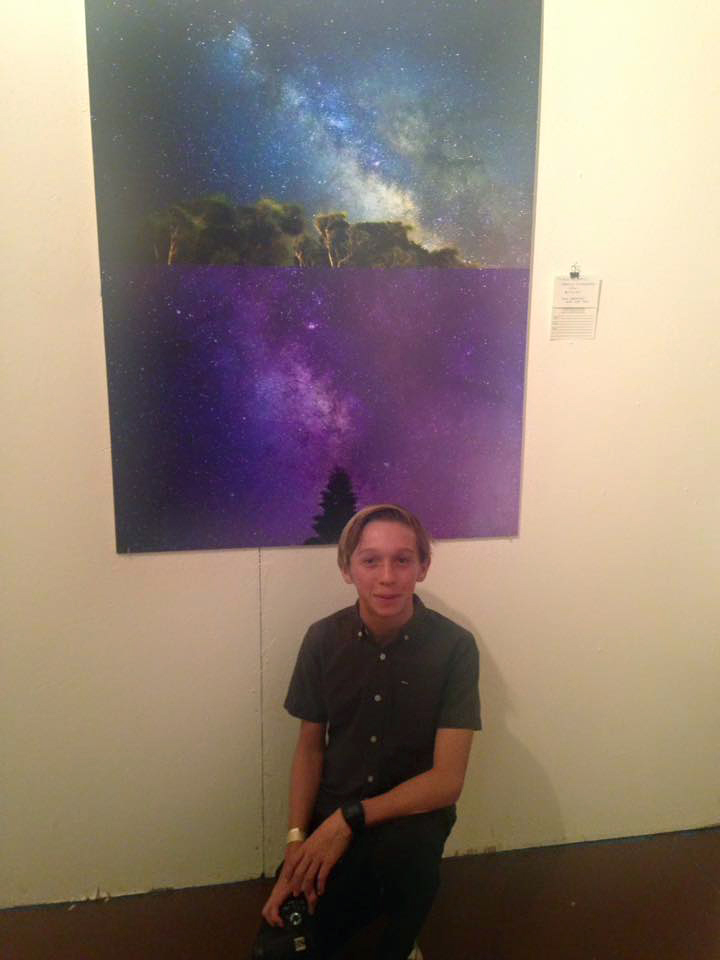 Dax presents his work at an exhibition

Continentseven: Do you have any idols in windsurfing and in film making?

Dax: I look up to my dad in windsurfing. And there’s a lot of people that inspire me in filmmaking.

Continentseven: Imagine, the conditions are brilliant at Ho’okipa and you can’t make it on the water because you have an appointment for a film production. Will you get angry or do you like producing videos more than windsurfing?

Dax: I would rather film at Ho’okipa than sail. I would not be angry.

Continentseven: What do you like besides windsurfing and film making?

Continentseven: Where do you see yourself in 5 years from now? Windsurfing pro or pro film maker or both?

Dax: I hope in 5 years I will be traveling, and filming windsurfing. I would rather be a pro film maker than a pro windsurfer.

Congratulations young man! We sure love to see technically excellent images combined with action and an artistic flavour to it. You have all your life ahead of you to live your dream and enjoy what you do. And make us dream of being where you are. Good job!!