It took a while before the four PWA Sailors and champions of the tiny little village of El Yaque in Venezuela, five times Freestyle Worldchampion Gollito Estredo, three times Freestyle Worldchampion Ricardo Campello, vice worldchampion 2010 Yoli de Brendt and vice worldchampion 2005 Cheo Diaz opened the doors into their lives, to make an amazing story for Javier Chuecos possible. Javier Chuecos is a filmmaker and the director of the movie “El Yaque,Pueblo de Campeones (Village of Champions)”. It took him and the crew 4 years of filming, travelling, waiting plus 2 more years of editing and postproduction to finally present an awsome high quality product, in 5.1 Dolby surround sound and its own soundtrack 4 velas (4 sails) by Javier Weyler. Listen to the sound, it’s excellent. 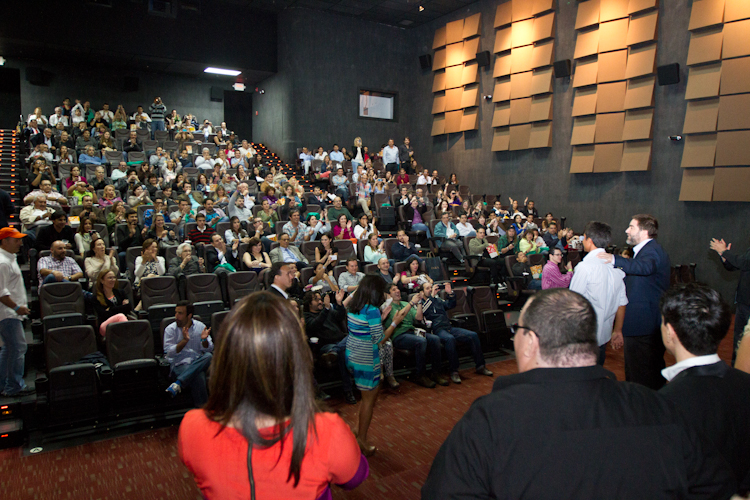 Full house at a cinema in Caracas – Pic: Tom Brendt 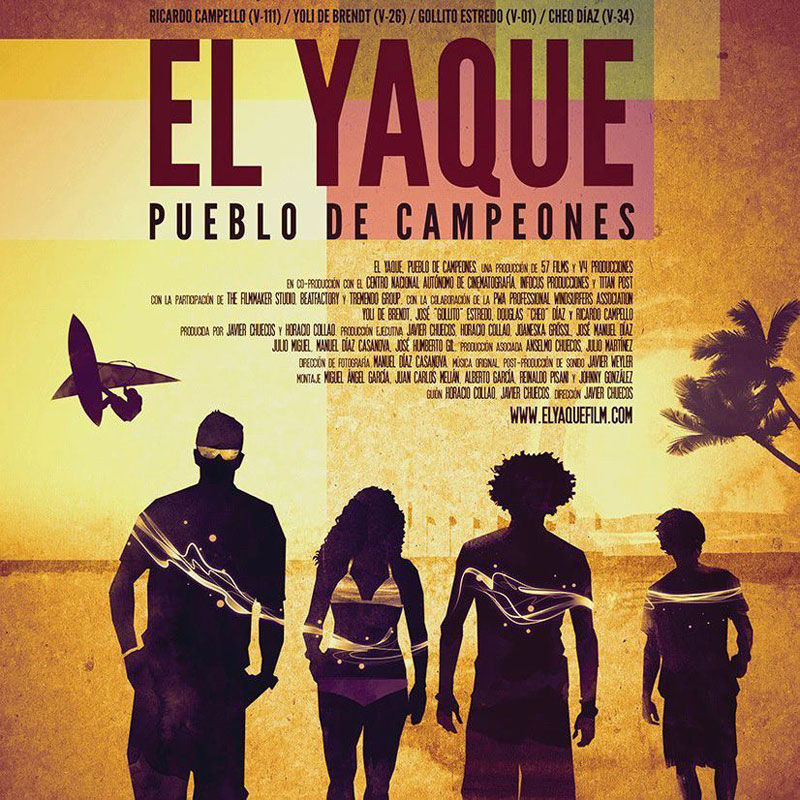 The movie had its premiere in 15 cinemas in Venezuela on February 8th 2013. The pre-premiere saw 1500 guests in 8 cinema showrooms at the same time and since that day the positive hype around the movie in Venezuela seems to be unstoppable.

The 75 minute documentary tells the roller coaster story of 4 totally different characters, coming from the small fishermen village El Yaque on the Isla de Margarita. The movie shows four years of ups and downs, grief and glory, sadness and happiness, very intimate moments, laughter and tears, telling messages with major impact, holding the Venezuelan flag up, the flag of their country, where they are born and winning trophies. But in the end they get less support for their success.

Dircetor Javier Chuecos travelled toegther with his cameramen and executive producers Manuel and Jose Manuel Diaz Casanova and Julio Miguel around the world, followed the PWA Events, together with the four El Yaque characters, became friends, even kind of the family or as Cheo Diaz said: “They became Venezuela for us, to come up with an astonishing piece of a movie.” 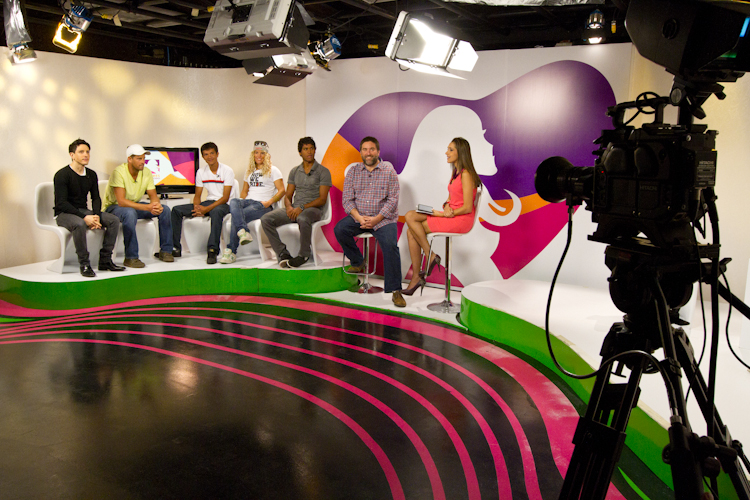 The 4 movie stars and the filmcrew in a Venezuelan TV show – Pic: Tom Brendt

How do you feel watching yourself on the big cinema screen and knowing that so many others will do the same ?

Cheo: I feel really pleased knowing that finally our country Venezuela will get to know our stories and achievements.

What are the reactions of people, who have seen the movie towards you?

Cheo: The reaction is actually that they leave the cinema happy about our occurrences and are thankful that we’ve held up high the Venezuelan flag during all the years. 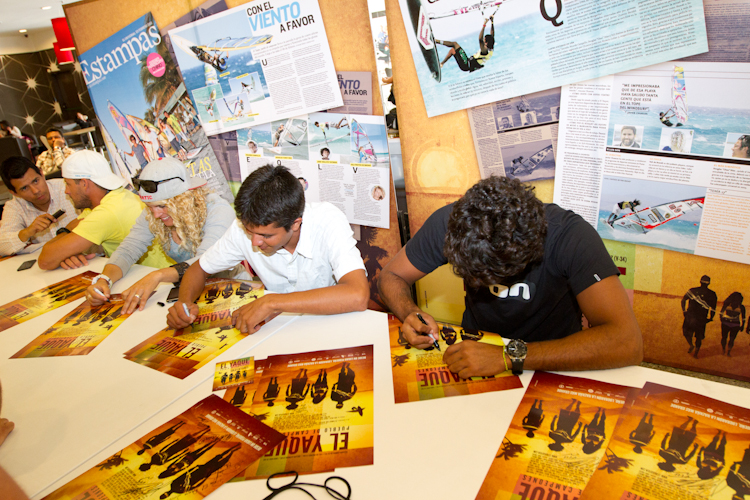 Signing posters, an exciting moments for Cheo and his friends – Pic: Tom Brendt

How do you see your part in the movie, as it seems you’re the one people talk about most when they leave the cinema?

Cheo: Actually I don’t know if I am or if I’m not the person people talk about most. The things I always notice are that people can’t believe, that there are four big talents, doing everything for their country, keeping on to bring trophies back home and the government and private companies don’t even take notice about them. And I of course notice, that they experience the movie really motivating.

Did the movie help you already in any way?

Cheo: Well, I still haven´t signed any contracts, but there are already many people, who want to support us, but mostly, as we know from the past, there is a lot of talking and never anything fixed.

How was it working with this production crew?

Cheo: It has been really good all the time, everything was perfectly coordinated. Just everyone put his part into the project and I am really grateful therefore.

How do you see your future in this sport ?

Cheo: To be honest, I really don’t know! It’s my dedication, but still without any sponsors it is too hard to travel and make my living.

How do you feel watching yourself on the big cinema screen and knowing that so many others will do the same?

Yoli de Brendt: I am really excited and happy that thousands of Venezuelans can finally see in the cinema what windsurfing is and especially what it means to each one of us and really thankful to all those, who made this great project possible and also fort he huge acceptance the movie receives not only in Venezuela.

What are the reactions of people, who have seen the movie towards you?

Yoli de Brendt: The reactions have been pretty much unbelievable so far, each second, minute, hour, day. We receive messages and tweets, people thank us for this movie and congratulate not only about the movie, but about the value and admiration we achieved outside Venezuela and that we managed to send this huge message into the world.

How do you see your part in the movie, the woman that left her secure job to follow her dreams?

Yoli de Brendt: Each time I had the chance to see the movie at festivals or now in the cinemas I repeat myself, saying that if I would be in the same situation again, I would do the same over and over again, for my sport, for windsurfing. The sport changed my life! I don’t only thank god, but also the companies, which have supported me from the beginning on like Fanatic, NorthSails, ION, Chocofins, Dwarf8 and Windsurflabor. Without them it wouldn’t have been possible to achieve what I have achieved so far and what is still coming ahead. And of course without the help of my family and friends I would not be in that place right now.

Who sends you more messages right now after the movie, men or women?

Yoli de Brendt: Actually that’s pretty much equal. I always had the support of men and women, who love the sport and follow our careers and the PWA worldtour.

How was the work with this production crew?

Yoli de Brendt: Just one word, excellent! They are people with lots of patience and they always found the right touch when it came to the interviews during our most difficult moments in life, moments of sadness, frustration, anger, pain and grief, but also during the most happy moments. They also became more than a crew filming us. They became a kind of a family with all the support towards us, being there with us all the time to tell our story now in the movie “El Yaque Pueblo de Campeones”.

How do you see your future in the sport and the sport itself and what’s about the Kids of El Yaque ?

Yoli de Brendt: As long as god and the Virgen del Valle give me the strength and power, and my sponsors the trust in me, I will be there, trying to get better. But above all stands promoting and pushing our sport, to Kids, teens, adults and to the whole world if possible, not only in competitions but also at events, festivals and clinics, or at the cinema like right now. I think this movie will open doors for the next generation in El Yaque and not only because they might receive a bit more support from the community or / and the government, but also that they can see that they can achieve anything in life. It just needs dedication, constancy, effort, work, responsibility and heart ….

El Yaque – Pueblo de Campeones celebrated its premiere on February 8th 2013. How did you feel knowing that the Venezuelans now enter a cinema to watch Gollito Estredo instead of James Bond ?

Gollito Estredo: It is really a big satisfaction and kind of happiness that my country Venezuela finally will get to know me, my life and all the things I had to go through to finally end up where I am now and of course that I am always representing our country.

How was the reaction of those, who have seen the movie, the trailer or just heard the stories about the movie until now?

Gollito Estredo: The reactions of those, who have already seen the movie were amazing, with a touch of sadness at a time, that no one in our country knew about our talents and achievements before. 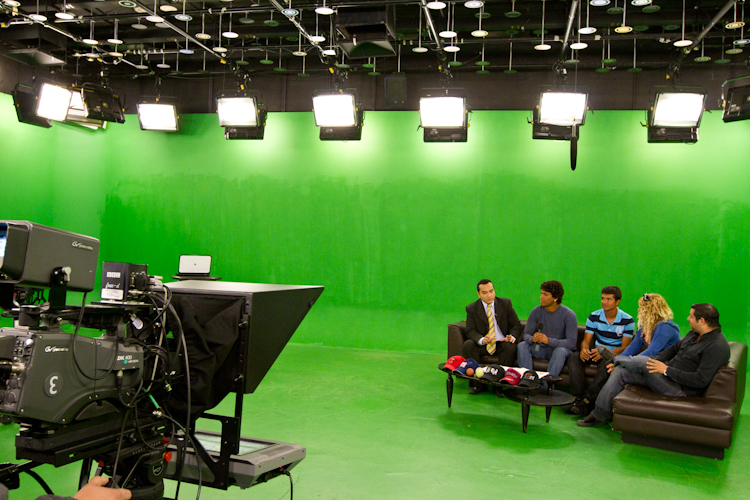 How do you see your part in the movie, as the people talk a lot about the beauty of Yoli, the sad story of Cheo and the big achievements of Ricardo and yourself ?

Gollito Estredo: My part has been sad, strong, emotional and funny. All our achievements came after a long time of hard work and lots of very difficult situation I had to handle and get over.

How was your work with the production crew?

Gollito Estredo: In the beginning it wasn’t easy at all for me, as I am kind of shy to new things in the beginning, but after a while and till today it has become just excellent and great.

You think your life might change after this movie, why?

Gollito Estredo: Of course, because from now on I know I will have the moral support of my country, of the Venezuelans which I never had before. This will make me feel much better and even more motivated to win more competitions and more championchips.

Are you proud to be on the big screen ? Or how do you feel with this movie project?

Ricardo Campello: Yes, actually I feel really happy about appearing at the big cinema screens and that finally the country, the people will get to know that we won 9 worldchampion titles in windsurfing. And I am happy that the public people realize that there are many more sports than Baseball and Football and there are many more talents in Venezuela.  Many people think or thought that we compete on a junior or amateur level, which is not really the fact! The movie will clear up things a bit.

How did you feel during the big premiere in the capital Caracas, with this huge amount of people, where the movie got presented in 8 cinema show rooms at the same time.

Ricardo Campello:  There were really a lot of people, like 1500 persons, all my friends, family and lots of media members and all of them were super happy with the movie and this entire project. 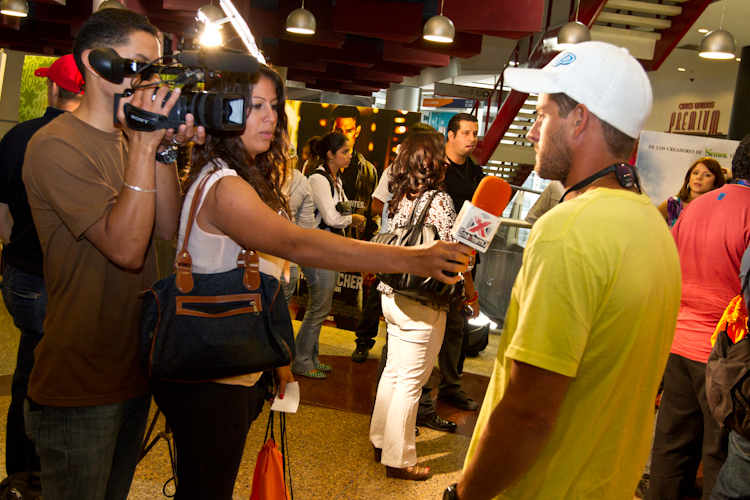 How was the work with the production team?

Ricardo Campello:  They were absolutely excellent, we really became kind of a family, very charismatic people. Some were unknown for us and most we knew already and were already friends before and I am really grateful to every single one of them.

The internet filled up quickly with comments about the four of you. Would you have expected that before the premiere of the movie?

Ricardo Campello: I haven’t heard or read a single negative comment about the documentary and this is really unbelievable and we are absolutely achieving what we were hoping for.

How do you think your life might change after all this?

Ricardo Campello: I don’t know. Actually I hope it doesn’t change too much, but that our country, the Venezuelan government, people, companies will be there for us and support us in the future!

What is the most impressive part of this whole project for you?

Ricardo Campello: The most impressive part is that we all managed to realize this project without any financial support or help of nobody and that it all was done with a lot of enthusiasm and every single one put his little sand grain to make the project work.

Does Cheo still windsurfing? Would be great to see him again. I was wondering, how quick he disapeared from the scene. Why? What’s up with him?