Balz Müller’s mind is restless and constantly thinking about windsurfing moves. The Swiss windsurfer has been working on switch rotations lately and he sent us this switch stance Backloop attempt, which he calls Swackloop.

Some might say it looks like an Air Tack?
Balz: “The main difference to an Air Tack is for sure the take off as I’m trying to stall the jump like a regular stance Back loop instead of throwing the gear straight upwind. Further in the air I’m trying to control the spin and landing like a Kono rotation and landing it in switchstance downwind on the tail,” Balz said.

Do you think you can make the full rotation in the air and do a nose landing, soon?
“I’m not sure sure about the switch Back loop noselanding, but I guess it isn’t impossible. All those switch stance back rotations are offering so many different options, like: switch clew first Backloops / switch Pushloops / switch Crazy Pete’s/ switch Backloop into Eslider and then all of them with options of the “Air Skopu reverse” spins in the air. All we need is some time to figure out how we gonna land them.”

Thanks to Adam Sims for capturing it. 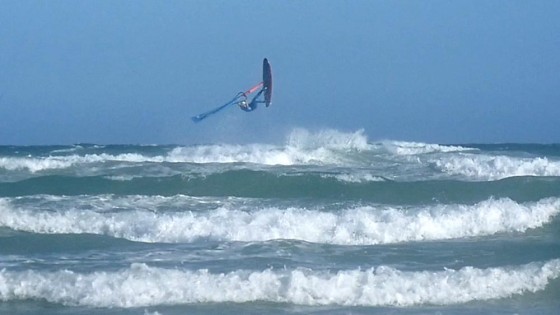 Wasn’t there a video of Victor Fernandez or one of the Canary Island windsurfers performing a switch backie a few years ago?

This is by far a switch stance. Watch it full screen. Hats low for Balz. This guy is on a windsurfing mission.

Well done for the transition from freestyle to waves!

This is not a switch back loop, he is quite clearly regular stance.. lame claim for fame

I guess switch depends on what you find “regular”. But for most windsurfers this is for sure SWITCH!!! Crazy that you must ride always like this so that it is normal!