Double Air Taka (Air Taka 720°) by Ricardo Campello. What a nice move. Ricardo is stoked to have finally landed one in front of a video camera. Ricardo: “Finally I got it on video after years of trying. I landed it twice without any videos or pictures but I will keep on working on it as I know the landing can be much better.”

Can you remember Marcilio Browne’s Double Air Taka from 6 years ago? It was actually perfectly rotated but not landed back on the wave. Link: Double Air Taka by Marcilio 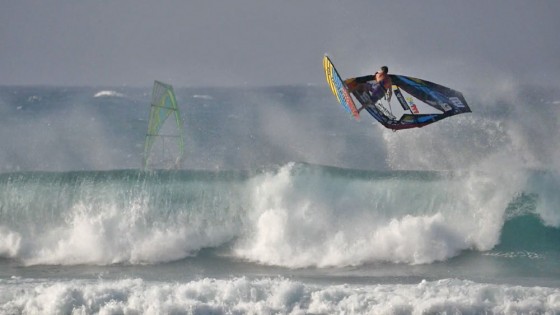 Nice! Cool to see Ricardo back in the game! He’s the guy pushing the limits with style!!!

Yes, Ricardo is definitely one of the most innovative windsurfers nowadays.

I am super stoked, so Ricardo is first landing a backloop and a doubletaka in the wave, amazing