With this one handed Taka Graham Ezzy won the “Champions for Charity“ supersession at the Aloha Classic 2014. Graham donated the $1000 price money to Mon Coeur, a charity started by Flo Jung and that he has worked with in the past year to help bring education to disadvantaged children in Africa.

Continentseven: Graham, what’s the history about the one handed Taka?
Graham Ezzy: I was the first person to do the one-handed Taka (and maybe I’m still the only person doing them?). I was inspired to try the first one almost 10 years ago after watching Josh Angulo do amazing 1-handed off-the-lips at Hookipa back when he rode for Ezzy. Then, 4 years ago, the eye behind umi, Brendan Pyatt, pushed me to develop the move further. In the last few years, I’ve done great ones on big waves with the hand gliding across the lip as it breaks, but no cameras captured the action. The one-handed Taka is hard and the crashes can hurt, so I don’t do too many of them in a day. 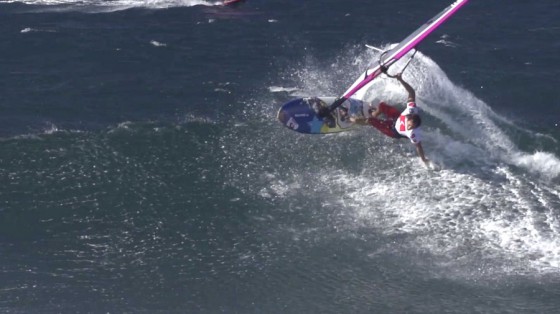 too much posing in the end. way too much. you’re not god

what a weird thing to say. too much posing. ha. its an expression session and that’s the winning move.

Graham Ezzy, one of the most underrated young talents ever, guilty only to be too much straightforawrd and overshadowed by another Maui young talent, that every “expert” in thw world decided would have been “the new Robby Naish” (and now the new Robby is not even competing in PWA…).
Airtakas, no handed pushloop, one footed pushloop, 100% one handed taka: what else?

Incredible imagery of the bomb cyclone, with a pressure equivalent to a Category 4 hurricane (943 mb) driving an extreme atmospheric river into Northern California. #CAwx 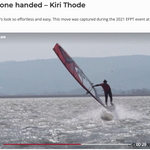