A look back on the 2019 PWA Gran Canaria Wind & Waves Festival.

Insane conditions with wind every day

The 2019 Gran Canaria Wind & Waves festival, which was two days longer this year, saw incredible wind conditions. There was not one day with less than 30 knots of wind. On the strongest days it even blew with 45 knots+. Only the juniors sailed in a bit lighter conditions on the first two days. From day three onwards the wind was howling and the waves got a bit bigger. Pozo Izquierdo did not disappoint and delivered enough wind to run a full double elimination for 21 women and 48 men, a kids event with 7 different fleets plus a super session for over 50 kids. For example a complete competition for men with a single and double elimination means 53 heats. One heat has a duration of 12 to 15 minutes (the final was 20 minutes) with a break of two minutes. 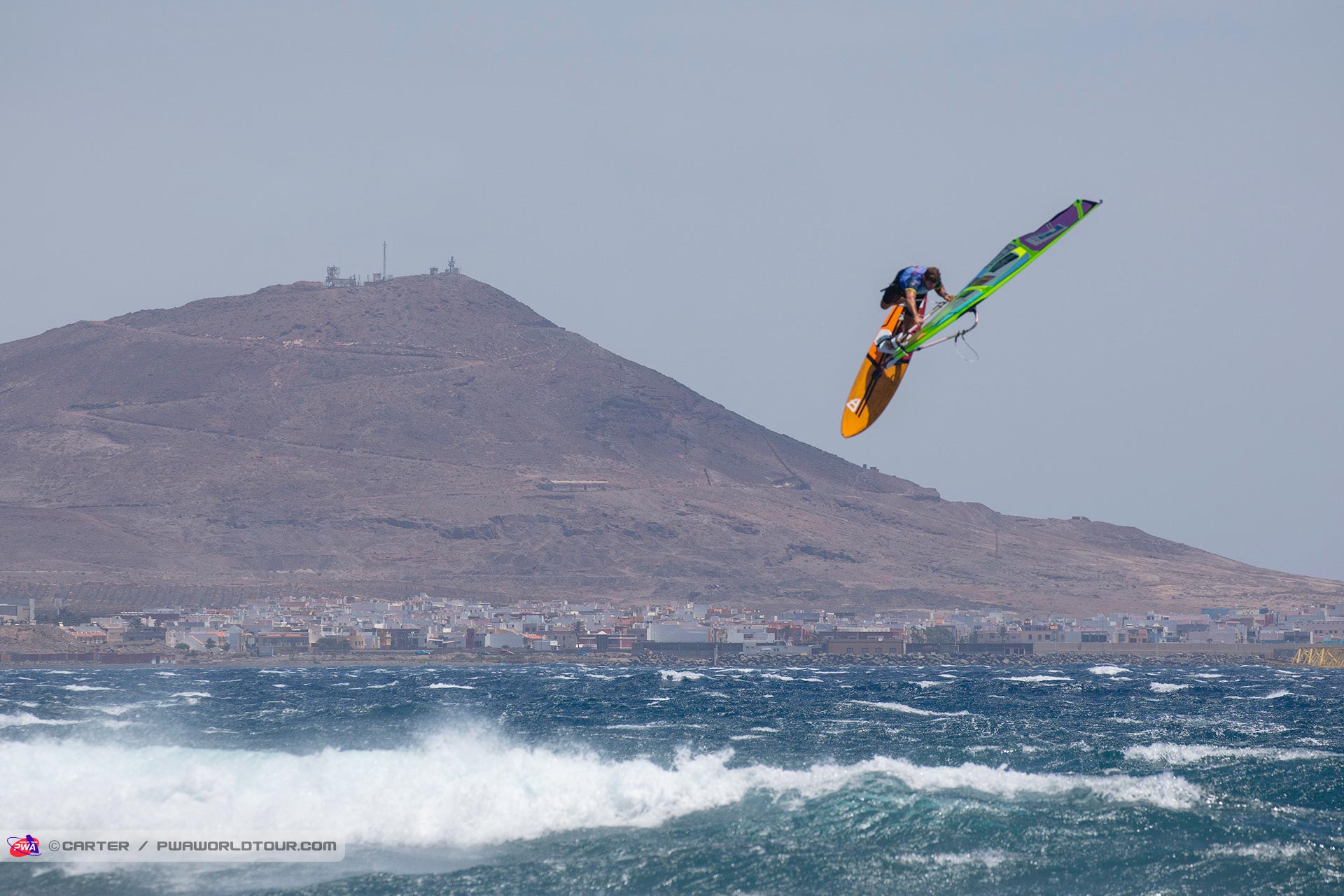 The 41 year-old Pozo local and Gran Canaria Wind& Waves Festival co-organizer Daida Ruano Moreno won the ladies competition for the 20th time. No wonder she is called “The Queen of Pozo”. This victory will be her first and last victory for this year as she will not attend in any other PWA wave windsurfing events. So, she will not battle for another PWA Wave World title this season. “It’s just a little break. I will come back next year,” Daida Ruano Moreno told us.

Ricardo Campello, one of the most radical windsurfers on our planet and three times freestyle world champion, won the event in Pozo for the first time in his long career. The 34 year-old windsurfer, who was born in Rio de Janeiro (Brazil) and moved to El Yaque, Isla Margarita (Venezuela), has a big dream. He wants to become Wave World Champion once in his lifetime. Perhaps his wish will become true this year.

Justyna Sniady from Poland finished 2nd and for the first time on the PWA podium. She was close to make it onto the podium in the last years but this year it happened. Justyna sailed very smart heats, took the right waves and was very consistent in her jumps. Justyna: “I still wake up in the morning and I go… arghhhh is it a dream?”

Almost 60 kids participated in the 2019 Gran Canaria Wind & Waves Festival. It’s great to see such a huge fleet of young windsurfers. Compared to 2018 the level increased a lot and almost all kids, even the youngest, land Forward loops and ripped the waves. Very impressive!

All participants, riders, co-workers and press received a branded bottle on day 1 to reduce the use of single-use plastic bottles which are normally used during events. Definitely a good start to a more sustainable event. Let’s see, if the food can be served unpacked, too in 2020. On the final day more than 50 people, locals, kids, co-workers from the organization team and riders gathered for a beach cleaning and worked hard to make the beach of Pozo Izquierdo cleander. Even top pros like the Moreno twins, Sarah-Quita Offringa or Victor Fernandez participated in the activities. Many youth competitors were part of the cleaning, too. Compared to last year, the beach was way cleaner. Good job!! 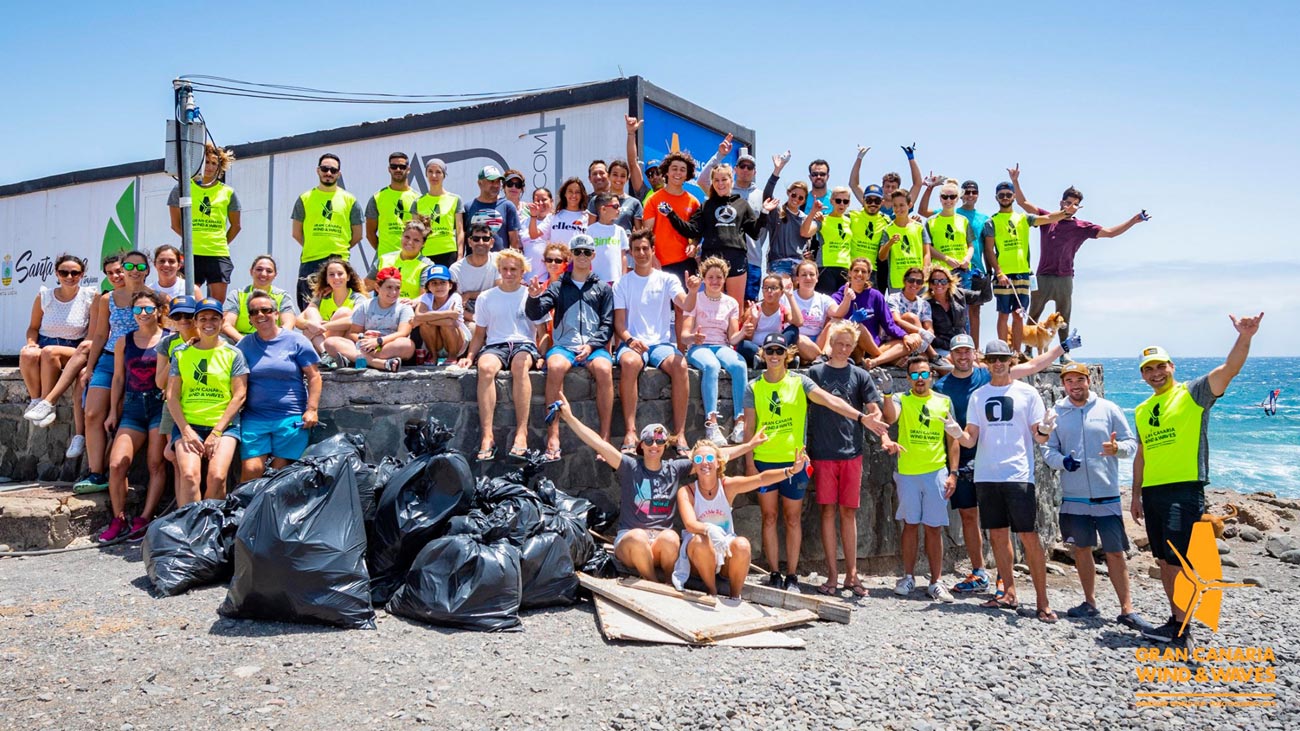 The beach cleaning was big success in Pozo izquierdo 2019

In 2018 the Moreno Twins and the government of Gran Canaria announced for the first time in history that the Gran Canaria Wind & Waves Festival will have equal price money as the first windsurfing event. Daida told us, that as long as they are organizing the event, equal prize money is guaranteed.

Daida Ruano Moreno collected 35.28 points in the semi final of the single elimination against Sarah-Quita Offringa. Daida made it twice above 30 points and was the only female rider who managed to make it into that region of points. Sarah-Quita Offringa was the rider, who was the closest of all riders. The Caribbean from Aruba received 29.22 points in a heat against Daida. Still it’s very hard to beat Daida, who exactly knows where to set the jumps and where to ride the waves. Justyna Sniady and Iballa Moreno broke the 25 point barrier. All other female riders were below 25 points with their heat scores.

Double Forward Loop by a women

Daida Ruano Moreno tried a double Forward loop in the final of the double elimination against Justyna Sniady. She had all her jumps done and went for a big one. It’s really nice to see that the ladies push the limits, too and try crazy jump moves.

Most of the big moves were shown by the top ranked riders.

The best wave rides: Victor Fernandez was the only rider, who made a 10 in the waves in Pozo. He managed to ride a really long wave with a lot of style in the single elimination against local Omar Sanchez.  A few other riders came close. Gollito Estredo surprised everyone and scored a 9.68 wave ride against Jaeger Stone in the single elimination. Philip Köster made it up to 9.45. All other riders didn’t reach the 9s. Brawzinho scored a 8.93, Ricardo Campello a 8.77, Marc Pare a 8.55 and Jaeger Stone a 8.43.

The best jumps: In the jumps we saw 4 jumps, which received 10 points. Ricardo Campello, Philip Köster and Marcilio got a 10 for a Push Loop into Forward Loop. Philip earned a 10 for a stalled double Forward in the super final against Ricardo.

The Back loops off the lip are back!! Both, Philip and Marcilio, landed this move in their heats. Further top moves were Table Top into double Forwards or clew first Takas. 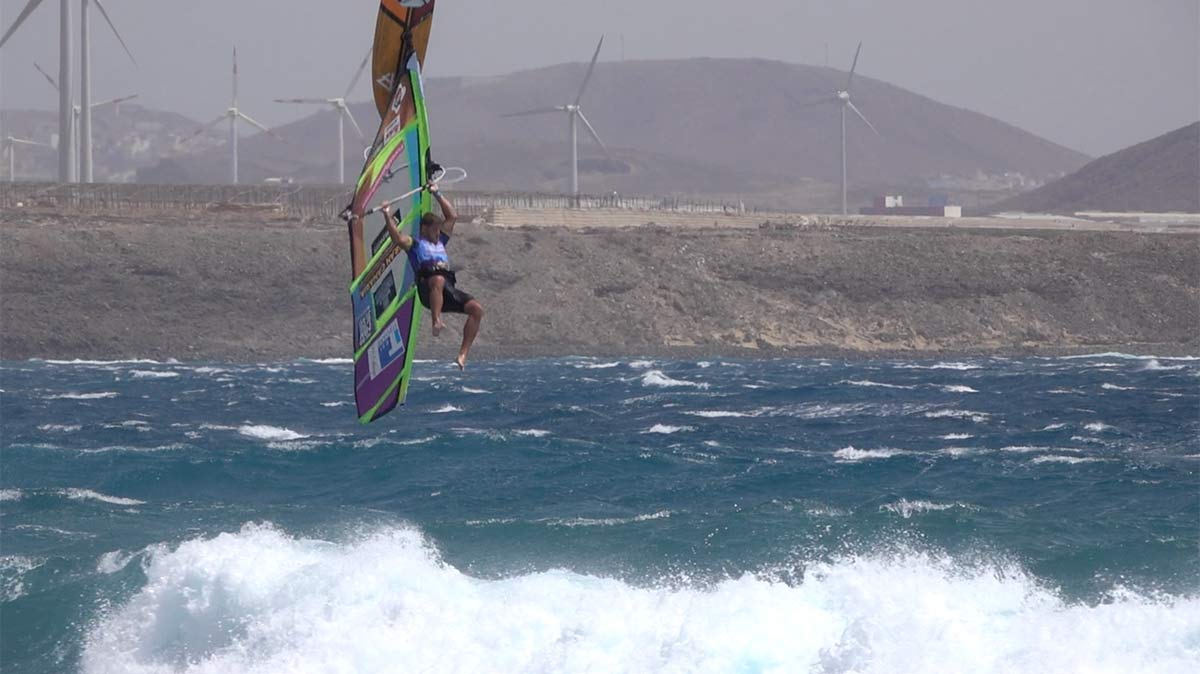 Thomas Traversa injured a toe hitting the strap during the single elimination in his heat against Alessio Stillrich. The Frenchman advanced to the next round but couldn’t compete against Philip Köster anymore and had to withdraw from the double elimination after an x-ray. We wish a speedy recovery. 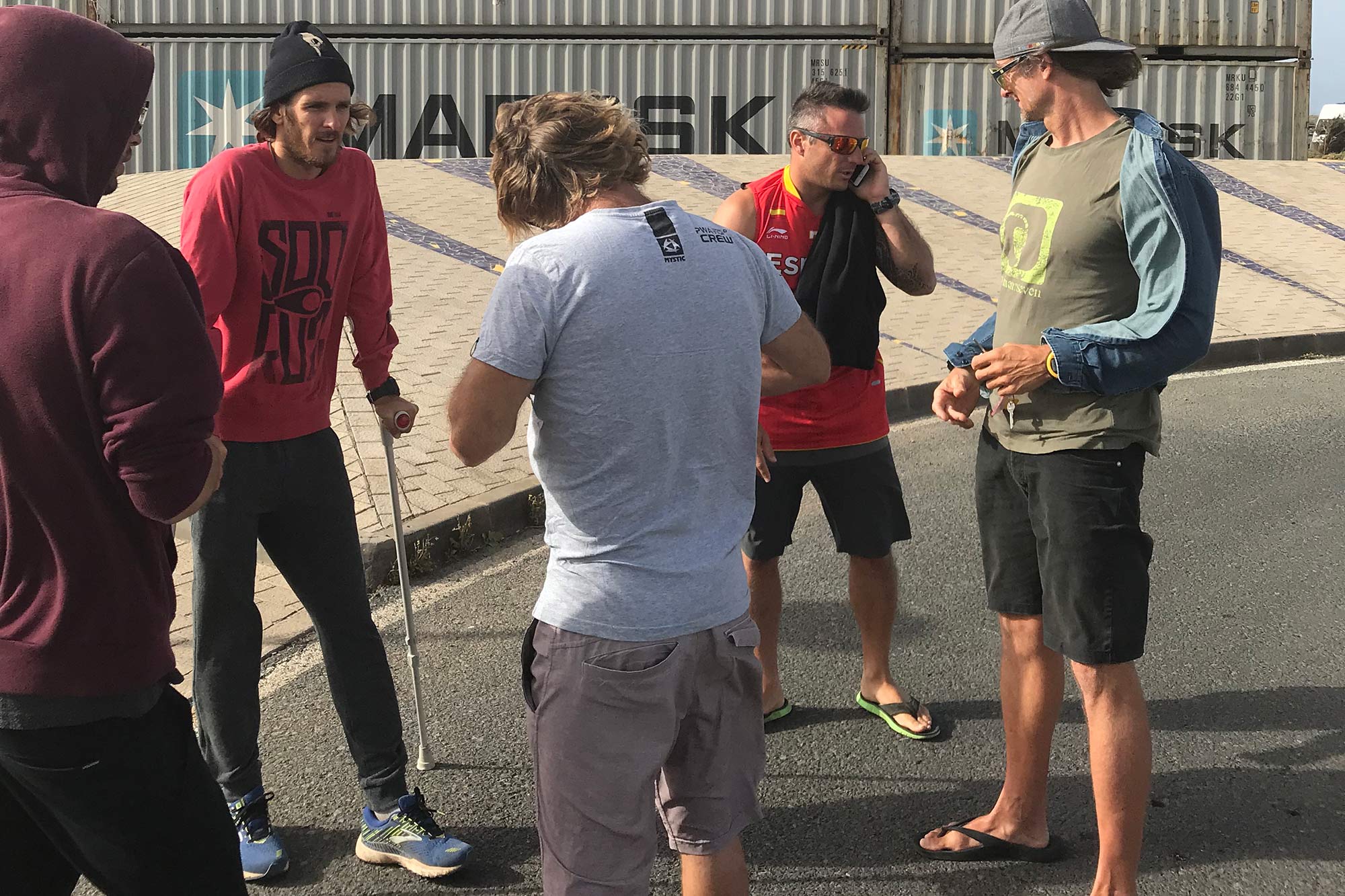 Victor Fernandez injured his neck during a hard landing of a stalled double Forward Loop in the semifinal against Ricardo Campello (single elimination) and couldn’t really show his full potential in the B-final against Philip Köster. Victor had problems to recover, even to sleep during the following nights. In the double elimination he managed to beat Jaeger Stone, but lost to Philip Köster, who showed the best heat of the event.
Some riders struggled with older injuries. Iballa Moreno had problems with her knee. It’s an old injury and she needs a surgery somewhen in the next years.
Josep Pons suffered a muscle injury. The Pozo local injured a muscle in his left lower leg. A muscle (part of the calf muscle), which is responsible for the inflection of the big toe (extensor hallucis longus muscle). The injury happened during a Backside 360° landing before the competition. Josep Pons tried everything, a lot of therapy and made it through the second round against Jules Denel, but couldn’t sail his next heat against Philip Köster. In the double elimination Pons tried it again, but lost against young hotshot from Tarifa Miguel Chapuis.

Most of the top riders used production boards. All the top ladies, Daida and Iballa Moreno, Justyna Sniady, Sarah-Quita Offringa were on production boards. Daida and Iballa Moreno used a 74 liters Severne Mako quad with Maui Ultra Fins and 3.0m and 3.3m Blade sails, Justyna was on a Simmer Flywave 72 Quad with standard production fins (blacktop 13″ and 9.5″) “This board is fast. In OZ I made sure to sail the same size as Jaeger to get ready for Pozo. In Pozo I used 3.0m in most of my heats and in some 3.4m. It was a very windy comp!” Justyna Sniady stated.

Philip Köster was on a 2020 production Starboard Ultra Kode 86 twinser, Marcilio Browne was on a production Goya Custom Pro Quad with 84 liters. Victor Fernandez used a 75 liter custom board with quad fin setup. The board has a similar shape like the production Grip 75. And he used sails in 3.4m and 3.7m.

Lina Erpenstein, one of the female wave talents from Germany, was not able to participate due to her medicine studies. But she will be back for the PWA event in El Cabezo, Tenerife.

Experienced German wave windsurfer and surfer Steffi Wahl ruptured her front syndesmosis ligament and another ligament in her foot while landing too steep in June. She is recovering from the injury and has to stay off the water.

Thanks for the excellent report! And I have to say that since the Moreno twins took over the event management, it’s got to a whole new dimension, especially regarding getting local kids to participate and promote a healthy lifestyle. Big congratulations to them and to you! Keep us posted

Thanks a lot for your feedback Dimitri.