A look back on a great freestyle show in Fuerteventura.

THE WINNERS 2018
2018 saw the same winners like in 2017. Sarah-Quita Offringa extends her incredible unbeaten run on the Women’s PWA Freestyle World Tour. She not only won the event for the 12th time but also claimed her 11th Freestyle world title. In the men’s 8-time Freestyle World Champion Jose ‘Gollito’ Estredo won the event for the 8th time. We saw some tight heats but Gollito seems to exactly know how to win heats and this event.

We filmed the heats and made a rough cut from the moves. In addition we caught up with the winners.

YOUTH WINNERS 2018
For the first time on the PWA Freestyle Tour the youth got the chance to show their skills and they put on a great show. There were 14 juniors from 11 to 18 years of age participating in the event.
Lennart Neubauer (14), Corto Dumond (17), Lucas Nebelung (16), Eugenio Marconi (18), Takuma Sugi (15), Val Erzen (11) are the names to watch out for. These names are the one’s to watch out. New Caledonian Corto Dumond (17) made it through two rounds in the double elimination of the pro men and Japanese Sugi had a very close heat in the first round of the double elimination against Phil Soltysiak. 14 year-old German Lennart Neubauer, who lives on the Greek island of Naxos, showed great skills in the men’s pro fleet, too. The future for the men’s freestyle looks bright. Lina Erzen (13 years-old) was the only young girl competing in the youth fleet but she also competed in women’s fleet where she finished 5th. She also got awarded with the 2018 PWA Youth girls world champion title. 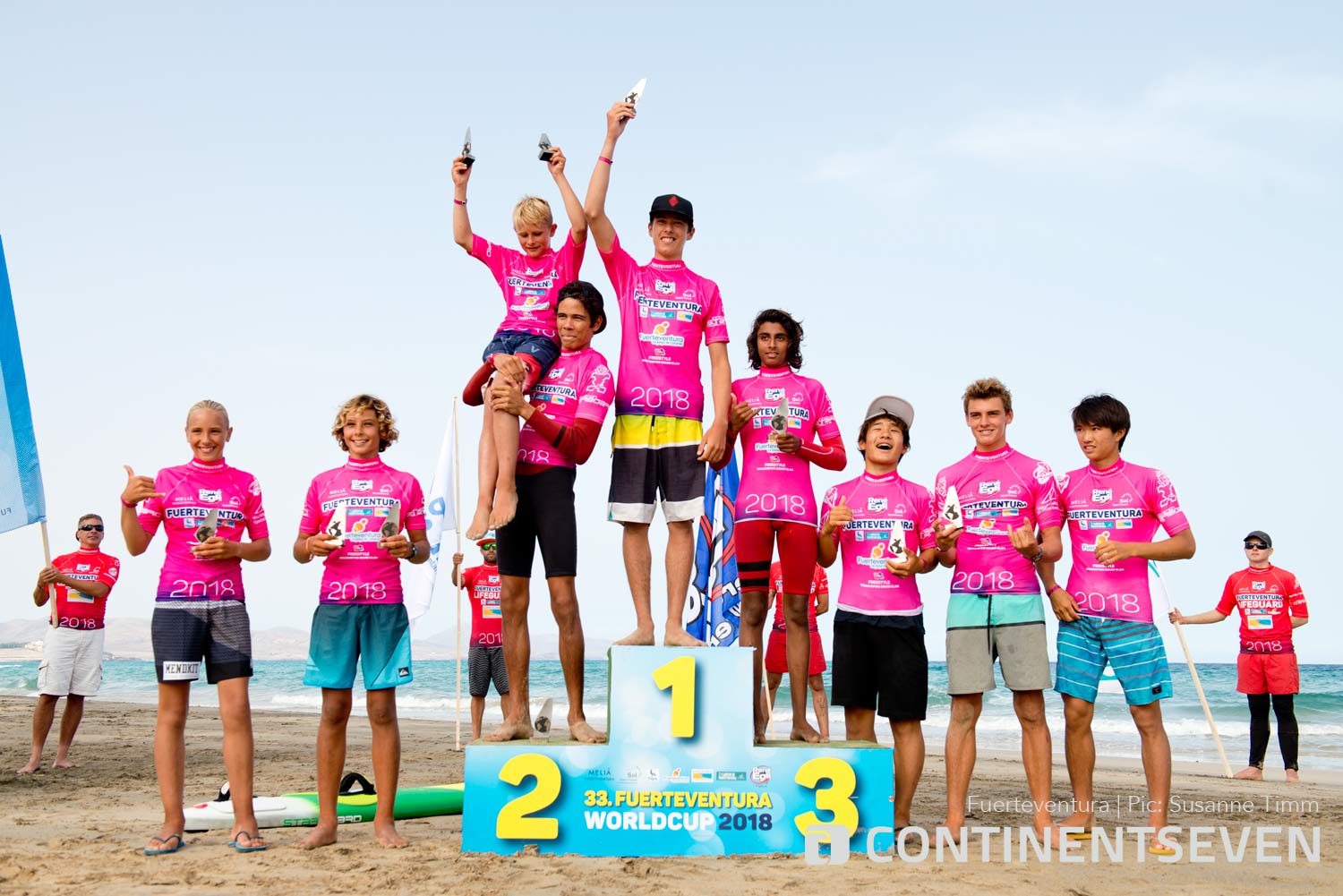 THE CONDITIONS
The conditions at the first two days of the event were great. The riders had to rig their smallest sails as the the famous wind at Sotavento picked up to 45 knots during the afternoon. And a new sandbank created some proper ramps within the heat area. On day 1 the single elimination of the men almost got completed. Day 2 saw the completion of the the men and women single and the start of the men’s double elimination. After the first two days the wind dropped and never came back to its normal strength and direction.

SURPRISES
We saw a lot of close heats, even in the first rounds. Gollito Estredo, Yentel Caers and Amado Vrieswijk made it into the top 4 and everyone expected them to be there. Adrien Bosson was the big surprise of the event as he finished in 2nd for the first time in his PWA freestyle career. He not only finished 2nd, the Frenchman was quite close to his first event victory as only 5.6 points separated him from a victory. After his 5th place in Sylt 2017 Antoine Albert from New Caledonia scores another 5th place. The former freestyle world champions from Belgium Dieter van der Eyken and Steven van Broeckhoven are still very competitive and both made it in 5th place.
In the women’s fleet we did not see any surprising results.

TOP HEAT SCORES MEN
It was 8 times Freestyle World Champion Gollito Estredo who scored highest with a 180.7 points heat in the semi final of the single elimination against Yentel Caers. The second highest heat score reached Amado Vrieswijk with 180.2 points in round 4. Adrien Bosson scored the third highest heat score with 177.7 points in the semi final against Amado Vrieswijk.

TOP HEAT SCORES WOMEN
Sarah-Quita Offringa dominates the ladies freestyle discipline. Her winners final heat against Maaike Huvermann was her best heat with 126.1 points. Maaike Huvermann’s best heat was her heat in round 2 in which she scored 100 points.

INJURIES
Unfortunately there is no event without injuries. On the day before the event Amado Vrieswijk overstretched his lateral upper body during an one handed Burner, which caused a lot of pain. Amado had to take painkillers to be able to compete.
Balz Müller hit the fin of Giovanni Passani at the beach while walking upwind, which caused a quite a deep cut on his shin. Marco Lufen fell on his board during a Pasko and bruised his thigh. Lucas Nebelung competed in the youth and he might have broken his hand during a Shaka. Giovanni Passani was still recovering from a deep cut caused by his fin at the inside of his knee. He had to use a lot of tape to protect his injured skin from the flying sand.

YOUNGEST & OLDEST
The youngest rider in the pro fleet was Lennart Neubauer, who is only 14 years-old. Lennart did not win a heat yet but performed well and showed great moves. He will be a hard opponent in the near future. Takuma Sugi is 16 years-old and only lost by 0.3 against Phil Soltysiak in the first heat of the double elimination. Corto Dummond, who is 17 years-old, won against Hakan Skorge and Yegor Popretinskiy in the double elimination. The oldest competitor was Birgit Rieger in the women’s freestyle fleet. She is 41 years-old and makes big Shakas and landed her first switch stance Kono in competition. Birgit finished 5th. In the men’s fleet Turkish windsurfer Berk Yalgin was the oldest with 37 years-old. He told us, he just loves windsurfing and competition. Tonky Frans was the second oldest competitor with 35 years and his brother Taty the third oldest with 34 years-old.

MISSING RIDERS
Kiri Thode did not compete, although he was on the list and seemed to be really motivated after his board sponsor change at end of last season. We heard, Kiri missed his flight. Yarden Meir did not compete, as he decided to stay in Israel for the summer, to earn money as windsurfing instructor and bartender. Rick Jendrusch did not compete, too. Rick is not 100% fit yet after his shoulder surgery. Olya Raskina did not compete in the ladies fleet this year, as she gave birth just a few months ago. Yoli de Brendt was in Fuerteventura but did not compete as she had to take care on her baby but Yoli wants to come back and compete again.

PWA FREESTYLE RUMOURS FOR 2019
The PWA freestylers had a meeting and they confirmed the plan to reduce the freestyle fleet to 32 riders for 2019. The EFPT will be the qualifier tour. Man on man heats are planned and the live scoring points might be changed. They want to change the scoring. The plan is to give a maximum of 10 points for the best moves but as in freestyle are more multiplicators it is not so easy to change the system. One move per tack will stay as a rule despite man on man heats. Tow in events are in discussion, if there is no wind. New heat formats are discussed, too. It looks like things are moving at the moment.

2019 FREESTYLE EQUIPMENT
Some of the companies released their 2019 freestyle equipment already. Most of the team riders from Fanatic, Duotone, Starboard, Severne, JP-Australia were using 2019 equipment already. We also spotted some new equipment from Tabou and GA. Steven van Broeckhoven used new Gun Sails prototypes. Mattia Fabrizi tested and used a new prototype from ChallengerSails. We did not see any 2019 products from NeilPryde, yet.

The 35th anniversary of the Fuerteventura World Cup had to be postponed to 2021 as a result of the Corona Pandemic due to safety concerns. Partners & sponsors are looking forward to host the prestigious event in 2021.
https://www.continentseven.com/pwa-world-tour-calendar-2020/ #pwaworldtour 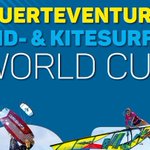 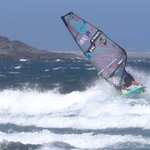