Klaas Voget, Victor Fernandez and Marcilio “Brownzinho” Browne, the worldclass Fanatic waveteam, met in South Africa to test several new wave shapes and sail together. All three got accompanied by Fanatic brandmanager Craig Gertebach, who originally grew up in South Africa and lives now in Bavaria, Germany. All four took a lot of risk in the massive breaks at Haagkat. We interviewed Klaas about this big day. Read more..

C7: You often sail in big waves. What were the difficult things there?

Klaas: Haakgat is quite a tricky place to get out when it’s big, as there is no real channel and the wind is super gusty on the inside. It’s always a bit of a lottery to make it or not when the waves are this size. On this day the wind was pretty strong, so if you time it with a good gust, you were out quite fast. 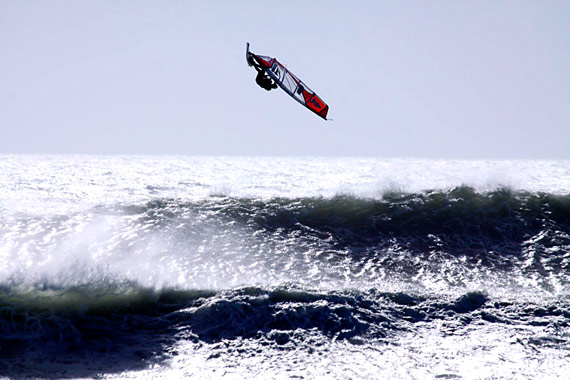 C7: In such difficult conditions, do you risk the same like in smaller waves?

Klaas: In these conditions the wavechoice is really important. Some waves would just closeout, others were open and not as choppy. When it’s big and windy like this, you always want to have a bigger wave in front of you, that cleans the water out a bit for your wave, otherwise you are just bouncing around on the waveface. When I have made a good choice, I normally risk a bit as well. I like the feeling of sailing in big waves. The timing is a bit different and if you time it well, you can have some really intense moments.

C7: Was it your best day in South Africa ever?

Klaas: It was for sure one of the biggest days, but probably not my best day. Last year we had one day in Scarborough and Outer Kom which was pretty good, but there are also a lot of really good Melkbos-Sessions on my list of the best days here.

C7: Did you or your friends break any equipment?

Klaas: I didn’t break anything, but Brawzinho went a bit too late in one of the big ones and broke his mast and destroyed his sail. 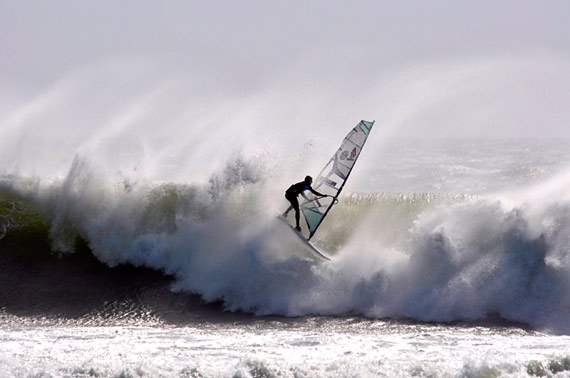 C7: Tell us, how is it, when you are sailing together with your chief Craig. Are you then even more motivated to show your skills?

Klaas: It’s always fun to sail with Craig. He is a really good sailor and he really goes for it. If I go for a big hit, he does the same on the next wave, especially when I can see it. I think we are both more motivated when we know that the other one is watching. 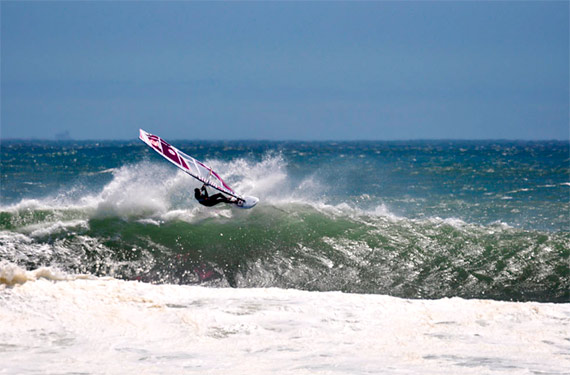 C7: Can you tell us a bit more about the Quad Boards. Why did Fanatic decide to work now as well on Quad boards? Do 4 fins make really a difference or is this actual Quad trend just a marketing thing?

Klaas: We would not use quads, if it would only be a marketing thing. When we started to test and play with multifin boards last summer we were blown away by the positive aspects the quad offers compared to twinser- and thruster-setups. It combines the control, grip and drive of a singlefin with the loose snappy feeling of a twinser. I think we will see more quad boards on the market in the future. 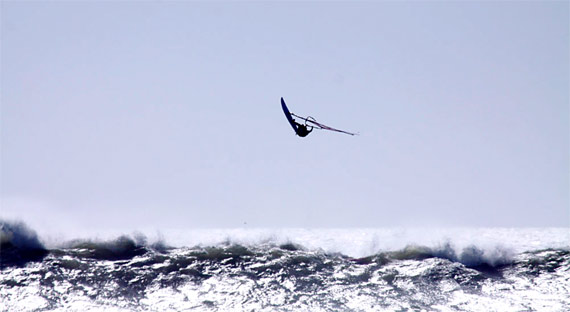 C7: Do you think that a Quad board is the more universal waveboard compared to a single fin board?

Klaas: It depends on the conditions. A singlefin is still a very fast, controlled and early planning setup, which has a really good overall performance. The Quad has it’s biggest advantages in the waverides. I think for advanced wavesailors the Quad offers a new dimension in terms of turning, as it grips much more than any other finsetup mentioned before. Also the Quad is really controlled when you’re overpowered, what makes it a good board for jumping as well. A single fin board is still faster and better for onshore conditions on the other hand. It always depends a lot on the shape of the board as well, our Quads have a much higher rocker than our singlefins and are as a result the more radical waveboard.

Statements of the other riders:

Victor Fernandez: “Well, I have to say that this day in Haagkat really impresed me. This is my 3rd time in Cape Town and I never saw such a big swell here like that. That day was my first day in Cape Town and just coming out from the plane we went home, then we had a little session in Milnerton beach, just in front of our place and after that we went to Haagkat and scored those big waves. It was actually very fun to sail with Craig, Klaas and Marcilio in my first day of the trip. This is one of those very big days I would never forget.”

Marcilio Browne: “Most of the times I heard about Cape Town before I arrived here it always sounded like a place with strong winds and small waves. But since one week it has been some big swells pretty much everyday. The day we went to Haakgat was a special day, the waves were pretty big, and increasing as the day went by, also the wind was really strong, full power 4,2m² weather. I was impressed how good the new Quad was working. I had the 81 liter that day, beacause the current was really strong in the inside, winds were gusty and the last thing you wanted was to get stuck in betwen waves. The board felt nice, was getting planning really early and had a lot of drive on those big choppy waves. The board kept a lot of control pretty much most of the time and also was moving around pretty well.”

Craig Gertenbach: “As a local who has sailed Haakgat for over 20 years, I was pretty suprised to see the swell picking up as quickly and as largely as it did on Monday. Last week I had a great session at Haakgat, without any swims or wipeouts, so on Monday I had to catch up…on my 2nd wave I got totally wiped out, held under and had a very long swim &walk. After a few similar situations I retired to the beach and enjoyed watching Klaas, Marcilio and Victor totally ripping in the huge sets. We have had 2 major swells and another 2 are on the way, so it´s definately the best January I have ever seen in Cape Town!”