Daida Ruano Moreno and Philip Köster won the 2015 PWA Gran Canaria Wind & Waves Festival. Both were extremely consistent, sailed amazing in all their heats and definitely deserve the victory. Philip even tried a Triple Forward Loop in the winners final of the single elimination. Daida Moreno landed a perfect high stalled Forward Loop and just 10 meters later a perfect one handed Backloop.

We hooked up with the top three men and women for a statement. 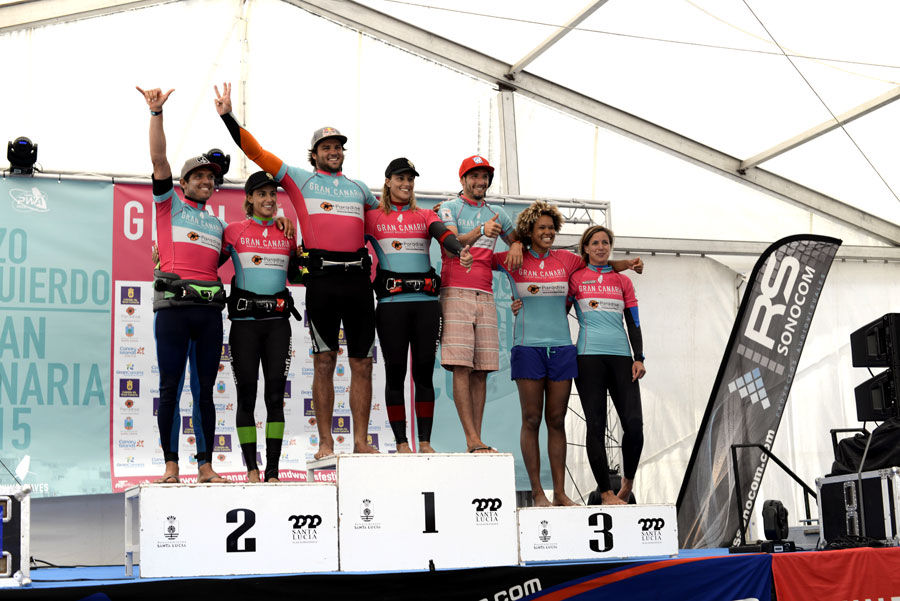 I am super stoked to take the win here at Gran Canaria. Both days of competitions were amazing. All my heats were good on the first day, the final against Alex (e.n. Mussolini) was the best final I’ve ever sailed. Also trying the triple Forward Loop was very special for me. I was feeling comfortable, but I think the conditions were not perfect and it was still not the right timing. I have to work on it a little bit and I am sure I will try it again. The final against Victor in the double elimination was also pretty good. I had a good start with a double Forward (e.n. it was fully planing) and Push Forward also and some nice wave rides. I am really stoked! It’s a nice start for me. Thanks to Iballa and Daida organizing the event, too. It’s always a pleasure to be here right at home. It can’t be better. I am really happy to win the event.

It was an amazing day for me. On the first day I was not able to compete really well, but I stayed focused and positive for sure. My father and a couple of friends pushed me to stay positive and just have fun on the water, not thinking about the competition. I tried to enjoy and do my best. And I was lucky to go through all my heats until the final. (e.n. Victor was winning 6 heats in a row and lost the 7th to Philip Köster). And doing my 9th final in a row is pretty amazing for me.

The competition was good for me. Nobody was expecting Thomas Traversa and me to be in the top 5, but there were waves and we were able to compete against this Pushloop Forwards. Before the event we were in Tenerife just wavesailing, almost no jumping and we thought, the best thing is to stay there, relax and stay away from all the Pozo hype and in the end it was a good decision.

It is hard to get a podium place. Last year I didn’t make podiums and the year before I always was on the podium, except at Pozo. Yesterday someone told me, I should be happy to be third, but my goal always is to win the event, because I want to be World Champion. And if you want to be World Champion you have to be competitive. For sure I am happy with my third place, but I am only happy if I am on the top. Sometimes you have to be realistic and you should know where your limits are. I know the conditions in Pozo are not perfect for me, but Tenerife fits my style perfectly and I hope it will take place.

It is my first year with RRD again and I also wanted to give them some happiness and show them, that it wasn’t a mistake to take me on the team. My first heat was against Flo Jung, a really good rider, but I wanted to show the judges already, that I have all the moves and the skills. I know, I don’t have the doubles in my repertoire, but I have a lot more to show. Then in the next heat I was against Klaas Voget, a rider I have been competing with for many years and then I got Victor Fernandez and I think I was lucky because Victor was not sailing really well and I took my chance as good as I could and I went through and then I met Dany in the semi. Everything went perfectly. The final in the single elimination with Philip was just like watching him doing the triple and stuff like this, but I am happy. It is the first time ever I finish at Pozo on the podium.

Finally, the conditions were good, 3,3 Pozo style and 2-3 meter waves. It was easy to jump and easy to ride. You did not have to milk the waves, as the waves were there and you just make a couple of turns and wave 360s. Last year I had a bit of problems because there were no waves. Actually in the double elimination against Victor there were not many waves and I couldn’t do my Wave 360s and my vertical turns. And as I don’t do a Double Forward, I need waves. In a wave event you need at least 1,5m waves, but it is Pozo and I don’t care, I am third. I know my mistakes and weak points, I don’t do Doubles and Push Forwards but I don’t complain and do respect the other riders. I hope Tenerife happens and I can show, that I can wave ride well.

Today was really crazy. I was sailing on my 3.3m, the waves and wind were there and I tried to hold on to my sail as much as I could and sailed having fun and the result came together. I am really stoked to be first at my home spot. I’ve been training really hard for this and I am happy to have my sister in the final. I am happy for our performance and for the organization, for my family and friends being together here during these two days. It’s great to have a full result after two days and now it’s time to have more action, the junior event and a lot of music in the tent and more great action on the water. I was very overpowered, but I am really happy with my stalled Forward, I am pretty stoked about this one in the final. I wanted to try a double Forward, a Tabletop Forward and a Pushloop Tabletop, but I tell you, I was really overpowered, but I am happy with my Stalled Forward and the one handed Backloop. After this moves I got my wave rides together. Iballa was unlucky with her jumps. So I’m just happy to put it all together having a great result here at Pozo!

I am really stoked I made it in the final with my sister Daida. She has been training loads. She is a really hard competitor. She jumps really well and won Gran Canaria all the times except once. But the whole heat in the final of the double elimination was painful for me. I just injured my neck when attempting a Table Top Forward. I landed hard on the left side of my body with my ear, twisted my neck and back and from there on I couldn’t focus anymore. Honestly my final of the single elimination went a little bit better. I didn’t sail during the last two months. So, considering I didn’t sail for such a long time because of a foot injury (e.n. Iballa injured her left ankle) and twisting my neck during the heat, too but I am happy that I am 2nd overall and Daida is first. And I am sure Daida will fix my pain later. She is a very good physiotherapist!

I am super happy to make it on the podium here in third place. Pozo is a legendary spot and I have been coming here since 2007 competing in freestyle. So from back then I always saw them jumping and doing all that crazy stuff. I could have never imagined that I will be part of that. Now I got third and it feels so amazing. I can say a dream comes true. It’ s really nice to sail with the Moreno Twins and it’s really good that their level is so high. So I have a goal to work towards to. I know that this is a level I would like to get to at some point, but this place is a good start for this year. I am glad that now they don’t keep on calling me the Freestyle Queen of windsurfing. You know, for me it’s not only freestyling, it’s just windsurfing in general. I just want to represent the sport.