Gollito Estredo wins the freestyle competition in Sylt in a thrilling final against Amado Vrieswijk. Amado won the single elimination but Gollito Estredo beat Amado in the double elimination and forced an all deciding Super Final, which he won as well. Gollito not only won the event, but also his 7th PWA Freestyle Champion title. 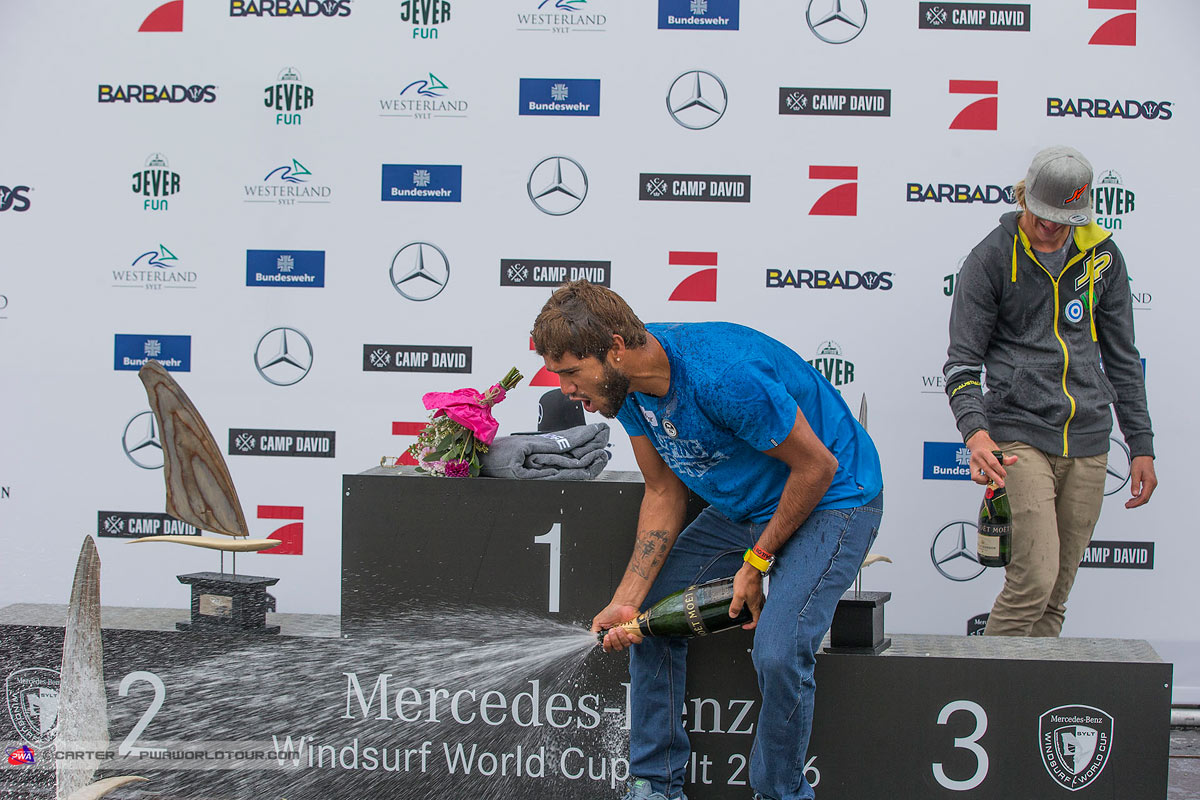 Contrary to all expectations, the wind picked up to suitable conditions on the final day of the PWA Windsurf World Cup in Sylt. Gollito Estredo seemed to be the only one to be prepared 100% for the final heats of the double elimination. No wonder, he was on a mission and wanted to win his 7th PWA World title.

First he stopped Adrien Bosson, who managed to win against Yentel Caers and Dieter van der Eyken. Adrien Bosson sailed very consistent and collected many points but not enough to beat an on form Gollito Estredo. The spectators were covered in winter jackets, wearing beanies, gloves and winter boots, but Gollito walked around barefoot and somehow managed to handle the ice cold north-east wind. Additionally he had Antoine Albeau on the beach, who supported him as caddy and personal motivator. Antoine brought him his neoprene coat and convinced Gollito, that he can beat Amado twice and grab the title last minute. Antoine definitely knows how to win as he collected numerous world titles (also a freestyle world title) over the years.

Gollito was on fire in the first heat and showed a mix of clean Air Moves, like an Air Chacho and modern freestyle combos like a Shoveit Spock or a Future. He was able to beat Amado on both tacks and had the highest single move score of 16.7 points for his Air Chacho. He put a lot of style into his moves, got great air and it seemed like had trained a lot in starboard tack conditions last winter. Gollito spent several weeks in Jericoacoara and on Maui, what paid off in this moment. 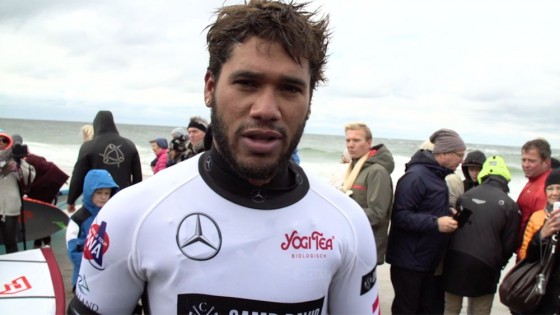 The Super Final had to decide about the event victory and the PWA freestyle title. The perfect story for a movie. The first Super Final got cancelled due to unsuitable wind conditions during the first attempt. Gollito already had landed a perfect Air Chacho. The pressure was rising. The PWA crew decided to extend the heat duration for the super final to 12 minutes, counting the best 4 moves out of 8 attempts on each tack. Amado put a great show on the water, landed a 20 points counting Air Kabikuchi on starboard tack and a clean Kabikuchi on port tack. He won in points over 6 times world champion Gollito on port tack in the end, but Gollito again stepped up his show. He collected 67.1 points on starboard tack compared to 52.1 points of Amado. This massive advantage in points made the difference. 18.7 points for a textbook Air Chacho and 18.3 points for a perfect Air Kabikuchi. He won the event with style and incredible skills. His fight against Amado was alive during the whole season. Gollito won the super final in Podersdorf against Amado, but lost against Amado in the double elimination in Fuerteventura. And in Sylt he won again. Both riders managed to make it on the podium in all three PWA events. We are sure the battle continues in 2017. 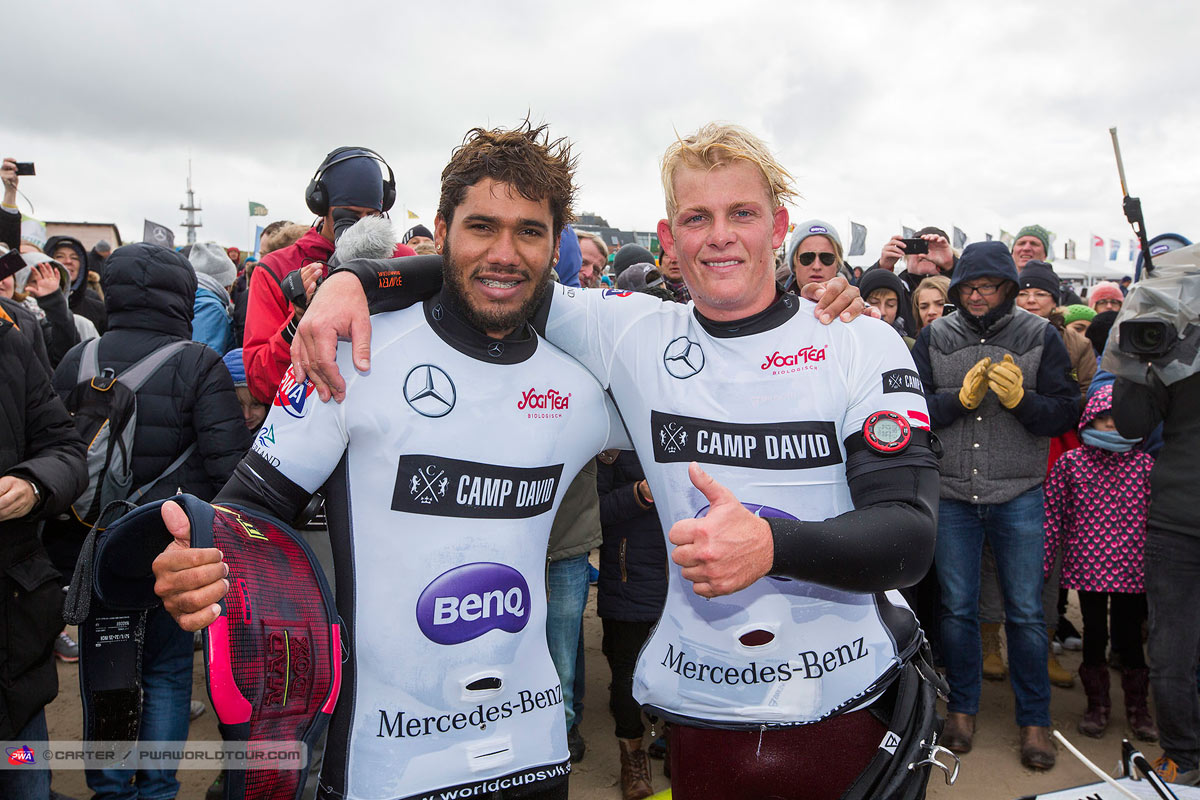 Gollito returned to the beach at 12.45. He celebrated his victory together with Antoine Albeau and the big crowd at the beach. When he realized his victory 100%, he jumped around and was happy as he would have won his first Freestyle world title. Big congrats to Gollito and Amado for the great show!!

Interesting facts for everyone, who likes statistics: Gollito won 17 freestyle heats on the PWA tour in 2016. Amado was the only opponent, who was able to beat Gollito during the season. Amado managed to win 4 heats against the World champion. One heat was a really close call. In the single on Fuerteventura Gollito lost by 0.4 points against Amado. Gollito only won 3 times against Amado during the 2016 season. Amado Vrieswijk won 22 heats and lost 5 times, twice to Yentel Caers and three times against Gollito.

So, both are on a similar level and it could have gone either way. Gollito’s advantage was his increcible performance on starboard tack, his mindset and his experience in winning titles.

concise, elaborate and clear description of the facts. good job, thanks!