Jacopo Testa (21) is one of the new hotshots in the windsurfing freestyle scene. He is from Italy and participated in PWA end EFPT events in 2012. With a massive Air Kabikuchi filmed in Brazil the young Italian was creating a hype in the social media and almost brought our server to a standstill. We had a little chat with the young Italian about this move and his winter training in Brazil. Read the short interview and watch his latest freestyle clip. Stunning action by a real freestyle addict!!! Watch out for ITA-2610! 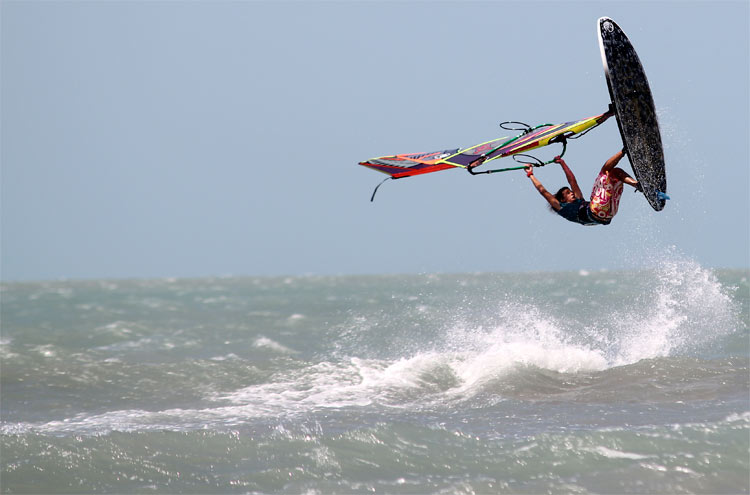 C7: Was it your first time landing such a big Air Kabikuchi?

Jacopo Testa: No, it wasn’t the first time. Here in Brazil the conditions for this move are perfect, strong wind and small waves are what you need for a big Air Kabikuchi.

C7: Are you able to land the move again or perhaps will you land it during a competition in 2013?

Jacopo Testa: Yes for sure!! I can do this move almost every day, a couple of days ago I made two in a row. I think Fuerteventura is perfect for this move on the left side, but I do it on the right side, too. I hope to land it during a competition, we’ll see, you never know.

C7: For how long did you practice this move?

Jacopo Testa: Already during the 2012 PWA event in Sotavento, Fuerteventura I started to make the first Air Kabikuchis. But the first real Air Kabikuchi I landed in France at Six Fours during the European Funboard Expression (EFE). I was in the water during the warm up with the 4.7m. I was really overpowered and when I was ducking the sail I used a chop to jump higher and I landed it perfectly for the first time. During the rotation I didn’t understand anything, but at the end I was super happy.

C7: What inspired you to go for this move?

Jacopo Testa: For sure the videos from Kiri Thode. I saw one video of a Kabikuchi he made during a PWA contest in Vietnam in 2011 and I thought that I wanted to fly like him.

C7: You are landing many other moves really excellent. Do you have any other new moves in the pocket?

Jacopo Testa: Yes, here in Brazil I’m training full power!!! At the moment I’m training more on the combos like Double Culo and also some wave jumps, because they are necessary for the events like Fuerte and Sylt… for now my best move is the Air Kabikuchi. 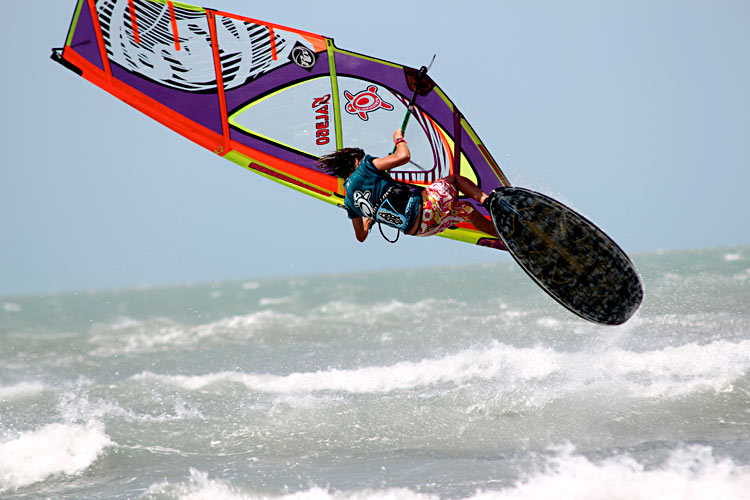 C7: Your are training at Sao Miguel do Gostoso right now. Is this spot the perfect freestyle winterspot in Brazil?

Jacopo Testa: I have seen many spots near Jericoacoara, for example Camocim, all the lagoons and other spots not yet known, but in my opinion Sao Miguel do Gostoso offers a greater variety of spots. There is wind almost every day between 20 and 28 knots, for me the perfect sail is 4.7m and there are a lot less people in the water and this is definitely better.

This year the level in the water was much higher. Steven van Broeckhoven, Dieter van der Eyken, Andraz Zan and Rick Jendrusch were here for training and not to forget about Kauli, who is sailing every single day. I think this was the fifth year and not the last year, that I spend the winter in Sao Miguel do Gostoso.

Horrible music. And I don’t know why it seems that Jacopo is in slow motion during his moves, do you have the same feeling?