This is our look back on the first PWA Freestyle event of the season. The conditions, especially on the first day were epic with winds gusting up to 40 knots. The extreme wind produced steep ramps for a first freestyle show down, which definitely was the most radical action we have ever witnessed at Lake Neusiedl. The double elimination was completed on day two in 15-20 knots of wind, but the victor remained the same with Gollito Estredo, although Amado Vrieswijk managed to win the first winners final against Gollito. We sat down and thought about a few facts of the event.

2015 was Gollito Estredo’s worst season since he started competing on the PWA World Tour, but Gollito showed why he is multiple freestyle champion and won the first freestyle event of the seaon. By the way it was Gollito’s fourth victory in Podersdorf (he won 2008, 2012, 2013, 2016). To win the event, Gollito lost one heat and won 6 heats. The Venezuelan defeated Marteen van Ochten, Sam Esteve, Yentel Caers, Taty Frans and Adrien Bosson in the single elimination. In the double elimination Amado Vrieswijk managed to win the first winners final against Gollito and enforced a super final. Gollito won the super final by 3 points. 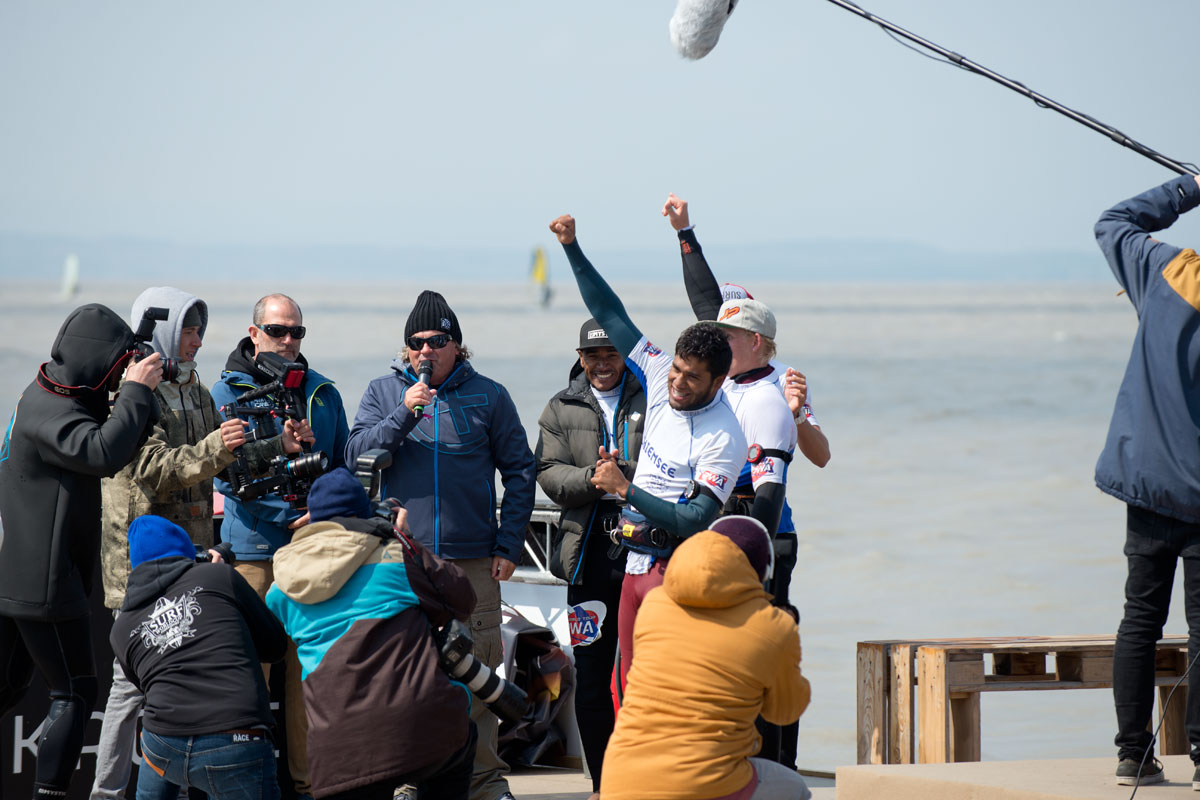 After his single elimination drop out against Yentel Caers, Amado Vrieswijk sailed incredible 10 heats and finished the event in second. The Bonairean was on great form and won 9 heats in a row and even won against Gollito Estredo in the first final. With this win Amado enforced a super final, which actually was heat 10 for Amado in the double elimination. It was again a tight battle, but in the end Gollito won. Amado had a total competition time of 120 minutes and went for almost 150 moves. After the super final, Amado was just lying on the grass in the riders area not able to move anymore.
Adrien Bosson finished for the first time on the PWA podium finishing in third. It’s a fantastic start to the season for the Frenchman and he told us he couldn’t expect a better start of the season.

Podersdorf got hit by a strong storm front. The extreme wind produced steep ramps for a perfect freestyle show on the first day of the event, which definitely was the most radical action we have ever witnessed at Lake Neusiedl. The riders were on their smallest sails like 3.8 to 4.0 m. Many of the riders, like Gollito Estredo, Kiri Thode or Taty Frans told us they were not used to such strong wind, as they mostly trained with their 4,4 or bigger. 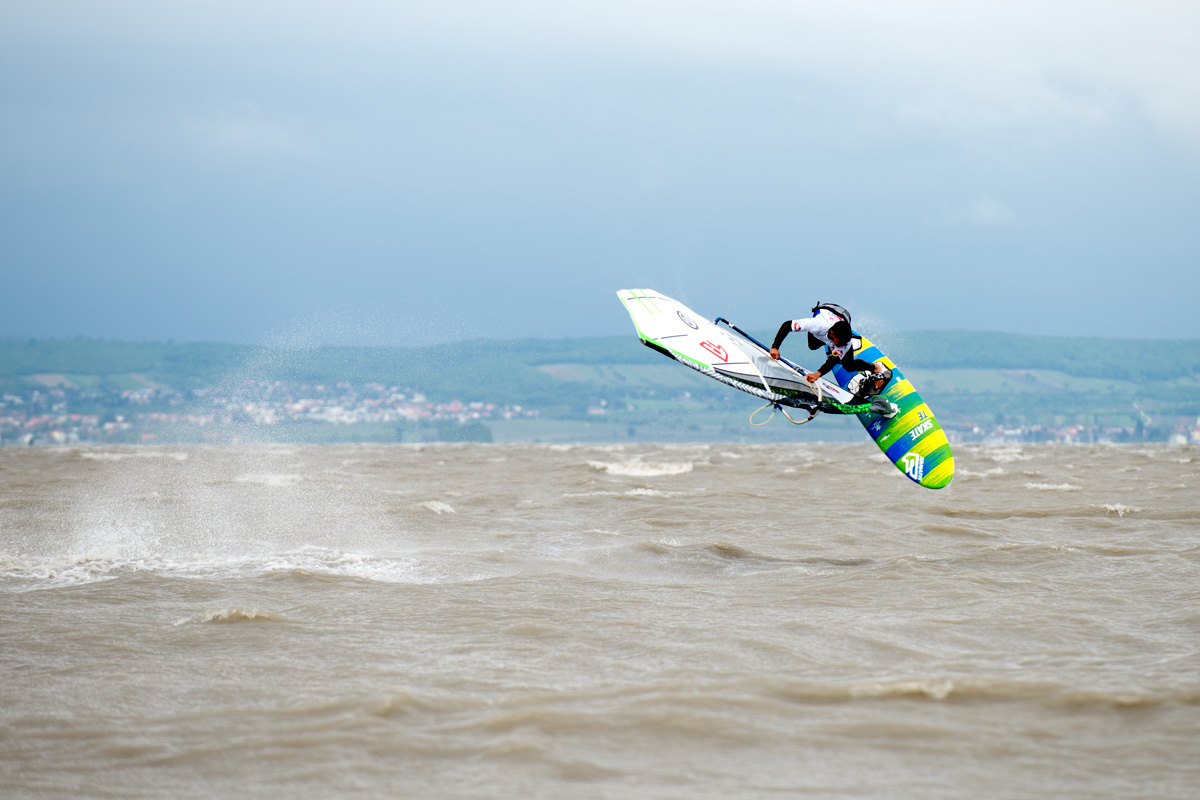 The level went up. Definitely. Guess we never saw such a high level in first round heats. Many riders tried Shifties, landed difficult double moves or landed Air Skopus or Air Kabikuchis in the high wind conditions. In the lighter wind conditions the riders showed a good early planing performance and it seems the riders are more prepared to compete in lighter wind conditions compared to the last years. On the second day Steven van Broeckhoven for instance was using a 105 liter board and a 5.7m sail, the biggest available freestyle gear from his equipment sponsors.

When we saw the wind forecast for the event, we knew the action will be great. And it was. The most outstanding move was probably Gollito Estredo’s perfect Shifty. We knew someone will land a perfect Shifty at Lake Neusiedl, either Balz Müller, Yentel Caers, Steven van Broeckhoven, etc. or Gollito Estredo. And, it was the multiple freestyle champion who landed a perfect Shifty in his second heat against Sam Esteve in front of our camera.  Happy we captured it. Another amazing move was a nearly perfect Double Air Culo by Amado Vriewswijk. 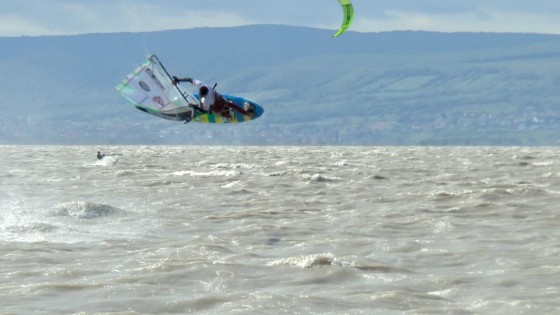 The PWA crew used for the first time in history of PWA freestyle competition a live judging system. The scoring was done live, but it was not shown to the public yet. They still had a scribe as a backup in case the internet connection was down or anything else didn’t work as it should. One of the big advantages is, the judges do not need to know how hard a move is, because this information is now already preprogrammed in the system. A soon as a judge sees a move, he gives a score between 0-10 based on style and execution. That score gets then multiplied by a difficulty level, which is, like already mentioned, preprogrammed.
The PWA not only changed the judging system, they as well decided to run heats in a smaller heat area and decided to count only one move per tack. Several riders struggled with that smaller area and landed their moves outside the heat area or had a hard time with the one move per tack rule. Several riders mentioned that their flow was broken. Some riders complained about the judging boat, which was anchored quite close to the heat area and covered the wind or made it more gusty.

The freestyle pros are using longer fins. That’s what 2015 freestyle world champion Dieter van der Eyken and Amado Vrieswijk, the number 2 in Podersdorf, told us. 18 to 20 cm are the most used sizes at the moment. Amado Vrieswijk: “I used a 20 cm long fin on my 92 and my 101 liter boards. I also have a 19 cm long fin in use actually.”  Even Kiri Thode, who used 16,5 cm long freestyle stub in the past, has a 18 cm long one in his fin box. “For fins everybody is going longer. As everything goes more in the air, everybody is opting for a longer fin again to get more speed and more pop”, Dieter van der Eyken adds.

Youp Schmit crashed a Shove It Spock and hit the rail of his board with his calf. Youp Schmit: “I went for one of my favorite moves the Shove It Spock and I slipped out my back footstrap and slammed my calf muscle into the rail of the board. At that moment I didn’t think there was too much going on but as the adrenaline and tension started to go down, and as I was coming back onto the beach from my heat I was just not able to walk anymore. My calf muscle of my leg was stiffing up and giving me so much pain I could have literally cried! During a comptition you want to only keep going, but my calf muscle wouldn’t let me do it anymore, and I was forced to give away my next heat.” Somehow Youp managed to stand the pain on the second day in the double elimination and landed big moves during the freezing morning hours. The rider from Bonaire defeated Max Rowe, who twisted his ankle in this heat. And in the following heat he advanced in a tight battle against Hugo de Sousa. Youp got stopped by Balz Müller. Max Rowe posted the all clear message on his FB account: “I also got some good news about my ankle; it’s not as serious as they first thought and it looks like some more physio rather than surgery should be able to solve the problem.”
Nic Hibdige had the hardest crash in the tow in event during his qualifying round. He crashed into his sail with the right shoulder, destroyed the sail and injured his shoulder. The impact was massive!
“My shoulder and neck is pretty good yeah! Few more weeks off the water because the nerves have stretched so it is aggravating all the time which sucks but no real damage just took a hard hit!” 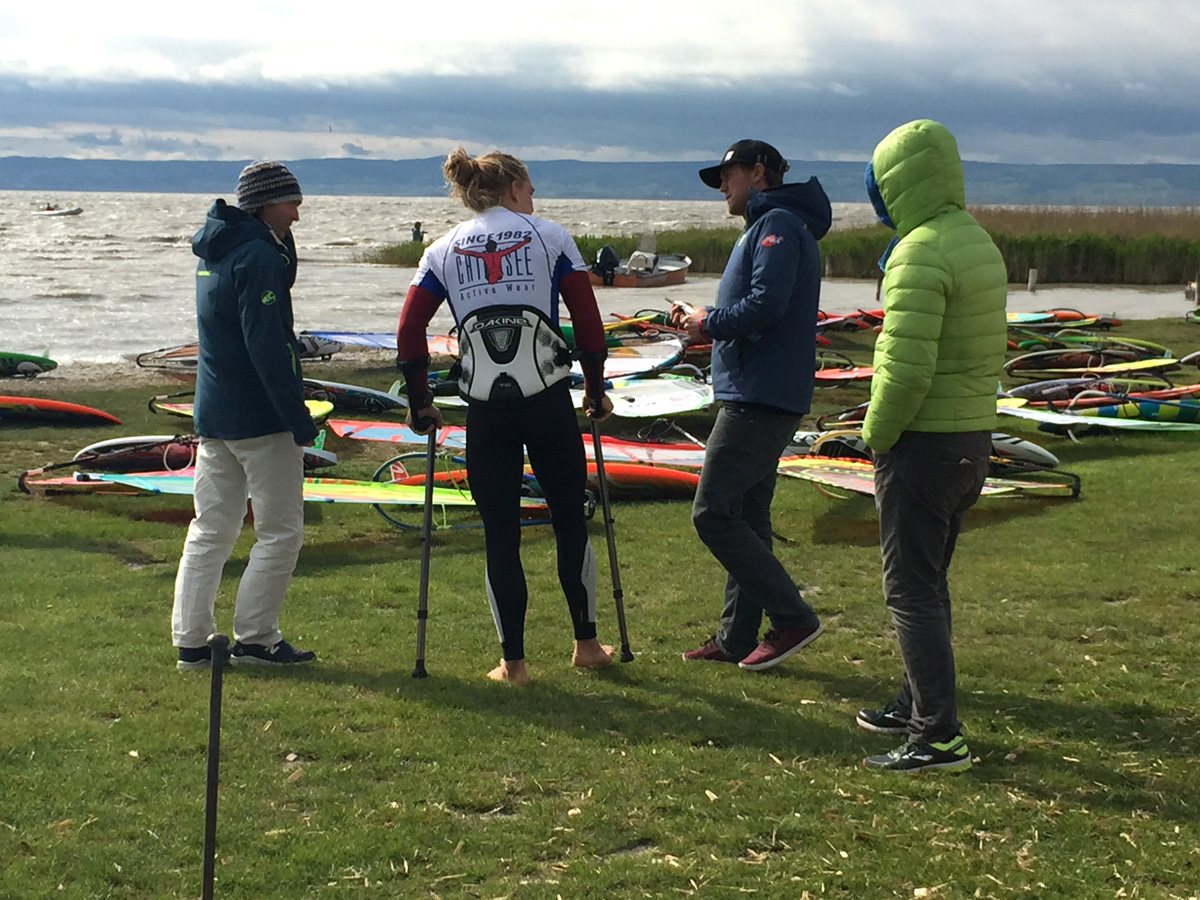 Tonky Frans, the eldest of the freestyle fleet, won the Chiemsee EFPT Tow-In show. None of the big names shared the podium with Tonky, who won the event with a stylish Skopu. No Gollito, no Steven, no Kiri. Davy Scheffers made it in second place and Antoine Albert from New Caledonia got 3rd. 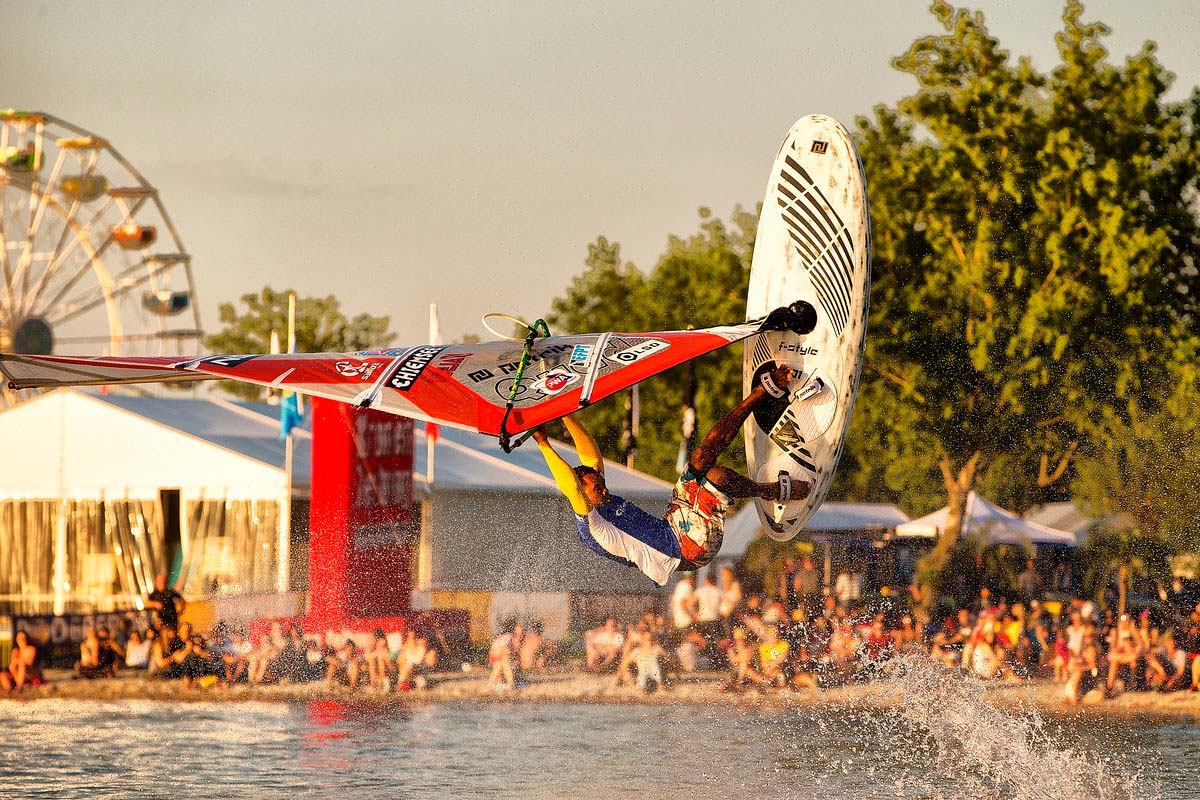 10. Was this the last PWA freestyle event in Podersdorf?

The contract for the event between Podersdorf and KGP Events GmbH is terminated. At the moment it is one word against another in the argument between the chief of Podersdorf tourism Hannes Anton and event organizer Gerhard Polak. The fronts are hardened and the verbal exchanges reached the newspapers.
One event less is definitely a big loss for the freestyle pros, as there are anyway not many events on the calendar (in 2016 only three events). The organizer already tries to find a new location to run the event, but let’s see if a PWA freestyle event will be part of the game.

Read more about the event

Thanks Loick!! Yeah, was great to follow the action live at the spot. And the single elimination saw one of the windiest days of the 2016 season.