Earlier this week Kevin Pritchard scored a double windsurfing session at Waddell Creek Beach and Davenport. Windsurfer and inventor of many freestyle tricks from California Ian Boyd was there to capture some of the action.  Kevin Pritchard: “Super stoked on a killer day in Santa Cruz. Time spent with friends, good food, good fun, and good times. Thanks to all involved and thanks for the killer little clip of my day on the Cali Coast! Big thanks for Ian Boyd putting this all together so quick.”

And imagine, KP announced last year in one of our interviews to go for Doubles this year. And he made it on June 14, 2016.

Continentseven: What will come next? Double loops or one handed Goiters? (in the interview “Kevin Pritchard about the US West Coast”, July 9, 2015)
Kevin Pritchard: Next year I am going to be doing doubles. I want to be 40 and throwing doubles consistently. I am hoping for the next video you see of me to have a bunch of doubles being thrown. I really wanted one in Pistol but by the time I got to it, I was too overpowered and too tired. Next time. I want to go for it, and I know I can, I would love to get them down and then come and break some young kids dreams in France or Denmark, but we will see. I know that Brawz and Philip and those guys are really strong at what they do. At this time in my career you just have to be honest with yourself. Read the full interview

Windsurfing in California with Kevin Pritchard

For all fans of windsurfing history: please watch “Quake on the Gold Coast: California Windsurfing Guide” from 1993, produced by Frontier Productions

By the way: what is Ian Boyd doing…. he was one of my idols…. way ahead of his time with his freestyle video “tricks of the trade” (forgott the name, but it was very similar. 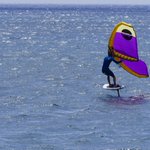