The Irish wave sailor Timo Mullen is one of the windsurfing worlds most passionate explorers and he is constantly seeking out new spots around the globe. This time Timo travelled to the Isle of Lewis in the Outer Hebrides, which are an island chain off the west coast of Scotland.

We caught up with Timo who is currently in Cape Town with his family to ask him a bit more about Lewis. But before you read the interview watch these pictures showing the beauty of Scotland. And don´t forget to watch the video of Timo hitting the waves in Lewis! 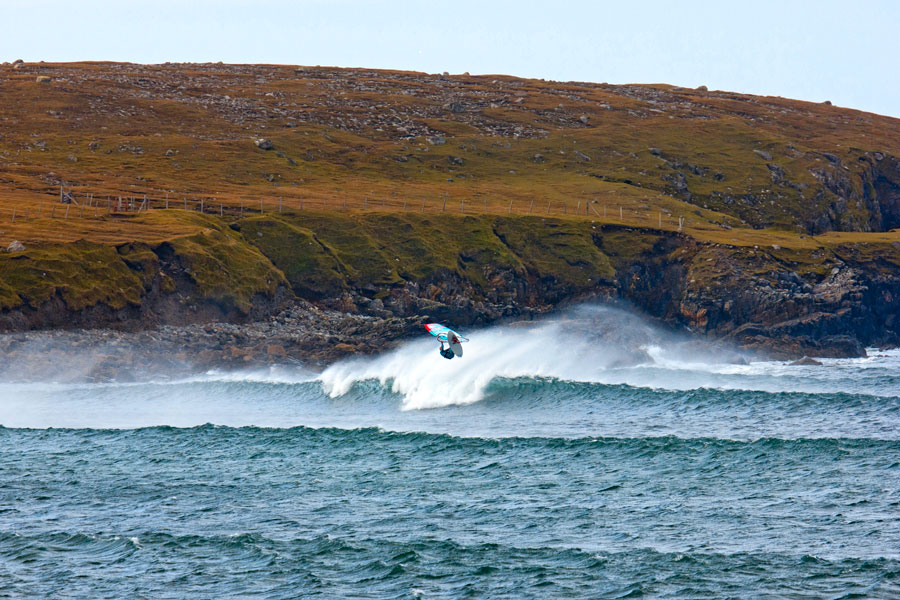 C7: Timo the conditions look pretty awesome, when did you first experience the delights of Lewis?
Timo: It was actually Scott McKercher who first gave me the heads up on Lewis, he went there with a few pro surfers about 15 years ago, Scotty actually sailed the place starboard tack, which is rare, but nonetheless the conditions by all accounts were epic so I made a mental note to head there one day. In 2006 myself, JC and my brother Finn bit the bullet and went for it, we really did score it good that time, in fact it got so windy on that particular trip we got stuck on the island for 3 extra days!  Since then I have been going back at least twice a year, I’d say on the right day it’s easily the best place I’ve ever been for wavesailing.

C7: Wow that’s a big statement, as you have been to nearly every world class wavesailing spot around the world! Why Lewis?
Timo: I think it’s the fact it is so raw and untouched, the best time of year to score it is between October and March, that is pretty cold up there, so that keeps the crowds away, actually the 16 hour drive and ferry probably keeps the crowds away!!  The quality of the conditions though really are unique, at Barvas there are 3 world class breaks all within a 1km stretch of coastline.

C7: What was your best session there?
Timo: I’d say last year when I went with my father, it was an insane forecast but Scotland was covered in snow!! It was early March, we scored Barvas and Bru as good as I have seen them, way over mast high but really clean and so predictable.  The trip was made more special on the way home as we scored a days snowboarding in Aviemore, the Scottish Alps!!!

C7: The weather does not look too bad in the video (editors note: the video will go online later today), sunny,  blue skies, you were even in a T shirt!!
Timo: We were lucky, this trip in the video was in early September, it is pretty rare to get enough wind and swell big enough that time of year, the days are so long as it is so far North, I think we surfed until 10.30pm one night, in contrast I was in Lewis 2 weeks ago with JC and Jamie Hancock and it was dark by 3.30pm, it really is a place of one extreme to another.  The trip in the video we got pretty unlucky with the wind, on the first day it was almost too windy, I was on a 3.7m which is rare for me, which kind of made waveriding difficult, then Day2 and 3 were really light, maybe 6-10 knots, luckily Starboard make a pretty sweet 92 Quad that was perfect for the light conditions, like I say in the video Bragar prefers lighter wind but a few more knots would have been nice!!

C7: Well it did not look to bad from where we are sitting, your brother Tam seemed to work his magic with the camera lens!
Timo: Yeah I must say a big thank you to Tam, he dropped everything for the chance of coming, he really wanted to visit Lewis for a long time, he scored some good sailing as well though, 100 metres from Barvas is a Lough (Lake) that is ideal for freeride blasting if you don’t fancy mast high waves breaking onto rocks.  We were really lucky with the weather it was pretty much sunny for the whole time we were there.  On one of the nights the sky was so clear we witnessed about 30 shooting stars!!

C7: OK, we’ll let you get back to your family holiday in Cape Town, looks like you are scoring it good there as well, luck of the Irish!!!
Timo: Ha ha, yeah my wife was not so keen on spending XMAS in Lewis so we had to go somewhere where she would at least get a sun tan, trust me Lewis was on my XMAS list, just check out on Windguru for this weekend to understand why!!! I hope everyone has a very Happy and Peaceful XMAS and New year and thanks for everything Continentseven!! And folks, stay tuned for the video, coming online later today.