Gollito Estredo and Sarah-Quita Offringa are the winners of the single elimination at the PWA Fuerteventura World Cup. 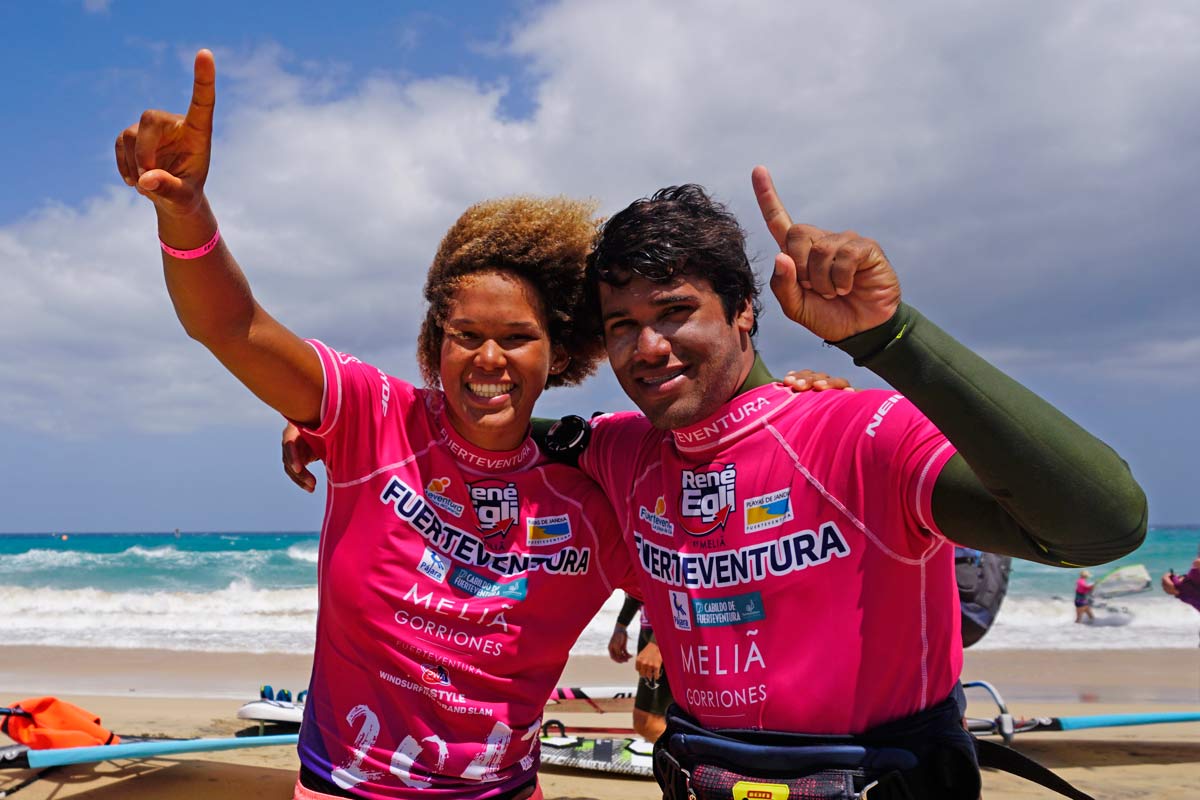 In the semi finals we saw a close battle between Amado Vrieswijk and Jacopo Testa. Jacopo was fighting, landed his signature move Spock Kono and even went for a Double Forward Loop (the first in the event this year), which he nearly landed. In the end Amado collected more points and made it into the winners final. The other semi final was Gollito Estredo against Yentel Caers. Gollito was on fire and set a high score with 191.4 points against Yentel Caers.

The winners final was pretty close. It could have gone either way. Gollito won the final with 13.5 points difference but Amado was missing one move on his score sheet, as his Bongka was outside the heat area and did not score any points. This one move could have made the difference for Amado. Gollito had a solid heat, not as perfect as the one in the semi finals. Gollito showed some newer move combos, like a Shove it Forward or Chebongka. He did a huge Back loop and risked an Air Chacho. Some of his landings were slightly wet but he scored high points for his jumping, probably because the jumps were pretty high.

Jacopo Testa won the battle against Yentel Caers for the remaining spot on the podium in the single elimination. Yentel landed one of his moves outside the heat area and lost important points. Jacopo won by 3.7 points and Yentel was extremely disappointed about this decision.

In the ladies fleet Oda Johanne won over Maaike Huvermann and Sarah-Quita Offringa defeated Arrianne Aukes. Sarah-Quita was on great form and dominated the final against Oda with a great performance landing a Shaka, a Forward loop, Kono, Spock, Ponch, Culo, Burner and many more moves. Oda wasn’t able to repeat her great performance from the semi final and crashed many of her moves during the final.

The conditions in the double elimination were excellent. A lower tide formed excellent waves at the sandbars and the riders of the first round showed some great air moves. The outstanding riders of the Double elimination were Davy Scheffers, Youp Schmit and Riccardo Marca, who all collected above 150 points in their heats. Davy for example landed a Shifty on the way in, Youp Schmit and Jamie Howard landed also great Shifties.

One rider to mention, who made it into the next round is Adam Sims, who also had a great heat and landed a one footed Back loop in his comeback event after his spinal surgery.

We were really impressed about the level of the first round heats. The level is extremely high and also the younger riders are pushing.