The Slalom event in Tenerife, which was scheduled for the end of October is now also cancelled. PWA: “Unfortunately, despite the best efforts of our local partners, the Tenerife Slalom event will not take place in 2022 as we had hoped. The work and finances raised for the 2022 event will now be deferred to 2023, when the event is expected primarily to return to its traditional August slot as a wave event, with the possibility of having slalom at some point too.”

The Fly! ANA Windsurf World Cup in Yokosuka, Japan is officially confirmed and will be another welcome stop to return to the PWA Tour after a COVID induced absence. In its new November calendar slot, the action is expected to be intense with stronger winds, as the slalom fleets fight it out for final 2022 honours.”

The latest addition to the calendar is a Youth & Junior Slalom event in Alacati, Turkey in November  16 – 20.

Despite the best efforts of the PWA, Ayuntamiento de Pajara, the Rene Egli Centre and Melia Group, over months of hard work and planning, and despite the funding for the event being confirmed by the primary sponsors, some of the necessary permits required locally for the event to take place were still not available 3 weeks before the planned start of the event, preventing the final event contracts from being signed in good time. Due to the limited time remaining to make the final preparations for the event, the Ayuntamiento de Pajara took the unilateral decision to cancel the event for this year.

Although this is a frustrating decision for the PWA and for the Rene Egli Centre, and that there were still further possibilities to explore to safeguard the event from our point of view, we understand the decision of the Ayuntamiento and the practical reasons why they felt they had to take it.

The Fuerteventura World Cup is an iconic event that has spanned over 30 years and seen some of the best racing, speed and freestyle competition in the history of the sport. That longevity and pedigree is largely thanks to our partners at the Rene Egli Centre, who’s experience and expertise play an irreplaceable role in making the event run smoothly, efficiently and successfully year on year.

The event would also not be possible without the support of the local community and the Ayuntamiento de Pajara, who welcome us to their beaches, and provide the financial and logistic support to allow us to bring the highest level of competition to Fuerteventura, and we look forward to continuing these successful and prosperous relationships for many years to come.

We want to thank our colleagues at the Rene Egli Centre, Melia Group and the Ayuntamiento de Pajara, for their time, consideration and dedication to trying to make the event happen for this year and we are reassured to know that much of that work will be transferrable to the 2023 event, for which preparations are already firmly underway. PWA

The Tenerife World Cup will not take place in August as planned but has now been repositioned to the autumn for 2022, to adapt to changes in the funding schedule and make use of work that has already been done in securing the event for this year. We will bring you further details as soon as arrangements are finalised. The event is expected to return to its traditional summer slot for the 2023 season. 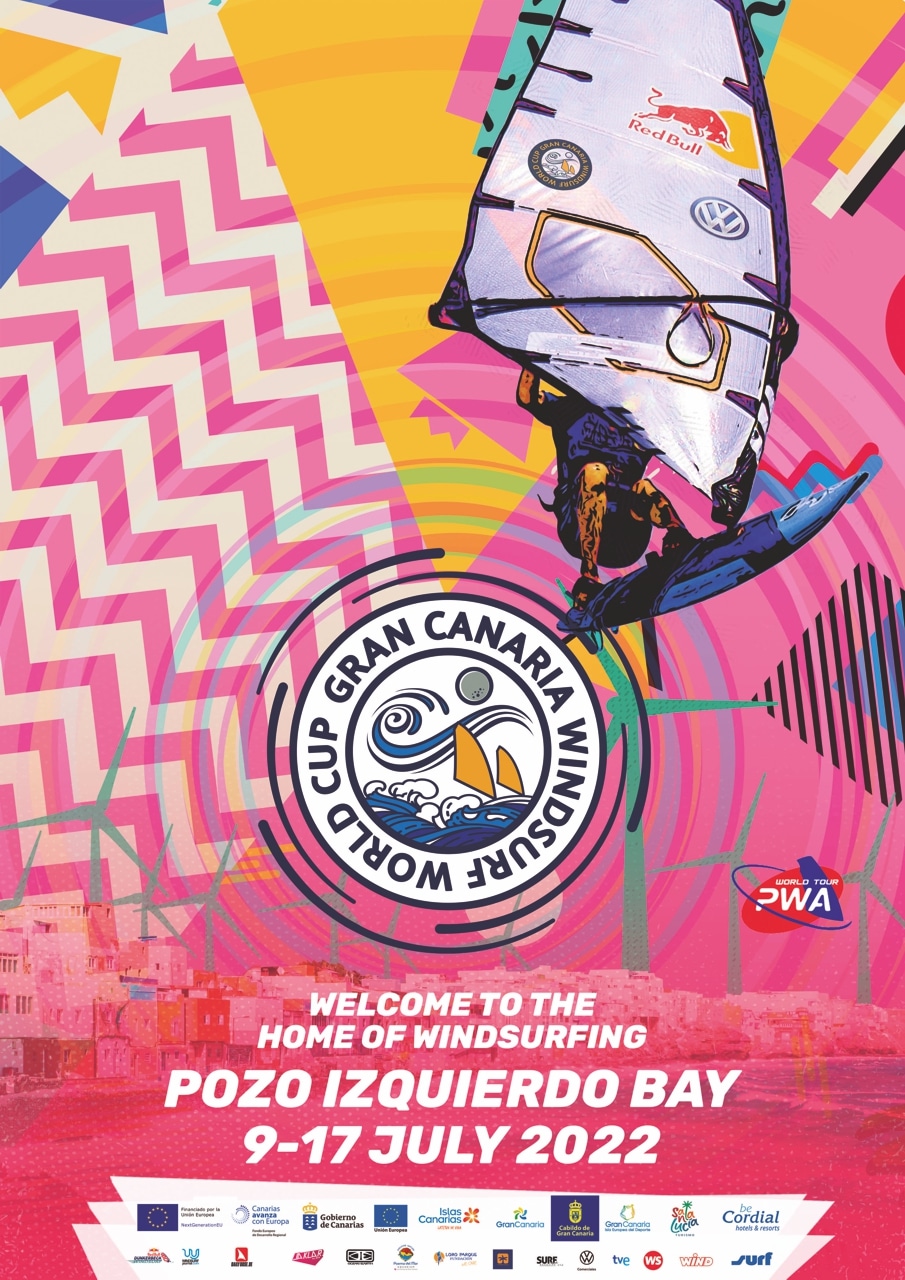 The PWA announced the cancellation of the Tiberias World Cup 2022. Just 3 racing events are left on the 2022 tour calendar and two of them are confirmed.

Sadly, the Tiberias World Cup will not now go ahead. Despite the very successful event last year, this year’s possibilities have been hampered by an unrelated split within the group of companies involved in organizing the event in 2021, and the event will not take place in 2022. PWA World Tour 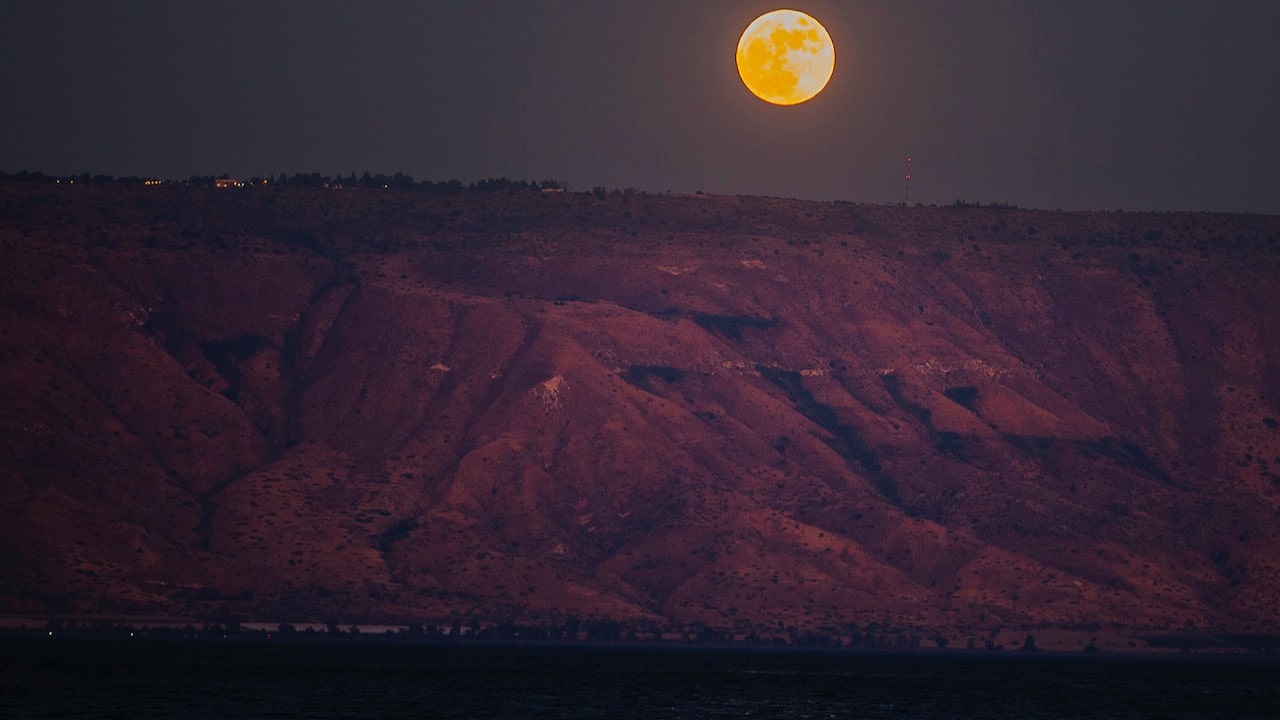 The Tiberias Lake will not see any PWA racing in 2022(Photo: PWA/Carter)

Postponement of the Lake Garda event 2022 until early summer 2023

We are working hard to ensure that we maximise the possibilities from this season, now that restrictions are starting to lift around the world, although there are still challenges in the wake of 2 years of lockdowns and limited tourism. As a result, the key partners in the planned Like Garda World Cup have decided to postpone the event until early summer in 2023, which will be more beneficial for the region, and when any remaining issues stemming from the pandemic should be more firmly behind us. The intended dates will be the second week of May next year.PWA World Tour

The PWA still has 5 Slalom, 3 Wave, one youth Wave & two Freestyle competitions on their 2022 calendar.

Cancellation of the Maldives Slalom 2022

Unfortunately, the tourism authorities in the Maldives have requested that all events planned for 2022 be pushed back to 2023, they have cited continuing uncertainty over the COVID situation for their decision. This is a blow for this year’s tour but, in conjunction with our partners in the region, we are already working to finalise the 2023 event, so we are hopeful of a successful outcome. The other events that were being worked on for the period before the end of May have now been pushed back to later in the year, so we do not expect any additional events to go ahead before June. PWA World Tour

The PWA still has 8 pro events and one youth only event on their 2022 calendar: 6 Slalom, 3 Wave, one youth Wave & two Freestyle competitions

BIG NEWS: A spectacular start to the season on Sal, Cabo Verde

The PWA announced an early season highlight with their green light announcement for the Cabo Verde Wave World Cup in Sal in February 20 -28, 2022. We can expect big conditions and great wave sailing by women and men (women will compete for the first time in Cabo Verde) at the home spot of the legend Josh Angulo, who won the event in 2007 (final against Kauli Seadi) and celebrated the victory with the home crowd. Josh became a national hero. Let’s see if he will attend in the event in 2022 and if Kauli, Kevin, Jason, Levi, Keith, Kai and a few other big names will show up. 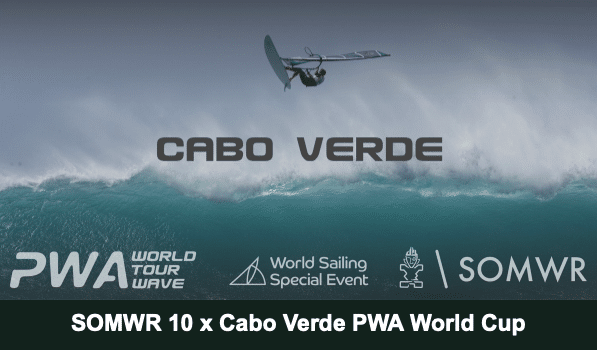 Known for its perfect peeling Atlantic swell and side offshore winds, Cabo Verde offers with its world class point breaks some of the purest wave riding conditions anywhere on the planet. Bursting on to the tour in 2007, the main break at Ponta Preta delivered some of the biggest surf ever seen on tour. 15 years after that spectacular inaugural event, all eyes will be on the West African archipelago to see if it will conjure the same magic this year.

We are pleased to confirm that the PWA Tour will return to Cabo Verde for the SOMWR 10x Cabo Verde PWA World Cup in just under 3 weeks. An event and venue that can only be described as legendary in PWA history, the latest edition of the event will be the next in the series of 10x Carbon Positive events brought to you in conjunction with SOMWR, the PWA’s environmental partner. PWA Tour management

Announcement of the 2022 PWA Tour Calendar

The PWA announced its 2022 competition schedule on January 18, 2022. 2 freestyle events, one youth wave event, 5 wave events & 7 racing events are on their 2022 provisional tour plan. 4 of 11 events still need to be confirmed.

After 2 years of the significant challenges and limitations of the COVID pandemic, we are looking forward to being able to return to a more complete season of windsurfing competition, at the highest level, across all the disciplines. Since the end of the 2021 season, the PWA team have been working tirelessly in conjunction with our new sailor committees, and this year is shaping up to be an exciting one. In addition to the events published here, there are numerous others in the pipeline that we hope to be able to bring you news of soon.

With the return of some old favourites, and some great new destinations, the 2022 PWA Tour will once again reach out to a range of truly global destinations, to bring you the finest athletes in the sport, competing for the ultimate honour of being crowned PWA World Champion. We look forward to seeing you online, on the beach and on the water soon! The PWA 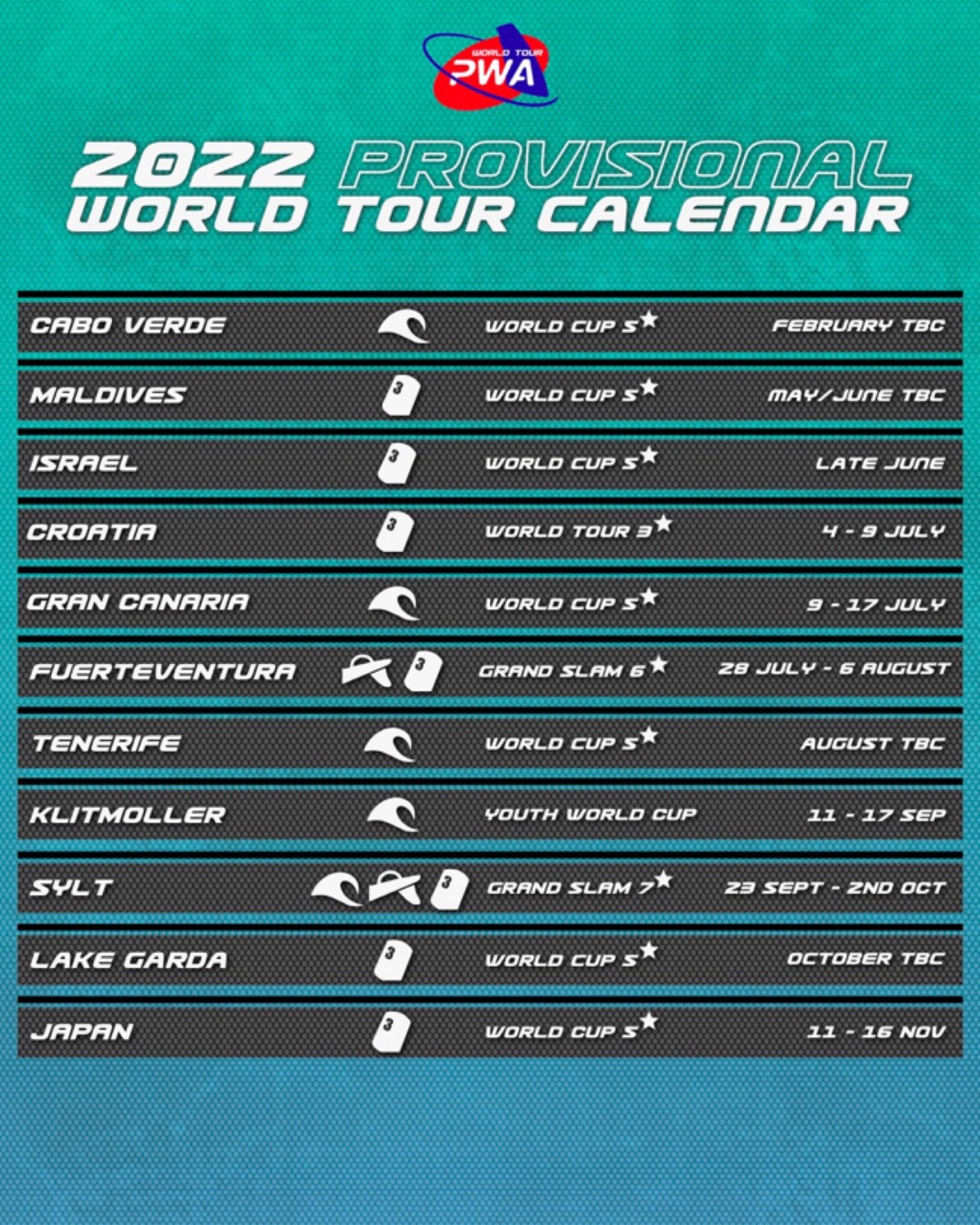 After all this craze no matter how its called we demand at least some proper WINDsurfing for 2022.

Make the FPT the official freestyle title and drop freestyle from the PWA.

Why not. The PWA could run a Freestyle World Championship in Fuerteventura instead. Kind of Freestyle X-Games. It’s quite windy during summer and daily live stream can be almost guaranteed. But keep in mind what the EFPT CEO Adam Sims announced about that topic by the end of December 2021. The EFPT is our effort to create feeding tours for the PWA World Tour, whom we work closely together with, from multiple continents. It is not just about the grassroots of freestyle competitors, it’s also the grassroots of event organizers, a place where they can build their events up through… Read more »

Sounds like a good idea to me, would still make Fuerte entertaining and worth attending!
That was indeed what he said but he couldn’t exactly come out and say he was planning for world domination..
Assuming all riders attended all events and each had a separate winner, it would be hard to see how the world champion could come from a tour with 2 events vs a tour with 8.

It’s all up to the tour managers and the industry, what they want. And of course, the riders can influence decisions with their interests. Let’s see what will happen in the future. If we take the number of events as an indicator of the size and importance of the discipline, then the FPT would have to host the Freestyle Tour, the PWA the Racing Tour and the IWT&PWA the Wave Tour. But of course there are also other arguments that influence decisions, like prize money, event management, general management, event locations, rider levels, interests of different parties… The existence of… Read more »