Italian Matteo Iachino and Delphine Cousin from France are the winners of the 2018 PWA Slalom in Jinha, South Korea. Brazilian Mateus Isaac won the foil competition, which is his first victory at an PWA event. 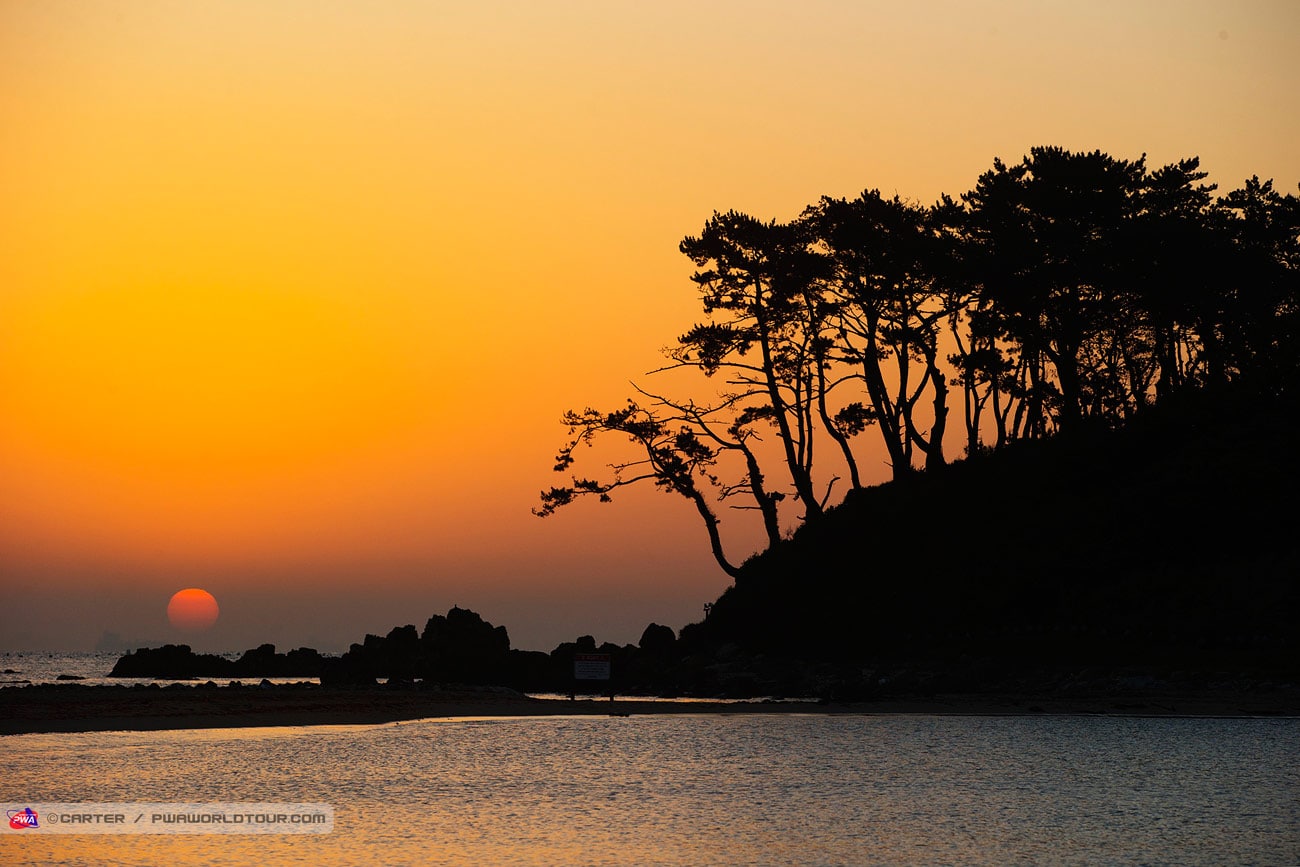 Day 6, the final day of the event, saw wind from the thermal directions with gusts up to 20 knots+. The PWA crew held 4 men foil eliminations with 4 different winners: Mateus Isaac, Amado Vrieswijk, Antoine Albeau and foil tour leader Gonzalo Costa Hoevel. In the end it was the 24 year old Brazilian Mateus Isaac (BRA-767), who won his first PWA event. Gonzalo made it in 2nd and kept the overall lead. French Formula World Champion Alexandre Cousin completed the podium.

Day 3 started with enough wind to complete elimination 4 of the men. Due to the lighter wind and smaller swell a lot more rubbish and seaweed was on the course, which brought a few upsets. Maciek Rutkowski, who was leading the winners final of elimination 4 with a good lead crashed hard just before the third jibe mark, broke his board and harness hook. But luckily he didn’t get injured. Antoine Albeau and Enrico Marotti struggled with seaweed, too. In the end Matteo Iachino won the fourth elimination and defended his first position in the ranking against his hardest rival Antoine Albeau, who is just 2 points behind. Pierre Mortefon is in 3rd overall and Brazilian Mateus Isaac made it in fourth with a great second place in the fourth winners final.

The women ran elimination 6. It was again Delphine Cousin, who won her third elimination in South Korea in 2018 and she is in a clear lead. Lena Erdil, currently second overall was in leading position but crashed at a jibe and lost a lot of ground. Maelle Guilbaud and Marion Mortefon are very close behind the Turkish rider.

Strong wind with 25 knots+, big waves and aggressive chop brought interesting slalom conditions on day 1. The Frenchman and reigning Slalom World Champion Antoine Albeau won the first men’s elimination ahead of Maciek Rutkowski, the surprise of day 1 and in third Matteo Iachino.
The women saw two eliminations. Delphine leads with a second place and a bullet. Jenna Gibson from the UK was the surprise. She won her first winners final in her career and is in second place at the moment.

The conditions were extremely challenging with wind up to 40 knots in the gusts. Imagine, Antoine Albeau was on 6.4m in a few heats and Lena Erdil or Maelle Guilbaud were on 5.0m sails. The speed was incredible high on the race course and a few riders crashed really hard due to the rough sea, rubbish or seaweed in the water. Unfortunately Austrian Marco Lang had to stop to compete. He didn’t feel well and an ambulance brought him to a hospital. We wish a quick recovery.

The ladies completed 3 eliminations on day 2. French leader Delphine Cousin was the most consistent, winning 1 elimination and taking second in elimination 5. Lena Erdil, her hardest rival, had the chance to take the lead, but failed in the final race in stormy conditions. Maelle Guilbaud from France managed to win her first elimination in her career and jumped in third position overall.

In the men’s fleet we saw an extremely hard fight of the top ranked riders Matteo Iachino, Antoine Albeau, Pierre Mortefon and Jordy Vonk. These are the names, who battle for the podium spots in South Korea. Unfortunately it wasn’t possible to complete the fourth elimination, which will bring the first discard.

What does “etc.” below 10th place in the results mean? Is there a logical sequence in the spelling of the names from 1st to 10th that you can deduct the name of the 11th place rider from?

Thanks for you input, we appreciate it. My Latin Lessons are long ago, but you are right, we ‘ve used this term a bit dismissively.
How about ‘et alii / et al.’?