Day 6 of the SOMWR Movement 10 x Marignane PWA Grand Slam proved to be the best day of the event thus far, which enabled the Freestyle single eliminations to begin in Carro after an early morning skippers’ meeting at 8:00 am. The action was on from 9:35 am. Le Carro is one of the best wave spots in the region around Marseille, when a swell from the Mediterranean Sea hits the coast. On day 6 the conditions weren’t good for wave sailing, but quite suitable for freestyle windsurfing as long as the wind didn’t shift too much off shore.

Conditions weren’t easy at all with the bitterly cold wind adding an extra dimension of difficulty, whilst choppy water and winds varying between 12-25 knots ensured the best freestylers in the world endured a tough test. However, after over two years of no PWA freestyle contests, most competitors were just happy to be back in their competition jerseys battling it out against the best in the world. 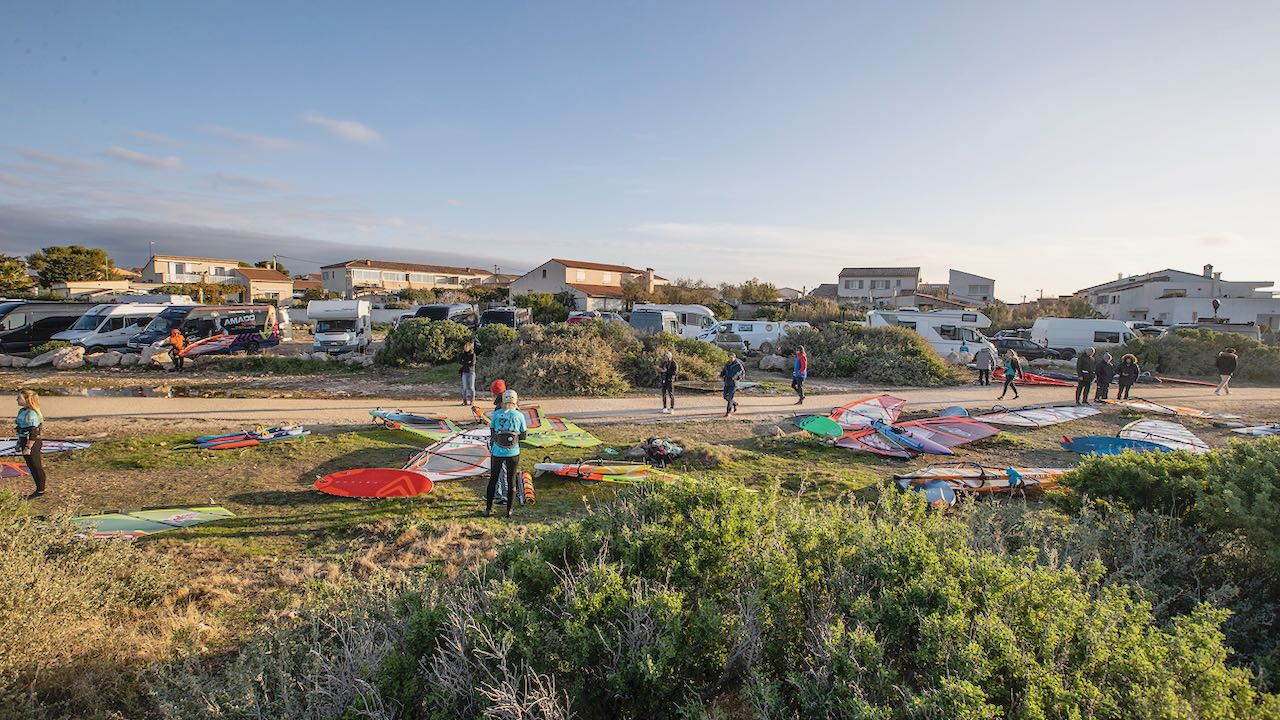 With the crème-de-la-crème of the freestyling world back on centre stage there was an array of world class moves as you would expect, whilst there were several close calls on an eagerly contested day.

3 women heats and 8 men heats are completed and the results are valid a few heats needed to be resailed – Yentel Caers vs Lennart Neubauer or Jacopo Testa vs Amado Vrieswijk. At 11:08 the AP flag went up for the first time and the single elimination was on hold several times.

The forecast for Thursday, day 7 of the event,  looks as though there may be a chance of completing the Freestyle competition in the early morning hours. 2 hours of suitable conditions would help to get it done. WindGuru currently predicts 12-18 knots for Carro. With this in mind, the Freestyle fleet will meet again tomorrow morning at 8:00am with the action commencing from 8:30am onwards – if conditions are suitable. The Slalom fleet will have their skippers’ meeting at 10:00 am in Le Jaï – with a first possible start at 10:30am. Let’s keep fingers crossed!! 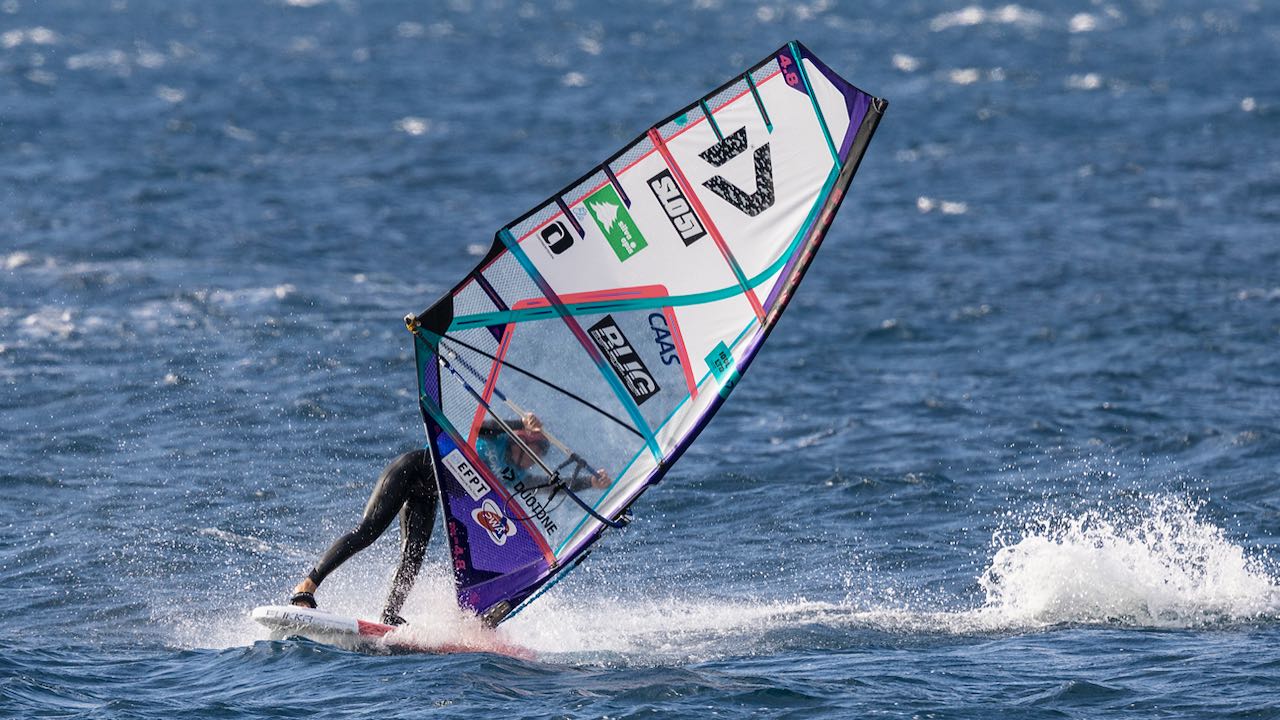 World No.3 – Oda Brødholt – produced a polished display in the quarterfinals against – Lina Erpenstein – who was making her debut on the PWA Freestyle scene. The Norwegian had too much firepower for Erpenstein to safely progress into the top 4. In the semifinals, Brødholt, will face vice-world champion – Maaike Huvermann  – after the 23-year-old eased her way past 17-year-old Salome Fournier – who was also making her debut on the World Tour. Brødholt and Huvermann have plenty of history against each other, so it will be intriguing to see who comes out on top this time around if there is enough wind.

I had a lot of fun. It was just nice to be back out on the water. It was actually very windy during my heat – I was on 4.4m and it was pretty choppy. I could’ve sailed a better heat but it was a bit weird after two years break on the PWA tour (Maaike competed on the EFPT), so it took a bit of getting used to, but yeah, it was a lot of fun to be back.Maaike Huvermann about day 6 in Carro

Heat 14 saw 12-time Freestyle World Champion Sarah-Quita Offringa in action for the first time and the Aruban delivered her usual high standard of performance. She showed off power moves on both tacks and had the high score of the day with 88.1 points. Oda Brødholt had 77.7 and Maaike Huvermann 72.9 points on her score sheet. Waiting in the semifinal for Offringa will be Youth Freestyle World Champion Lina Eržen from Slovenia. The 16-year-old produced an excellent display to see off the challenge of Olya Raskina. Brødholt, Huvermann, Erzen or Offringa still can win the single elimination. 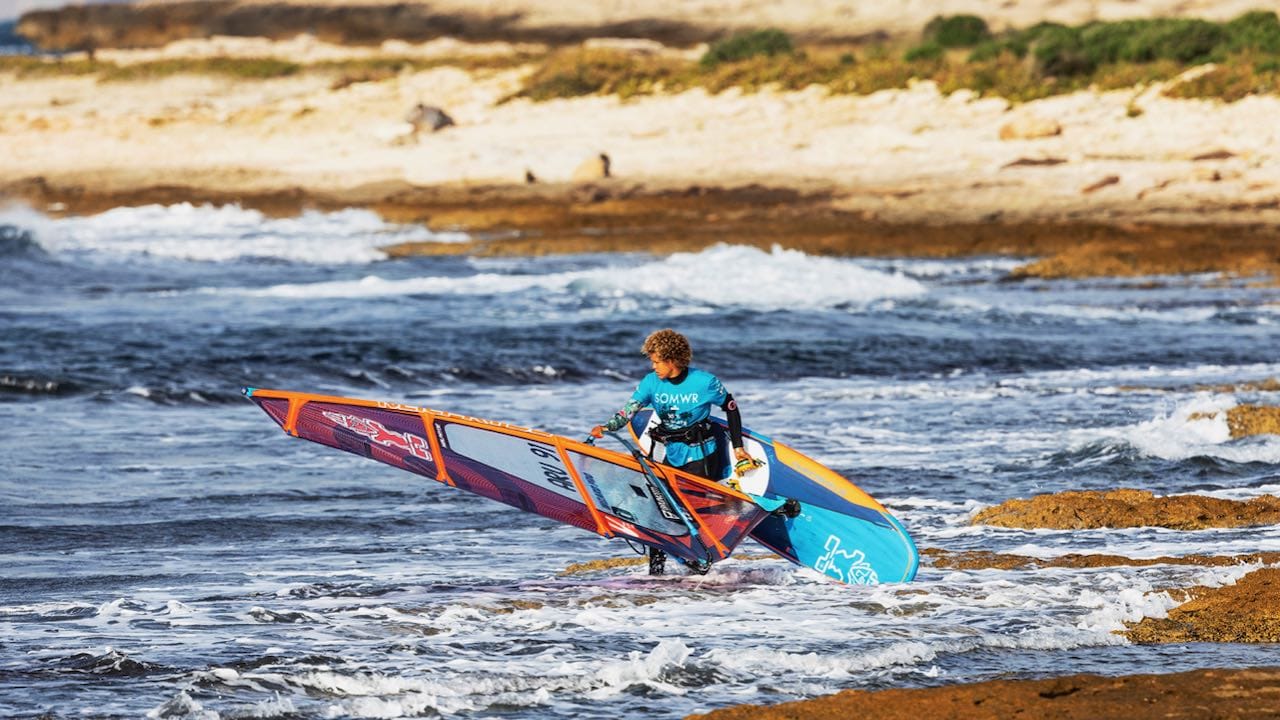 The main talking point in the first round surrounded Balz Müller as the Swissman became the first sailor to compete on a foil during a freestyle heat. The 27-year-old is well known for pushing the level of Foil Freestyle through the roof. Müller would advance through the first round by boosting moves with far greater height than anyone else and many of the field would have feared facing him. Unfortunately, the wheels came off slightly in the last 16 with too many crashes, which is something you can’t afford against the highly talented Adrien Bosson. 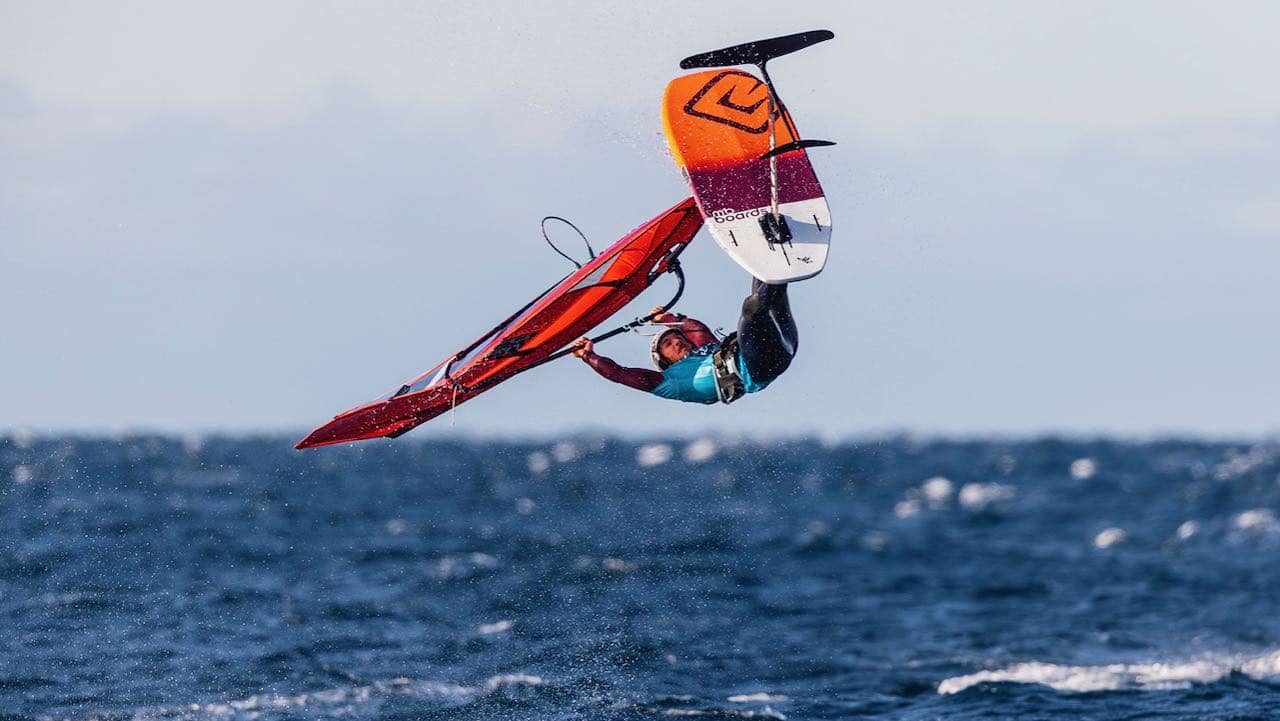 It was a great experience. The conditions weren’t that great for foiling and I know it wasn’t perfect for fin either. It was very challenging for everyone, but I landed some big moves. Unfortunately I had too many crashes though and you can’t afford to do that. It’s always the same in competition you want to go big, but know you should play it a bit safer to get some points on the board, but I can’t make myself do that. I always overcook it because I want to show what is possible on the foil. It’s a shame we didn’t get the single finished, but hopefully, there’s enough wind to get it finished tomorrow. The beauty of the foil is that we could’ve run the whole day, so that’s a bit of a bummer. Hopefully, in the future, we will see more people competing on the foil as that will allow us to gain a result when it’s not windy enough for fin freestyle. It’s an exciting time for the sport as there are new tricks being landed every day – particularly on the foil. It’s a great time to be alive.Balz Müller about competing on a foil in an official PWA Freestyle competition for the first time

After winning a close first heat against Antoine Albert 9 times PWA freestyle World Champion Jose ‘Gollito’ Estredo produced a dominant display versus Steven Van Broeckhoven to book his place in the top 4. The Venezuelan is chasing a 10th world title and if the wind plays balls you certainly wouldn’t bet against it off of the back of his performance today. Gollito produced the highest heat score of the day with 4 moves of 7 on each tack counting.

Gollito is currently the only sailor to have booked his place in the semifinals as unfortunately after the completion of Heat 13a the wind started to become marginal. Several heats were attempted but had to be cancelled due to the lack of wind.

In Heat 10 Jacopo Testa came out on top against Antony Ruenes to set up a tie with Amado Vrieswijk after the Bonairean defeated Dudu Levi from Israel. Their quarterfinal was sailed once, but it was eventually cancelled much to the annoyance of Testa.

I sailed some good heats, but then in the end they started to cancel and resail heats, which is something I would have something to complain about, but let’s see tomorrow, hopefully, we get some wind.Jacopo Testa about the day 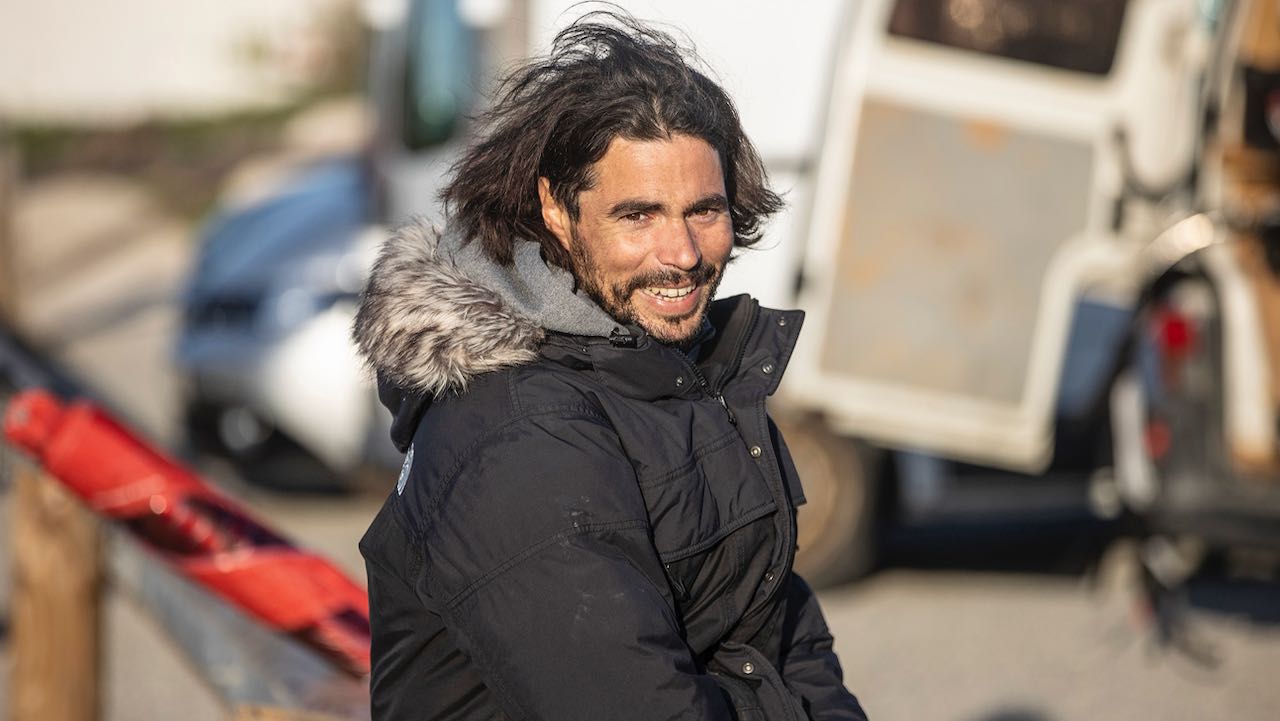 I think we were pretty lucky with the conditions that we got today as the forecast wasn’t the best. In the end, we were able to finish some heats, so fingers crossed maybe tomorrow there’s enough to get it finished.Antony Ruenes

As previously mentioned Adrien Bosson negotiated his way past Balz Müller in Heat 11a with the Frenchman looking very fluent on both tacks. The 2018 vice-world champion will now face Youp Schmit in the quarterfinals after the Bonairean ended the hopes of French legend Nicolas Akgazciyan. Their last 8 battle also began, but it soon fell to the same fate as Testa versus Vrieswijk.

Today we had a great day of windsurfing. At the start of the day the wind was strong with some guys on 4.4s and flying. Sadly though the wind dropped on us and we couldn’t finish the top 8.Youp Schmit about the first day with freestyle action in Le Carro, France

Sam Esteve took on former PWA Freestyle World Champion Dieter van der Eyken in Heat 12a in what proved to be one of the tightest battles of the day with the lead continually changing hands with both sailors trading blow-for-blow. In the end, though it was the Frenchman who would advance after landing a massive Air Skopu. Esteve will now face Yentel Caers in the fight for the top 4, but the reigning world champion didn’t have it all his own way today.

Caers faced Youth Freestyle World Champion Lennart Neubauer in Heat 12b and it was anything but plain sailing. The highly rated Greek from the island of Naxos already is on everyone’s radars and rightly so after today’s performance. In the end Caers needed a re-sail to defeat Neubauer as in their opening battle the 17-year-old landed a new move called the Mitato (in the second attempt), which made it look as though Neubauer had caused a major upset. However, after some disputes about the scores it turned out that Caers had actually won the heat, but in the honour of sportsmanship both sailors agreed to a resail. The next time around Caers left nothing to chance as he posted the highest scoring heat of the competition thus far – 115.4 points – (whilst it was still the best 3 moves from 6 counting on each tack) and the reigning PWA Freestyle World champion from 2019 marches on after a slight scare. 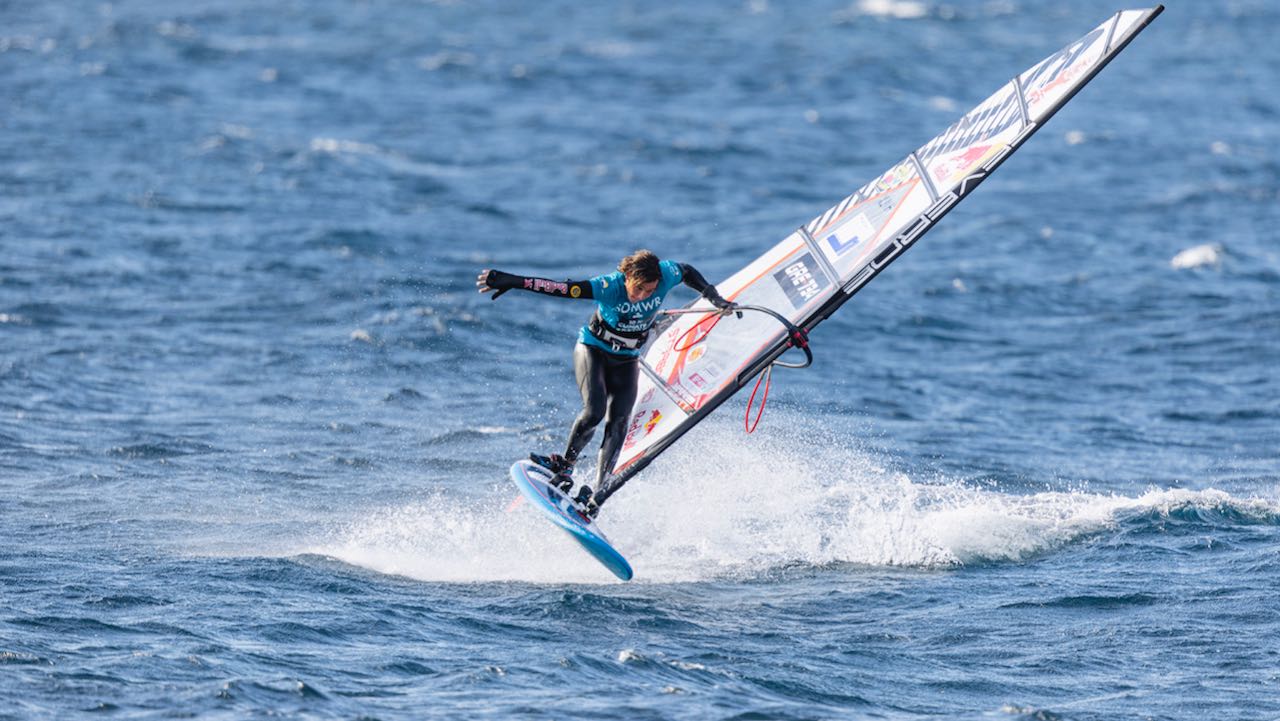 Lennart Neubauer shows a new move, the Mitato, in his heat (Photo by Carter/PWA)

Conditions were better than it looked from the beach for me. I enjoyed my heats. It was also fun to sail twice against Yentel. Next time I hope I can get him. I landed a new move called the Mitato. It didn’t score quite as well as I would’ve expected, but it’s just cool to land a new move in competition. I think it’s also the first new move to be named via a Greek name, so I’m also happy about that.Lennart Neubauer after landing a new move, but just missing out on a place in the top 8

In the men’s fleet are still seven riders left, who can win the single elimination: Estredo, Caers, Esteve, Bosson, Schmit, Vrieswijk or Jacopo Testa. The heat from 13b onwards have to be sailed still. Heat 13b (Vrieswijk vs Testa) has to be re-sailed. 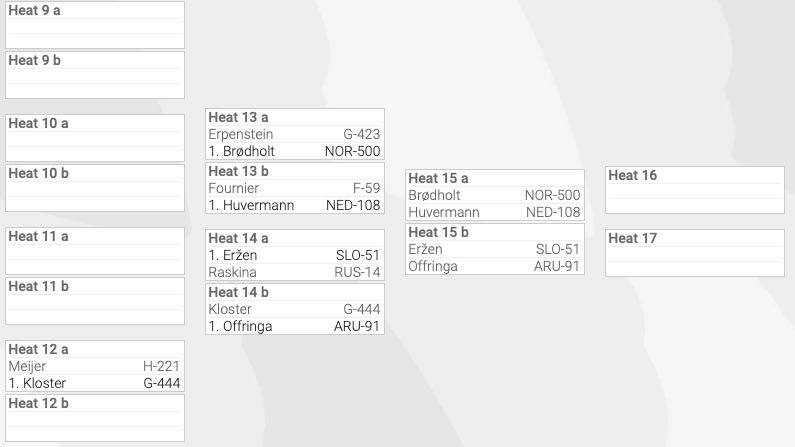 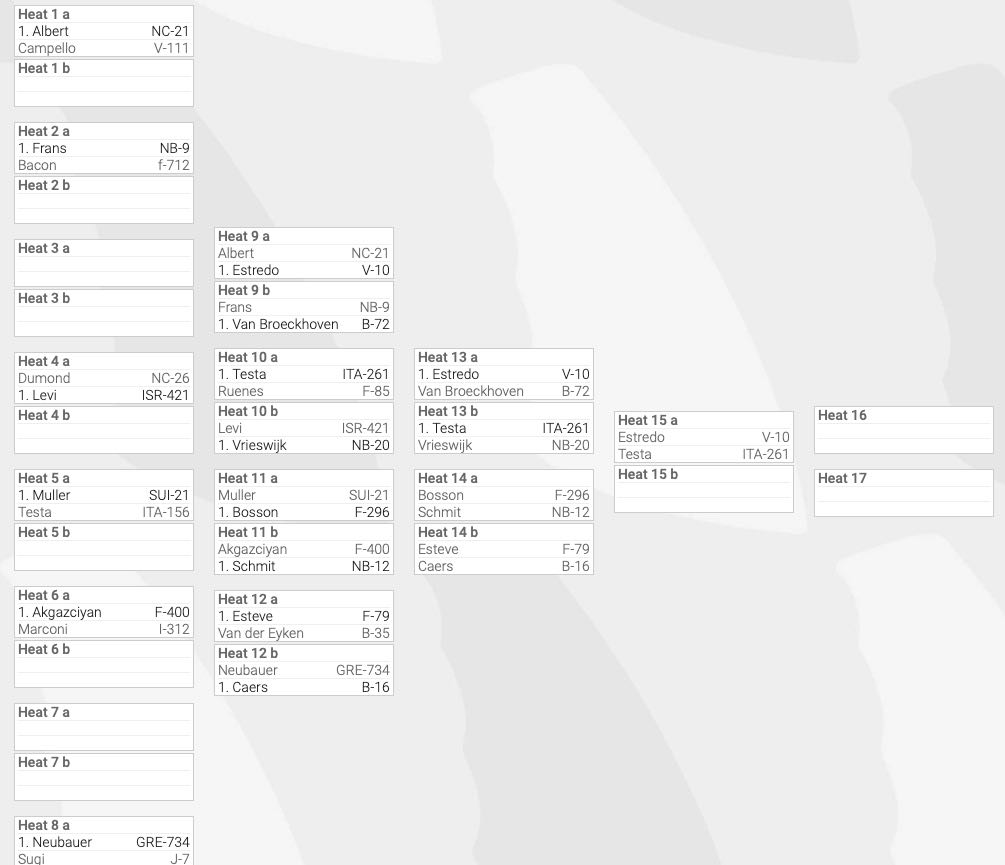