A marginal forecast for the morning of Day 7 of the 2021 SOMWR Movement 10 x Marignane PWA Grand Slam, presented by Greentech Festival, proved to be just enough to allow the Men’s and Women’s Freestyle Single Eliminations to be completed in light, tricky conditions. So, whilst today may not have been the power freestyle we have come to love in recent years, it was still an intriguing battle. Sailors were given 10 minutes in the Women’s Finals and 12 minutes in the Men’s Finals to show off what they can do in the lighter airs. This meant that today came down to patience, so holding your nerve was critical given the longer heat duration, with still the best 3 moves from 6 to count. Waiting for the right gust often proved pivotal. It also tested the sailor’s technical ability to the max as they still attempted to land the biggest moves possible in the light winds.

As it stands, Sarah-Quita Offringa, is now on the verge of claiming an incredible 13th Freestyle World Championship, whilst Amado Vrieswijk’s wait for a maiden world title could finally be over after defeating Adrien Bosson in the Winners’ Final. Vrieswijk has been on the cusp of being World Champion on 3 occasions – losing out on a tiebreak in 2016 to Gollito Estredo, finishing as the vice-world champion in 2017, whilst missing out on the world title in 2019 despite winning two out of the three events that season. It’s been a long time coming for the 25-year-old, but with almost no wind on the horizon, it looks as though the wait for his first world crown may finally be over and I don’t think any sailor would begrudge him of that honor having been so close on so many occasions before. 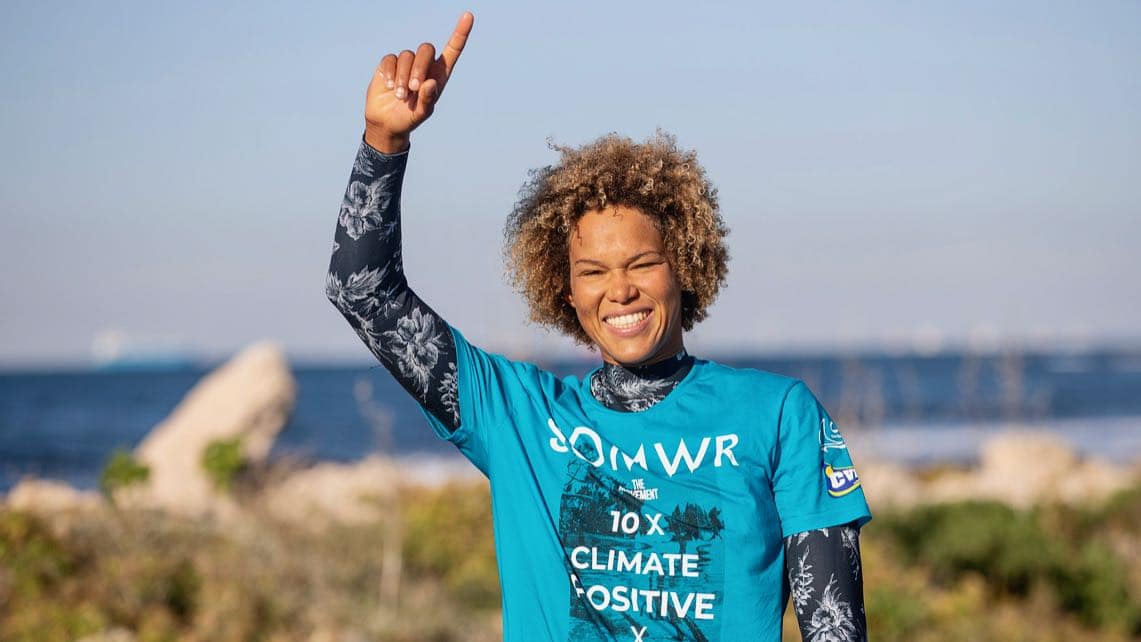 Sarah-Quita Offringa defeated Lina Erzen and Maaike Huvermann Oda Brødholt in the semi finals. So 12 times PWA Freestyle World Champion Sarah-Quita Offringa faced another battle against her long time rival Maaike Huvermann in the Winners’ Final and it turned out to be another exciting affair. Huvermann is the only woman to have won a heat against Offringa in 13-years – having won the Double Elimination Final against the Aruban in Bonaire in 2019 – and she put up a solid challenge again. At the halfway stage things were evenly poised, but then, as she so often does, Offringa raised the bar by landing two power moves – a Culo and a Burner on starboard tack – despite the light winds. This ultimately proved to be the difference. Watch the freestyle final of the women!

Honestly I didn’t even think that we were going to compete today. Then I got to the beach and it seemed windy, but the other days it hasn’t really been coming to the shore. Then at the skippers’ meeting, we were told that it would be on and the women would be up first. I was like ‘oh man, now we’ve gotta go first’, but I think that kind of switched my mindset and got me up for it. I went out on my 5.2m – to be honest, I think my better heat was the semifinal, but then the heat after I saw the guys looked really powered up, so I dropped a sail size for the final. I’d also just like to quickly say congrats to Lina Eržen – I’m happy I got to sail against you. In the final I took 4.8m, but the wind dropped a bit, so my tactic was just to get in the moves. I didn’t go for my highest scoring moves, but I just concentrated on filling my scoresheet In the end though I managed to land a burner and I think that is the move that made the difference as I got a lot of points for that one. By the end of the heat I still wasn’t sure that I’d won, but I was satisfied as I’ve made a lot of progress this year and I did what I could in the Final. Whoever won, I think I would’ve been equally as happy for Maaike. I was pleased and relieved to hear some cheers when I got back to the beach to confirm that I’d won. Sarah-Quita Offringa about her performance on the second day of the single elimination

Huvermann will still be happy with her performance, sailing with style and consistency throughout, but for now, Offringa still proves to be elusive target. Oda Brødholt currently completes the top 3 after producing a fine display to defeat Lina Eržen  in the battle for third and fourth. 16-year-old Eržen though should be delighted with her efforts over the last couple of days and the young Slovenian looks set to earn her best result – 4th – whilst also being a name to watch in the future.

Amado Vrieswijk is one of the heaviest freestylers on the tour, so with today’s marginal and dying winds, it looked as though things weren’t really going to be stacked in his favour. However, the Bonairean made a fine start against – Adrien Bosson – in the Winners’ Final by landing a Spock-Culo and from there 25-year-old never really looked back as he claimed a clear-cut victory against Bosson, who just couldn’t find the gusts he needed to really ever try and mount a comeback.

My first heat against Jacopo was the windiest I think, so I was very lucky with this because Japo is a machine in light winds. I was very happy to be able to win against him and then I had Gollito, who is very quick onto the plane and also incredible in competitions, so I feel like I sailed three finals today. In the final against Bosson, who is also amazing in light winds, the wind got even more patchy and lighter, so even in the gusts you didn’t have much power. I just tried to land the best moves, or hardest moves I could, with the power I had. I think I maximized what I could do with the wind we had today. Amado Vrieswijk about his final back on the beach

When prompted on the fact that if there is no more wind, which looks like the most likely scenario, that he will finally get his hands on a first world title.

In the last 5 years I’ve been in this position many times. I lost two titles in Sylt to Gollito, whilst I was standing still for 5 minutes in the heats. Last year I lost against Yentel due to the scoring system. If you look at the points I actually won the title, so now to hopefully get my hands on the title after one event feels good.Amado said after he won the final of the single elimination

The Frenchman sailed brilliantly in the semi-finals to defeat – Yentel Caers – but couldn’t replicate that same standard in the final with Bosson failing to complete his scoresheet, which is very unusual, but it also gives an indication of just how light the conditions were.

It was very light out there, but I think with the forecast we had we were very lucky to be able to run the contest. We were all on our big equipment – 5.2s and big board. It’s great that we managed to get the result and complete the Single Elimination. I think this was just the second time I was using the 5.2 so it felt a bit weird – it’s definitely not my normal sail. Usually, it’s so windy here, so we’ve just been very unlucky with the forecast. My first two heats were okay today, you really needed to wait for the right gusts to do your moves. In the final it was really on the edge. I’m not even sure I completed my scoresheet. I’m still happy, it’s good to be back competing again! Hopefully there’s more to come next year. Adrien Bosson discusses today’s conditions

Yentel Caers faced 9-time Freestyle World Champion Jose ‘Gollito’ Estredo in the fight for third and fourth and the 2019 world champion was able to overcome the King of Freestyle to claim the remaining place on the podium – for now at least. The Belgian just lost out to Bosson in the semifinals with just 3.6 points separating the two sailors and the 26-year-old produced another typically powerful display to hold off Gollito. 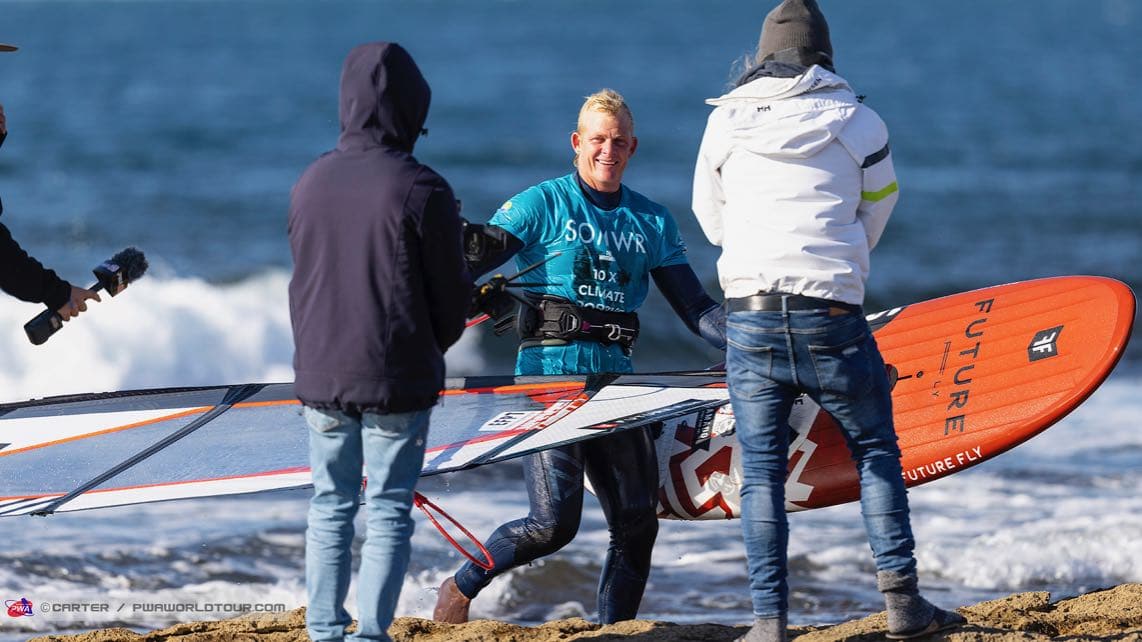 Amado returns to the beach after winning the final heat of the single elimination (Photo by Carter/PWA). It’s probably his third, but most important international event victory in the 2021 season. He already won the EFPT events in Austria and Greece.