The video about the finals day of the IFCA Wave Europeans at Fish Factory, produced by FYMproductions

Lina Erpenstein and Marc Pare are the winners of the production board IFCA Wave European Championships in Denmark, September 17 -23. Anton Richter, who was forced into a super final by local Tobias Bjoorna, wins the under 17 category and Simon Kristensen is the winner in the U21 category. 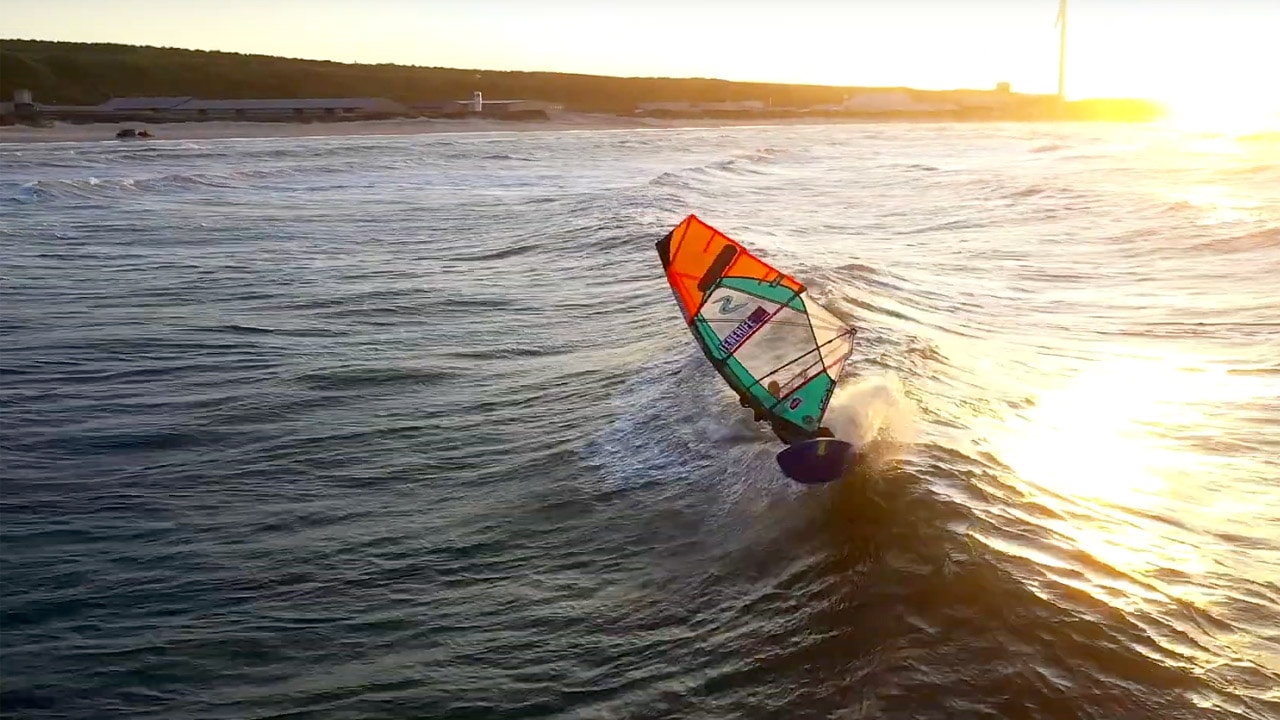 Marc Pare about his victory:

“Well, first of all it feels amazing to win an event like that with such a high a level. I love Cold Hawaii in Denmark and it’s great to have an event here again. For the single elimination we had some really good and strong conditions in the morning and then the wind started swinging more and more onshore throughout the day. With the lighter wind the conditions were super tricky in the final of the double elimination. On the first day I used 4,0 / 4,2 and 78L Flywave for the first heats and 4,7 and 90L Cortex for the final (I was underpowered though). Yesterday – it was day 4 of the competition – the wind swung more side shore and it provided some really fun conditions, with smaller but much cleaner waves and less current. I was super pumped up for the final of the double elimination as I really wanted to keep that first place. I gave it all in the final against Leon Jamaer, who sailed amazing and had a really good heat. I could put some pretty decent jumping and wave riding scores. Overall I’m mega happy to take the European Wave Champion title and to win the last final with a good performance!” 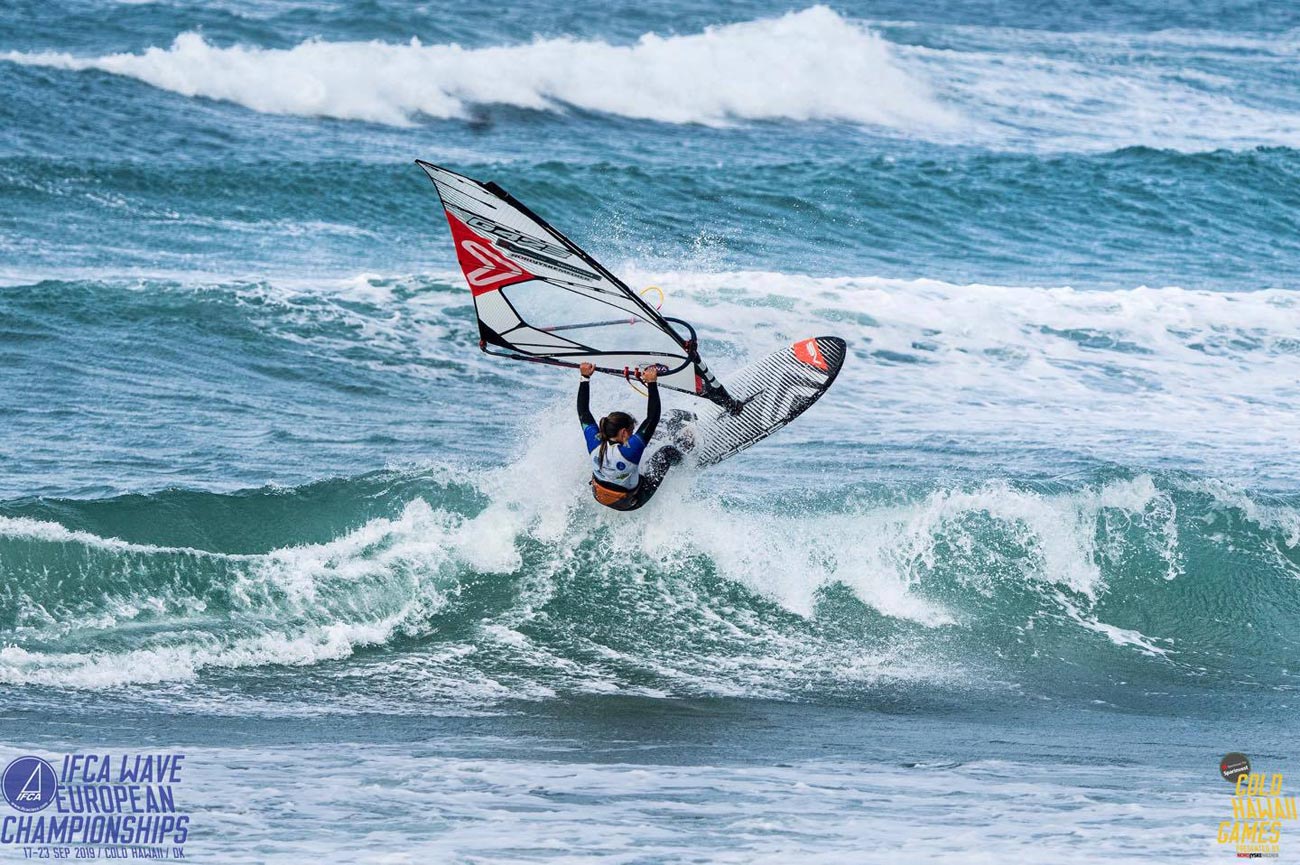 Lina Erpenstein about her victory:

“I’ve been coming to Denmark in autumn for quite a while now and it’s so cool to be competing here now. I’m super happy I could take the win in the end and also really excited that we got the possibility to promote women’s windsurfing here, too!
Also the local organizers did a really good job in converting the event into a roaming event so we could move to Hanstholm to enjoy the most suitable conditions for the competition. This must have been a lot of work, but has for sure been worth it, not only for us sailors but also to guarantee the best event possible. I sailed on 4.0 and the new Severne Nano 72l, my absolute favorite setup. The board just has an incredible top turn which helps me a lot, especially in the side offshore conditions we had for the double elimination.

Day 4 saw westerly to northwesterly wind and waves in Denmark and the riders moved to the spot Fish Factory located far west of Hanstholm. The conditions were fine, with side to side off wind for 4.5m to 5.3m sails. The first two days of competition took place in Middles, Hanstholm, 14 kilometers in northern direction from Klitmoller.  In the double elimination Lina Erpenstein and Marc Pare were able to defend their leading positions from the single elimination. Experienced Austrian Uli Hölzl managed to climb up from third into second place in the double in the ladies elimination. The biggest comeback of all riders had German Leon Jamaer, who won 5 heats in a row defeating Mads Bjornaa, Miguel Chapuis, Philip Köster, Antoine Martin and Julian Salmonn on day 4. In his 6th heat against Marc Pare the German was already pretty tired. Marc won in both categories, in wave riding and jumping. With 30.78 points versus 23.98 points of Leon the talented Spaniard won the final. There was no need to run a super final. 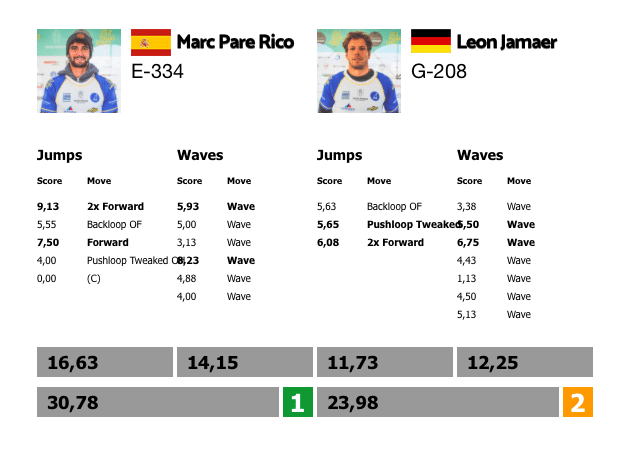 Final Results in the IFCA Wave European 2019 (production board), after one double elimination held in Middles and Fish Factory, Hanstholm, Cold Hawaii, Denmark