Dieter van der Eyken had his World Cup debut in 2010 with a 12th position overall. During the next years he increased his skills and performance and climbed up the rankings to 8th and 5th in 2013. And he is getting quite close to the top 4. In his final heat at Sylt this year, he almost stopped Kiri Thode’s worldtitle dreams, but lost by half a point in the end. On the EFPT tour he made it twice in 2nd place overall just behind his fellow countryman Steven van Broeckhoven.

This winter Dieter spent a lot of time on the water, in Western Australia and on Bonaire to prepare for the upcoming season. In the following interview he not only tell us about his months under the sun, he as well gives a sneak preview about his favorites for 2014. By the way, in 2013 he told us his favorites, too and he was exactly right. Let’s see, how close he will be this year!

We added some fantastic shots from Bonaire to the interview, taken by Dieter’s girlfriend Yolanda Smeets and “freestyle supporter” Markus Seidel from Germany. Thanks for that! And we wish Dieter a great season!!

Read the interview with Dieter about his preview on 2014

Continentseven: You sailed so much, man!! Not tired? Was it a perfect winter/spring so far?

Dieter van der Eyken: Hello Continentseven, so far the winter has been great! Australia was amazing with wind 85% of the time sailing in a lot of different conditions and Bonaire has been pretty good as well, not comparable to last year but still 70% wind so far I think, so can’t complain at all!

Continentseven:  What did you enjoy more, Australia or Bonaire?

Dieter van der Eyken: Australia definitely, I like Bonaire a lot as well but the freedom you have in Australia is something I really miss here on Bonaire. The life in the van is something I like and being able to wave sail and freestyle on the same day gives me always a lot of energy to push harder during the freestyle sessions. The only thing I miss there are other freestylers which is the reason why I also come to Bonaire because everyone is training here and this definitely pushes your level, because you don’t want to sail less good than the other guys, right? 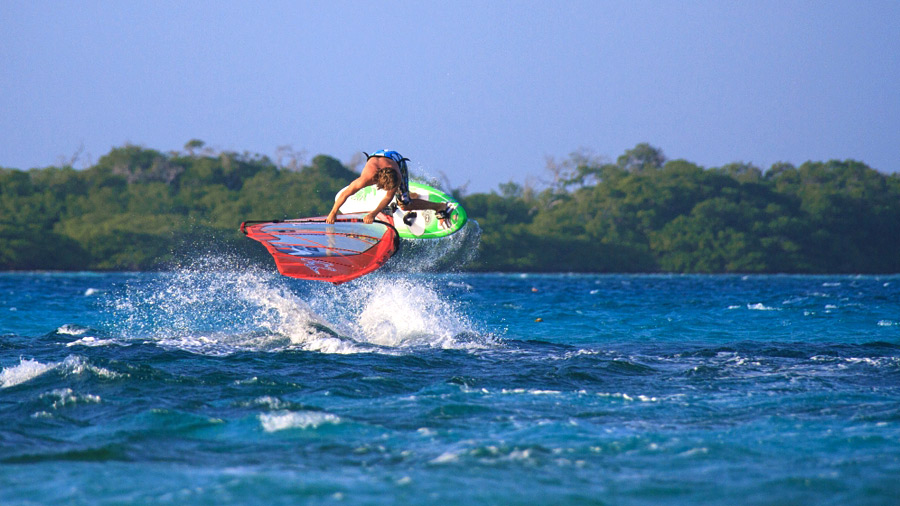 Continentseven:  Almost all big names are on Bonaire, except Steven and Gollito. How is the level?

Dieter van der Eyken: Well the level has definitely gone up again, consistency in the double air moves is pretty high here on both flat as the more choppy water and the local sailors are ripping obviously but so was everyone else actually. Almost everyone can do all moves both sides now, so competition will be intense in 2014 for sure!

Continentseven:  Is the world champion much on the water?

Dieter van der Eyken: Kiri is actually traveling quite a lot between the islands here (Curacao, Aruba and Bonaire) so not every windy day he is on the water here on Bonaire but sails pretty much whenever its windy and on the island he is for the moment. So have seen him sailing at least as much as last year.

Continentseven:  Who impressed you most?

Dieter van der Eyken: Definitely Amado Vrieswijk. I know him already for a long time and last year he was sailing already amazing but this year he really pushed his level up 2x. All the regular ducking moves he does perfectly on both sides pretty much (Kabikuchi, Culo and even double Culo) and his consistency in his double air moves is the best besides Kiri here for the moment. So he will get in the top 10 if not top 5 this year on the overall if he can do the same in other conditions than Bonaire. 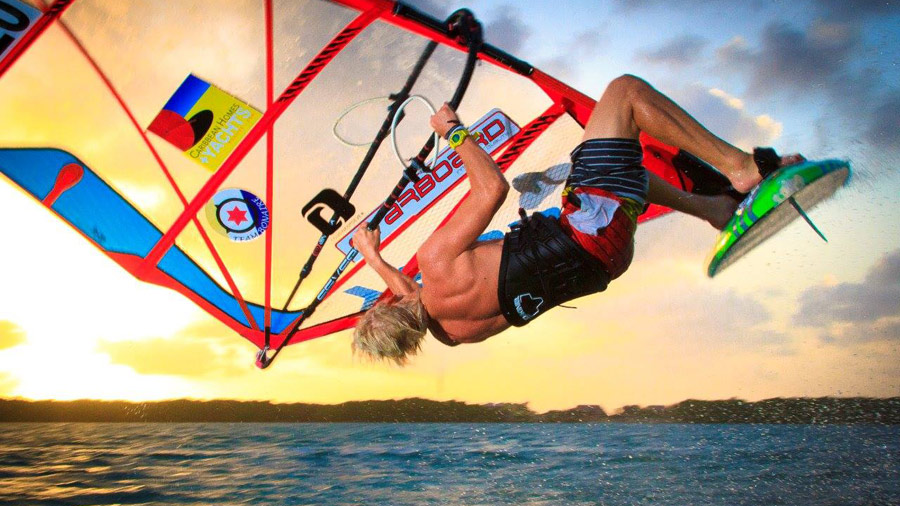 Continentseven:  Did you pick up any new moves for 2014?

Dieter van der Eyken: In Australia I was working hard on the air moves with wind from the left and got a lot more consistent,which was the main goal of the trip to Australia. But also I try to do all my normal tricks with more power going higher and improving my style on each trick to make it looking a bit more radical. Here on Bonaire I’m training the double power moves more, which somehow I can only land in the chop rather than the flat water of the mangroves and does take me longer than I would like but still got a week to go so let’s hope that makes the difference! Besides that consistency is the main thing I’m further working on.

Continentseven:  Has the level improved again in the freestyle discipline? What moves can we expect in a windy heat?

Dieter van der Eyken: The level definitely has gone up again in the freestyle discipline compared to last year. It keeps on getting better each year! And what moves we can expect depends a lot on how choppy, wavy and especially windy (gusty or steady) it will be. But on a place like Bonaire there will be a lot more double air moves landed than previous years. Fuerte will be the place where the jumps will go of the scale (double full Airflakas, maybe even going into a 3rd rotation), but also double power moves, if it doesn’t go above 30 knots.

Continentseven: What’s about you. You were really close to the podium last season?

Dieter van der Eyken: My plan and goal this year is to keep my top 5 placement which isn’t an easy job to start with but possible for sure and finally score a podium place on an event to get the taste of holding a trophy of a world cup in my hand! But I think this year conditions will make a lot of difference in most of the results, so let’s hope for hard conditions where I always sail the best in! 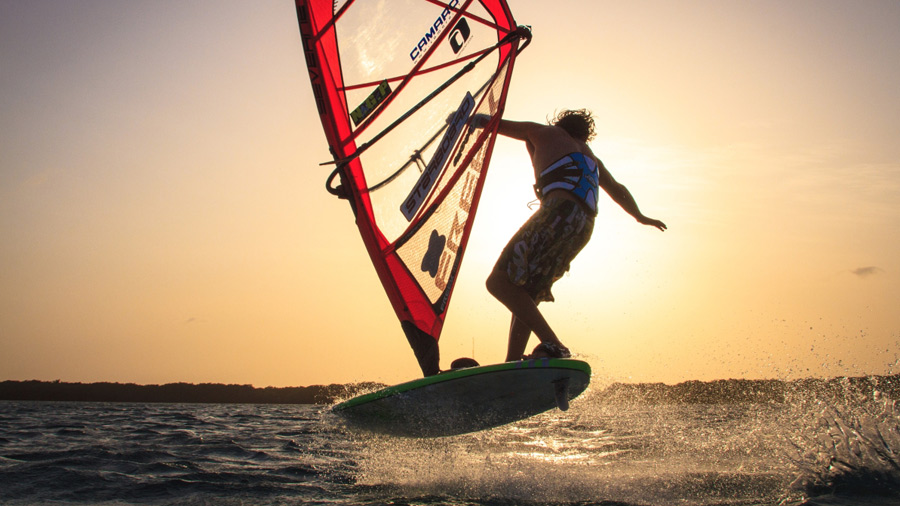 Continentseven:  In April 2013, when we met on Sardinia,  you exactly told us, who will be in the top 5 in the end of the season. What is your ranking for 2014 with Worldtour events on Bonaire, Fuerteventura, Sylt and perhaps El Yaque later in the season?

Dieter van der Eyken: Well if Bonaire happens which isn’t confirmed yet and El Yaque wouldn’t happen which means no discard it is a hard year to tell what will be the top 5.

With PWA on Bonaire:

1st Steven or Kiri
2nd Steven or Kiri
3rd Gollito (looking to the fact that last PWA on Bonaire Gollito didn’t get higher than 4th and seems to struggle a bit in lighter wind but will be the man to beat in Fuerte again.)
4th Tonky
5th Me

But if Bonaire wouldn’t happen and Fuerte is 40 knots again 5 days in a row like in 2010 in my first year on tour and Sylt is onshore hardcore conditions again.

But then the level is so close again this year. The conditions will make the difference. I didn’t put  so many guys in the top 5, who easily can get up there or not in this list for example, but I think in the top 8 we will see Davy Scheffers, Taty Frans, Tonky Frans, me, Amado Vrieswijk, Antony Ruenes,Youp Schmit, Kiri Thode, Steven van Broeckhoven and Gollito Estredo. But that are 10 guys already again, so I can’t really tell this year. But it will  be interesting again for sure! I find it actually too hard to tell this year. The level is a lot closer compared to last year.

Dieters suggestion in 2013 were: Top 3 will be the same: Gollito, Kiri, Steven (perhaps Tonky)

Continentseven:  The EFPT has a few big events on their tour calendar: Podersdorf, Lanzarote, perhaps Russia, France. Will you compete at all events?

Dieter van der Eyken: I will probably do the whole EFPT tour again as well as the PWA. Podersdorf and Lanzarote are already booked and France I will return back to as its one of my favorite destinations! And if Russia happens at the end of May I will be there as well but lets hope that get confirmed soon.

Continentseven:  What are your next plans after Bonaire?

Dieter van der Eyken: On the 8th I fly back home and will just be one day at home before I drive to Sardinia for my clinics of the Next Generation Project which are clinics for young talents between 12 and 20 years of age. I will be on Sardinia for about 10 days before I will leave to Podersdorf, where I will be till the 1st of May. After that a month home and than back to Bonaire for the month June. And after that everything is pretty much fully planned till september so will be a busy season again! 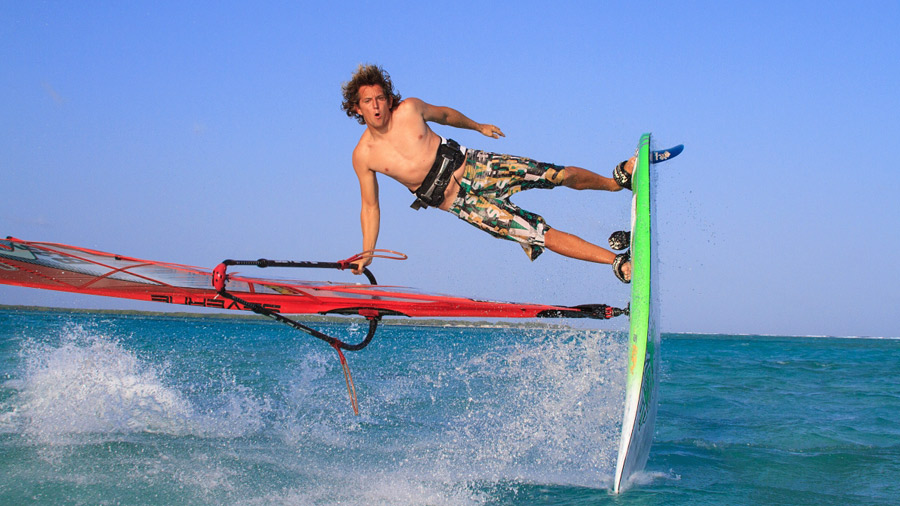 Bonaire is a freestyle paradise, even for Dieter (Pic: Markus Seidel)

Continentseven:  What are the events you are excited most for 2014?

Dieter van der Eyken: Pretty much all of them, I’m sure Podersdorf will be a great start of the season again even with just being a EFPT event instead of a PWA event I’m sure competition will be hard and level will be high! And still hoping Brouwersdam will happen again as it would be great to do a competition again at my home spot. I know the organizers are trying everything to make it happen again, but let’s hope the sponsors follow so we can have another competition at ‚home’ again.

Continentseven:  What gear sets did you use most during the winter? 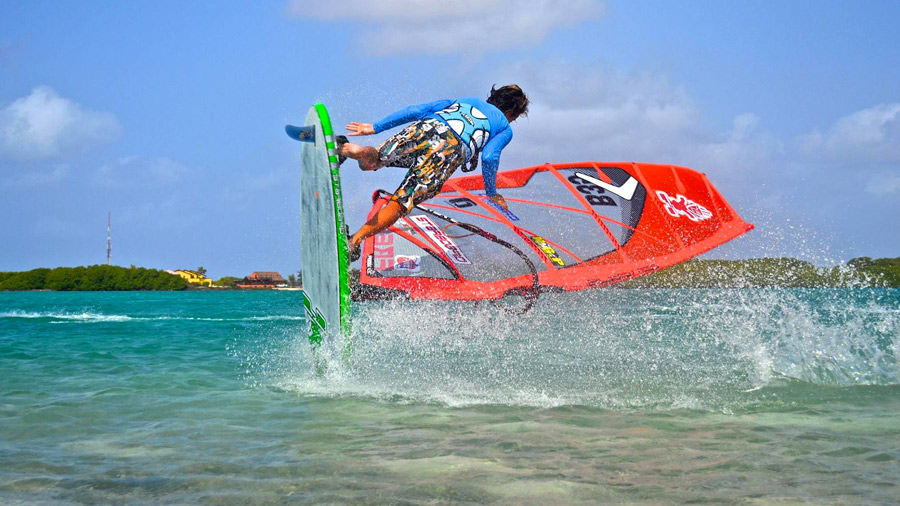 Hands off means a lot in Freestyle (Pic: Yolanda Smeets)

Continentseven:  Are you excited about the first event in Podersdorf, Austria?

Dieter van der Eyken: Yes very excited! It’s the first event of the year again like mentioned before and its a great setup with always a lot of spectators, so really looking forward to see everyone again and hopefully start the season with a good result!

Continentseven:  Any memorable moments from your trips you want to share with our readers?

Dieter van der Eyken: One of my biggest wave sailing days in light wind on the 30th of december at sunset in Geraldton. The wind was really light 15-16knts and a bit side onshore the waves where logo to almost in the biggest sets mast high and not to many people out. I stayed out till just before the wind dropped completely and definitely scored some of my biggest waves then. All ending with a great sunset with big waves rolling in over the horizon! That is a session I won’t forget fast! 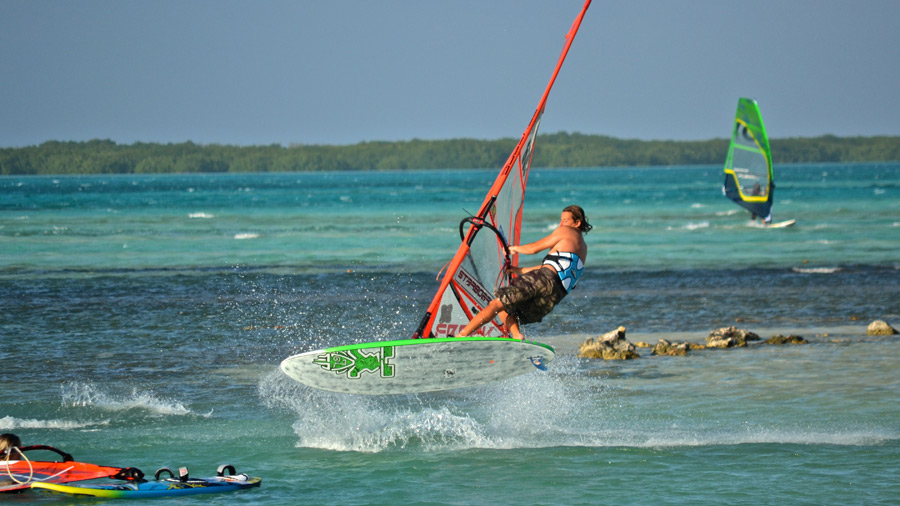 Ready for the next rotation (Pic: Markus Seidel)

Continentseven:  You sailed so much during the winter. Are you not tired of windsurfing? Did you miss anything during your trips?

Dieter van der Eyken: Yes, I windsurfed quite a lot this winter but am I tired of windsurfing? Not at all, still love sailing every day, but I do notice that sailing in different conditions keeps me even more motivated than sailing at the same spot for 2 months. But still then I sail everyday it’s windy and enjoy it always! The only thing I miss during my trips is… A good Belgium beer maybe? Doing what I love so then you don’t miss really anything!

Thanks so much for the interview, the season preview and we wish good luck for the 2014 season.