Gran Canaria local Dario Ojeda is back on track and fully motivated for the 2016 competition season. It seems his new equipment partners gave him an additional boost of motivation to fight for podiums again. We had a chat with the Canarian waterman, who is looking forward to the first wave event of the season at his home spot Pozo Izquierdo. 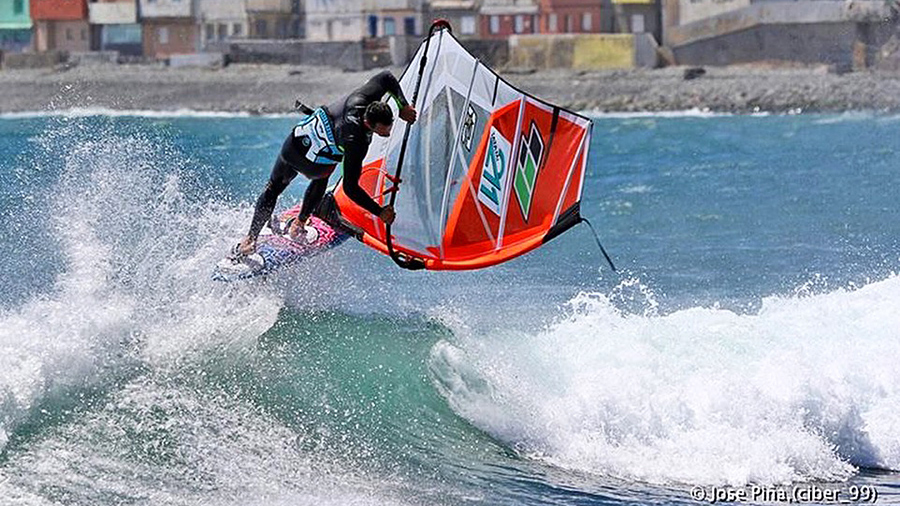 Continentseven: Dario you got a new sponsor deal for 2016? Tell us a bit more about it.
Dario Ojeda: Yes, I’m really happy that I got sponsored by 99Novenove boards and Challenger sails. For me it’s the perfect combination of not only equipment but also two brands, who are pushing the sport with some new projects and the best team riders. They were looking for a rider with my qualities here in Spain I guess. I feel very comfortable plus they give me the chance to try new boards and prototypes.

Continentseven: Shouldn’t you ride on Goya stuff with your sail number?
Dario Ojeda: Hahaha well this number E-211… I chose it when I was 14 years-old and started to compete, so I needed a sail number to sign up with the Spanish sailing federation. I wanted to have E-11 because at that time this was the champions number (Dunkerbeck had 11 and Naish had  11111). I choose GC-11 but I was told that I can’t compete in the World Cup with GC and that I have to have a proper Spanish number starting with E.  As it was not possible to get E-11, chose to be E-211 (2 “second” and 11 or the next E-11, kids things hahahah) so that’s the story and I don’t know if Francisco Goya was on the scene yet.

Continentseven: A few weeks ago Kauli Seadi visited Gran Canaria during his Euro-tour.
Dario Ojeda: Yes, we are close friends and were traveling and competing in the past together. I have been knowing Kauli for more than 20 years now and he is a really good friend. He always stayed at my house when he came to train for the event in Pozo and we used to travel around together. He is really positive, humble and an active person, who wants to train all the time. He has the same attitude I have and I have been telling him to come to Gran Canaria during the winter to check how good it can be. Gran Canaria has glassy surf in winter and perfect waves for surfing, SUP or windsurfing, not the typical Pozo 3.3m summer overpower. So finally he came with Nana, his wife and Joao Henrique Janjao, stayed in my house and they enjoyed the incredible waves at Mosca Point together with the Moreno twins, Pablo Ramirez Bolanos and the whole Pozo crew. Additionally we visited the beautiful places on the island and guess how surprised they were seeing the north of the island: mountains, landscapes and the great surf.

Continentseven: The last three years you were a bit off the competition scene. Did you find new energy to give it all at the age of 36?
Dario Ojeda: We had very bad luck with 2 years of no wind in Pozo Izquierdo during the event period and last year I suffered a bad injury. I stopped the first heat of the competition, had no sponsors and also I was dedicating much time on my business to make it work, but now that business is running well and I got new sponsors. I’m full of energy and motivation again.

Continentseven: You are also doing Jiu Jitsu comeptitions. You must be incredibly fit?
Dario Ojeda: I worked really hard and trained even harder but it was all worth it. Yes, I also started to compete in Brazilian Jiu Jitsu, what went really well so far. I have won all the events in the nationals and as well some international events. I am really proud to be an example for others. No age or status can tell you that your goals are impossible when you work hard to get them. The name of the  academy is Tatami 211. It’s a fusion of my 2 passions, my favourite sports: martial arts, what you can practice in the Tatami and my sail number 211, which I use in windsurfing competitions. At the Tatami 211 you can practice any martial arts and I am also adding water sports classes for the kids, who want to become professional windsurfers. I can train them to become a champion with my more than 25 years of experience.

Continentseven: What’s your motivation? You had awesome results from 2010 to 2012 with two podiums in Pozo.
Dario Ojeda: Life is a challenge and in life you have to have goals and I don’t know what my motivation is, but I still wake up at 6:00 am when I know there are good waves even if it is cold, rainy or I’m tired from training after more than 24 years now. My motivation is to do the things I like 100%. The key is: do what you love, love what you do. Of course it motivates having sponsors and if they look after you to have the tools you need to do good. If you have the right things under your feet and in your hands everything is way easier. 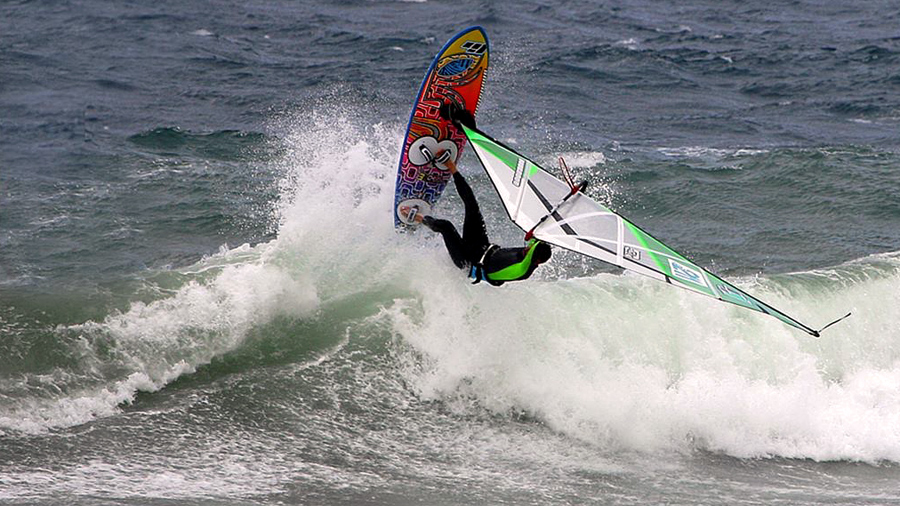 Continentseven: You think you can make it on the podium again?
Dario Ojeda: Yes and I will give everything like I’ve always done. I hope to be back to the podium again this year. I have competition in my blood. I have fun competing, but it’s also a way to show and proof your skills. In all I do, whether it’s windsurfing or in Jiu Jitsu I feel free, my mind stops thinking and I have fun. This is freedom.

Continentseven: 14 months ago you said in an interview, you have nothing to prove anymore.
Dario Ojeda: I meant in the competition. We all know windsurfing competitions, we have 8 to 15 minutes to show 3 best jumps and 2 best wave rides and most of the time the conditions are not good and we are forced to go in the water anyway. So it doesn’t mean that, if you are not winning PWA events, you are not a good top level windsurfer. A good example is Levi Siver or Kauli Seadi or Kai Lenny who decided to not follow the PWA anymore full time. For sure I prefer to be a free surfer, but I also like to compete, but in good waves and good conditions. 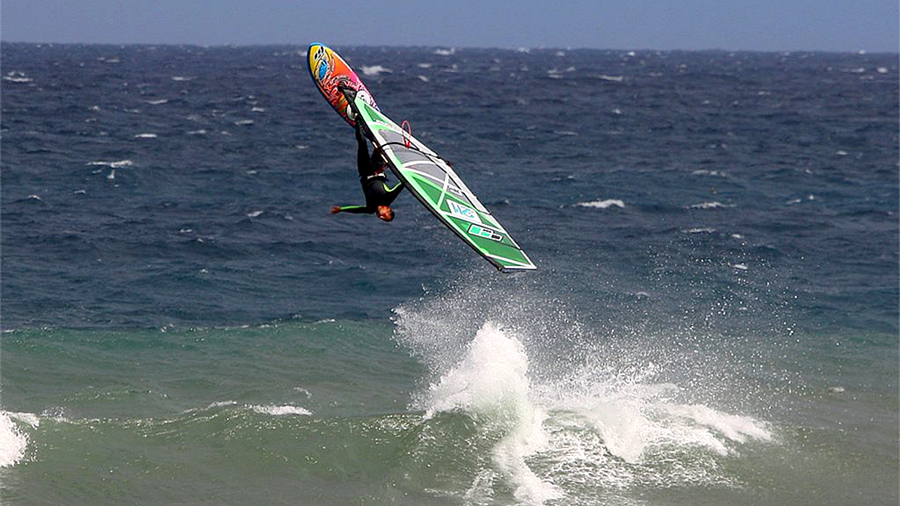 Dario with a Back Loop (Pic: Jose Pina)

Continentseven: The Gran Canaria Wind and Waves event is around the corner. Looking forward to the event?
Dario Ojeda: Yes of course. It’s one of the most important events and will be from the July 2-10. Thanks to the Moreno Twins, who are trying their best to make it happen every year.

Continentseven: What’s your favourite place in the Canaries?
Dario Ojeda: The Canary Islands offer really great and all kinds of waves all around the islands and every place has its magic and energy!!

A great sailor and a great guy! A true Pozo living legend. I will always remember his heat in the double at the 2012 Pozo PWA vs. Robby Swift..