Balz Müller and Yental Caers shared a windsurfing session at Big Bay, South Africa on February 28. Yentel was on a brand new 2015 sail, Balz on a 30 year old 3.6m wave sail. Both sails have 4 battens. Fabio Calo from 4Windsurf filmed the session and released a little clip. See the results!

Looks like we should dig out some old sails. It was for sure very difficult for Balz to choose the right mast with the correct curve 🙂 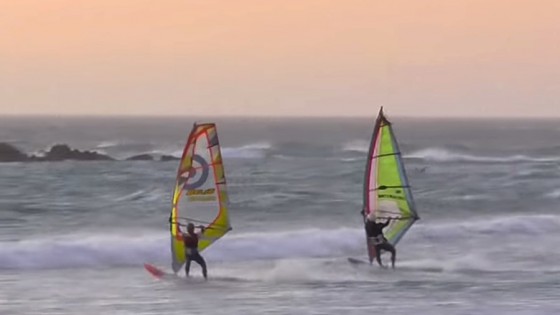 So he will loose his sail sponsor now? They must be very happy about that video, haha

This is the first real Swifty crash!!

Its not the same using this sail with an old mast and boom, than using it like he did.
I want to see him with an old fiber mast and a wooden boom.

In NL many guys use stuff out of the 80s.