The AWT/PWA Aloha Classic 2013 was a very long event with a lot of great action and winners in so many classes: PWA men, AWT pro, AWT women, AWT amateurs, AWT masters, AWT Youth and all the overall titles of PWA and AWT. The AWT released a clip with action from the ladies, youth, amateurs and masters. Watch the video and get some infos about selected groups below. Congratulations to all winners and we hope you can understand, that we are not able to list or mention everyone.

The final pitted the local talent Harley Stone, son of former Freestyle PWA World champion Josh Stone, Casey Rehrer, Tom Juban from Guadeloupe and Fiona Wylde from Oregon. The youngest rider in the AWT Pro fleet, Harley had impressed the judges with his critical turns and immediately set about finding set waves and staying tight in the pocket to rack up points. Tom Juban a great surfer and younger brother of 2 times AWT Champion Camille normally is at home in the Ho’okipa surf, but struggled to find the best waves. Fiona is a Tour sensation, who competes in more divisions than any other riders. She splits her time between the Gorge, Mexico and Maui and has been pushing hard all year. Narrowly missing out on the Women’s final and making an earlier exit than expected in the Amateur division she was motivated for this heat. Known for her fearless riding and powerful turns her presence in the final must have made the others nervous. Despite smaller waves than she would like, her powerful cutbacks were enough to claim the final spot on the podium and the overall 2013 AWT Youth title.

Casey has been surfing more and more recently and this is showing in his riding. In the light winds he was able to generate and maintain speed, which the others couldn’t. This translated into super late, fast and snappy turns. Opening up at the end of his waves he increased his scores with perfectly timed and executed aerials with one nonchalant head dip aerial to seal the Aloha Classic Youth title for 2013. The sixteen year old also demonstrated his aerial prowess as he planed out of a forward loop, even though no jumps were to count. Harley Stone finished just behind him in second place after showing excellent wave selection and execution as he connected several fluid linking turns. As the only female in the final, Wylde, showed she’s a force to be reckoned with as she combined big, powerful hits with a nicely controlled aerial to claim third place. It will be interesting to see Casey and Harley competing on the Pro Tour next year and perhaps they will shock a few riders. With this level of talent on display it is clear that the future is bright if the y keep on pushing hard. Let’s hope that many more young kids will start windsurfing with the goal to ride waves or nail cool tricks on flat water. This time 12 youth sailors were competing at the AWT Aloha Classic event. The youngest competitor was Wiley Daniel at the age of 8 years sailing on a 2,6 m sail and he finished in 5th place!

We as well would like to mention that a few top pros organized a “Youth Day”. Pro riders Kevin Pritchard, Levi Siver  and 2013 AWT Aloha Classic winner Bernd Roediger held a 9am clinic for the Youth riders at Ho’okipa. They shared their experience with the upcoming champions and tried to inspire the next generation. 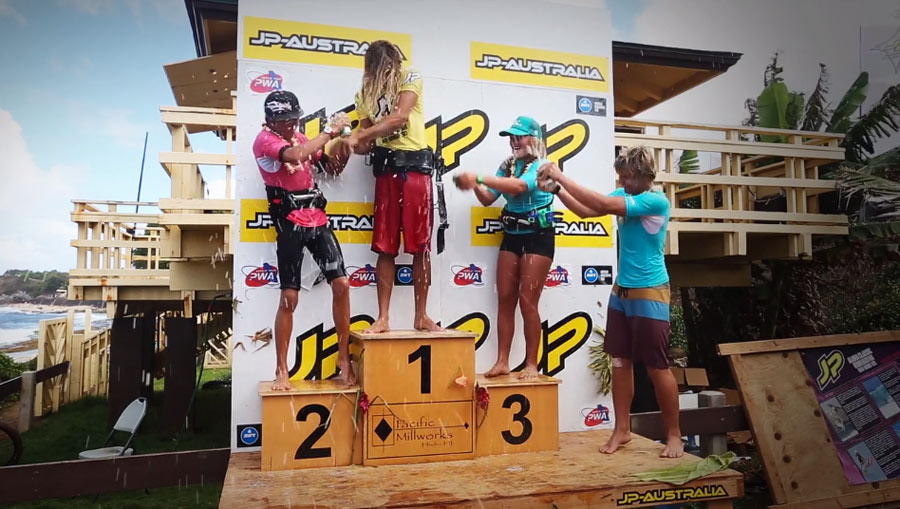 The Youth winners with Casey Rehrer on top 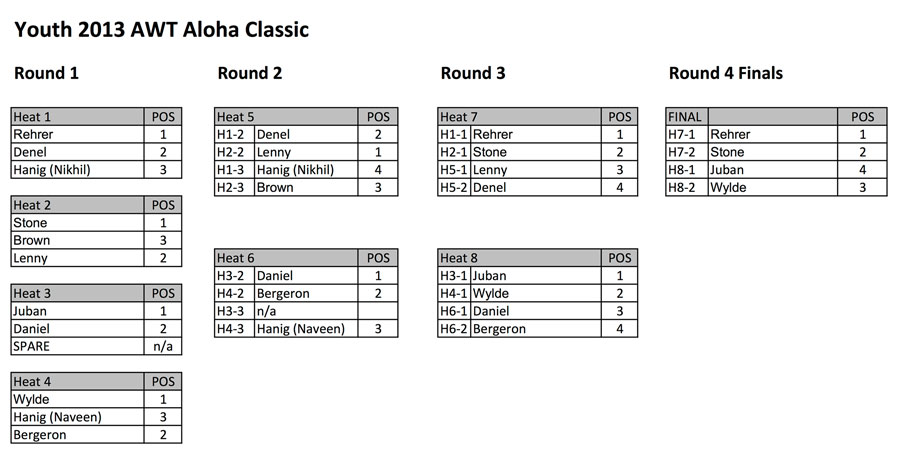 The finalists Tiffany Ward, Tatiana Howard, Ingrid Larouche  and Junko Nagoshi had all previously fought hard, risking all to make the final four. With solid sets rolling through Ho’okipa Beach Park all riders would demonstrate during the 16 minute heat what they had in their arsenal in an attempt to wow the judges and on looking crowd. These heats were streamed live in between the men’s heat.

Reining event champion Junko Nagoshi, former PWA rideris always at home in the Ho’okipa surf, the Goya rider is known to push hard on big days, fearlessly going deep and hitting thick lips. This contest has been no different and the girls know that they have to sail smart but also be aggressive if they are to knock her off the top spot.

Ingrid already crowned AWT Tour Champion had nothing to lose and everything to gain. Her in the pocket riding was pushing Junko all the way. When Junko waited outside and found the wave of the heat she was offered the perfect canvas and drove hard off the bottom setting up a huge cutback right in the critical section of the mast high wave, as the wall opened up she painted beautiful lines racking up a huge score, at the same time dashing the hopes of her fellow competitors who could only watch. With the race now for the remaining trophies Ingrid continued to drive her rail and Tatiana and Tiffany looked for the better waves.

Wave selection was critical out there, with some of the sets opening up and some shutting the rider down early. You could see the pure stoke as riders traded waves with Tiffany taking set waves and carving hard. It was the vertical turns of Ingrid and fluid style of Tatiana that would eventually result in them claiming 2nd and 3rd behind the dominant Junko.

Junko Nagoshi, AWT 2013 Aloha Classic winner: “I had really good time at the final. It was very special! The condition was great and I was just happy to sail 18 minutes at Hookipa with all the finalist girls Ingrid , Tiffany and Tatiana!! This year especially I was very impressed by some of the girls like Ingrid and Fiona, who improved a lot from last season. And Tatiana and Tiffany are 2 of my favorite sailors to watch here at Hookipa. I think all the girls had fun too.
I just want to thank to Sam for making Ho’okipa event happen this year again. Also I always appreciate all the support from my sponsors Goya windsurfing, Da Kine and Carvy wetsuits who provide me best products in the world!!! A last big thanks to 2 of my bosses at work Keith Holland and Michel McCoy who gave me time off for this event!”

Have a look on both full brackets of the masters/grand masters and amateurs: 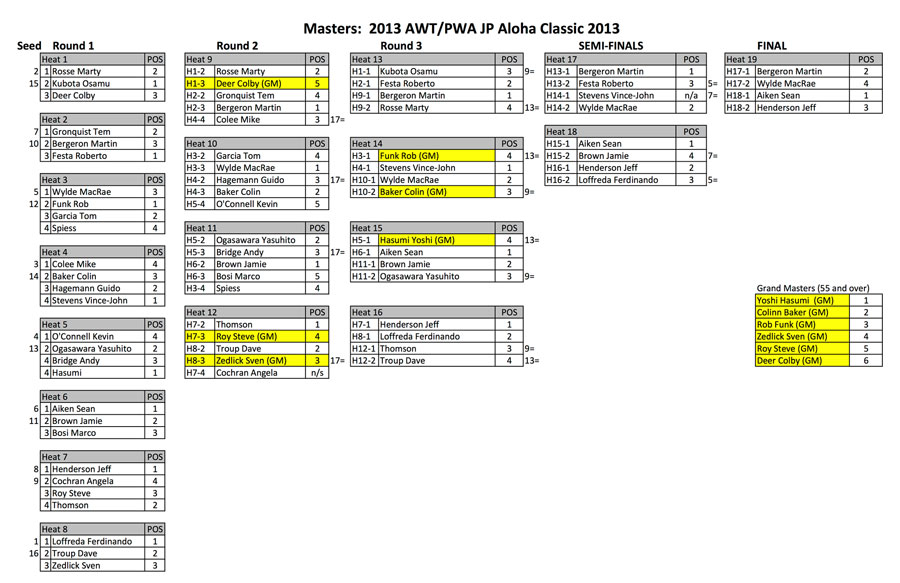