Adam Sims about the trip across Norway – Interview

Adam Sims has just released his latest video called “As Far As We Can“. He, his windsurfing friend Riccardo Marca and Adam’s girlfriend Alina Shalin travelled in Adam’s van across Norway in search of wind of waves. We like the project and wanted to know more about their trip through Norway. 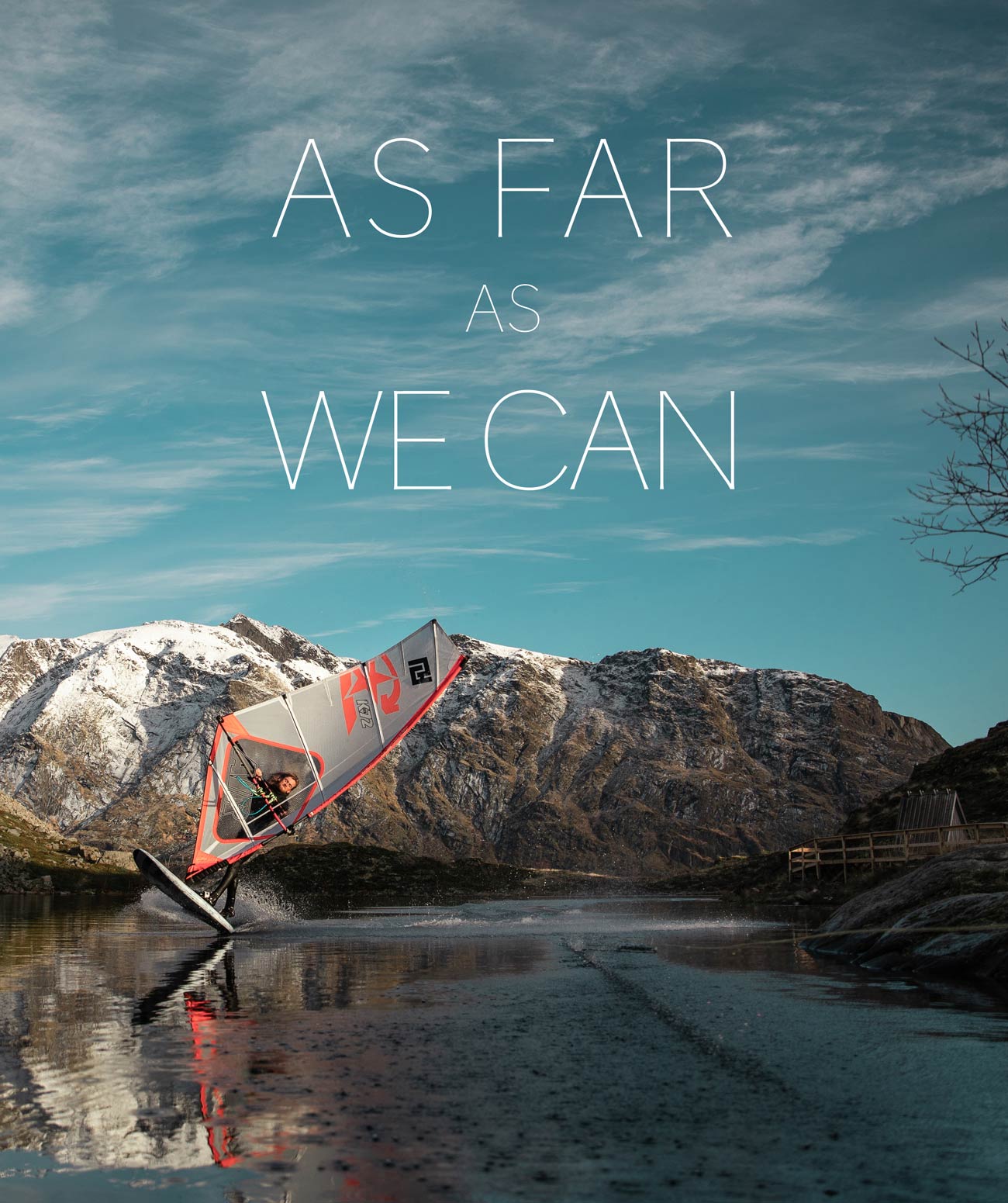 As Far As We Can – Cover

Continentseven: How long were you in Norway and how many kilometers did you drive?

Adam Sims: The trip was over three weeks in the end. We left straight from the last event of the year in Holland, then stopped in Hamburg to drop off Riki’s van and cruise on up. Total kilometers was a lot! Ha. I remember Riki clearly saying something like 3000kms to get home from where we were, so I guess around 6000kms…

Please describe your tour a bit.

Well we started in Holland, stopped in Hamburg, took my van to north Denmark and the ferry into Oslo. Then we drove up to Trondheim and from there we let my followers vote where we go by using my Instagram story, haha, so we ended up in Gladstad after 7-8 ferries, this spot was sick! From there we went up to Bodo, another 6-7 ferries, and finally another ferry across to Lofoten. We then stayed around Lofoten for two weeks, our first chance to stay a few nights out the van, and just really explore the area a lot. Still wasn’t enough time! Then all the way back to the UK through mainland Norway. Riki split off in Hamburg and had an extra day back to Italy. 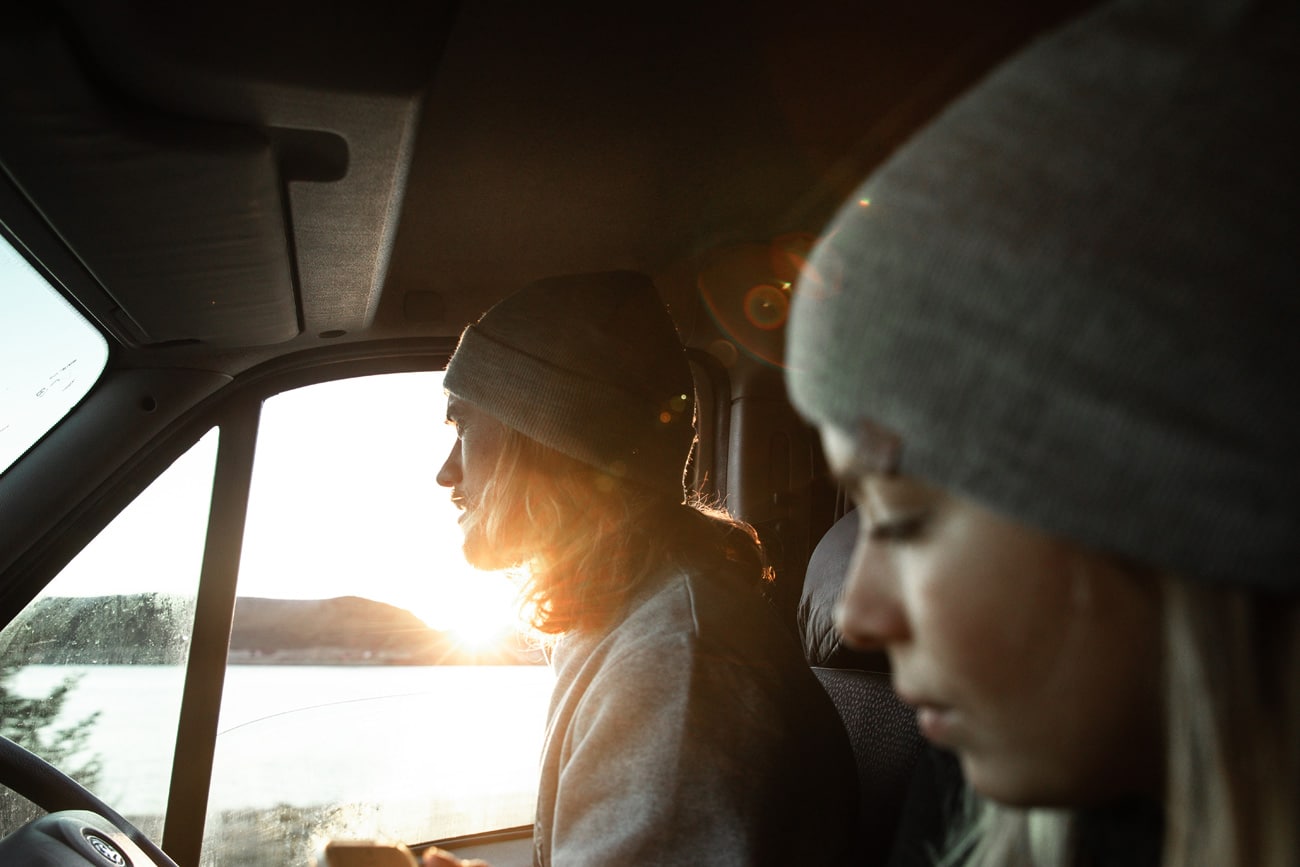 Adam & Alina inside the van

Did you meet any other surfers or windsurfers?

Not a single windsurfer or kitesurfer on the way, we got a few messages from guys who live in Norway asking us to stop by enroute, but after checking locations it was pretty far out to get there, so we decided to stick to plans and keep going. In Lofoten we stumbled across a bigger surf scene than I had experienced before, about 20-30 surfers.

What was the main motivation for you and Riki to travel to Norway?

Well I wanted to go back there ever since the last time I had been there. I was keen to capture the place in my own way as well as discover new locations. Riki approached me with some budget to kick things off and an open end to let my creativity take over, so I suggested to head North… 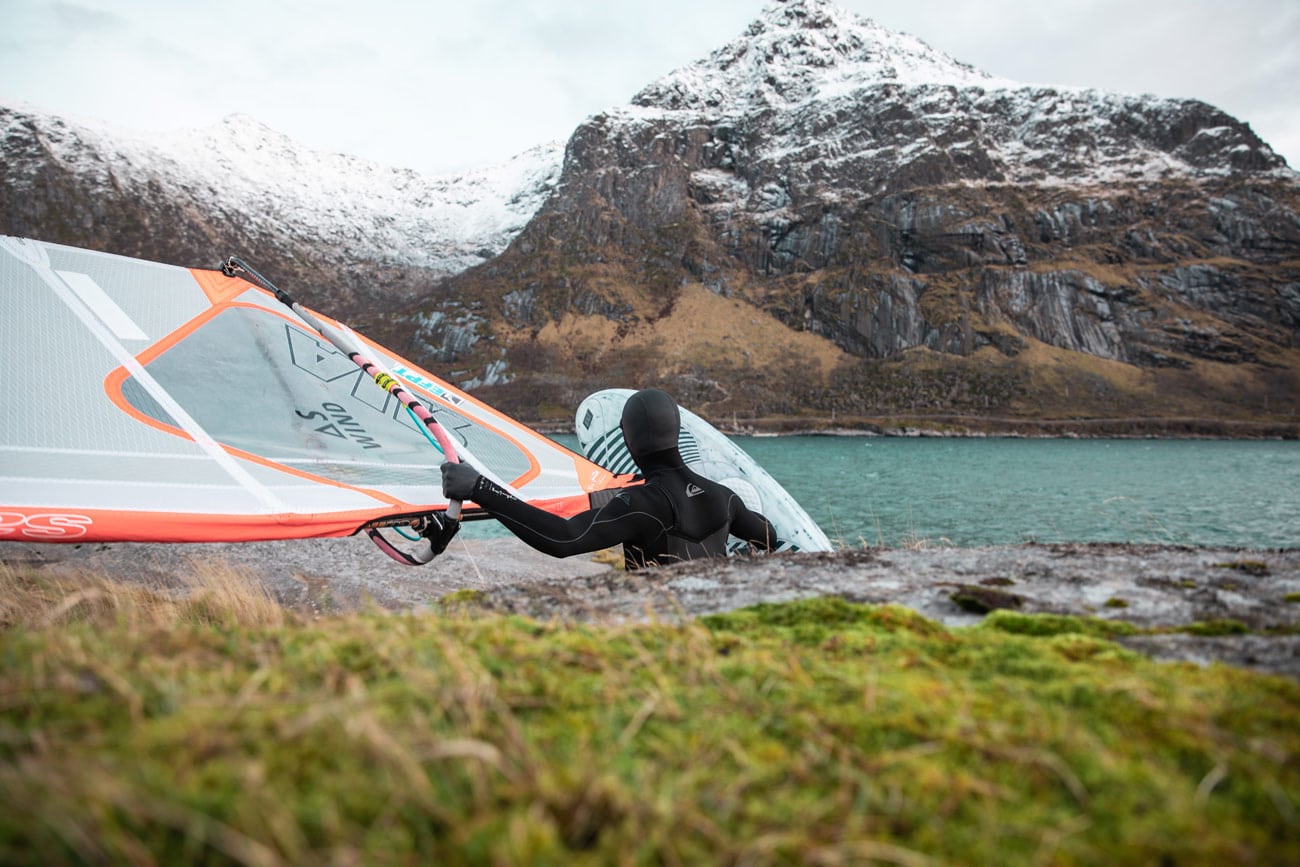 Adam Sims at a remote spot in Norway

It looks freezing cold. How extreme was it?

Well it was definitely cold, the wind made it even worse of course but that’s what we were there for. Just we had our back-up winch, although a very slow one (that’s another story in itself, but thanks to Rick Jendrusch for saving us there). But yeah, so long as you had some decent thick rubber, we’d just been hooked up with Quiksilver and Roxy (I tried to convince Riki to go for a Roxy suit but after some thought he stuck with his), these suits were perfect, in fact we were physically steaming after most sessions, but maybe that was just us? ha!

Is Norway worth a windsurfing trip?

Absolutely, and I would totally recommend the exact same route we did, take the coastal road, it’s a lot of ferries but most of them go within an hour or two of you arriving at the port. But plan ahead, we missed one ferry by 30 mins and faced 2 and half days stuck on a remote island, fortunately we managed to back track (it cost us 3 ferries in the end) and make our way around. The scenery itself is like nowhere else I’ve ever been. I would say the more different sports/disciplines you can do, the more potential you can unlock from this kind of place. I would only advise core wave sailors against possibly going all that way, but then most wave sailors can surf, and the surf up there is really awesome, plus it’s warmer in the water than out. I should work for visitnorway. 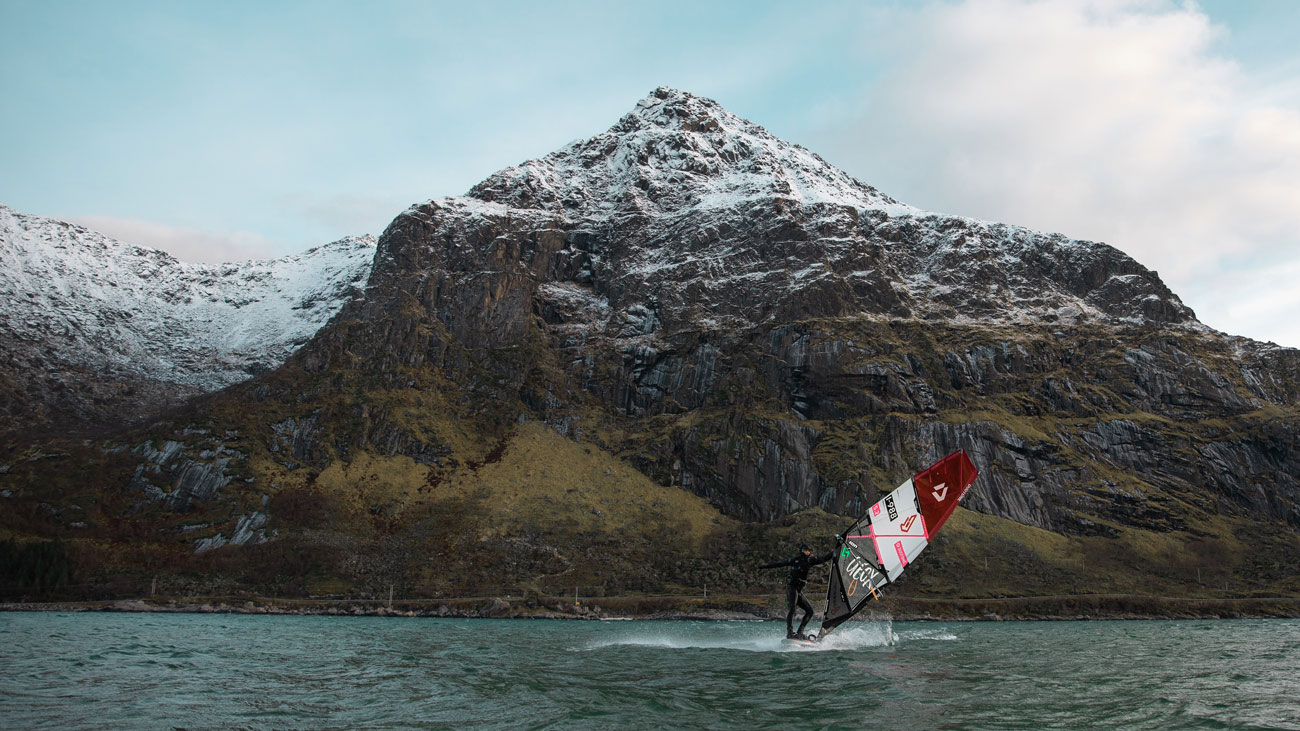 How difficult was it to film, photograph and windsurf?

Haha, I’ve had good training the last couple of years on the EFPT tour. Just the main difference was the super cold days, it was colder to film and take photos than actually be on/in the water. Which helped keep us motivated to get in those mildly-moist wetsuits. That reminds me, it was so cold one day that the sea water froze on our sails whilst we changed before packing them up. In the end we had an awesome crew, all of us motivated to grab the camera and film and shoot, we’d discussed a lot that somedays would really be hard, driving sideways hail in wet clothes, but we were ready for it. Most of the time it was just one person on the water and then the other two would shoot and film. My parents also joined for a part of the trip and would occasionally be placed behind a carefully positioned camera with a set focus, haha, actually my Dad got some really nice photos which will probably make one or two mags, but don’t tell him I said that. And in the last days we had Red Bull photographer Jaanus Ree join us, so we could focus a lot more on filming. It was a good team but the weather and daylight hours was truly against us.

What were the main difficulties?

Well yeah the weather and daylight hours were truly the hardest part. We’d been prepared for 7 hours of daylight, in actual fact by the last days it was more like 2 hours of workable daylight. The sun stays low over the horizon all day, you combine that with the kind of topography up there and you don’t see it much. And then when it’s good wind it’s almost always cloudy. Lucky for us, we had the winch, surfboards and SUPs.

What camera gear did you use?
We used the Panasonic LUMIX GH5, I’m extremely familiar with this camera so it made the most sense. I squeezed the highest quality I could out of it whilst keeping the high frame rates. We filmed all together almost exactly 1TB, at least that’s what I have on my hard drive, I did organise some of the footage up there so perhaps it’s was a bit more than this.
For photos we had a Canon 5D MarkVI borrowed of Alex Mertens (thanks so much for that) and then towards the end of the trip Jaanus Ree joined us to shoot, he’s on Nikon and it was a pleasure having him there, we have some amazing shots you can expect to see in print soon. 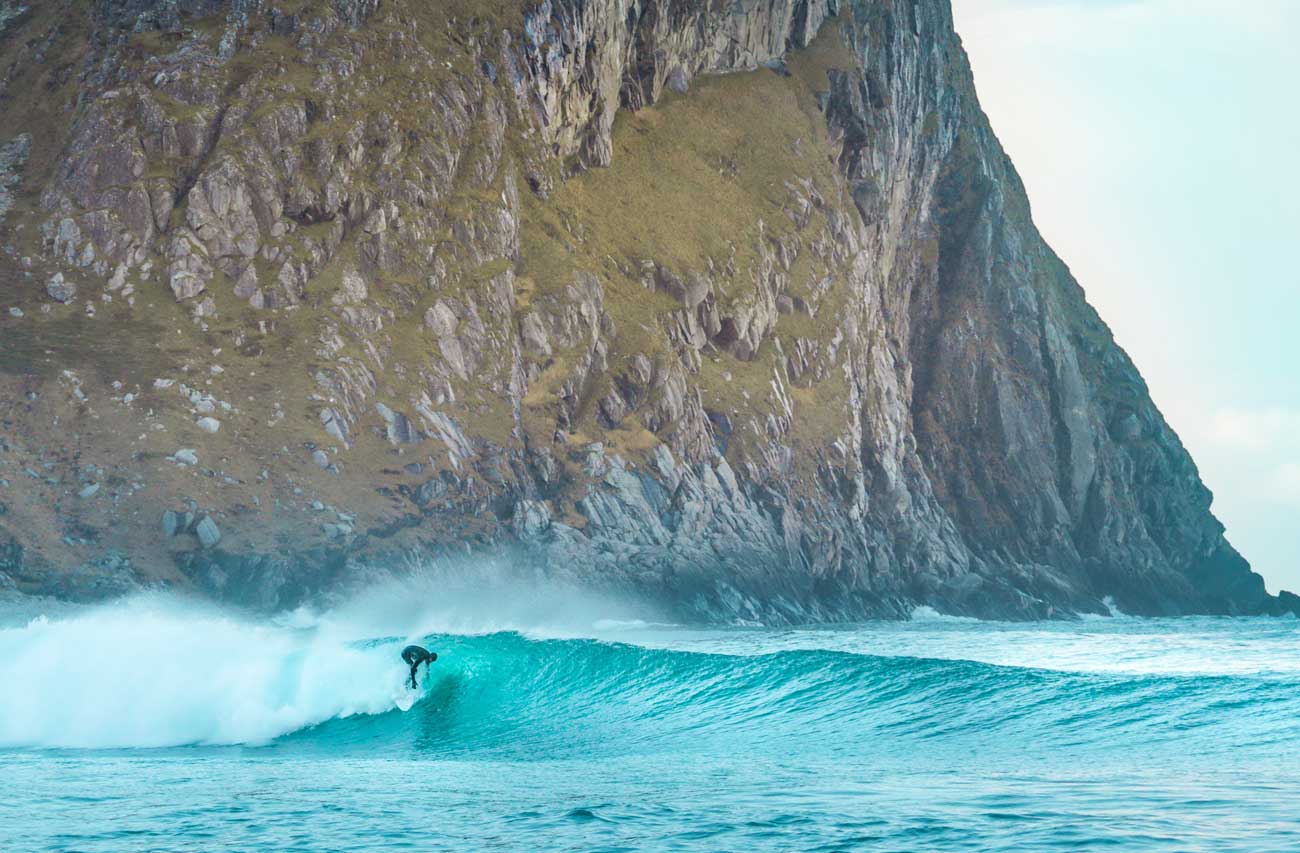 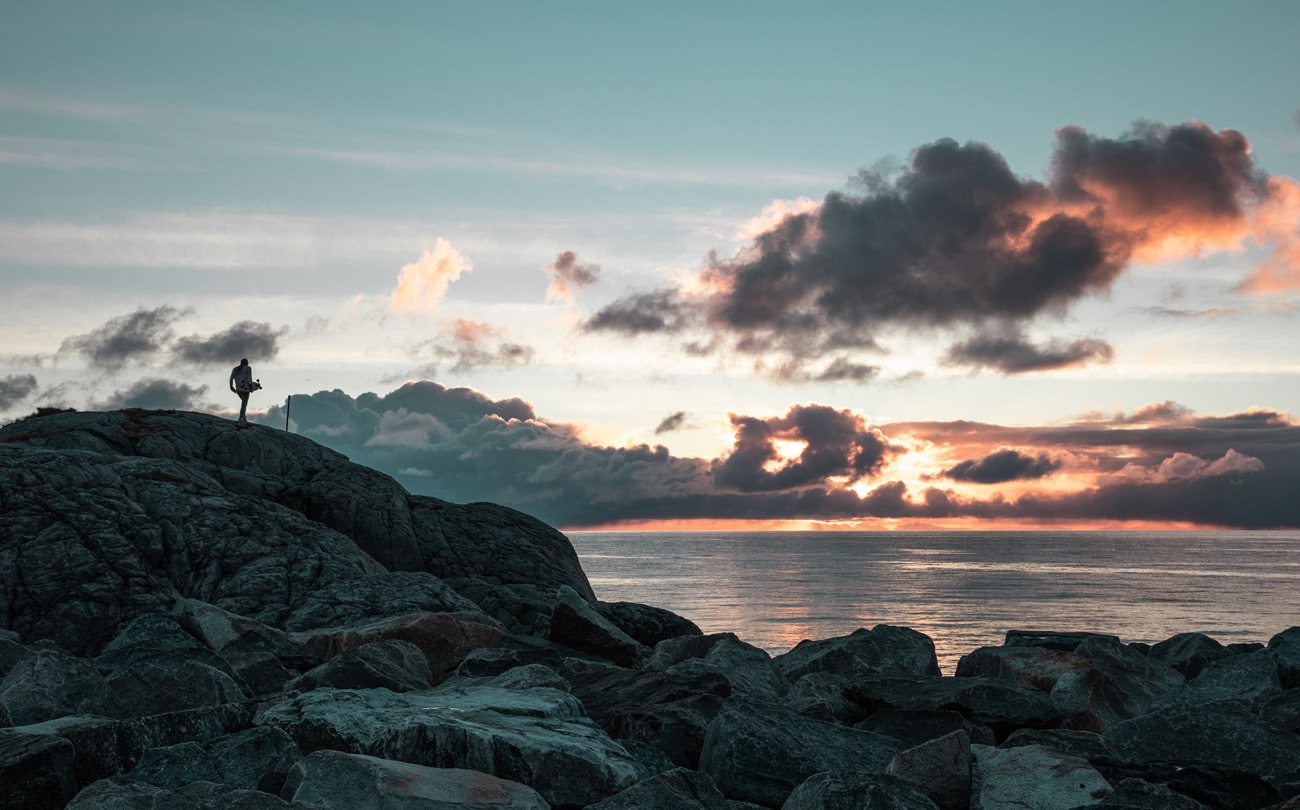 Low sun far in the north of Norway in October

Will you continue producing Vlogs in the future?

Yeah that’s a good question, it’s truly been a matter of time. I really enjoy doing them but it’s fairly time consuming, makes me totally amazed at these guys who produce them daily! I will for sure produce more of them, I decided to make it easier on myself and step back on the camera gear a bit and actually go more raw behind the scenes style. It was part of the reason why I stopped as well, I enjoyed making them but felt it wasn’t entirely my style. I brought my ways back into a bit with the ‘behind-the-scenes’ edits we produced for As Far As We Can, they were a lot of fun.

How many hours did it take to edit the final movie?

I guess if I add up just the raw movie editing hours it was near 100 hours straight. It sounds a lot (or maybe it doesn’t), kind of is I guess but I feel like it wasn’t enough. I didn’t give any parts to anyone to help, I would have liked to have spend more time on the colours. In the end this project was for me to prove to myself that I can produce something a little more cinematic, less fancy transitions, mix-up the music genres a little and not just raw windsurf action (don’t get me wrong, I love raw windsurf action). My next big movie, which is massively behind schedule, is to test the documentary style. I’m trying things out here you know. 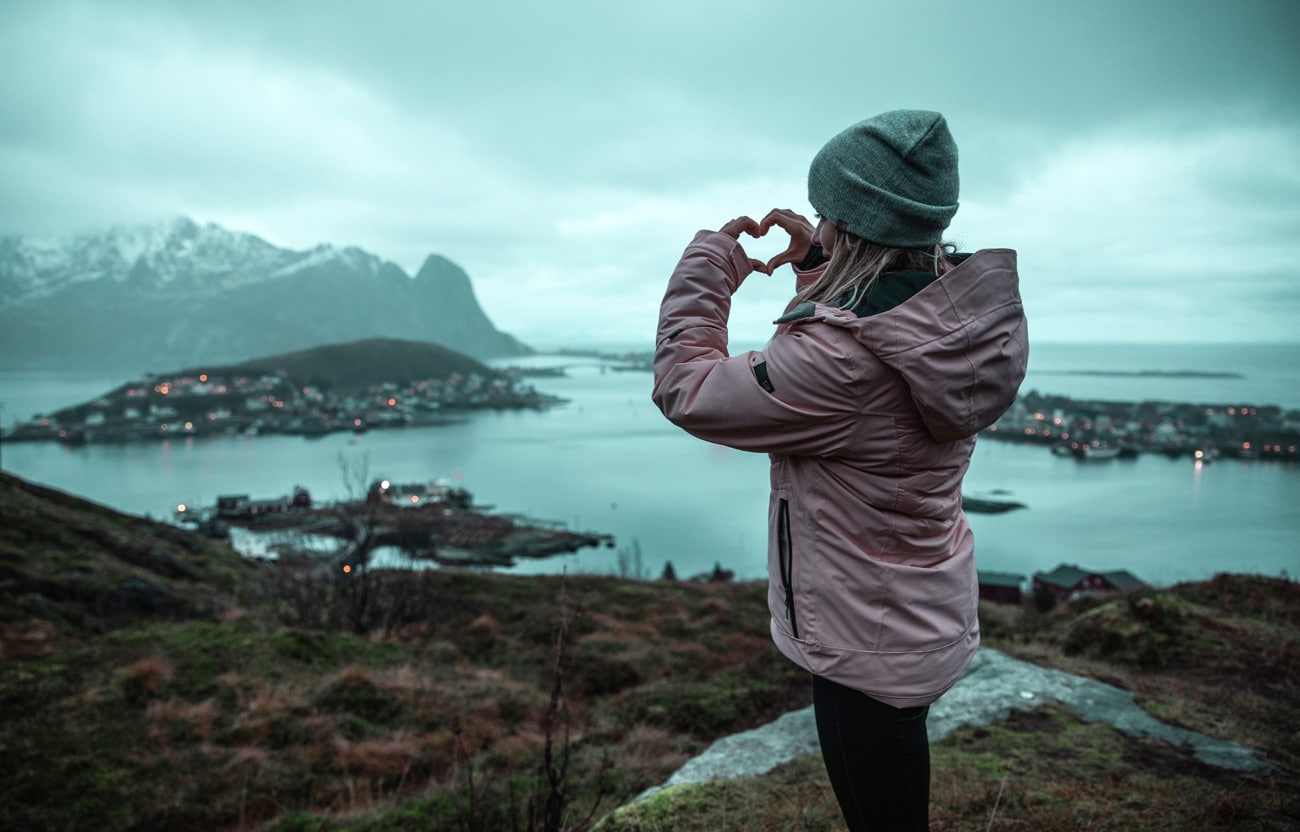 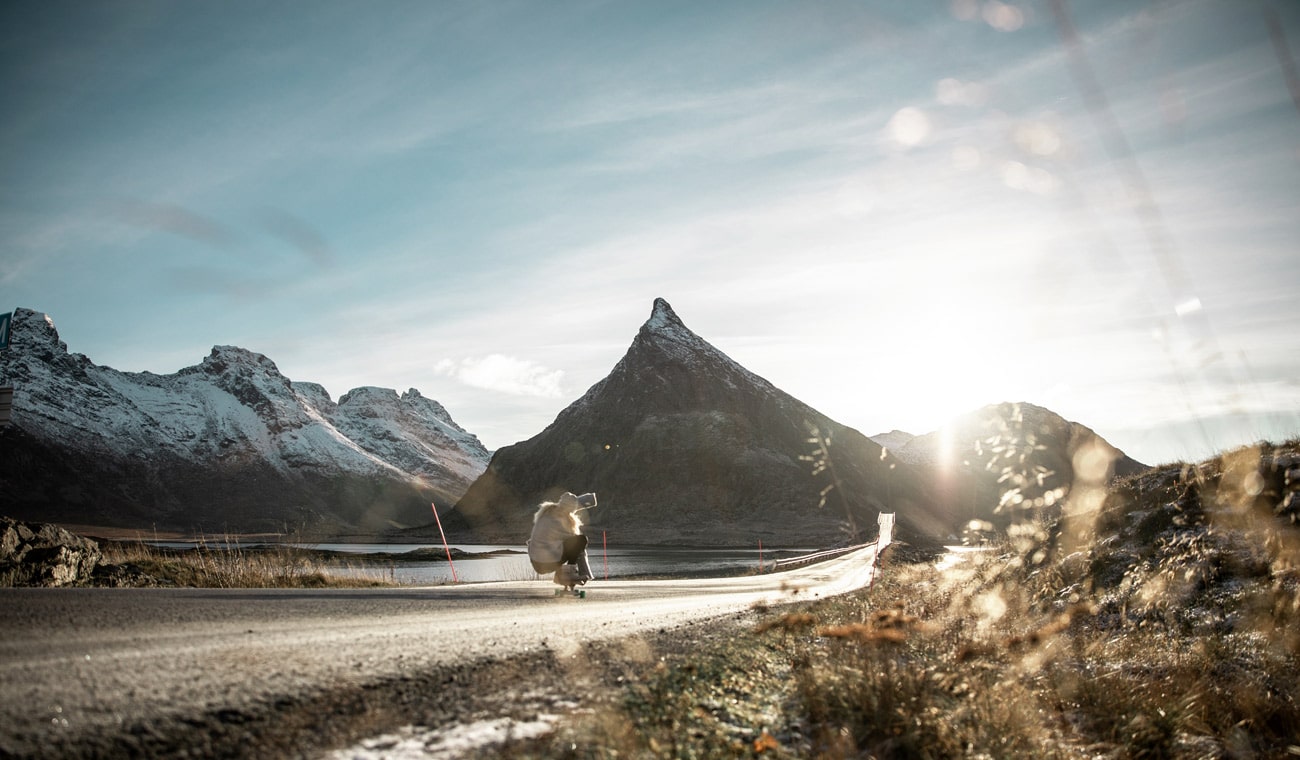 Alina rides her skateboard at the arctic circle.

Interesting interview, and solid work. My only complaint is that, like in most WS videos, the action shots are basically extended pictures, with slow-motion images of parts of the moves.