The following clip is 27 years-old, but it makes fun watching it. It shows the premier event of 1985 sponsored by O’Neill Wetsuits. Jack Oneill showed up at the pricegiving with his legendary eyepatch and handed over the awards. The most outstanding sailors these days were Robby Naish (US-1111), Alex Aguera (US-151), Peter Cabrinha, Mike Waltze. Randy Naish, Matt Schweitzer, Mark Angulo and Ken Winner.  Outstanding women sailors were Jill Boyer, Kelby Anno, Jenna de Rosnay and Debbie Brown.

The backward loop was just born and most of the sailors still overrotated this move, which was called 360° Aerial Helicopter by the commentator or was known as Barrel Roll as well. Watch out for Robby Naish, who landed his first Backloop in a competition and as well went for a radical double attempt. He was able to defeat 16 year old rising star Mark “Baby Gu” Angulo, but lost in the final against local Alex Aguera, who had a breathtaking waveriding style and a lot of knowledge at Ho’okipa. He still would score big nowadays.

Back in these days most of the sailors were using asymmetrical boards with a single fin or thruster fin setup. The wavesails looked very different in between all brands. Overall it´s impressive how great the sailors performed in the waves of Ho’okipa back in 1985. 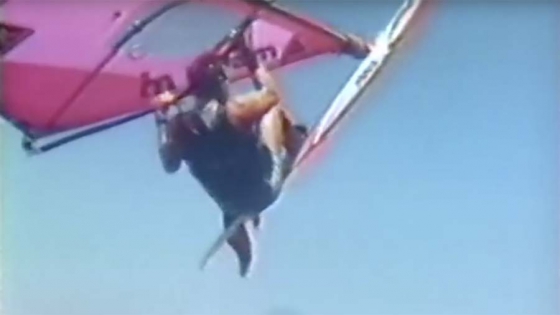 The event movie got produced by “A Water Cooled films production”, filmed by IW. Harper & Dan Merkel and released on VHS.

chris2018-05-22T08:13:05+02:00December 9th, 2012|
Subscribe
0 Comments
Inline Feedbacks
View all comments
This website is using Google Analytics. Please click here if you want to opt-out. Click here to opt-out.
0
0
Would love your thoughts, please comment.x
()
x
| Reply
We use cookies to ensure that we give you the best experience on our website. If you continue to use this site we will assume that you are happy with it.OkNoRead more