The 2013 Lüderitz Speed Challenge has been running since October 7th. The biggest speed competition of the season has many participants, which all seem to be prepared well. The measured times are much closer and many more sailors will be able to get close to the 50 knots barrier in the near future. The channel got changed compared to 2012 but the wind is lacking a bit.

SO FAR, WHO HAS BEEN THE FASTESTS?

Swedish top speed sailor Anders Bringdal (S-10), currently second fastest man on planet with 51.45 knots on 500 m, sailed faster than 50 knots in just around 30 to 35 knots of wind. He managed to sail the 500 meters with 50.43 knots average speed, which is much faster than the existing wind blew. Antoine Albeau, the current World Record holder on the 500m with 52.05 knots on 500 meters, managed to sail 50.07 a few days earlier. Antoine is the 7th fastest person in the speed world ranking. The Sail Rocket leads by far followed by 5 kite surfers. Anders is 9th. So far they are the fastest guys at Lüderitz, Namibia. A bit further down this article there are results posted from the runs of November 1st.

Hans Kreisel and Patrick Diethelm had fantastic speed in several runs, too and were the fastest speed sailors on day 8 with 49.21 and 49.11 knots. Will be interesting to see, how the results will look like, when the wind picks up to 40 knots+. Probably the most experienced and fastest windsurfers in the world will fight for a new world record: Antoine Albeau, Anders Bringdal, Björn Dunkerbeck, Jurjen van der Noord, Hans Kreisel, Patrick Diethelm and Nick Vardalachos. Except Hans Kreisel all of them are in the 50 knots+ club.

The only one missing is French Slalom Pro Cedric Bordes, who managed to sail 50.23 knots in 2012, but is not participating in the event in 2013.

In total more than 20 windsurfers managed to go faster than 45 knots on 500 m.

Markus Emanuelsen from Sweden was going really fast with an average of 48,72 knots on the 500 meters. Manfred Merle from Germany reached a new German national record of 47,86 knots. Remo Diethelm, the brother of Patrick, felt great, too and made a run with 47 knots.

Anders Bringdal is so far the fastest speeder at Lüderitz.

“On November the 1st, the wind came back with an average of 30 knots and higher gusts. It was a great day for all the riders, as everyone enjoyed the improvements made on the channel which increased their performances in less wind. These conditions were especially appreciated after a week without wind. We celebrated a new record today with the Luxemburger David Garrel, who once again broke the National Record with 47.81 knots (was 46.37 knots). Patrick Van Hoof, the Belgian, with great performance managed to reach 47.65 knots today. He was very close to almost beat the Belgian National Record of 47.72 knots once again but has beaten the Belgian Record on Production board, held by Ben Vanderick few weeks ago (42.68 kts), during the day with 46.06 kts. Another beautiful day that has been crowned by the best performance of the year in Windsurfing for Anders Bringdal who did 50.43 knots, in front of Antoine Albeau who performed a 50.07 knots few days ago.” (Sophie Routaboul)

So far Anders Bringdal is the fastest rider at Lüderitz, Namibia this year. The forecast looks promising for November 9th and 10th. The event has started on October 7th and will run till November 17th.

Anders Bringdal talks in the interview with Sophie Routaboul about the channel, the improvements in his equipment and the chance to see a new record during the 2013 event.

Some video impressions from the 50.43 knots run by Anders, the fastest run of the this year’s event

Have a look on the best times on November 1st. The fleet has high quality. Antoine Albeau, Hans Kreisel, who is there for the first time and Jurjen van der Noord are fast. These are the best speeds from November 1st, the fourth day including speed pros. 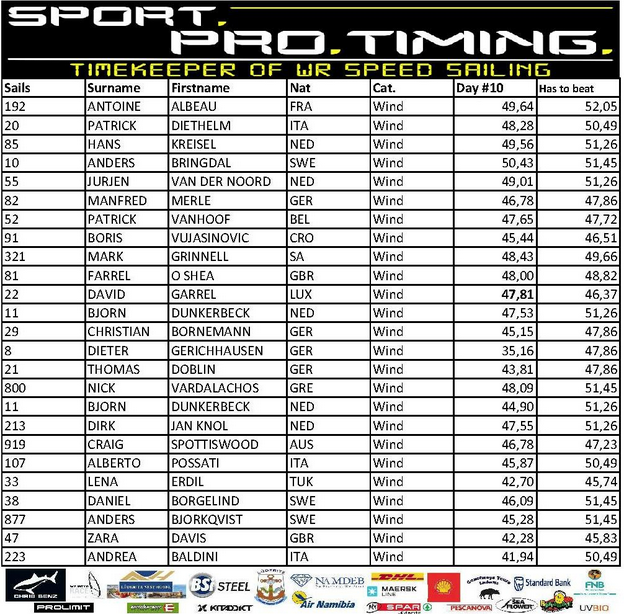