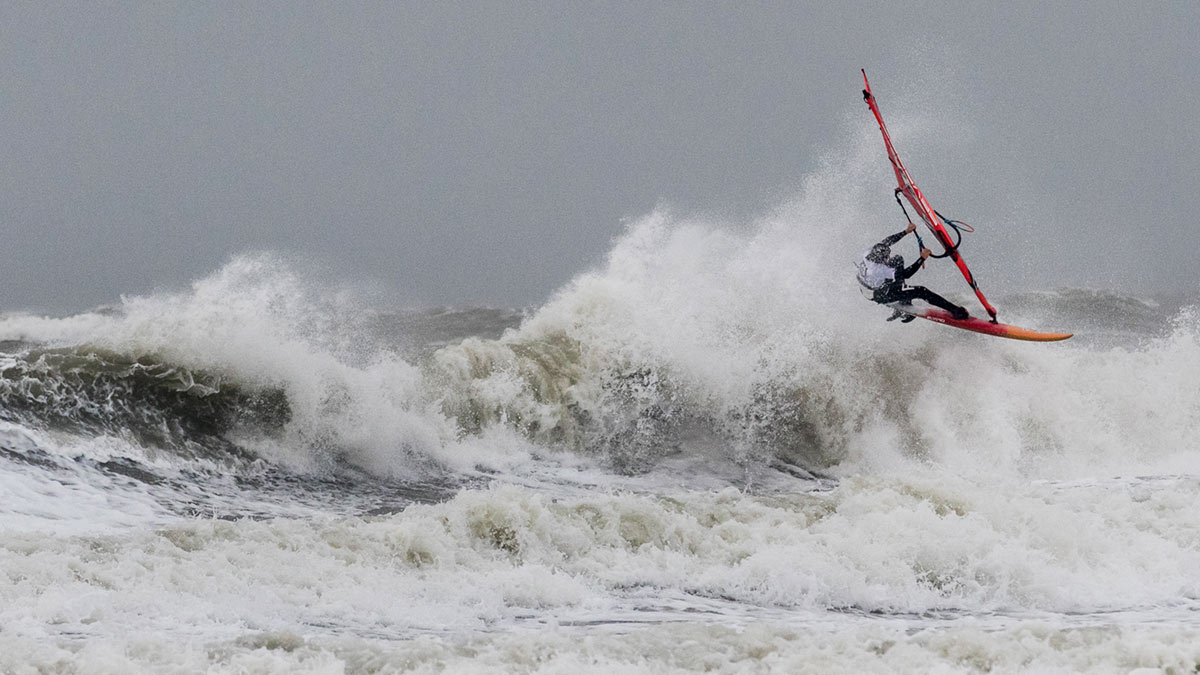 On Sunday I finally had the chance to compete in a local wave competition since 2014. A proper storm hit Domburg and after 9 weeks of waiting the Slag om Domburg could finally happen! I was more than lucky to be able to join as this Sunday was one of the only dates within the waiting period where I would actually be able to join due to the busy competition/traveling season this autumn.

The conditions where rough. The wind was going up the 50 knots+ mark. Everyone was mostly fighting the elements rather than fighting their opponents. The waves built up pretty quickly and the action was amazing considering how hard it was to sail.

I was for the first 2 rounds on my smallest gear, 3.3 Blade and Ultrakode 72 which I barely could control! I must say at this point I couldn’t see myself winning the contest as I was struggling too hard in my jumps. After seeing the heat from Pim Van Der Borgt and Eric Rutjes I was pretty sure one of them would walk away with the big trophy. Pim landed a sick Double in those super strong conditions while Eric almost topped that with getting really close to a Pushloop into Forward!! That are jumps that make massive differences on the Worldtour and that was happening on a contest here in the Netherlands! Insane!

By the semi finals the wind had dropped a bit and I was more than happy to be back sailing on my 3.6. I was back in control and was probably sailing my best heat of the event to qualify for the final! The tide had come in quite a bit and the current got so strong it was almost impossible to stay upwind, making the jury decide for a 15 min final. The wind had backed off even more and everyone was now on 4.0 and a bigger board. I really struggled in the beginning of the heat but in the end I managed to find two good waves and scored a good jump to take the win in a very close final!

Big thanks to the organisation who did a great job! It was all organized by windsurfers who sail at Domburg most of the time and always give anyone tips where to go best with any direction. I’m happy for them they realized the first ever windsurfing contest on their home spot during one of the strongest storms of the year! Hope to be able to join again next year!