Bouke Becker has been shaping windsurfing boards since 25 years. In 1993 he came to the island of Fuerteventura and opened his own workshop in Corralejo, where he founded Witchcraft Sailboards, known as one of the most durable windsurfing boardbrands on the market.

We caught up with Bouke to find out more about his high durability boards, Quadfin boards and how things are running at the moment. 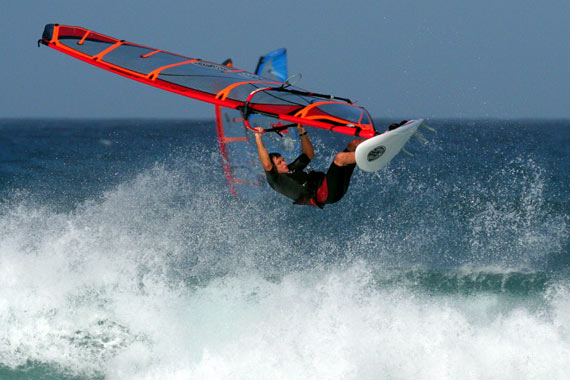 C7: Hi Bouke, you just released your 2010 boards, the Wave V3.0 and the Chakra V2.0. The boards look excellent. What are the highlights of these models?

Witchcraft Sailboards-Bouke: The Wave V3.0 has become more radical with the Chakra as an easier wave shape added. We have concentrated mainly on improving the wave riding as that is where the board counts the most. Our progressiv rail shape has changed making it more fluent even if there is a little less added rail rocker as before, therefore we have increased the all over parabolic rocker. Also the outlines have changed a little, the bigger boards have become a little wider, the smaller a little narrower. Tail widths have increased a little to compensate for the added rocker so the board keeps going better at lower riding speeds. The Chakra is our cross over shape from wave to FSW. The tri fin system makes it a very versatile board for use in waves or flat water. The new Chakra has received the same new rail shape as the wave and has a slightly changed rocker line to make it run over chop better. The rest has remained the same. We have added a 71 and 114L board to the range.

C7: Are these two lines produced in production?

Witchcraft Sailboards-Bouke: Yes, in our own factory in Bulgaria. 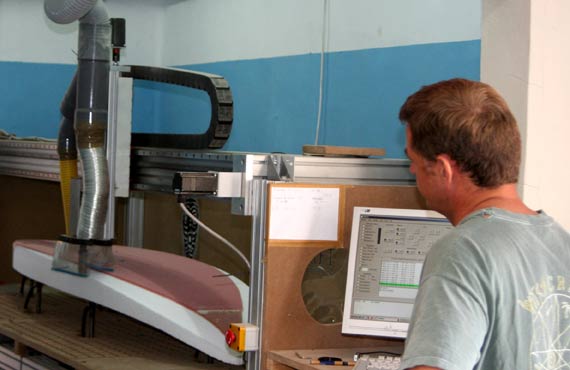 C7: Will you realease Quad Boards as well in the near future?

Witchcraft Sailboards-Bouke: No, there is no area where a Quad is better as a tri fin, but there are areas where a tri fin is better than a Quad. Versatility is one of them.

C7: When did you start the shaping and repair business on Fuertventura and why?

Witchcraft Sailboards-Bouke: I came to Fuerte in ´93 but had been making boards for a hobby since ´85 on Terschelling, a Dutch North Sea island. For 6 months I worked as a windsurf teacher, but had brought my tools from Holland and soon was repairing boards in the evening. So I decided to open my own work shop here in Corralejo. 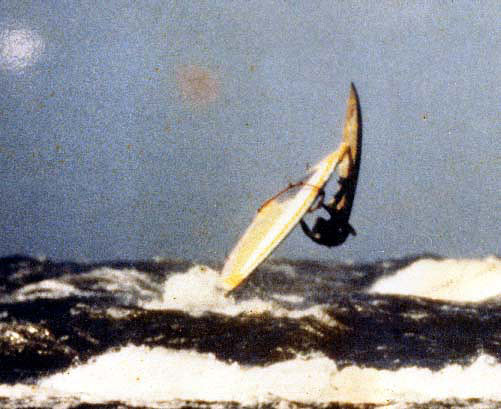 Windsurfing on Terschelling back in 1987

C7: How long and wide was the first windsurfing waveboard you shaped back in the years?

C7: How does a Witchcraft board feel when riding it?

Witchcraft Sailboards-Bouke: I am the first one to admit I like to get more than my fair share of waves without dropping in on people. So you need a board that planes and goes up wind well. We have a lot of excellent point breaks here but the winds are lighter. Still once you are on a wave you want it to ride excellent as well. So, using basic hydro dynamical laws where ever possible, I have tried to combine various shape details that harm other performances the least. As on average we use bigger boards to get out but do get fast once on a wave. The boards have a lot of grip to be able to keep control and turn tight at speed. This is mainly due to one of the biggest differences in shape to other brands: I make the rails in the back half pretty much sharp. This gives bite, drive, responsiveness, precision and improves planing and upwind ability. Also our tri fin system, which I have been developing since 12 years, gives very good maneuvrability and drive. It adds a lot to the versatility and range of use. In the beginning we built maybe 10% tri fin boards and this has grown to the last 5 years practically 98% are tri fins. I still see many mistakes in other tri fin or Quad boards, which have come on the market now, many of which I made myself over the years. Other stand out features are the inverted V bottom shape and the parabolic rocker line. I am working with parabolic rocker lines since ´87 and the inverted V since 2 years.

C7: Could you develop the brand Witchcraft in a way you planned?

Witchcraft Sailboards-Bouke: If someone would have told me 15 years ago where I would be now, I would have adviced him to have his head checked. But on the whole I have always been working on a sustainable business, concentrating above all on quality rather than quantity. My strength is in designing and building boards, not marketing. Had I known a lot more people in the PWA or industry, like Seb Wenzel, things probably would have gone a lot faster. But I am pretty happy with the way things have gone so far like this as well. Full creative freedom without a bank loan or marketing manager on your back is also worth a lot.

Aerial time at Glassbeach in 1997.

C7: Is Witchcraft growing in a shrinking windsurfing boardmarket?

Witchcraft Sailboards-Bouke: Growing steadily but surely. Demand has always been a little higher as what we can produce. Slowly we are expanding with our own resources. Due to the crisis we had to put our bigger expansion plans for a new bigger factory on ice as it is very hard to get loans out of banks at the moment. At the moment we produce about 300 boards per year, over the last few years this has grown with about 20% each year. The easy way would have been to go to Cobra but I decided to do it my way. Ha!  Maybe we can offer shares to our customers…

C7: Most boardproducers promise high durability! What´s your opininon about durability of windsurfing boards and can Witchcraft deliver more durability compared to other brands?

Witchcraft Sailboards-Bouke: We put too much effort into building a board to make “disposable” products. I hate it myself if a board dies unnecesary. And I hate to miss a windsurf day because of avoidable equipment failure. And stuff does not break when there is no wind. It depends on the person how strong a board needs to be. For many people, most production boards are fine if they are carefull. For others they aren´t. Either because they do not like to be overly carefull, sail a lot, use less boards, like a strong board to travel, sail on a decent level or want to save the environment. If someone wants to change their board more often, they will get a higher resale value so it is cheaper to buy a new one. There is a high demand for used Witchcrafts.

C7: What makes your boards so strong? I mean, you give 18 months guarantee on the HDD versions.

Witchcraft Sailboards-Bouke: There are many reasons, quite a few which I like to keep secret. One main reason is the use of Dyneema, the strongest fibre on the market, also used in bulletproof vests etc. I have specialised in working with Dyneema since 14 years. Dyneema is difficult to work with, also simply because it is so strong. But you have to know how it works, you can not simply replace carbon or glass with Dyneema. Dyneema also has less good properties which have to be solved in other ways. Where as we are a small company, in quality, technology and innovations, we are pretty much ahead of everyone. Also our CNC production system is the most advanced in the world. 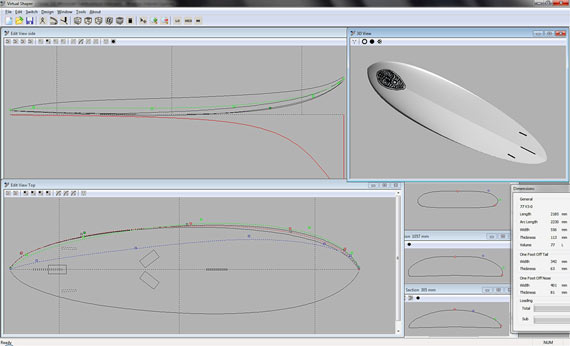 C7: Where do you sell your products mostly?

Witchcraft Sailboards-Bouke: Apart from Fuerteventura and the other Canary Islands, Holland has always been a good market, as I am Dutch it has always been easier to get my technical articles published there. But also the UK and Germany have been good markets. Since we started producing our semi custom boards in Bulgaria in 2007, many other markets are growing: France, Italy, Belgium, Scandinavia, Spain, Greece and overseas like Australia and the US even if the exchange rate has not been favourable. The internet helps a lot to spread the word nowadays because with some magazines  it can be hard to get something published with our marketing budget, no matter how interesting these articles are for their readers. For those magazines who have published articles unconditionally, I try to give them as much credit as I can and certainly will be the first to be rewarded once our marketing budget can grow.

C7: Your boards look definitely a bit different compared to many other waveboards on the market. Does that mean you seldom have a look to other products on the market?

Witchcraft Sailboards-Bouke: I do look at what others are doing. Sometimes I see things I like or it gives me ideas into what direction to go or what to explore. In many other things, I think I am ahead. I am always questioning things and try to find ways to improve the whole, not just one aspect and lose on another. On the other hand, I have certainly also learned from mistakes in the past and who knows what I could do better now? Time will tell, If I knew now I would change it right away. Thanks to our CNC production system without moulds we can put changes through quickly and whenever I want. It also allows us to have a wave range of 13 sizes…. 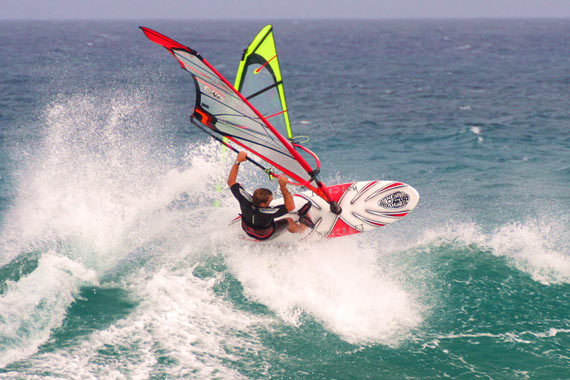 C7: Do you see a revival of custom products in the near future or did it happen already?

Witchcraft Sailboards-Bouke: Not really, building (good) boards has become quite technical to learn. You can´t just follow a course to become a shaper. It takes a lot of skill, technical knowledge, talent, experience and years of perseverance, because the first years, often you find you have worked for nothing. And where you are based also matters a lot.

C7: Would you like to see your products on the PWA Tour as well?

Witchcraft Sailboards-Bouke: Yes, but at the moment we can not afford to sponsor these guys. It would be more for my own pride than anything else anyway. For developing I do not really need them. You do not have to be on the PWA to be a good sailor. And any promotional effect would be wasted as well as we could not build anymore boards at the moment either. I think the PWA should lower their price money demands to have more events and should limit the amount of wave boards used in a season to 2 or max 3. Also their scoring system should be changed a little. To me it does count if I would get 2 or 4 waves in the same time. That would force brands to increase the range of use and durability of wave boards. And that is where we have the advantage…….

Please check this out !! Thank you

Nice Sailboards good luck with your work, seems like you have it figured out.

Great interview, I agree with pwa ideas. wish you luck!