Tourists of the Sea Episode 2 – Interview

We recently met up with Kevin Pritchard in the Austrian Alps during his Snowboard trip. We had a chat about his latest film project, the Baja trip, episode 2 of the “Tourist of the Sea” project. Big south swell hit Punta San Carlos, mixed with strong wind. It was probably Kevin’s best trip to Baja California. This time he shared his time with Graham Ezzy and Johannes Neumann. Read the background information about Tourist of the Sea Episode 2 and don’t miss to watch the great wave sailing clip! 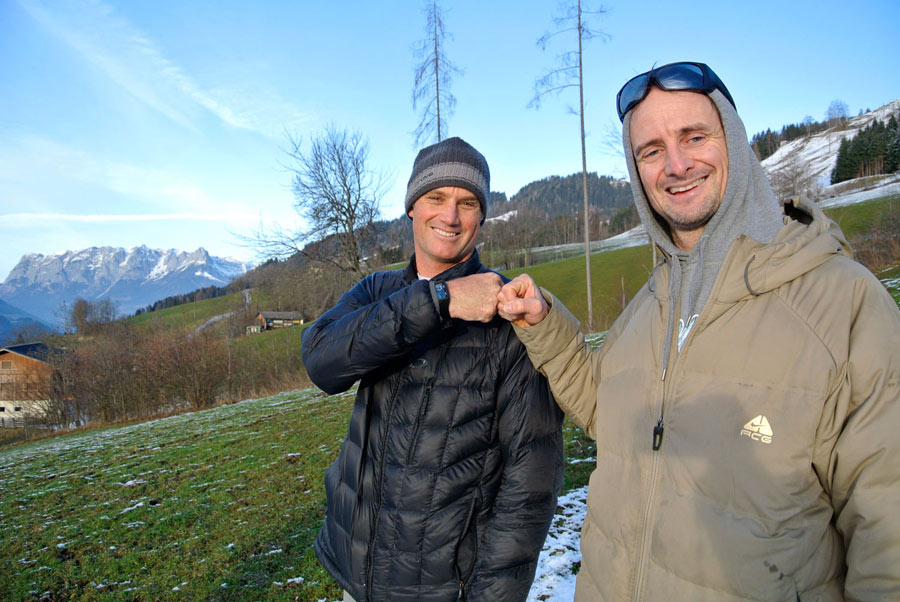 January 1st, a hike in the Austrian Alps, talking with Kevin about his trip to Baja

Continentseven: Looks like you are living a wild life, just following the best swells. Is that a part of windsurfing many windsurfers forget about?

Kevin Pritchard: I don’t know about wild, but yeah, it has been great. As I look back on 2013, it was an awesome year. I keep telling myself to push through it and do the work it takes to get the swells. While it looks like it is all fun and good times, which it is sometimes it takes some motivation to make the last minute move and go for it. To me it is so much fun to score good wind and waves.

Continentseven: For how long did you stay at Punta San Carlos?

Kevin Pritchard: This trip we were only there for 4 days. Just came for the swell and then that was it. We rolled in just as the swell was starting to pick up! 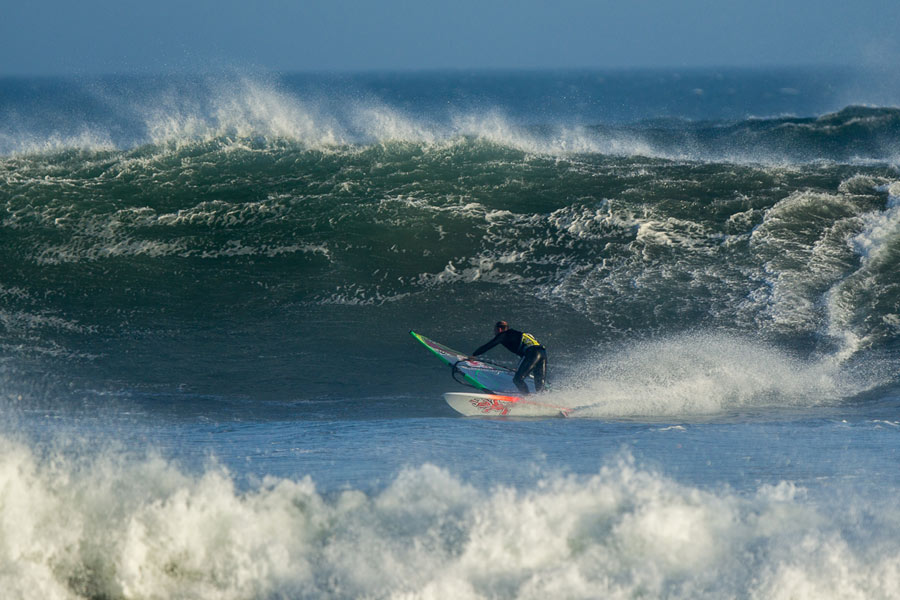 Kevin with a big Bottom Turn at Punta San Carlos

Continentseven: Why did you decide to choose a spot at the Pacific Ocean again?

Kevin Pritchard: It picked us! It was one of the bigger south swells of the year so and we all could make it so we were like, lets go. It was hitting San Carlos perfectly so we went for it!

Continentseven: The clip is really nice. It reminds to surfing style. No jumps, just riding and off the lip moves! Was that the goal from the beginning on to produce something, which shows the beauty of wave sailing?

Kevin Pritchard: Baja is pretty perfect for wave riding. It is better for waveriding for jumping so that is what we went with. The waves were actually pretty big and and it was hard to do super tricky moves. It set up for pure waveriding, carves, power, airs, but not too many tricks. 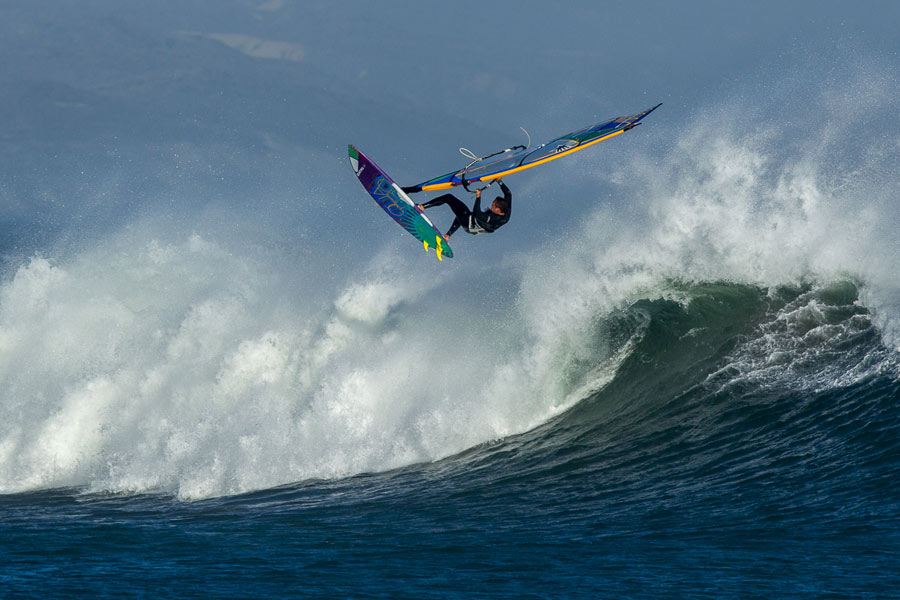 Continentseven: How was it possible to have no other riders in the picture? There were many vans parked on the cliffs of Punta San Carlos.

Kevin Pritchard: There were no other riders out!! I think the big waves scared them away. It was good from dawn to dusk! We had the whole point to ourselves! You wouldn’t believe it but it was just pure epicness!

Continentseven: How many times did you visit Punta San Carlos? Were the conditions at its best this time? 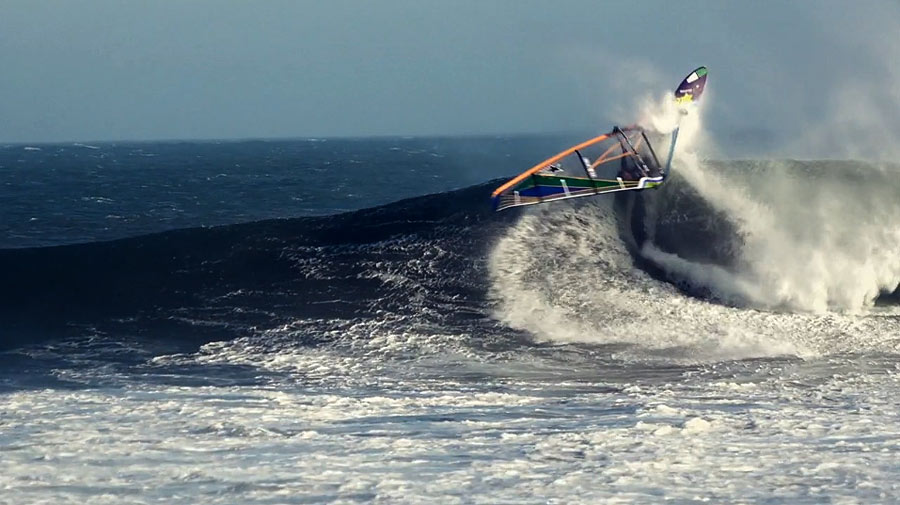 Graham had a big grin on after this perfect wave 360, too

Continentseven: Kevin, you mentioned the waves are great to learn sailing in waves. Why are the waves and the overall conditions so ideal to learn wave sailing?

Kevin Pritchard: You can see that even though the waves were big, it was still playful. You can also see that the waves are so long and gentle, that it is easy to learn. You do ten turns and you keep learning with every turn. 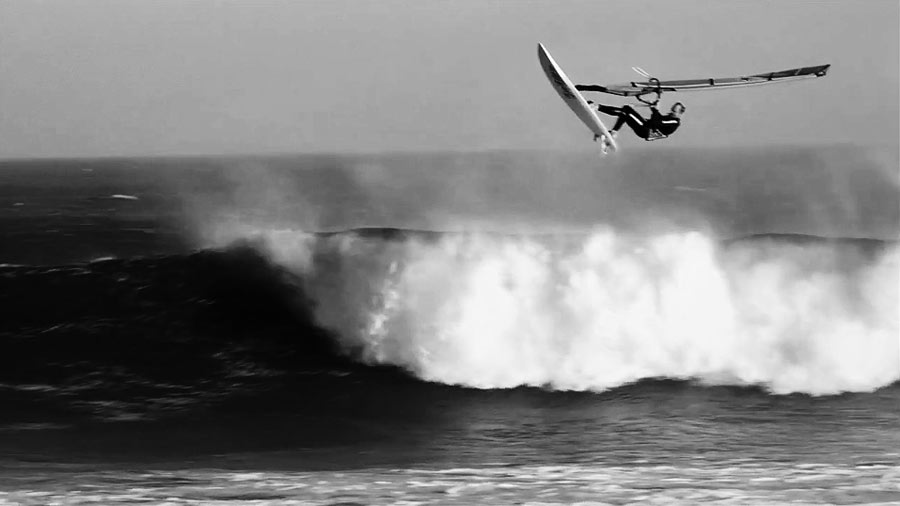 KP with a big Aerial off the lip

Continentseven: Is it worth to travel there for a few days? What’s the distance in hours and kilometers from Los Angeles?

Kevin Pritchard: For this trip definitely… It takes about 9 hours of driving from Los Angeles. I am not sure the distance but the roads are not super fast driving, there are a lot of towns and it just takes time to get there. But it is worth it!

Continentseven: What were the costs for each of you to realize the trip to Baja?

Kevin Pritchard: I had the cost of my ticket, which was $500 from Salt Lake City, then the gas was around $300 plus the food. I was able to stay with Solo Sports, which is pretty much the way to go. You get all your food breakfast lunch and dinner, drinks, a hot shower at the end of the day. It is not really roughing it, it is awesome. The guys there know the place, Joey and Kevin, run the show, and the rest of crew make your stay really nice. It makes the Baja experience pretty first class. You still stay in tents, and you are still out in the middle of nowhere, but it is definitely easier than planning all your food, water, camp equipment, which all adds up as well. I would say it is worth it.

Continentseven: How much gear did you bring this time, camera and windsurfing?

Kevin Pritchard: I brought one windsurf board and a 5.3m and a 4.7m. The day we got there it was blowing 4.2m and lucky for me the guys at Solo Sports had a 4.2 Ezzy Elite for me to use. They really saved me!! 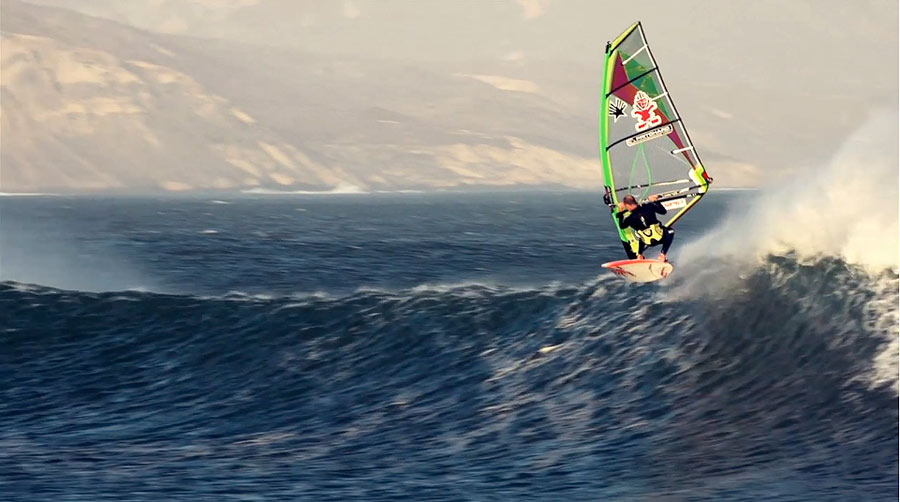 Kevin did not break any gear during the big days

Continentseven: You are well known for high end film equipment. Did you bring any new innovative cams or additional accessories kit?

Kevin Pritchard: Not really. Just my faithful Sony FS 700 and the water housing for it. The first three days it was too big to swim out there for water shots, there was so much water moving around. The Sony loves a nice water shot so I really tried hard to get a couple water shots out there!

Continentseven: What’s the most important thing to bring to Baja?

Kevin Pritchard: Hmm, that is a tough one. Besides your windsurfing kit, I would say water! It is a long drive and while you can get water when you are down there, if you break down out in the desert it could be deadly. You also have to be on your safety game. Driving down there is pretty tough, you need to be aware of what is going on, and you don’t want to mess around.

Continentseven: How far away from the spot are the next market, patrol station, paved road, hospital,windsurfing shop?

Kevin Pritchard: It is a 2 hour dirt road to where the market and gas station is. The hospital the same, but I don’t think you want to count on that hospital. A windsurfing shop is not till back in Los Angeles. Although the guys at Solo Sports do have some gear you can negotiate for!

Kevin Pritchard: I am in Portugal as I type! On my way to Cabo Verde! Not sure if we will have time to film stuff, but I am going to try!

Continentseven: Do you plan to travel to spots in Europe, Asia, Australia or Africa to produce any new episodes in the near future?

Kevin Pritchard: I would really like to do something in France and Ireland. That would be fun!