The Tiree Wave Classic is in its 24th year and takes place from the 9th until the 15th of October 2010 on the furthest westerly point of the Inner Hebrides, Scotland. Since its humble beginnings in 1986 the Tiree Wave Classic has matured to a truly spectacular event which is further evidence of Scotland’s growing reputation as a stage for top athletes. Competitors from all over the UK will be battling against each other in the harshest conditions the UK has to offer, to win the ‘Tiree Wave Classic’ title and to improve their chances of winning the coveted BWA UK Wave Championship.

Dozens of the top wave windsurfers gathered on Tiree for the world-renowned “Skykon Tiree Wave Classic” faced frustration on the first day of the competition when the recent winds that have thrashed the island failed to return. After a long wait for the breeze to fill in at Balephuil Bay in the south-west of the island, the females finally took to the water for their first round in the late afternoon. In just 10-15 knots of breeze from the east, the female entrants started at 5.45pm in what the judging panel described as ‘tough conditions’ due to the light winds.

The British Wavesailing Association’s Head Judge, Duncan Coombs, said: “The standard of the women is stronger than we’ve seen in previous years and the Cornish girls did really well today on the back of their wave riding experience.”

Debbie Kennedy from Hayle in Cornwall won the first heat, with fellow Cornish entrant Jodie Ward finishing in second place. Helen Bainbridge finished in third. “It was a challenging round in a light, onshore breeze. It was great to win the heat as it’s my first time at the Tiree Wave Classic and I only started wave windsurfing in May,” Kennedy said.

Coombs said that the judges are closely monitoring the weather conditions and all the entrants are on standby to compete. At a briefing on Saturday evening competitors were warned to prepare for dawn starts or late starts, to take advantage of conditions as they arise. “The weather here on Tiree can be very unpredictable but the many beaches around the island allow the competition to take place regardless of which direction the wind is coming from,” Coombs said, stressing that the competition can go ahead without too much wind as long as there is sufficient swell.

Result women round one

There were no other rounds sailed. 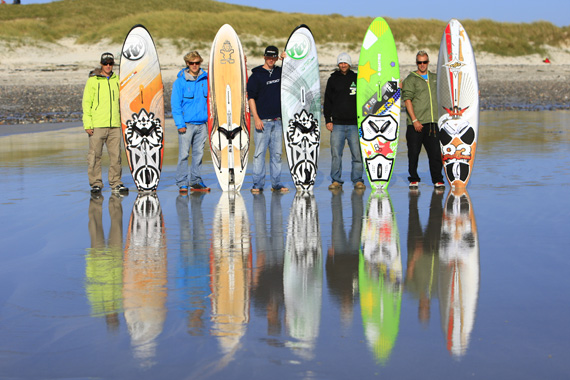 You can also follow the event at www.twitter.com/tireewave and become a fan of the Tiree Wave Classic 2010 on Facebook.

medea2010-10-12T19:08:20+02:00October 11th, 2010|
Subscribe
0 Comments
Inline Feedbacks
View all comments
This website is using Google Analytics. Please click here if you want to opt-out. Click here to opt-out.
0
0
Would love your thoughts, please comment.x
()
x
| Reply
We use cookies to ensure that we give you the best experience on our website. If you continue to use this site we will assume that you are happy with it.OkNoRead more