Thomas Traversa has won the second mission of the Red Bull Storm Chase in Tasmania. The 27 year-old Frenchman from Marseille scored excellent points for his waverides. Head judge Duncan Coombs said“Thomas rode the surf in the most critical situations and looked totally in control – it was like he was playing with the storm while others were struggling in comparison”. What might be perplexing for some people is, that he weighs just 60kg, but sails in strong winds like a heavyweight. We have caught up with Thomas to speak with him about the second Storm Chase in Tasmania.

Continentseven: Let’s start from the beginning. How was your journey to Tasmania?

Thomas Traversa: I was in Germany the week before the Red Bull Storm Chase got started, and fell sick 2 days before we left. I was puking and had fever for 1 night and 1 day then I received the Go message and spent another night and day in bed with fever, until I had to leave and drive to Frankfurt to catch my plane in the evening. Luckily I was already getting better and could recover during the long trip.

Continentseven: When you were driving to the first spot, which was Temma, how were the feelings among the riders?

Thomas Traversa: We had a briefing the day before so we all knew it was gonna be big and messy, and kind of onshore, so when we left the house at 7 in the morning nobody was really excited to go sail, I think we all wanted to get through this first day as fast as possible! When we arrived at the first spot early in the morning the wind was kind of light and it did look unorganized and tricky out there, so we were hoping for the conditions to get better, even if we all realized I wasn’t gonna be what you’d call a “fun day at the beach”.

Continentseven: Which spot was more difficult to sail? Temma or Bol?

Thomas Traversa: Temma was obviously harder to sail, it is a very small bay, there where some nasty big sets breaking on the rocks downwind of the channel. The channel itself was very narrow, and as soon as we were getting to the right side of it, where we were actually supposed to ride, it was all white water, breaking really far out, and it was difficult to see where we were and where we had to go. Then in the inside the wave was getting cleaner, but it was breaking right in front of rocks, and with the wind being very onshore it wasn’t easy to do anything.

BOL was very clean, with a huge channel, it was actually easier to get away from the wave than into the wave, because of the strong current. So I didn’t feel like it was dangerous. The wave itself was hard to read, and it was hard to pick the good ones. but once you did it was pure cross off down the line, with proper size in the sets. There are 2 different sections breaking over 2 pieces of shallow reef, so in those 2 spots the waves were getting very fast and hollow, with the kelp sticking out in front of you most of the time. Tricky but very good wave!

Thomas Traversa: I didn’t feel like it was dangerous, as long as you stayed away from the meaty waves on the other side of the channel (on both spots ). The 2nd day at BOL, the swell was very very big on the outside, so the waves were really heavy and powerful, but it made it even more exciting! I would say that it was challenging and hard, not dangerous, especially with the jet skis around.

Continentseven: Which gear did you use?

Thomas Traversa: I used my 3.7 and my 65 liters board (same as always) with a quad fin set up both days, the wind was up and down and there was a lot of current and waves breaking everywhere. I broke my 3.7 the second day so I had to finish the comp with 4.0 but it was alright. 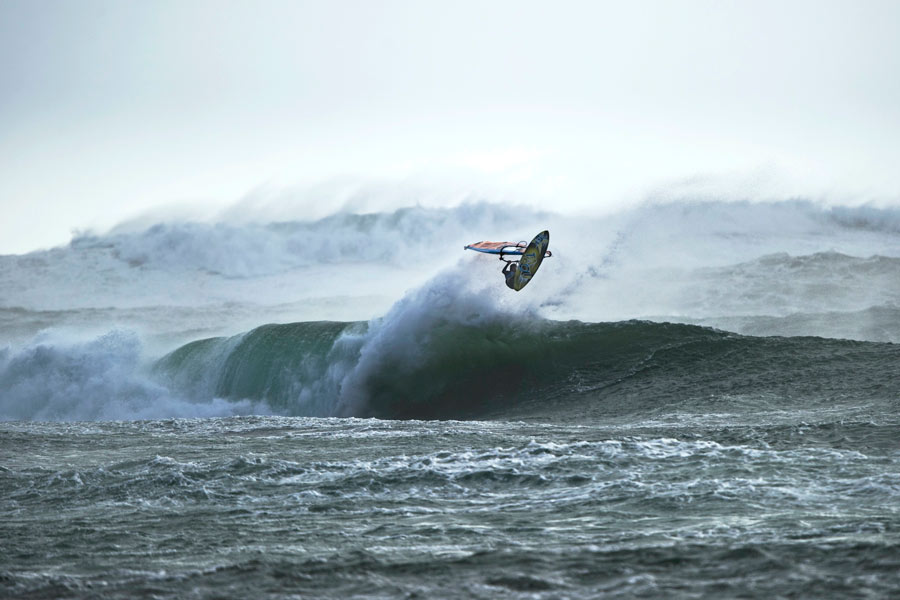 Continentseven: How was the feeling when you crashed?

Thomas Traversa: Well when you get washed you just hope to get back to your gear as fast as you can and be able to sail away from the rocks, like at any other spot with rocks. But we had jet skis to help us anyways, so the main concern was not to break the mast or the sail.

Continentseven: Was there any moment which scared you?

Thomas Traversa: Not really, or maybe one time in Temma, when I sailed deep to the inside. I tried to go upwind to get a jump on my way out, and didn’t realize how close I got from the rocks until this piece of reef came out just in front of me, but I was fast and lucky enough to squeeze a quick tack over the edge of the wave before it broke on the dry rock.

Continentseven: On the videos your sailing looked very controlled, as if it were your homespot.  Did you ever sail in conditions like that before?

Thomas Traversa: The waves are always small around Marseille, so I had to travel a lot since many years to get some real wave sailing conditions. The winter conditions are a bit similar to this in Brittany, Galicia,  France and Spanish Basque Country, and especially Ireland. I have been chasing a lot of big swells in those places with Alex, Julien, Timo, JB Caste and other friends… so I am kind of used to sailing at spots I don’t really know, with big waves, cold waters, current, rocks, etc… Canary Islands or Indonesia can also get really big and tricky. I had to learn how to adapt really quickly to new spots like this, because most of the time you have only one day with the right wind/swell combination, so you kind of have to look very closely at the lineup, and then go for it 100% almost from the beginning if you don’t want to miss your chance to get some really good rides. 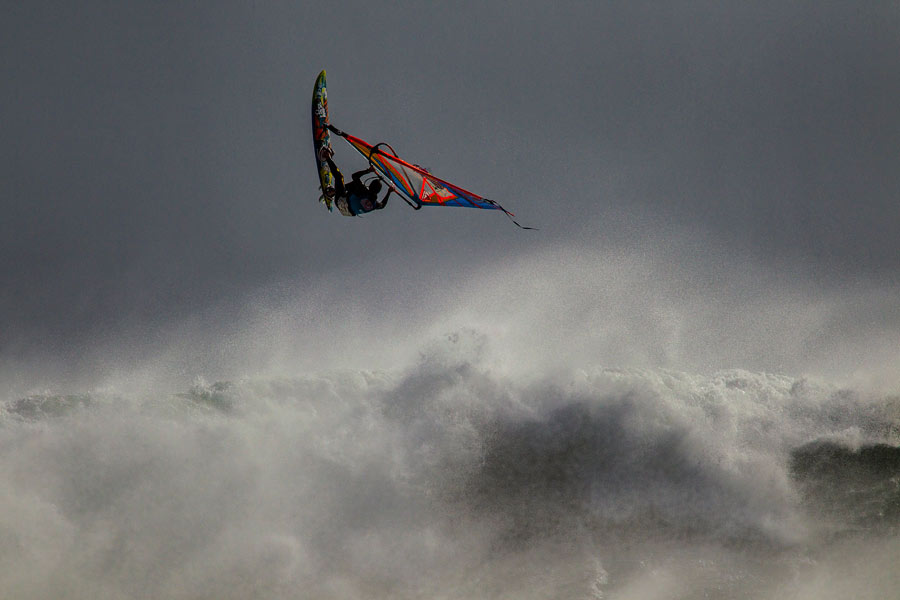 Continentseven: You are the lightest of all the 6 storm chasers, but obviously you managed to sail in this heavy, stormy conditions best. What are the reasons you can cope best with heavy conditions?

Thomas Traversa: As I said before, I think I have quite a lot of experience in those heavy conditions, and even more important I really like it. This is the windsurfing I prefer, arriving to a new spot with heavy waves (it doesn’t have to be huge to be heavy) and try to find the balance between your fear and the excitement, to make the most out of it. I imagine it is a bit like alpinism, when the guys look at a new mountain and decide to try getting to the top, but of course windsurfing is much safer than alpinism!

Continentseven: Would you book a windsurfing holiday to Tasmania to sail at Marrawah?

Thomas Traversa: If it wasn’t so far I would say yes straight away: many spots, a lot of wind and swell, no crowds, beautiful landscapes, very cool “real” people, a lot of wildlife…and it’s not even that cold in the winter! But it is a mission to get there, so you need at least 1 or 2 months in front of you. Hopefully I will make it to go back one day.

Thomas Traversa: I think Cape Hatteras has the smallest probability to happen from the 5 locations, and I already know Iceland, Brittany, Galicia and Omaezaki… I guess Brittany could offer the best stormy conditions at Iles-aux-Vaches, and in Galicia we could sail in some beautiful places, so they are my two favorites.

Continentseven: What’s the goal for the final mission?

Thomas Traversa: Once again, the main goal is not to get hurt, and be happy with my sailing.

Continentseven: Good luck for the upcoming events and the final mission!

Thomas is incredible! He is so talented and has such a nice attitude.
I really hope he wins in the end: he really deserves it!