“The first Swiss Freestyle Battle 1.0 delivered the proof, that the Swiss windsurfers can definitely freestyle very well. I just stood at the shore, the eyes wide openened, watching the best freestyle sailors from Switzerland. I was impressed indeed. It was definitely a big show!” Adrian Beholz, one of the best German freestyle windsurfers, stated about the event. 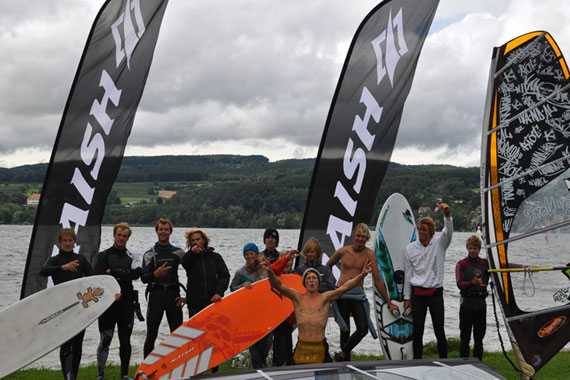 The event was planned to be done on the Lake Urner. But the location for the event had to be changed beacuse of a bad windforecast and so it happened at the Lake Constance. Actually funny, the event happened on German terrain, but the Swiss sailors proofed high flexibility and got rewarded by very good conditions.

Oli Stauffacher (Sui-111) just returned from Egypt and performed great in his heats: Skopus, Air Funnels directly in front of the crowds.
The other finalists Gregor Schöneich (Sui-256), Pete Scheuble (Sui-969) and just 16 year old Baltazar “Balz” Müller were performing on an extremely high level as well. Balz is definitely the newcomer in the Swiss freestyle scene and has big ambitions for the near future.

However, this first Swiss Freestyle Battle saw still the “old-hand” freestylers on top with Pete Scheuble and Gregor Schönaich in the winnersfinal and Oli Stauffacher and 16 year old Balz Müller in the final for place 3 and 4. Unfortunately the wind died during the finals, so in the end there are two first and two third places. All in all it was great event and the next events are already being planned.

Congratulations to the winners from continentseven.com as well!

hahaha yeah what s up with that kitesurfer style

they are really bad in freestyle