Steve Palier organized together with top wave pro Thomas Traversa and JB Caste the “Wave Classic Invitational” events for two years. The slogan of the events were “just another vision of wave riding”. A selected group of riders got invited and fought in teams for the best results. The events saw epic conditions at the North Shore of Fuerteventura or at the extremely dangerous reef breaks of La Reunion. Big videos and photos delivered the proof of the insane conditions. The events have become subject to a crossfire of criticism because of the fact that top sailors would compete for no price money. Some days ago Steve Palier, the organizer, announced that he will stop to run the “Wave Classic Invitationals”. “The decision is taken since 2 weeks now: the  Open Ocean Media company that was in charge of  the organization and media coverage of the ‘Wave Classic Invitational’ events since the 1st edition of ‘La Reunion Wave Classic’ in 2009, will not propose further stages in 2011.”

We asked the French now, who founded Open Ocean Media in 2009, why he decided to stop organizing the events.

C7: You announced on your website, that you will not continue with the Wave Classic Invitational events in the future. Can you tell us why?
Steve: I will not tell everything about it, but after 2 years of successful Wave Classic Invitational (WCI) events, it’s a fact: despite a huge media coverage worldwide (+250 pages of publication, +300 articles on the web, 75 min of TV reports, +1 Million of downloads for our videos), we did not receive any support -however small it could have been – from the windsurfing industry. It sounds like a total lobbying. Then, when I have sent a questionnaire to the riders at the end of the season to try to develop the project in their direction I only had received 5 answers. So I told myself it was not worth getting tired to organize these events. Because it is a lot of work by the end of the day! 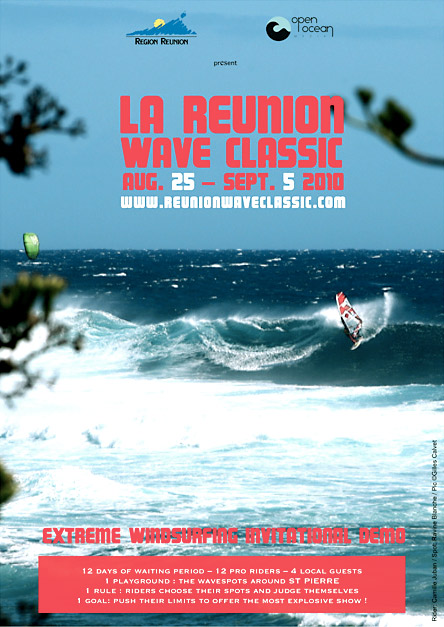 That was the last event, which had happened in 2010.

C7: You wrote on the “Wave Classic” website the following: “At the end, nothing to win, no prize-money but different rewards for only one thing : the images and the show! The main goal on each stage of the « Wave Classic Invitational » remains the same: push the limits of wave sailing, do the show, capture the most radical images of windsurfing, share the trip & promote the sport and the local destination!” I guess the goal was achieved with sick images and amazing video footage from Reunion or Morocco for example. Would you now say the basic idea failed?
Steve: The idea and concept were still on after the last contest in La Reunion. Nobody wanted to change it, or maybe simply change a bit the team format. If you look at the feedback from the media and from the public, the concept initiators Thomas Traversa and JB Caste were pretty right with this “different vision of wave riding”. A thousand of people have dreamed with our images, even people who did not know anything about windsurfing, like my uncle, who is now almost 70 years old! It´s a pity, that the project stops now, especially as 4 to 5 stages were planned in 2011: Cape Verde, Morocco, Portugal, Reunion and Mauritius.

C7: How was the feedback from the industry about the events?
Steve: Right after the first contest in Fuerteventura we could get a little support from some brands for the 2nd event in la Reunion. They were really happy with the coverage done on this epic contest. After this success I started asking some brands to get involved and help us with a small budget in exchange of visibility on the next events. I found a closed door. Then the riders of the PWA top 10 could no longer participate in our events, which did not really help. So since La Reunion in 2009 we received no support or assistance from the industry. However, our project was a very good complement to the PWA tour. We only can wonder,what are the real needs of the brands from their riders: only results? We were offering them a real additional support of communication. I just still do not understand.

Check out the crazy wipeout clip from 2010 at La Reunion:

C7: How was the feedback of the riders, when you announced that you will stop with organizing the events?
Steve: You really want to know? I have received only 5 emails from the riders, saying it is a really sad news. So what? 🙁
C7: What needs to be changed in windsurfing, that you would continue with the events?
Steve: The promotion of the sport and especially the whole communication about it. To me, this should start with the windsurf industry’s global marketing that forsakes the public and the beginners. This is why I had the idea to involve the riders to promote the sport in any way on every stage, organizing a special day to teach the basics of windsurfing to local kids. Ask riders like Zane Schweitzer or Kai Katchadourian! They always will remember this magic day in Morocco! That is the main thing to do all kind of windsurfing events, from a World Cup to a local contest, or even big public events like “Le Defi” : “Spread and share our passion”, supported by the pros and a top communication through various media…
C7: Would you like to add anything?
Steve: My passion is still alive!!
Thanks for the interview!

Steve,
Sorry to hear you are pulling out but not wholly surprised. Most sailors never appreciate how much work goes into running comps. Well done for achieving what you have and hope to see you around.
Nigel (BWA)

This is my first comment Umm.. Thank you For infomations I am like the Lowest Cheap.
Thank you.

But there is the American Tour! Sick locations and money.

those sponsored freesailing trips will always be limited to a group of guys from a certain sponsor.
the wave classic events had a much larger range of performers and the competition format gives the extra motivation to push the limits while riders don´t have to sail conservative to reach the next round.
This is – besides the excellent event locations – the major difference to pwa events.
the end of the wave classic series is definitly a loss to the wave sailing world
and for the industry it is a missed chance to promote the sport

So if the issue with the PWA is that the riders are competing for very little to no prize money at the Wave Classic, then why not just get rid of the competition aspect of the Wave Classic events? Wasn’t the original idea to get a bunch of pros together with the locals for a bad ass surf trip? No competition, just free sailing, with video crews and cameras documenting the action. Pro surfers take personal trips (on their sponsor’s dime) all the time, with the expectation that the images produced will add to the exposure from contests. Freesailing exposure… Read more »