The second day of the Reunion Wave Classic saw awesome conditions. Strong wind and nice running lefthanders at the extreme spot Ravine Blanche made a first round of competition possible. Most of the well experienced PWA Pro sailors convinced in their heats like Traversa, Bruch, Taboulet or Fernandez. 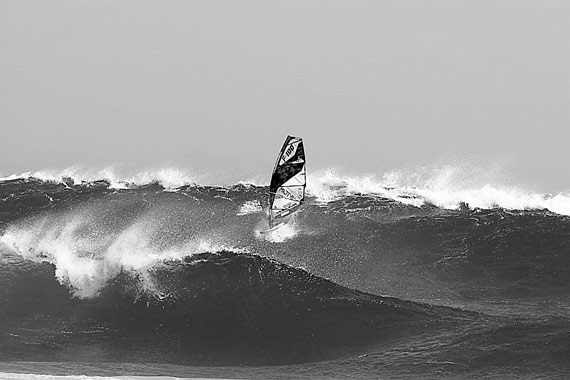 Here are some highlights of the 4 heats posted:

Heat 1 saw local Steven Pichot riding alongside McKercher, Voget & Traversa. Traversa got swallowed by a monster, that separated his board from his rig in the last minute of the heat! He anyway had already scored the best moves on the best barrels and won his heat and 4 points for his team.

In heat 2 top locals Zabala and Godet plus Goffinet and Fernandez fought for the best points. Fernandez surprised everybody on the beach with a really smooth style in his moves, scoring some solid rides, launching vertical rollers followed with nice landed aerials, a forward off the lip. His wave selection was pretty good, finding the way to work the sets all the way down and could win his run. Hot local Pierre Godet was also on form.

Young Irish ripper Clancy (19) could show his potential in heat 3 with Taboulet, Mussolini & Caste. Taboulet quickly scored some solid rides on “big mamas”. He also launched some of the most massive aerials of the contest taking most of the points, followed by a solid Mussolini and a well sailing Clancy, who got extremely ripped: “…went to the doctoer after the comp today t get some urchins removed biut he only got two out… i think i ended up the worst for cuts on my head knee back and feet… but it was worth it…” 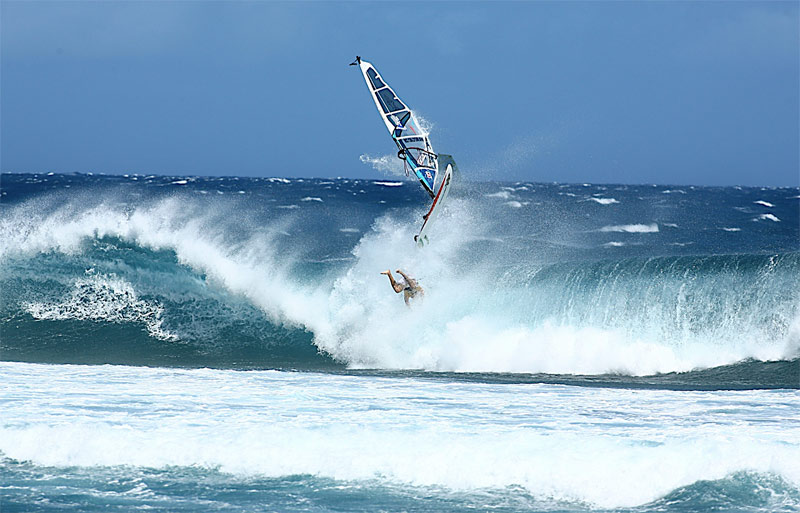 Mickey with the bail out of the day (©Calvet / Reunionwaveclassic.com)

In low tide conditions heat 4 was up, having Van Woerkens, Sifferlen, Bruch and Godet again, who replaced Juban. Camille J. missed his flight from Tahiti and should arrive one day later.
Bruch and Sifferlen impressed with their commitment. Teneriffe local Dani B. charged hard the big sections with style: long rides with vertical rollers and an extra clean wave 360. Sifferlen, if most of you might think he’s still into freestyle, is definitely devoted to waveriding nowadays.

Check out the very nice  action shots of day 2: