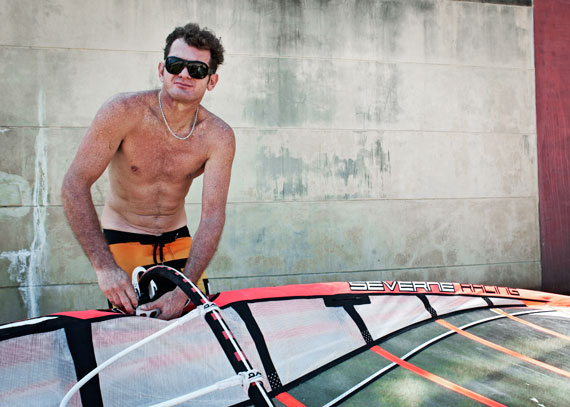 C7: What is the Formula Experience Class?

Remi Vila: Formula Experience is basically the same as Formula Windsurfing, but at a very affordable price and durable to help everybody to be able to race and enjoy Formula. From the young age of 12 years to grand master you can really enjoy racing with a big fun factor.

C7: When got FE first started?

Remi Vila: It started in 2001 and the first International event was in Brest, France in 2002. I was one of the guys, who strongly believed in this Class like Marc Cardon who was the main man to start to build the format of this class. The class got a fast start in Europe and in my country. And it became very successful with 50 Formula Experience racers in 2007. And Martinique is a small island with approximately 400.000 habitants only. The result of the Martinique Team was impressive during all these years with a lot of international podium results with names like Julien Ventalon, Thomas Lequesne, Vincent Domergue, Morane & Clémentine Demont, Sébastien Bourdais, Christophe Célimène , Wilson Cadignan and the big name from St.Martin Julien Quentel. 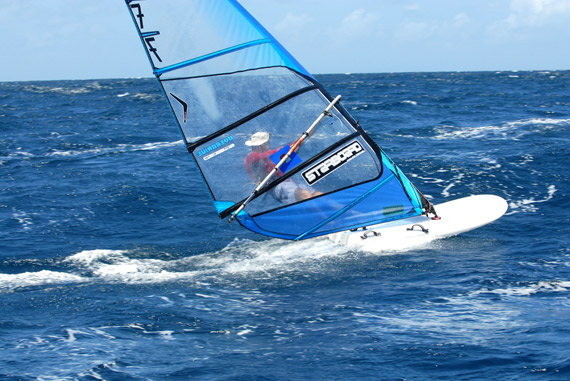 Remi Vila: In 2001 Bic and Starboard were the only manufacturers, who believed in the class, but now it’s almost only Starboard you will find on the water due to the fact that Bic didn’t upgrade their shape in 2006. The previous plan of the Class was a white board, that would allow any manufacturers to be part of the One Design with the same shape, but with different brand names on it. After many years the original plan can come to reality with Starboard & Severnesails. 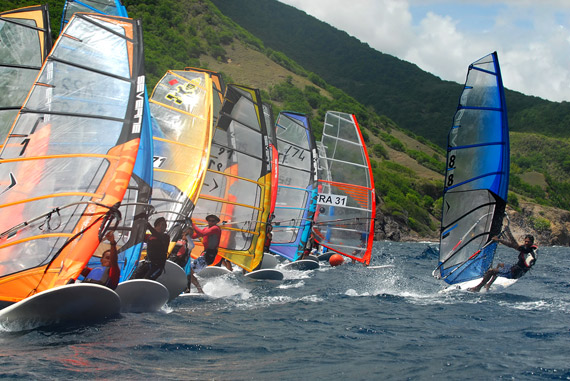 A start of the race with Remi in the center (Pic: Albert Jean-Charles).

C7: You are the president of the class! What are your jobs?

Remi Vila: I take care that the federation around the world understands the concept, which is very interesting for everybody, particularly for the youth. From the age of 12 years on you can race with fun at an affordable price and it stays affordable until you are in the Grandmaster class. Plus don´t forget about the endless fun. For instance a hull with the biggest rig of 11m is approximately 3 times less expensive than Formula Windsurfing Board with the same size rig in Europe and the fun is almost the same. Of course it is also a very good class to discover new talents to continue to the next level with open Formula Windsurfing. The whole set includes a board + fin + foot-straps + mastbase + mast with 75% carbon + mast extension + alloy boom + cambered sail + harness lines + uphaul.

Remi Vila: We have one event for the ISAF World title and one for the European title each year and I can say, that FE is one of the most growing classes right now. South America for instance understands perfectly the concept and racer on this continent want to race on gear at an affordable price. And there are a lot of other countries, who have a lot of racers, who want to race, but are not on the top level or very rich.

C7: How many members does the class have in the moment and in which country are the most sailors registered?

Remi Vila: Right now the best country is Brazil with around 100 sailors, who practice.  But other countries from South America have great numbers as well like Peru, Chilie, Mexico and some from Europe.

C7: How many countries support the class already?

Remi Vila: We have already 11 national members, which follow us.

C7: Formula Experience Class just announced the news, that the FE class will become a one Design Class from 2012 on. Is this a step forward?

Remi Vila: As I said it was the original plan in 2001 and now the Class is ready for this step. I believe that it will be a great step forward, already fully accepted by South America. And Europe should be very interested about this as well. Out of my view it can be promoted much easier. Plus One Design gives really the chance to all competitors to show their real value on the race course. 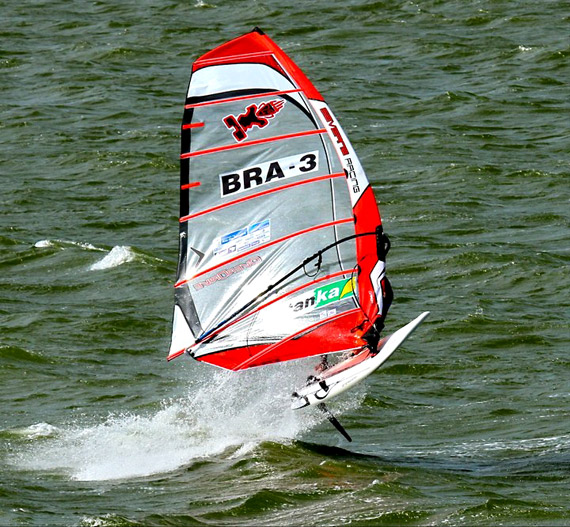 The takeoff with the brandnew designed gear at Brazil (Pic: FE class).

C7: What was the reason that the Formula Experience Class could be announced as a One Design class?

Remi Vila: It is more easy for the federation to promote a One Design Class, because they always want to give their riders the best chance to show their true value and less complicate for clubs or parents to invest.

Remi Vila: Due to the crisis the Formula Windsurfing suffered in 2010. Less events were held. But it looks like Formula Windsurfing will see a real comeback with many events next year in 2011. Formula Experience will be more like the first step for Formula as the class name clearly explains. It should help to arrive at the top level through the Formula Experience class and continue in the top class, the open Formula windsurfing class. But the most important goal of FE is to get as much people as possible into the racing discipline. And this will be possible at an affordable price.

C7: Can the FE gearset compete with a open class set in the same size? Or better said, can someone win with the FE set a competion against a gear set in the open Formula Class?

Remi Vila: We see already many times racers, who race together and it often happens, that Formula Experience racers finish in front of the Formula Windsurfing racers particularly in the youth category. This fact just shows one important thing: you don’t need to invest so much money to enjoy the Formula racing discipline and be competitive at the same moment. But of course Formula Windsurfing has more overal performance, but with much higher costs.

C7: When got the FE board developed (year), which will be the One Design board for 2012 or will the current board be modified?

Remi Vila: The board will be the Starboard F160, which is already on the market since 2006 and will be not modified. We don’t want to push all the riders, who already have the board to buy another one. So we keep it as affordable as possible. This board proved already that it is a good one for all the categories  from the very young racers up to the grandmaster. 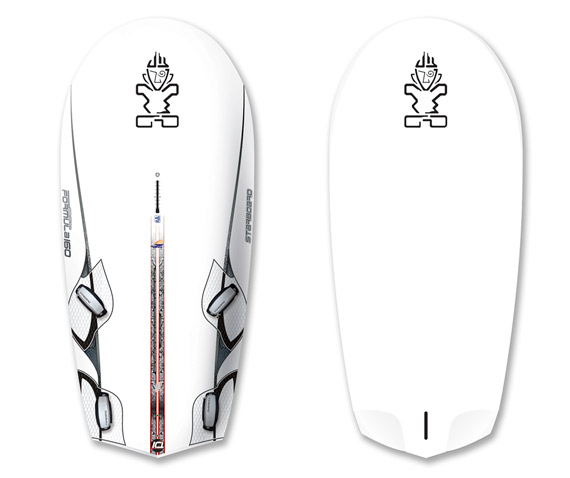 The Formule Experience board (Source: Starboard).

C7: And what will be the One Design rig?

Remi Vila: The rig will be the Severne Overdrive 2011 as a One Design rig, which will be kept the same during the next years like the board. 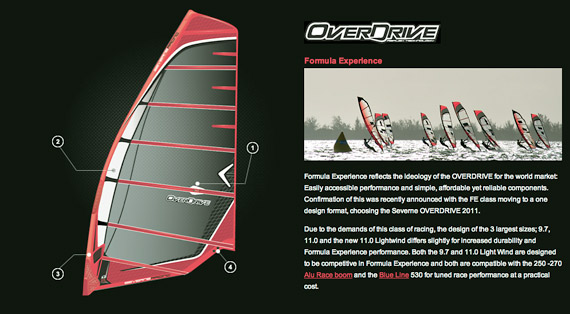 The Severne Overdrive, the sail for the Formula Experience Class (Source: Severne Racing 2011).

C7: The FE class has a 160 liter board and a 11,0 m sail as the biggest set. Is there a windlimit and do you see the lighter sailors in advantage or what´s the ideal weight when using the biggest set?

Remi Vila: There are 2 weight classes. So this will not be a problem. But the sail also made a huge improvement. It´s very powerful in light wind and more easy to handle in strong gusts. The Formula Experience rules allow 2 rigs at a maximum, which can be choosen as following:

C7: Do you see a realistic chance that FE could become the new Olympic class in 2016? Right now the Neilpryde RS:X is the windsurfing class in the 8 Olympic sailing classes.

Remi Vila: It is really not our target to be an Olympic class. We are just here to bring more people on the water, who want to race with an affordable price.

C7: Are there already many races fixed for 2011 in the Formula Experience class?

Remi Vila: We have the Worlds in Cancun, Mexico from the 26th of December till the 1st of January 2012, the Europeans in Portimao, Portugal from the 14th till the 19th of June 2011 and the North Americans at Cozumel, Mexico from the 17th till the 20th of February 2011. The South Americans will be held in Chile, but has to be confirmed. And of course all the National events will take place additionally. And there are many!

Hello Can I participate in the board FE national races held in the classroom FW? I am 15 years old, the country – Russia.

Hi Remi Vila and all FE,

The Cozumel North American Windsurfing Championships 2011 is getting close.
The regatta will be held at Mike’S Place Cozumel Island Mexico
from 17-20 february.
Visit http://www.windsurfmexico.com for registrations.
Hope to see all down here, don’t miss the oportunity to sail the warm maya caribbean breezes.
Same conditions expected at the Cancun Worlds 2011
Best
Miguel Pani Can
President
Mexico Windsurfing Association

I guess, I can say the same about spending 1500 euros for a single fin.

I won’t say that FE is as fastest and confortable as a FW equipment.But the racing is much closer and at the end of each reace is the better (not only the one with better equipment) the one that take the victory.

formula with 75% mast and with an alloy boom is pointless

Awesome, I can´t wait for next seasson. Last one was so much fun.