While the last weeks there were several news going concerning new products on the racing scene. Obviously windsurfing with taggerboards, what is an obligation for Olympic racing so far and keeps the wind limit down, is still an interesting field for several companies. Especially the brands NeilPryde, Starboard and Exocet invest a lot of time in development of new products. Read more about the latest products.

Starboard recently announced their latest product, the Phantom 295. Remi Vila, head of Starboard’s racing program visited the UK some weeks ago to let some junior windsurfers try out the new Phantom 295. The idea is to run a new all-in one interbational windsurfing class. The class positions itself as a feeder to many other established class: the Formula class, the RS:X, the Raceboard or probably the Funboard class in the Slalom discipline. 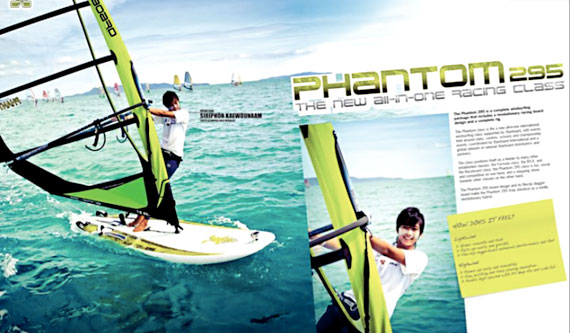 Remi Vila, the designer and former Raceboard world champion, commented the development as following: “For the last two years we’ve been working on a totally new design with bat wings that help reducing drag in light winds, but also facilitate earlier planing as soon as the winds pick up. Another detail is the angled mast track which is higher for up-wind courses in dagger board mode to increase leverage the one needs to get on the rail quickly. Setting the mast track lower like an iSonic, will increase control in planing mode. These design elements give this board a broad range of performance advantages and a high fun factor. Specially designed for the youth before they get on an RSX, a raceboard, slalom or formula board. Have fun with the new hybrid generation!” 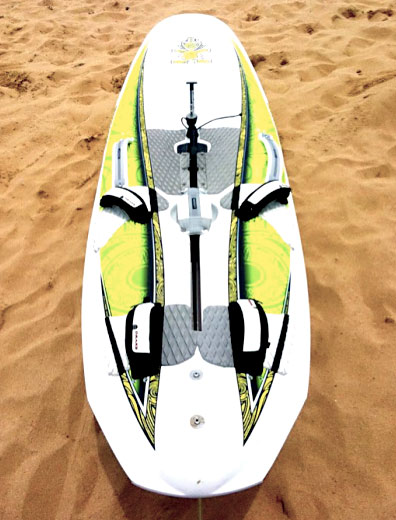 Check out the following clip:

The Youth Flying Machine from Remi Vila on Vimeo.

We also must add the Starboard Phantom Race 377, which is the extreme version of the Phantom 295.

“Progress in light winds and windy condition was impossible until now, but after 2 years developement this came possible. It’s somewhere an impossible engeniering. With the bat wings, which start from the mast track, the Race board has a very low drag in lighter winds. But also this wings- they are like another daggerboard – help you to increase your up wind angle. The mast track also is very high in ligther winds to help you to get and keep the board on the rail. The new raceboard almost planes like a Formula board. This is possible because of these bat wings, which increase the planing surface. So it´s much more easy to get on the plane and you can very deep down wind. The mast track is very low in this position, a bit like the iSonic, to increase your control of this long board. All together the board delivers hi-Performances in light, medium and windy conditions combined with a lot of fun. To increase the comfort and durability the board is now built in a full Biax Carbon construction”, Remi Vila, the designer, explained us.

Watch the video Remi Vila is testing the board in 7 to 12 knots:

Patrice Belbeoch, the director of Exocet and former PWA Worldcupper, also came up with an extremely innovative raceboard concept, the RS D2. Have a look on the following clip edited by Eric Bellande. Perhaps the concept is too far away for a funboard windsurfer, but looks revolutionary as well. Sometimes a sport needs crazy ideas to get developed even more. Jibing looks definitely very tricky!

NeilPryde developed the RS:X Evolution, a proposel for the Olympic Games in 2016. The current Olympic equipment for the games in 2012 is also designed by NeilPryde and called RS:X. NeilPryde also developed a concept for the youth under 20, called RS:One. Robert Stroj, NeilPryde´s saildesigner and Patrice Belbeoch, the director of Exocet developed rigg and board. “The first test feedback from the NeilPryde team confirmed the thoughts shared with my son Cedric and other, young Bic Techno OD 293 athletes. The RS:One performs incredibly well in all kind of winds”, Patrice explained.

Watch Pieter Bijl and Antoine Albeau testing on Maui the new developed RS:X Evolution! Looks like they are having fun. Perhaps both are Olympic candidates for 2016?

Or watch Antoine Albeau racing at the NeilPryde racing series at Dunkerque, France.

So let´s see, which products will be the winners in the upcoming years and if windsurfing will stay an Olympic Class.

Hideous graphics on the 2012 pryde sails. Everything else is cool.

To me the Exocet board looks like it got some inspiration from the Starboard Serenity. “Just” added gliding ability. Would be nice to the some real non-gliding footage compared to other raceboards.

Hi Dennis,
you mean the Exocet creation. Out of my view it can be discussed how far windsurfing can go. The firts creations of windsurfing boards looked weird abit if you remember the board of Newman Darby, built in 1964. A kind of a Formula board already. Jim Drake and Hoyle Schweitzer were alreay really close to what we use today.
Check some Pics of Newman Darby´s constructions: http://windsurf.mediaforte.com/darby/picture.html