There is a nice story about the testing and developement of the Starboard Quad boards online on the website of Starboard. 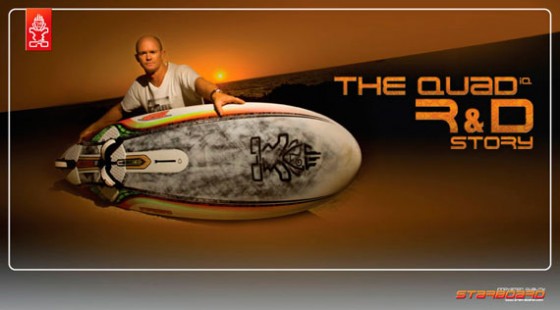 “This year’s Quad development was once again an ongoing process, which incorporated all the feedback from the previous generation, which was also the inaugural generation of the quad.

Scott McKercher, head of wave board development, was loving the power being generated by the first generation Quads. For example, he talks about the boost out of the lip that is pretty much unequalled in any board the team has ever tried. But it didn’t have as good a vertical pivot in the lip type rotation. All it wanted to do was boost. Another was the fact that all the bite it provided through a turn didn’t enable the release type new school maneuvers like Takas and Backside 3s.

So from this starting point, Scott’s stage one was a smoother outline without hips utilizing the same fin configuration. A trip to Sumbawa was the test track for this with some pretty heavy waves out at Lakey Pipe. What the team discovered there was that taking out the hip with this rocker stiffened up the board too much, so some added rocker between the feet was needed to counter that….”

Read the rest of the story including pictures here on the website of Starboard.