A massive storm from southwestern direction pumped up masthigh waves  towards the beach of Westerland and blew with more than 35 knots . We saw two incredible double eliminations, a super happy Alex Mussolini and Iballa Moreno. 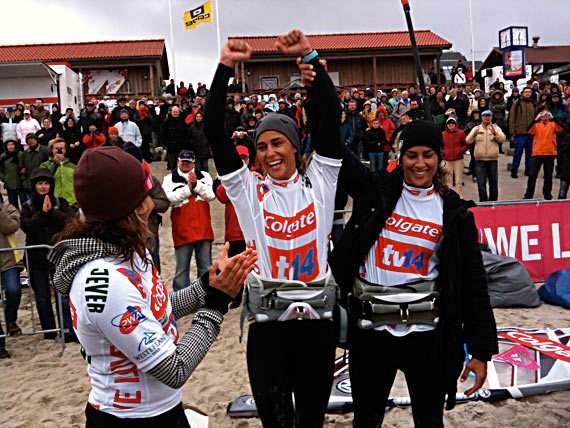 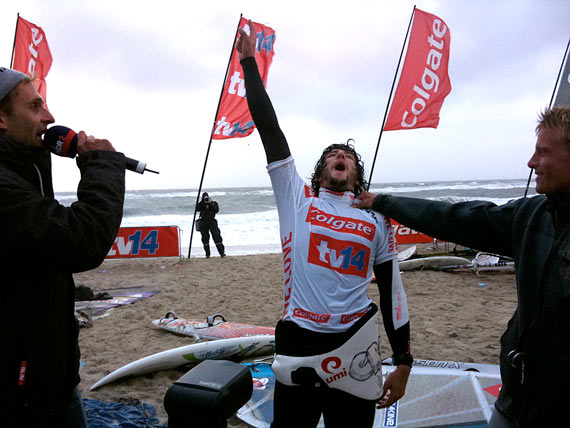 The day started at 7.30 a.m. for the Pro wavesailors. The first heats were 3 ladies heats, where French Alice Arutkin and Evi Tsape from Greece made it into the top 6.

Later on at 8.57 a.m. the first men´s heat got started and brought a big surprise. Although the wind blew from the left handside Philip Köster could not make it through against Gollito Estredo. He perhaps was on a too small sail and the wind dropped a bit. But we are sure, he will be back on top soon!

Some other names from Germany had a great day: Dany Bruch made it through 6 heats and got stopped by an incredible save and strong sailing German Klaas Voget in heat 47. Kauli Seadi, who definitely was one of the overall wave title favourites, also lost his heat against Klaas and only could finish the Sylt event in 9th position. With this drop out Kauli handed the overall title to Josh Angulo. Voget, who convinced in waveriding and jumping – he definitely tweaked the pushloops most and landed the Backies super save – knocked out Denel, Pritchard, Seadi, Volwater, Bruch, Skye, Albeau and Angulo.

Albeau risked a lot, sailed well and had a massive wipe out in the heat against Klaas Voget. 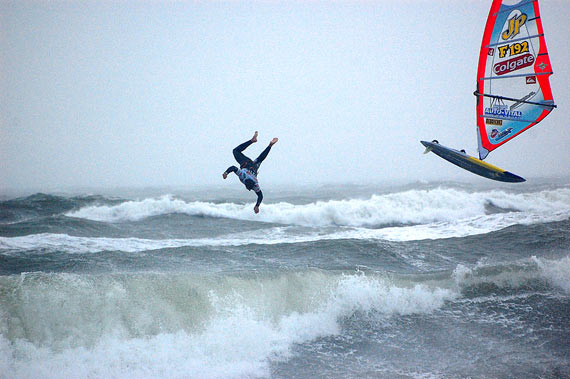 In the 9th heat for Klaas on this day (the heats were 12 minutes long, extremely hard conditions with 40 knots of wind and 4 meter high waves), Alex Mussolini, the winner of the single elimination – was not to beat. Mussolini had very smooth waverides including Takas and landed  a very high Pushloop and a Backloop. “I am the most happy person right now”, he stated his feeling, when the result got announced.

In the ladies elimination. Tsape knocked out Arutkin, but got stopped by a very strong sailing Nayra Alonso, who also made it through against Karin Jaggi, who obviously felt very well in the extremely big waves,  but could not collect enough points. In the following heat Daida Moreno was too good in the jumping category landing a massive Table Top Pushloop, but Nayra Alonso sailed extremely well and had an awesome waveselection. In the final Daida faced her twinsister Iballa. Normally Daida is known as the more radical jumper, but this time Iballa landed a massive Backloop and Pushloop and took the win again.

After these results it looked like Iballa would have taken the overall title in the waves, because she could win the last event of the year. But for some reason the PWA announced a resail for the overall ranking: “Due to the fact that Iballa has not launched, Daida Moreno will be the overall World Champion.” (Paul Griffiths, PWA Press officer) The results from the small final in between Nayra Alonso and Karin Jaggi for the overall ranking got not announced yet.

Overall it was a great day of wavesailing with incredible high jumps, wild waverides and a lot of riders, who came physically to their personal limits.