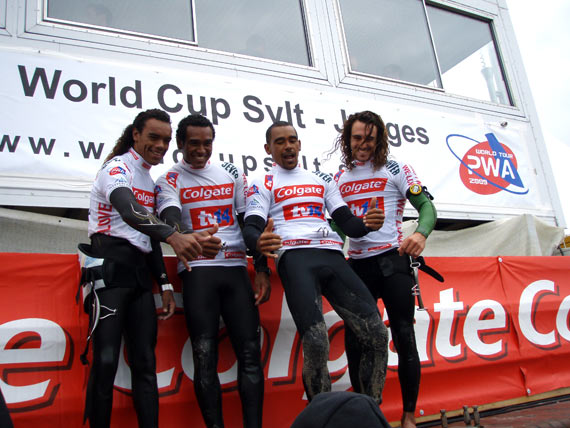 Some minutes before 8.00 am the first heat of the first single elimination got started. The light onshore wind conditions and 1,5 m high waves exploding in strong shorebreaks made it hard for all sailors. The conditions were extremely difficult. The riders had a hard time to show their programm within 6 minutes.

Normen Günzlein, one of the heavier sailors, struggled in the light conditions – 10 to 20 knots – and could not made it into the second round. Phil Soltysiak had bad luck and dislocated his shoulder while the heat. “It took me quite a long time to get to the hospital. The doctor pushed with his foot against my rips and pulled my arm to get the shoulder inside again,” the cool Canadian stated, when he was back on the beach again after his visit in the hospital. See here the short clip:

The conditions stayed tricky and the wind never really picked up. There were just more stable gusts in between and sometimes a light rainshower passed by. In the quarter final Taty Frans kicked out Gollito Estredo by a very close decision. Taty sailed very aggressive and super save. Gollito definitely had not his strongest heat. Marcilio Browne lost against a strong and fluid sailing Tonky Frans. Kiri Thode sent a good sailong Andre Paskowski back to the beach and Nicolas Akgazciyan, who has obviously well recovered from his foot-knee injury from Lanzarote, kicked out Egor Propretinsky.

Three sailors from Bonaire made it into the top 4. Taty took the victory against his brother Tonky and Kiri made it to the final against Nicolas.

In the loosers final Nicolas looked underpowered and Tonky had great airtime, landing a perfect backloop and a fully planned forward. He made it on teh podium.

Heat of Kiri in the Final: 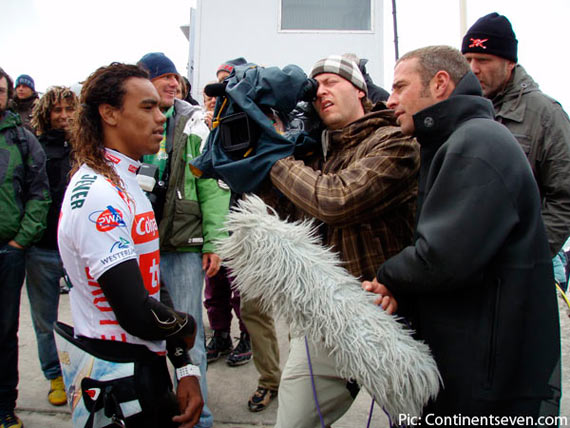 The winner gets interviewed