Day 4 at Sylt saw no wind, but some clean swell with an exciting SUP Team contest and just before sunset an exclusive Tow Wave session with some of the biggest names of the windsurfing pro-scene. 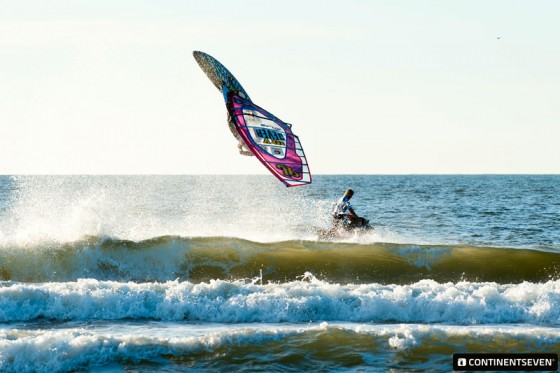 The windforecast was very bad for the 4th day at the PWA Worldcup final here at Sylt. The riders had to show up at 10.00 for the skippersmeeting to get briefed for the day. But we saw warm sunny weather conditions and excellent waves at the Brandenburger beach at Westerland, Sylt. Many pro windsurfers decided to borrow SUP boards from the Fanatic and Starboard booth or ride on their own shortboards like Dieter van der Eyken or Steve Allen. 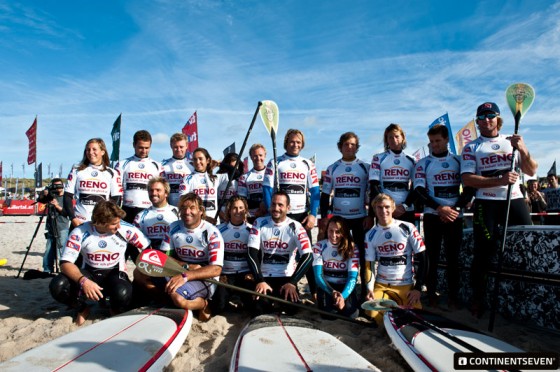 At 4.00 pm the organisation started a team SUP event. A course with 3 marks was set. After a running start the competitors had to battle around 200 m outside the North sea, crossing the impact zone, surfing back to the inside, rounding a mark, paddling out once more, surfing back in and running in the changing area. 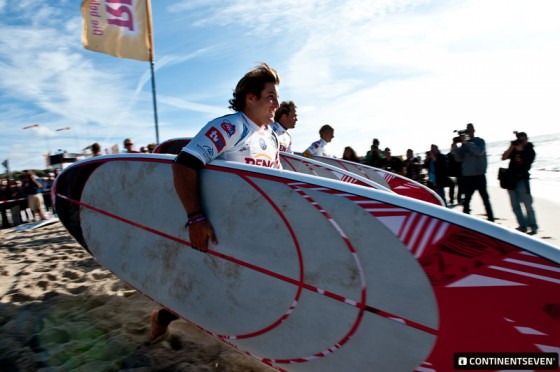 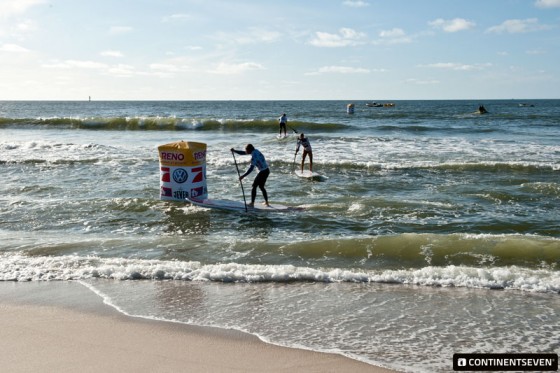 The teams of Marcilio Browne and Björn Dunkerbeck qualified for the final runs beating the teams of Antoine Albeau, Jesper Orth and Valentin Böckler.

“Having battled through the surf and around the treacherous race course once already the competitors looked a little tired, but that didn’t prevent them from giving it their all. Marcilio Browne delivered another exceptional lap, keeping Björn Dunkerbeck at a safe distance the whole way around the course, whilst Daniel Bruch lost control on a wave. Seadi stole the show with his performance putting the team two legs ahead of the rest. It then came down to Nayra Alonso to keep the lead, she stormed out to the first mark but a powerful wave caught up with her on the way in allowing Iballa Ruano Moreno and Eva Oude Ophuis to catch up, but Nayra Alonso was quickly back up and running and charging towards victory. The super-strong team made up of Marcilio, Kauli and Nayra were awarded their prize money of 600 € on stage in front of the cheering spectators.” (Ed Sinclair, PWA Press Officer) 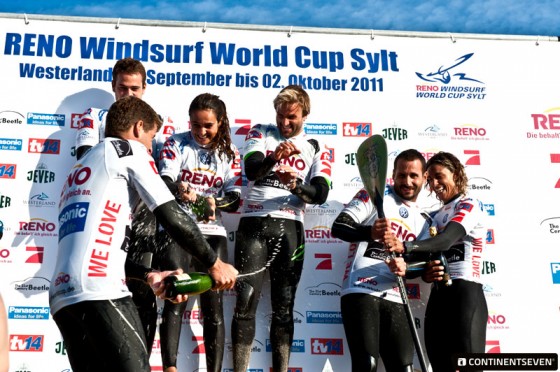 The SUP contest was a proof that many of the top Pro windsurfer s have a really good level in this new established trendsport. But we would say that Kauli Seadi impressed with an outstanding performance the crowds at the beach.

Following the competition the crowds were treated to an incredible wave tow in session featuring Ricardo Campello, Kauli Seadi, Dario Ojeda and Marcilio Browne being towed into the waist high waves by Antoine Albeau. It was not so easy to catch the perfect wave due to the fact that the tide went down and the water was realatively shallow in the impact zone. And the light breeze had not the best direction. But we saw incredible moves like an onehanded Backloop attempt and a perfect Ponch by Ricardo, a perfect Goiter by Marcilio, a crazy Pushloop attempt and an Air-Flaka by Kauli. This tow in into breaking waves was an incredible new idea and has a lot of potential. Probably we are going to see more of this stuff in the upcoming days. Antoine Albeau was definitely a great Jet Ski driver and should keep on going to guarantee the right speed. He definitely communicated well with the riders and had an excellent eye for the best waves. 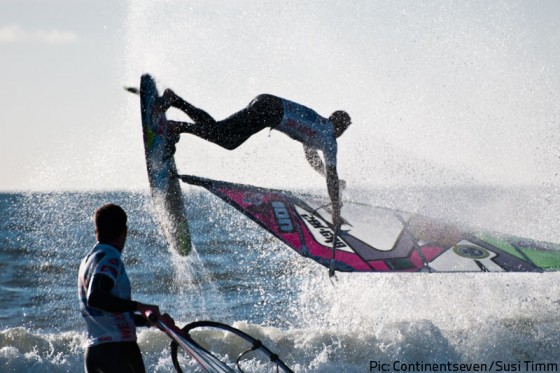 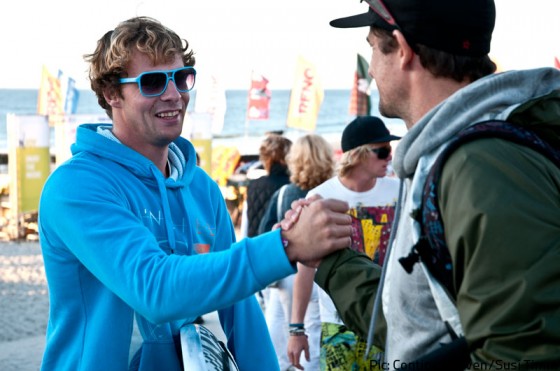 There is some breeze on the forecast for tomorrow and the PWA crew hopes to complete the final heats of elimination one in the slalom, the skippersmeeting for all three fleets will kick off at 10.00 am. If the wind should not fit, there is a Tow-In session planned for 11.00am.