Today was the eighth day of the PWA World Cup on Sylt. After two lay days without any action on the water, finally today, the next slalom races could be started. Two eliminations got finished and both times it was Björn Dunkerbeck, who dominated the race. 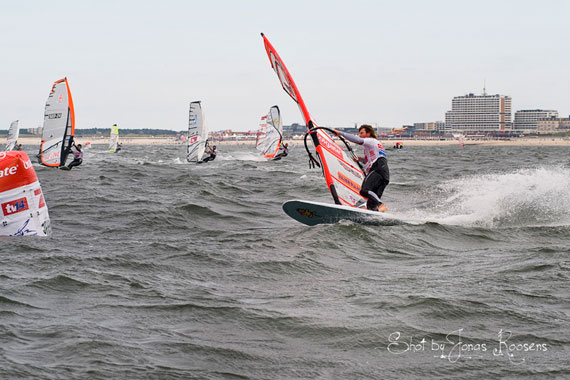 The skippersmeeting was at 10 am in the morning but the wind was too light and gusty to start the racing immediately. Around midday the offshore wind got stronger and stronger and was stable enough to start the second race in 7-13 knots. But suddenly the wind picked up above 20 knots and the sailors had to change to smaller gear. Changing the gear today, was not easy, because the distance from the beach to the starting line was around 1,5 km and it needed some time to get there, because at the first 300 metres off the beach was almost no wind. Many of the top sailors organized caddies to bring a second set to the starting line. Tine Slabe helped Julien Quentel, Dan Ellis was on the second set for Micah Buzianis, John Skye was helping Finian Maynard, Marco Begalli went out with gear from Antoine Albeau and Chris Pressler sailed the second set for Björn Dunkerbeck out.

In the first elimination we saw some big upsets: Cyril Moussilmani could not pass the first round and in the semifinals Antoine Albeau and Micah Buzianis did a premature start, which opened the door a bit for Björn Dunkerbeck, who won this second elimination.

The third elimination was started right afterwards and Björn Dunkerbeck dominated again his heats. Before the losers and winnersfinal the wind dropped and the riders had to change to bigger equipment. Björn Dunkerbeck nailed a good start and could lead the race from the beginning on. Antoine Albeau was on his heels but could not get him and finished in second place and on the third place came Jimmy Diaz.

If we look on the overall result, there is Björn Dunkerbeck on top with three victories out of of three races, followed by Antoine Albeau with two second places and a 9th. On the third position is Kevin Pritchard, who got two 5th places and one 12th. The windforecast for tomorrow is very good, with the same winddirection, but stronger. The fourth race would bring the first discard and could change the result quite a bit. 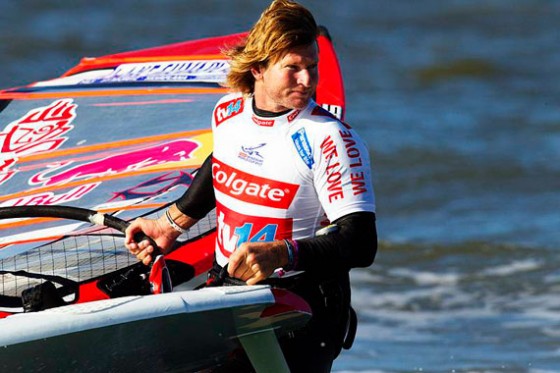 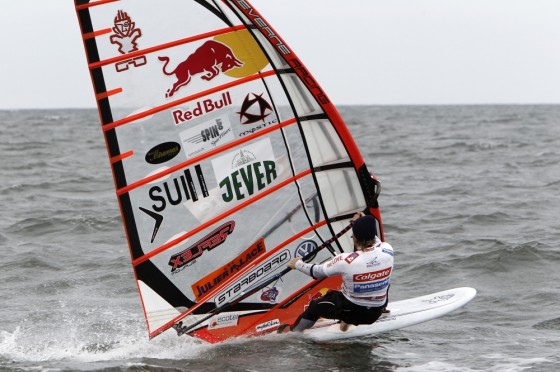