Fourty times world champion, Björn Dunkerbeck claims the final event crown, but it’s Antoine Albeau who walks away with the last race of the season and the 2010 title! Gollito Estredo takes the victory in the Freestyle Single Elimination and in the night session and proofs with these two victories on Sylt, that he is the rider, who deserves the Freestyle World Champion title. Unfortunately we didn´t see any wave action during the 10 eventdays. 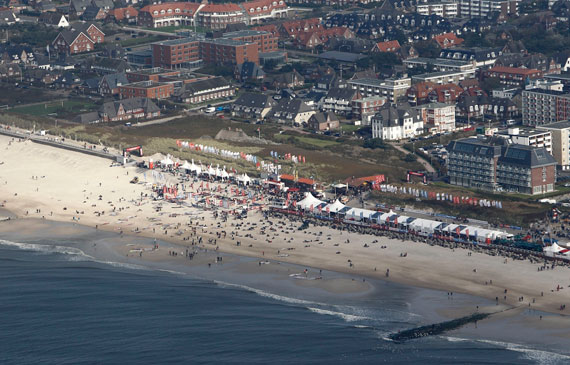 With the possibility that the wind would be more suitable for the discipline of freestyle on the last day of competition, the world’s most tricked up windsurfers arrived at the beach at dawn, only to be greeted by almost exactly the same conditions that had prevented them from taking to the water the past few days. Offshore and gusty wind. The head judge decided to release the freestyle fleet and to start Slalom.

The first winner’s final of the day was arguably one of the most exciting seen this season. All too often, we witness the newly crowned world champion, Antoine Albeau (JP, NeilPryde) or the legend Björn Dunkerbeck (Starboard, Severne, Mystic) leading from the start, controlling the pack as they hammer their way round the course at full throttle, and then crossing the line with a fist in the air. Race six however was completely different! 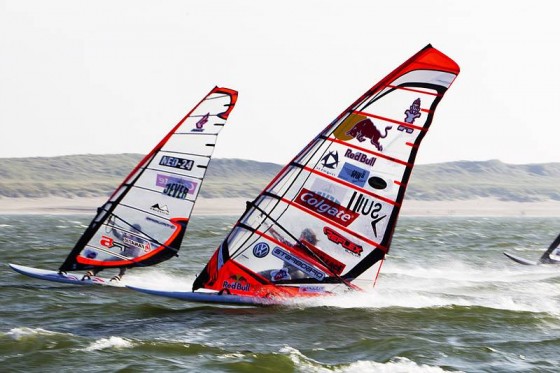 Both Albeau and Dunkerbeck were buried at the beginning allowing the PWA’s president, Jimmy Diaz (Starboard, North) to have his moment of glory. Diaz lead the pack around the first mark, but unfortunately for him, his team mate, Cyril Moussilmani (Starboard, North) was hot on his heels, and halfway round the race managed to sneak his way past to take line honours.

Meanwhile, Albeau and Dunkerbeck were having their own battle out the back. And, despite those battles not being with each other, their final finishing positions would none the less determine their overall event standings. Dunkerbeck fought his way through the fleet, using his outstanding speed to eventually be within touching distance of Diaz, and finished a split second afterwards to take third. Albeau battled hard throughout the heat, but was fighting a lost cause with Dunkerbeck out in front. A fifth for the current world champion saw him comfortably in a top two position, but the thirty-five times world champ had already secured the Sylt crown. 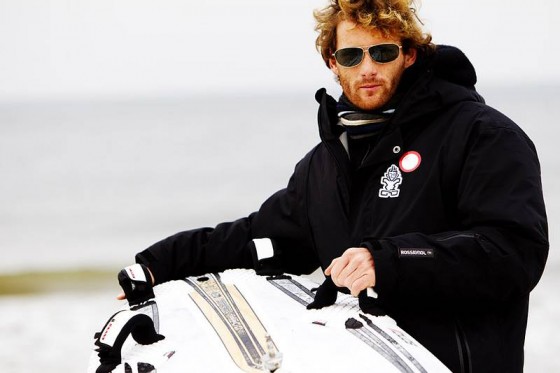 The Race For Third Place between Cyril Moussilmani and Finian Maynard
With the event results, and the overall rankings already decided for Dunkerbeck and Albeau, the real battle in race seven was for the final spot on the podium. Two sailors had the possibility of claiming third place, and the same two third overall. And to top it all off, they both happened to be lined up next to each other in the final race of the season!

The two in question were 2009 runner up, Finian Maynard (RRD, Gaastra), and flying Frenchman, Cyril Moussilmani. Moussilmani happened to be on a roll having claimed victory in the previous elimination, whereas Maynard was recovering from a complete shocker after a broken fin saw him exit the last race in the quarterfinals.

When the gun went, you could feel the tension that had been building on the water all the way back at the beach. Maynard burst into the front of the pack, and held his ground. But, just as it looked like he’d done his job, disaster struck. Moussilmani rounded the mark and couldn’t pump onto the plane, leaving the race director with no choice but to cancel the heat.

In the re-run, Maynard and Moussilmani were neck-a-neck (but not in the lead) in an all-time showdown for that final podium spot. However, once again lady luck wasn’t on Maynard’s side, as a small collision between the two sailors saw them swimming at one of the buoys. Moussilmani leapt back on his board and raced off into the distance to claim his place next to Albeau and Dunkerbeck, whilst Maynard was left to regain his composure. 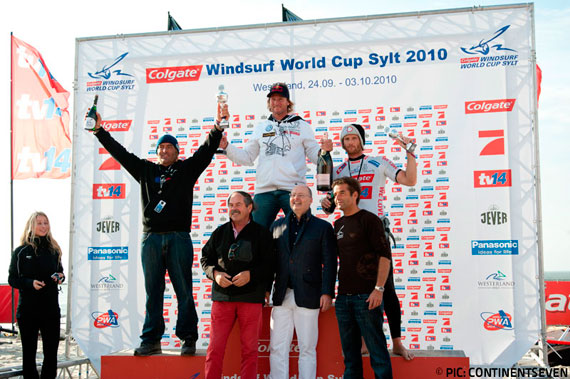 FREESTYLE
Head judge, Duncan Coombs made every effort to get the double elimination going in the gusty winds by doing everything within his power to please the competitors, but it just wasn’t meant to be. This left the results unchanged from day three when the single elimination came to its conclusion. 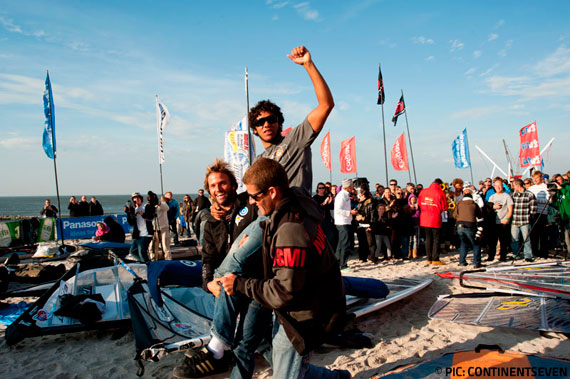 WAVE
Due to the lack of sufficient wind and waves, neither the men’s or women’s fleets hit the water this week leaving the overall rankings unaffected by Sylt.

Women
The absence of a result this week means that the 2010 women’s wave rankings were decided on just one event in Gran Canaria where Daida Ruano Moreno (Starboard, Severne) once again proved she’s the woman to beat with an outstanding aerial display, and some great wave rides. Her twin sister, Iballa Ruano Moreno (Starboard, Severne) finished a close second, with the fearless Karin Jaggi (Patrik, Severne) claiming the final podium spot. 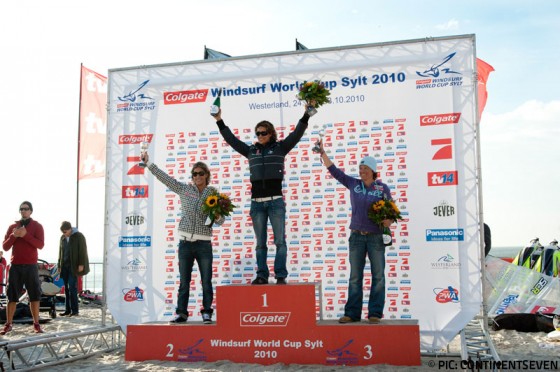 Men
The men’s wave fleet have one final opportunity to prove their worth in 2010 at the hardcore destination of Cabo Verde in November. But, leaving Sylt without a result does mean that there will now be no discard for the year.