The second day of the Kia Cold Hawaii PWA Wave World Cup, the second event of the 2010 season, saw a great comeback of some riders, who did not finish that good at the first event of the season in Pozo. Kauli Seadi, former PWA Wave Worldchampion, made it on the top winning very close against a very strong sailing Ricardo Campello. Another former wave worldchampion, US waverider Kevin Pritchard also fought strong in the battle for the podium and just lost with some points to Dany Bruch, who made it in third position. 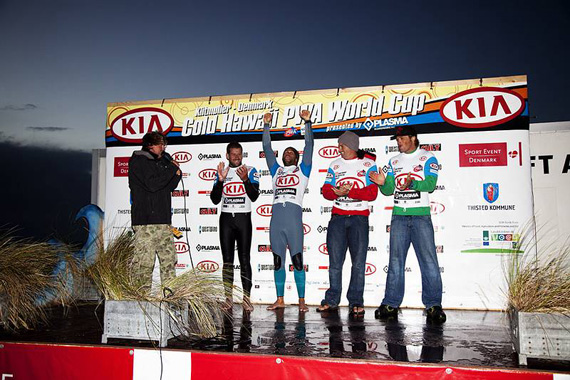 Day 2 saw 48 riders fighting for the best possible airmoves and waverides in their 12 minutes long heats. Overall 25 heats were completed to have a winner. The condition were extremely tricky and we saw some upsets in the second round already. Marcilio Browne lost against 2010 Freestyle worldchampion Gollito Estredo. Camille Juban, who seemed to be well prepared after competing at the Reunion Wave Classic a week ago, kicked out current wavetour leader Victor Fernandez. Both top sailors, Marcilio and Victor, must now try to have a comeback in the double elimination.

No local sailor made it through the second round, but many riders from the Canary islands or living on the Canaries passed round 2 easily: Bruch, Köster, Mussolini, Ojeda, Ceballos, Skye.

The conditions were very tricky today with shifting winds and a big variety in the windstrength. The sailors had to change their sets often, also while the heats. On the picture below Kauli Seadi is changing his set to a bigger one. 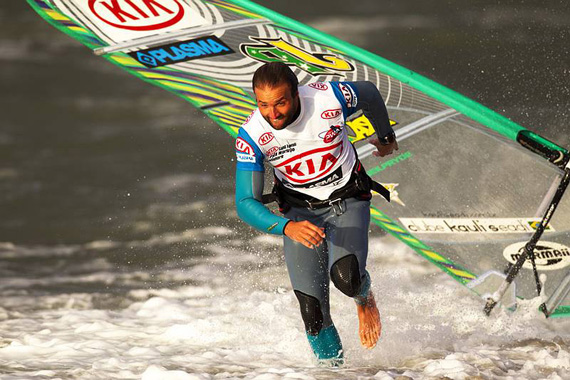 “Rain squalls and strong gusts hammered their way through the contest area every half an hour causing havoc with the sailors who found it hard to choose the correct gear. 5.7s and 5.3s were the sails of choice for the bigger guys, whereas 5.3s and 4.7s were the weapons used by those a little lighter. Board choice was extremely open and purely down to weight and personal preference with single fins, twin fins, trailer fins, thrusters, and quads all seen scattered on the stones throughout the day”, Paul Griffiths from the PWA described the situation.

The third round: Seadi and Swift sent Ojeda and Ceballos back to the beach. Pritchard sailed strong and could defeat Juban. Campello was too strong for Kai Lenny. Bruch, Köster, Mussolini and Skye made it as well in the top 8.

Round 4 brought tough fights. Dany Bruch defeated Philip Köster, who impressed at Klitmöller with perfect 10 points double forwards. But this was not enough to win against Bruch. Campello was in favour of the conditions and made it through against last years Sylt winner Mussolini. Pritchard surprised again and defeated John Skye. Seadi could beat his teammate Robby Swift. Ricardo kept on taking a lot of risk in his airmoves and made it to the final against Bruch. Kauli Seadi, who knew of the qualities of Pritchard, kept the nerves and made it to the final, too.

In the final Kauli had nice waverides with powerful topturns. Ricardo landed a powerful double forward and had solid waverides, too. It was a close heat, but Kauli could take the victory. “I’m super stoked to have won especially against Ricardo in the final. He had a really good double forward so I was a bit scared about the result, but I knew I’d scored two good waves. It feels amazing to be back on top after my poor result earlier this season in Gran Canaria, so I’m really happy right now.”

In the B-final Dany Bruch convinced with very nice waveriding, including Takas. Kevin had an excellent wave selection as well. Bruch landed perfect Backloops and in the end he convinced the judges more and made it on the podium.

Result after the single elimination: