Prepare for breakneck speeds and cunning tactics as the PWA’s fastest race fleets descend on Ulsan’s Jinha beach for the opening round of the 2010 slalom season. From May 15th through to May 21st an elite group of windsurfers will battle it out around the buoys to make their mark on the first stop of the 2010 PWA slalom world tour. 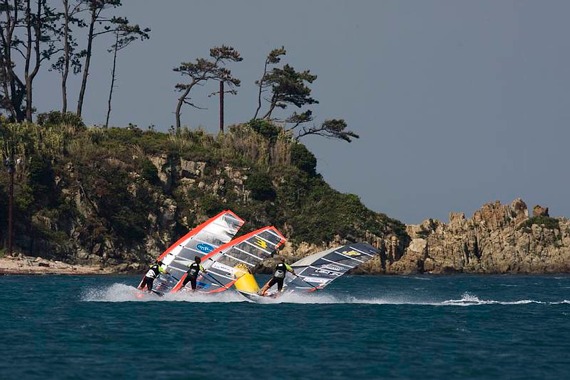 The beautiful beaches around the town of Ulsan will provide a dazzling backdrop to the fierce competition that will be taking place on the tropical waters of the Sea of Korea.

We wouldn’t expect anything less than for the undisputed champion of modern slalom, Antoine Albeau (JP, NeilPryde), to be firing on all cylinders and to clean up at yet another event. He’s dominated the racing scene in Korea for the past two years, and hasn’t dropped out of the top 3 for as long as we can remember, so we doubt he will here.

The only people to have knocked Albeau from the top spot at an event over the last four years, and have the serious potential to do it again, are British boy racer Ross Williams (Tabou, Gaastra) who beat him in Podersdorf last year, the terminator Björn Dunkerbeck (Starboard, Severne) who took honours from Albeau in 2008 at both Alacati and Sylt. And, Kevin Pritchard (Starboard, Gaastra, Dakine) and Micah Buzianis (JP, NeilPryde) who finished first and second respectively at the first ever PWA world cup in Ulsan during 2007, leaving Albeau to settle for third.

Also in with a chance of claiming a place on the podium is heavyweight speedster, Finian Maynard (RRD, Gaastra). Following an impressive run of events towards the back end of last season, Maynard climbed the ranks to finish second overall. With a new sail sponsor to impress and plenty of determination, you can count on him hitting the racecourse hard this year, starting with Ulsan.

Another name whispered through the wind is that of flying Frenchman, Cyril Moussilmani (Starboard, North). He notched up a few podium finishes last year, and we’ve been told by more than one source that he’s up to speed and ready to make his mark.

The ongoing battle between Switzerland’s amazingly successful world champion Karin Jaggi (Patrik Diethelm, Severne) and the fierce French champion Valerie Ghibaudo (Tabou, Loft) finally tipped in Ghibadou’s favour last season, with her taking three straight bullets and the world title. As it stands, Ghibadou is yet to enter Korea, leaving the doors wide open for the legendary Jaggi to claim an early lead… That is if the likes of hardened young racer Sarah Herbert (Starboard, Naish sails) and freestyle world champion turned slalom racer Sarah-Quita Offringa (Starboard, Gaastra) allow her! Herbert had a successful season in 2009 scoring higher than Jaggi at the final event in Alacati, perhaps she’ll claim her first crown in Korea. Offringa entered just one round of racing last year, as a bit of taster, and finished ahead of both Jaggi and Herbert. Being used to toppling seasoned pros off the top spot surely makes Offringa a likely contender in Korea.

Check out which names are on the starting list in Korea: www.pwaworldtour.com

medea2010-05-16T23:35:29+02:00May 14th, 2010|
Subscribe
0 Comments
Inline Feedbacks
View all comments
This website is using Google Analytics. Please click here if you want to opt-out. Click here to opt-out.
0
0
Would love your thoughts, please comment.x
()
x
| Reply
We use cookies to ensure that we give you the best experience on our website. If you continue to use this site we will assume that you are happy with it.OkNoRead more