The event on the Canary island of Tenerife is finished. Around midday the double elimination got finished and Philip Köster and Daida Moreno could hold off their contenders, although they made it not easy for them. Dani Bruch, who already had won his heats against Mussolini, Seadi and Stone, was ready to take away Philip´s top spot and won the first double elimination final. So did Iballa. With impressive waverides she won against her twinsister Daida. But in the re-runs of the winnersfinals the two single elimination winners Philip Köster and Daida Moreno, could convince the judges more and took the victory. 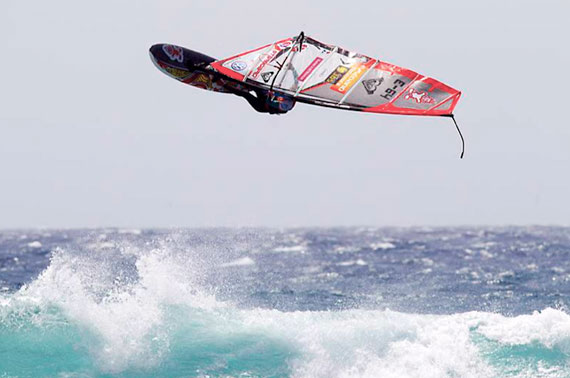 Daida taking a lot of risk despite she had a dislocated shoulder yesterday (Pic: PWA/Carter 2011). 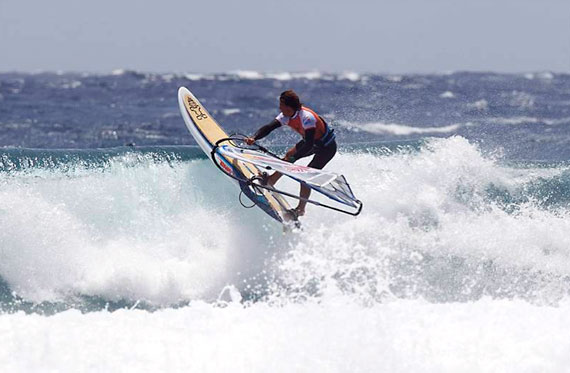 Philip made it in the second attempt against local Dany Bruch (Pic: PWA/Carter 2011).

Right after the heats the announcement of the winners took place in the tent on the beach. The winners got bottles of champagne and definitely had fun celebrating their success. It was nice to see the positive emotions!! 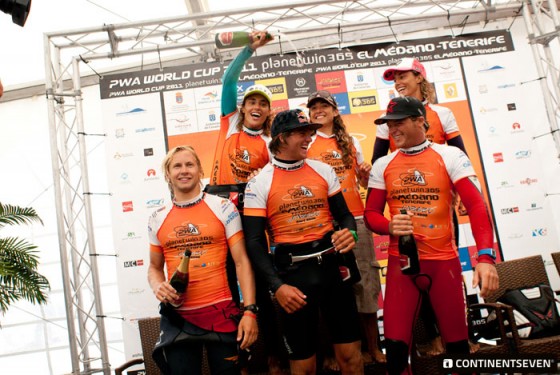 The PWA already updated the overall ranking after two events. In the girls category Daida leads in front of Iballa, followed by Nayra Alonso and Karin Jaggi. Evi Tsape (5th ) and Laure Treboux (6th) are definitely the ladies, who could fight for the podium soon.

In the men´s ranking 17-year old Philip Köster dominates the wave tour so far with two wins. In second follows Brazilian Kauli Seadi, who perhaps has the most unique waveriding style. He is in 264 points distance to Philip. Two or three more events are to go, which can change a lot. In third we see Ricardo, who has his 27th birthday today. Congrats! In fourth is Pozo local Dario Ojeda, who performs excellent this season so far. In 5th Tenerife local Dany Bruch and in 6th Victor Ferandez, the 2010 world champion, who definitely will try to fight back in the next event at Klitmöller, Denmark in September. Dany and Victor are with the same points, but Dany could beat Philip one time in the final, what puts him in front of Victor.

For day 4 – the wind and wave forecast is excellent – the PWA is going to run a super session! The main competition is finished, but the event not, which will run till the 20th of July!

I asked myself the same thing and I asked it last year as well with klimoller where they had 2 days to spare.

the events is scheduled until the 20th, forecast for next days looks ok

so why do they only do 1 double elimination in wave? doesnt make much sense, when they do multiple eliminations in freestyle