The wind and waves were still up and allowed the PWA to run a super session at the rocky beach of El Cabezo. Some of the top riders decided to participate in the heats, some not. Yesterday´s winner Daida Ruano Moreno and Philip Köster gave themselve a break after the intense past two weeks. 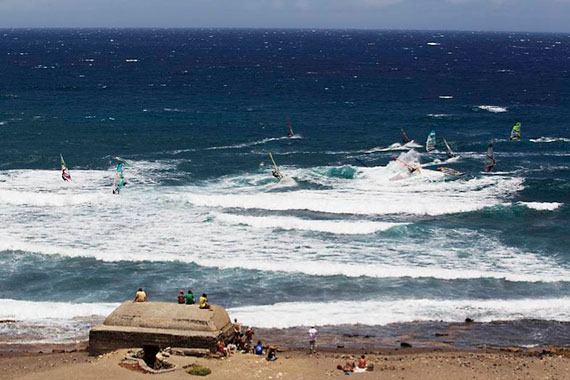 At 14.20 the first heat, of two men heats and one ladie´s heat got started. The heat duration was 20 minutes long.

The best sailors, ladies and men, got judged in two categories: in the jump category and in the waveriding category. For the top ten riders, passes into the legendary Siam water park – famed for its artificial surf wave – were given away.

We saw 2 men heats and one ladies heat:

Ricardo Campello (V-111), Marcilio Browne (BRA-105), Victor Fernandez (V-42) and Peter Volwater (H-24) nailed perfect double Forwad loops over the two meter high ramps. The wind blew a bit more onshore today, with 15 to 25 knots and it seemed to help to rotate with a lot of control. Out of our view Marcilio had his best double Forward at El Cabezo so far! 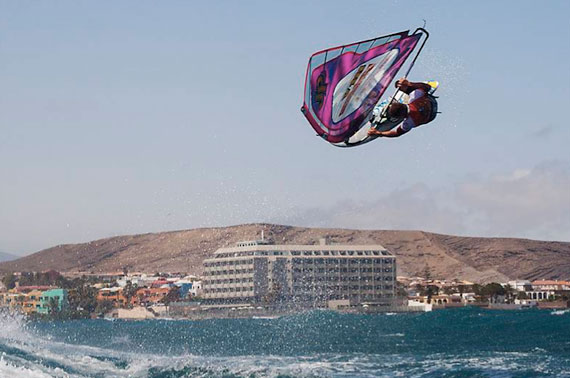 In the waveriding ranking  Adam Lewis (K-516), who lives on the island, convinced the judges most with his Taka on the lip. German Klaas Voget (G-4), who nailed a perfect Frontside Wave 360ty and Brazilian Kauli Seadi (BRA-253), who landed a Backside 36oty also were announced as winners.

The supersession was a bit difficult to watch, because so many people were in the heats and tried to do moves. We also saw good action from younger not so well known guys, like Alessio Stillrich, Aleix Sanllehy or Francisco Garcia. 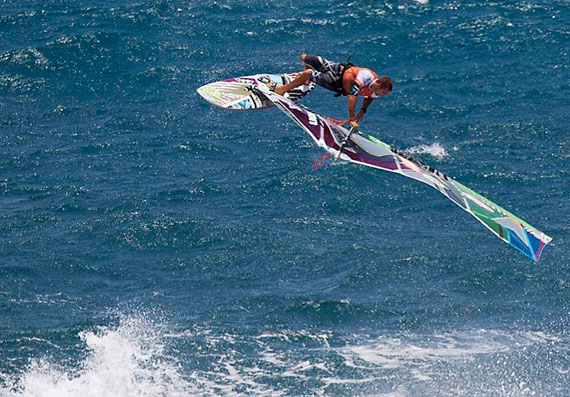 In the ladies heat Iballa Ruano Moreno (E-63) definitely was on fire, with good Forward- and Backloops and even a Goiter attempt. That´s really cool, because we seldom saw Goiters during the last three days. Greek daredevil Evi Tsape (GRE-2) landed a clean Pushloop and Karin Jaggi (Z-14) had a long waveride. 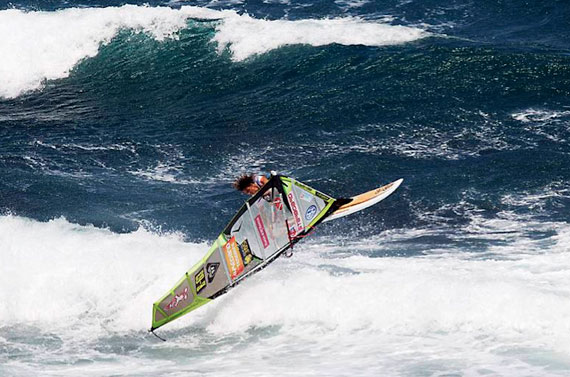 With the results announced and the prizes awarded, the sailors were released for the day in order to relax and catch up on sleep after last night’s beach party.

The windforecast for tomorrow is nice again, but could be one of the last days with this excellent trade winds in the upcoming week. Later the week the wind could drop due to the lowpressure system Nemo, which will settle down over Central Europe.

For all of you, who want to read more detailed infos about the 3 heats of the supersession, Ed Sinclair, PWA press officer wrote following lines:

Men’s Fleet Heat 1
Kai Lenny (Naish / Naish) opened the heat with a super-fast backside 360, shortly followed by a succession of taka’s from Kauli Seadi (JP / NeilPryde) and Klaas Voget (Fanatic / Simmer / MFC). Voget picked up a huge wave out the back and quickly secured his lead in the heat with a perfectly timed wave 360. Not wanting to miss out on the opportunity of a life time Victor Fernandez Lopez (Fanatic / North) stole the show on the jumping front pulling the first double forward loop of the day. Scott McKercher (Starboard / Severne) demonstrated his incredible cut backs on the largest waves of the heat and Francisco Casas Garcia (Starboard / MFC) spent the majority of the heat in the air with his super clean stalled forward loops.

Men´s Fleet Heat 2
With just twenty minutes to impress the judges, the second men’s heat exploded into action seeing new boy to the tour Adam Lewis (Point-7) spin around a super risky taka on the steepest section of a wave to earn him early points from the judges. Alessio Stillrich (Fanatic / North / AL 360) floated around a backloop but was shortly upstaged by Peter Volwater’s (Fanatic / MauiSails) perfectly executed one hand and one footed backloop. Ricardo Campello picked up two waves and rotated around smooth taka’s in front of the judges. The action really picked up when Marcilio Browne (Fanatic / North / MFC) flew around a double forward loop, followed by Campello, Volwater, Robby Swift (JP / NeilPryde) and Martin Ten Hoeve with their own. The heat finished with a final flurry of action as the sailors went for wave 360’s, backloops and pushloop in the closing seconds.

Women’s Fleet
Super consistent Karin Jaggi (Patrik / Severne) opened the women’s heat will a dry forward loop, closely followed by Japan’s Waka Nishida and Iballa Ruano Moreno (Starboard / Severne). Iballa continued her dominance in the heat landing backloops and a stalled forward. Evi Tsape (F2 / North) was a close rival landing a pushloop off a steep ramp. On the wave front, Amanda Beenen clocked up some solid turns however Jaggi picked up the set wave and rode it all the way to the inside blowing the judges away with her slick turns.