Buzianis remains in control despite being pushed hard by Albeau and Maynard, whilst Arrighetti strengthens her lead, but allows Offringa to steal a bullet. 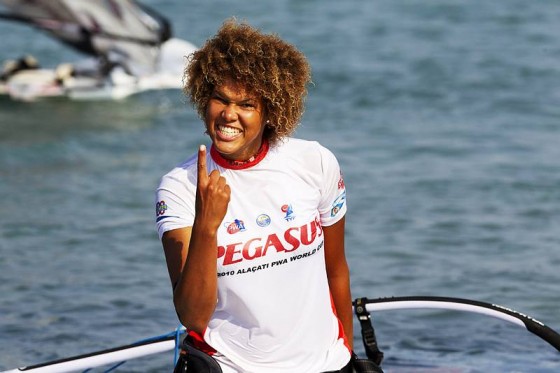 On the second day of racing in Alacati the PWA’s fastest were greeted with wall-to-wall sunshine and a gentle breeze of 7 to 20 knots. Luckily the wind swiftly strengthened throughout the morning allowing the competition to commence in glamorous conditions by midday. Two races were completed for both the men’s and women’s fleets, giving everyone the opportunity to prove their worth. 9.0 to 9.5 m sails and big boards in between 115 and 130 liters were the order of the day when the wind was down, and 8,0 to 8.5m and medium boards were preferred when it was up. Micah Buzianis (JP, NeilPryde) once again posted two consistent results to remain at the front of the fleet. He may not have scored quite the perfect day that he had yesterday, but two seconds firmly consolidates his lead, and makes him the man to beat here in Turkey.

Race one of day 2, the third one overall, saw the return of the 2009 world champion and current tour leader, Antoine Albeau. After a consistent start to the event, he stepped up his game and began to destroy the fleet. A string of firsts saw him happily into the final, and a perfect start had him leading the way. Needless to say, with Albeau in a commanding position he was completely untouchable, and flew to victory in race 3.
After his shock exit in race 2 yesterday, Finian Maynard came back with renewed motivation and won race Nr. 4. 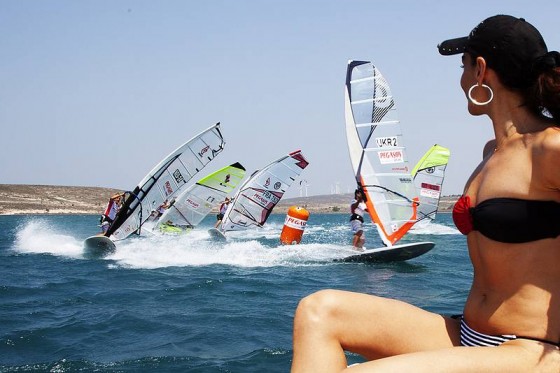 The 2009 world champion, Valerie Arrighetti had an excellent day of racing which sees her sitting pretty at the top of the table. Throughout the first race final she was fighting with the young freestyle world champion, Sarah-Quita Offringa. Offringa flew off the line to lead at the first gybe, but Arrighetti’s experience shone through to take the win.

In the second final, Offringa shot off the line with the same display of speed as the first time round. However, she’d obviously learnt from the previous race and sailed a much smarter heat, blocking any advances from Arrighetti to take the win. It was an excellent day for the three times freestyle world champion, which sees her move up the rankings to within a stones throw of the podium.
Results After Four Races
1st Valerie Arrighetti (Tabou, Loft, Mystic)
2nd Karin Jaggi (Patrik, Severne)
3rd Sarah Hebert (Naish, Naish)
4th Sarah-Quita Offringa (Starboard, Gaastra)
5th Fanny Aubet (JP, NeilPryde)