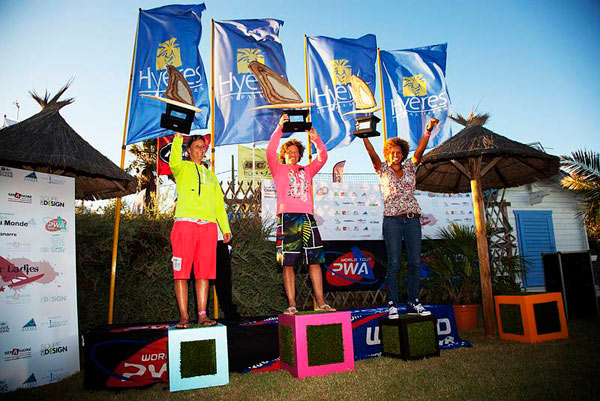 After several days of waiting for wind at Almanarre the wind returned on the final day with 10 knots in the morning and 20 to 25 knots in the afternoon. The PWA racecrew started the first elimination of the 5th day at 11:40. Eventleader Valerie Arrighetti took the victory in the first round of the day, followed by Karin Jaggi and Lise Vidal.

After the first round of the day the wind picked up and the ladies could say good bye to their biggest kit. The young girls saw a comeback in the elimination number 5. Alice Arutkin took the victory in front of Sarah-Quita Offringa and Sarah Hebert. Since South Korea, where the young French sailor could take her last bullet, Alice Arutkin could make it on the top again. Congrats! Valerie Arrighetti did not make it in the winners final this time and scored her first discard. Karin Jaggi finished 4th. 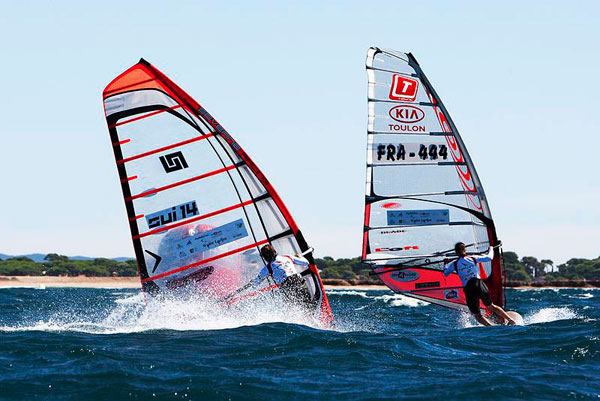 And it should become a hard day: two more eliminations should follow. And Karin Jaggi proofed form: She took the victory in race 6 in front of young French girls Olivia Piana and local Fanny Aubet.

For the final 7th race, which has brough the second discard, the PWA racedirector Aragon decided to run a fullfleet race, which had a long first reach. Karin Jaggi dominated the race again, but could not catch the leader Valerie Arrighetti in the overall ranking by 1,6 points. On the positions of the fullfleet Race Sarah Hebert and young Olivia Piana were following behind Jaggi. Congratulations to Karin and Valerie! And it´s great to see how strong the young girls are pushing for podium results.

Karin Jaggi stated toward s Paul Griffiths from the PWA about her 2010 Slalom title: “I’m absolutely stoked that I’ve won the world title this year, especially with it being on my new Patrik boards. It’s great for us to have won a world title in the brand’s first year. It was really close with Valerie, and in the end it came down to the discard, and the event that she missed. But, I think that’s all part of racing – you have to be prepared to go to all of the events, and give it 100% at every possible opportunity.   I’ve had a great time at this all-women’s final this week, despite starting it off with an illness. The strong winds made today really enjoyable, and the last race in particular was amazing with the very long first leg. I think it’s been an excellent end to a spectacular year on the women’s slalom tour, and this has been the best event by far! It was a little bit unfortunate that it clashed with a few other events around the world, so not everyone could join in, but I hope we can have the same event on the calendar next year, and that everyone will come.   I intend to continue racing on the tour in 2011, so you’ll see me back defending this world title. I’m going to be working on a few extra boards with Patrik Diethelm, so I should have a better set up. And, I’m sure my Severne sails will continue to evolve over the winter, so they should be even better too.”